A hardware geek, passionate about everything that has an electronic circuit. Striving to make the world better with technology. 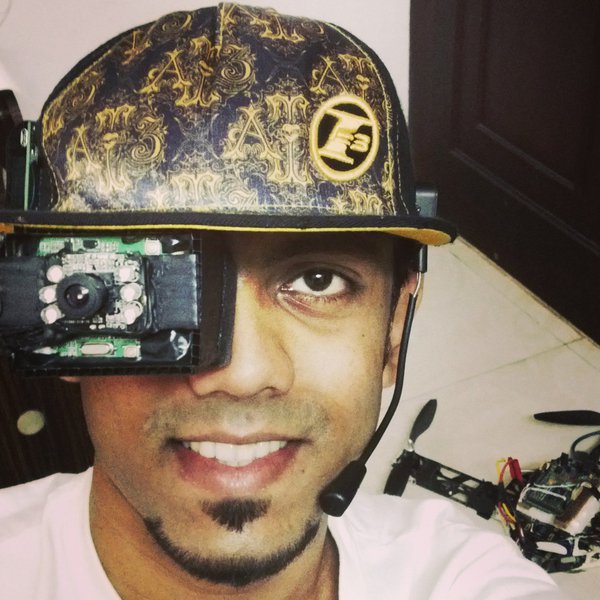 When I was a kid, I usually get rebuked a few hours after my parents buy me a new battery operated toy.They get agitated when they see that I was more fascinated in hacking the toy, be it a RF controlled car or anything having electronics inside it, than playing with it.However, a few moments later ,to their awe , they get mesmerized when they see that I have built something new using the components of the toys: hovercrafts, motor boats, they've seen it all.

I signed up, so that acolytes of hackaday and others can take use of my open hardware projects and build interesting stuff. This platform would help take this initiative to a greater crowd.

8.7k 8.5k 4 33
Sibling of the infamous Rail Gun, a coil gun launches ferrous projectiles at high velocities, that can seriously damage anything in its way!
Project Owner Contributor

I have built a "Smart Cap" , first of its kind , having a head mounted display on it. Here, I will instruct on how to build a monocular wearable display that runs on the raspberry pi as seen in the picture.

Used a raspberry pi, a usb webcam and a smartphone to make a robot , capable of being controlled via the smartphone while streaming video from its onboard webcam in real time.

Internet of Things with Raspberry Pi

In this project, I was able to turn ON/OFF electrical appliances automatically when a person walks into a room.It senses the infra red body heat of the person.

Using this android application you will be able to control your lights, air conditioning, door locks ,etc all from your smartphone. This system uses bluetooth to connect with your device and control the various appliances in your home.

A coil gun is an electromagnetic projectile launcher. It’s more powerful sibling called the Rail Gun is already being tested in military applications, it is also one of the most powerful weapons in the Quake game series.

Electric ignition based Rocket using my own solid fuel mixture

I had created a solid fuel mixture for my rocket using ammonium nitrate , potassium nitrate, sugar ,etc. An electric ignition system is also developed for it, enabling to launch the rocket from a safe distance.

Here, I have created a very easy portable plug and play device which when plugged into any wall socket and LAN connection helps in recording and displaying the power status, power consumption, internet status and internet speed via web interface

Has created a unique Wearable Technology, using which gestures based on a thumb can initiate desired actions on Smartphones, TV equipment and other systems based on MEMS and inertia measurement systems.

Created a GPS based location obtaining module which shows the speed of movement , room temperature, latitude and longitude coordinates and the universal date and time.

Here, I have developed an anti theft system for two wheelers that uses a unique pass code combination for activation, hence eliminating the need for keys. The system after activation also leads on to a GPS based speedometer console.

Here, I have developed a personal assistant IVRS using which you can turn on/off various appliances in your home by using merely voice/speech. The system can also be used in cars to so the same. It is also capable of responding back to the user

Developed a hovercraft from scratch and made it remote controlled at 2.4 GHz frequencies. The controls were using hand gestures, by wearing a glove involving inertia measurement techniques. The system is based on accelerometer data.

Here a quad-rotor helicopter is developed from scratch and an auto stabilization system involving complex attitude estimation and filters have been designed for it, the whole system can be controlled via smartphones.

Successfully developed a system to control all the features of a car using an android application. The hardware and software were designed and developed by me , it is also patent-pending. A patent was also filed for the same.

Create your Hackaday.io profile like Arvind Sanjeev and many others