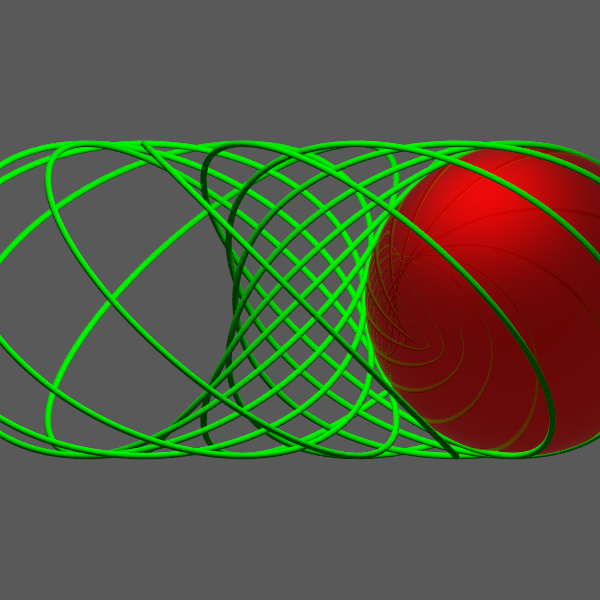 A retired technologist, attempting to connect the dots between my life's compulsions.

An amateur engineer and newbie woodworker.

0 0 0
A torus knot is a helix on a donut. Common 3-axis CNC kits are considered for a low-budget DIY project.
Project Owner Contributor

Discovery: The torus, a donut, can host a line of travel, forming a self-entangled 'torus knot' that is orthogonal with itself --when the knot's torus is profiled with two powers of the golden ratio, and a knot ratio as a Fibonacci pair. 2007

Nesting of Platonic solids finds their vertices at scales of powers of the golden ratio, when the side of a cube is two (2).

Artistic adventures into interference with ray-tracing

Discovery: Interference images carry information repeating fractally as the scale-difference of the interfering patterns is increased to extremes (like ten thousand to one) which are only realizable in a modeled reality (POVRay ray-tracer).

Under tutelage of the Chief Investigator on a funding competition wherein a bevy of defense contractors worked to implement big-data solutions. This proof completed Russian research in cyber security, extending formal category theory.

A 1.5 volt battery, an 8 Ohm audio transformer, and some hook-up wire left my memory scared for remorse when my little brother was used for testing. Poor thing. Late 1960-s

This was a production company project building a machine that batch laser vacuum-welded air-bag crash sensors.

An op-amp compared a D/A ladder output converting a voltage-input being sampled. The hi/low state output of the op-amp toggled a digital counter to count up or down to satisfy the comparison. Breadboarding in the late 1970s

TTL state-machine with pre-sets for control

My first bank-funded-project, co-signed by my Father, established a family business. Early 1970-s

6.8k 126 16 100
A digital VU meter that looks and moves like an analog needle with mass and spring oscillations
Project Owner Contributor

6.4k 3k 0 10
Connect all needed electronics to NodeMCU, add life to them with a help of programming, install HomeAssistant on PC and let's roll!
Project Owner Contributor

5.4k 27 14 36
A Microprocesser made in a digital logic family based on the NE555
Project Owner Contributor

4.4k 383 0 11
This scope combines the real-time and equivalent-time oscilloscope. It can be accessed via LAN or Wi-Fi, supporting two 250 MSPS channels.
Project Owner Contributor

2.9k 524 11 23
Because we need to prove there are still things people do better than machines...
Project Owner Contributor

432 6 0 6
It's not free energy, it's actually a terrible waste of energy.
Project Owner Contributor

172 2 0 3
If you've ever been frustrated by all the transistor patterns and duplicate names, this reference tool is for you!
Project Owner Contributor

Thanks for taking an interest in my colloid project.

Thanks for liking my ECM project.

Create your Hackaday.io profile like RAE and many others