One of the best parts of running the Caption CERN Contest is checking out the new images on CERN's servers each week. Every week I find new images to zoom in on. I trace wires, look at equipment ID cards, and generally try to figure out what exactly is going on.

This image is no exception. At first glance, one would think the CERN photographer was trying out some multiple exposure techniques. Zooming in on the high res JPG available at the original CERN page shows that the strange phenomenon in the center of the image are actually layers of fine wire strung between the two sides of the curve. Between that and the 80's clean room outfits, this must have been a very important piece of scientific equipment! 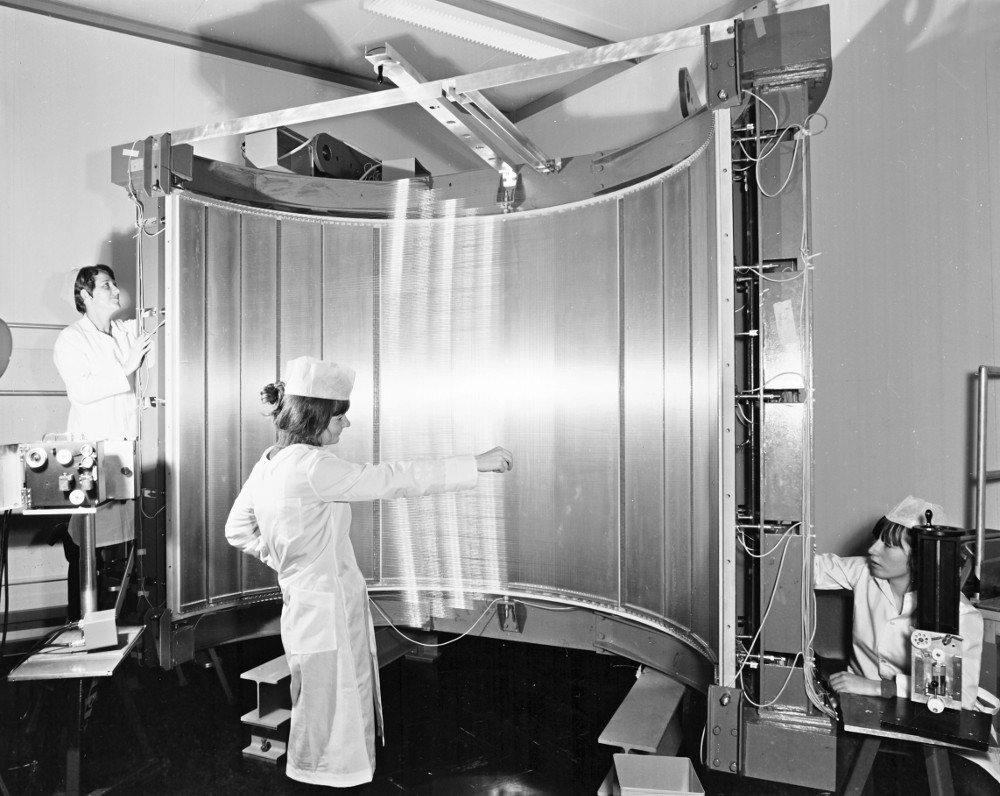 "Can this thing pick up the Oxygen channel?"

He said, "Beam me up Scotty", Not Beam up the Scottie. Now who's going to eat this doggie treat.

As the bass dropped, Sarah smiled to herself and thought "my mixtape is dope"

By pumping about 1.01 Gigawatt's out of the flux cap Mary was able to send her fist to the future and punch Erik de Bruijn in the face.

CERN builds new device to detect neutrinos by their vibrations. Marky Mark is expected to verify the results.

A few of the CERN food service team inspect the prototype microwave array R&D has been developing to speed up lunch prep.

Initial testing of "The String Theory" at CERN

Here you can see Susan playing the prototype Electro-Harp2000 while her two assistants check the final tuning.

"Eight years of schooling and two post doctoral fellowships just so I can make quilts. I should have been a dentist."

Beam my arm up, scotty

"DONT TOUCH THIS! That internet-thing is  running throu here. Frank will kill me if it fails again. He is currently developing an awesome online Battle-Chess"

"Your dance poses are wonderful!" whispered Svetlana in the corner as the holograph projected an image of her boss into the air. Peter was far too concerned with the capacitor overload to notice.

"Tighten it just a bit more..." she said, as the harmonic disintegrator was slowly being installed in the corner. Nobody would dare move things around on her desk anymore.

the kung-fu shield seemed to work well until they re-calibrated it to deflect attacks.

The C sharp minor 7 chord sounds well, but the major still needs some tuning before the christmas concert starts.

"George was confident that THIS time he had perfected the speaker so loud it would blow women's clothes off."