Coils, gleaming metal, giant domes, now this is a proper mad scientist image! The CERN scientists in this image seem to be working on a large metal device of some sort. It definitely looks like an electrode which would be at home either at CERN or the well equipped home lab of one Dr. Frankenstein's. We don't have a caption, but we do have a rough date of August, 1961. What is happening in this image? Are these scientists setting up an experiment, or plotting world domination? 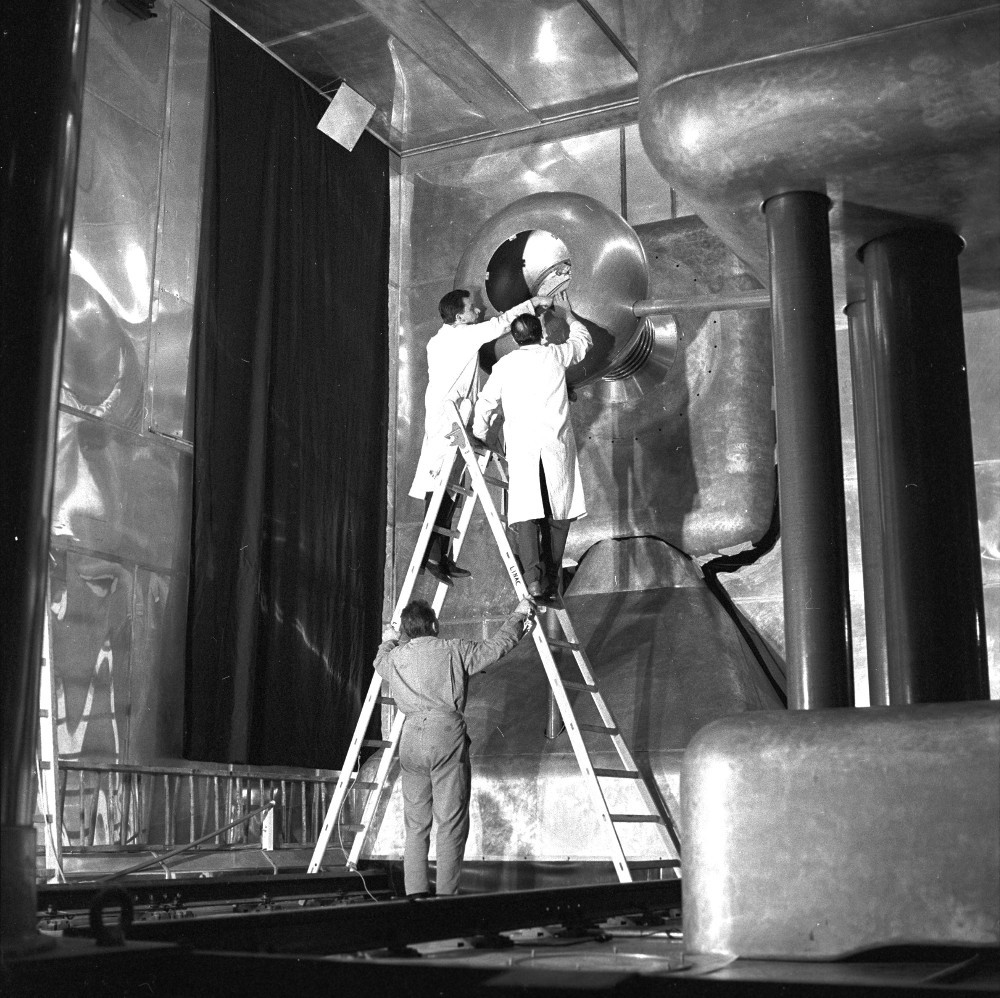 This week we're giving away a Logic Pirate from The Hackaday Store.

"so you are sure that the missing train had nothing to do with our brand new quantum rail tunnel?"

"What are you laughing at Carl?"

*snicker snicker* "It looks like a boob! PPFFF hahaha!"

The Easter egg hunts at CERN were such a challenge, they had to work in teams of three.

Here kitty kitty, come out so we can test the Magnetic Disatomizer Tesla Vacuum

Jim was no fool, there is a reason that coil was shrouded and out of arms length. He let the lab-coats find out for themselves.

Q) How many scientists does it take to screw in a nut on the 'LHC'?

Well, in laymen's terms, it appears to be a hemroid.

Alan was relegated to holding the ladder, having forgotten his lab coat.

Some experiments at CERN never reach their full potential.
Development of the BAC (Big Ass Camera) detector seen here
was halted early due to an Apple patent infringement lawsuit.

Thank you, I almost spit out my coffee.

"Well, that should be it for the giant pepper-mill.  Now all we have left to build is the salad-shooter, and then, Gentlemen, we lunch!  And right on schedule!"

Sporadic problems with the "A" key on the CERN teletype led to many unexpected delays.

This is what they use to vacuum the Astro Turf before the Super Bowl.

As everyone knows, a finer grind makes for a better cup of coffee.  That is how the Sub-atomic Particle Generator was invented.  Who would have guessed that it would be so big!  Now pass me some coffee beans.

After once again confusing inches and millimeters on the drawings, Howard was demoted from "Master Machinist" to "Chief Ladder Holder".

Now Don and Bill have to figure out how to fit the new Coffee Grinder in to their office without anyone noticing.

This rare photo shows the staff that actually built Willy Wonka's factory before being replaced by Oompa-Loompas due to workplace "accidents".

Few people knew that the Atari 2600 would have been released 10 years earlier, except for the fateful (and inexplicable) decision to have Bergholt Stuttley Johnson, then a janitor at CERN, design the original model, at a cost overrun in excess of 2.3 million dollars.  Pictured here is a pair of engineers installing the six inch toroidal screen inside of the joystick, while Johnson looks on.  (As a side note, it had the first, and to date only, processor to be liquid cooled with chocolate milk, as can be seen on the right side of the picture.)