Something a bit different this week. CERN is probably best known for the various particle accelerators they've had over the years. One of the first units was synchrocyclotron SC-1, which operated from 1957 to 1974. According to the album page on CERN's servers, SC-1's last day of operation was celebrated with a funeral procession. Scientists, and staff walked the grounds with flowers, top hats, and even a shrouded coffin. We can all related to decommissioning a well worn piece of equipment. Be it a computer, a machine tool, or even a synchrocyclotron. There are always the mixed feelings of thanks that it did a good job, and the relief that it will no longer need to be maintained.

Even though we have a pretty good idea of what's going on in this image, we're going to caption it anyway! Give us your best captions of what you think is really going on here! 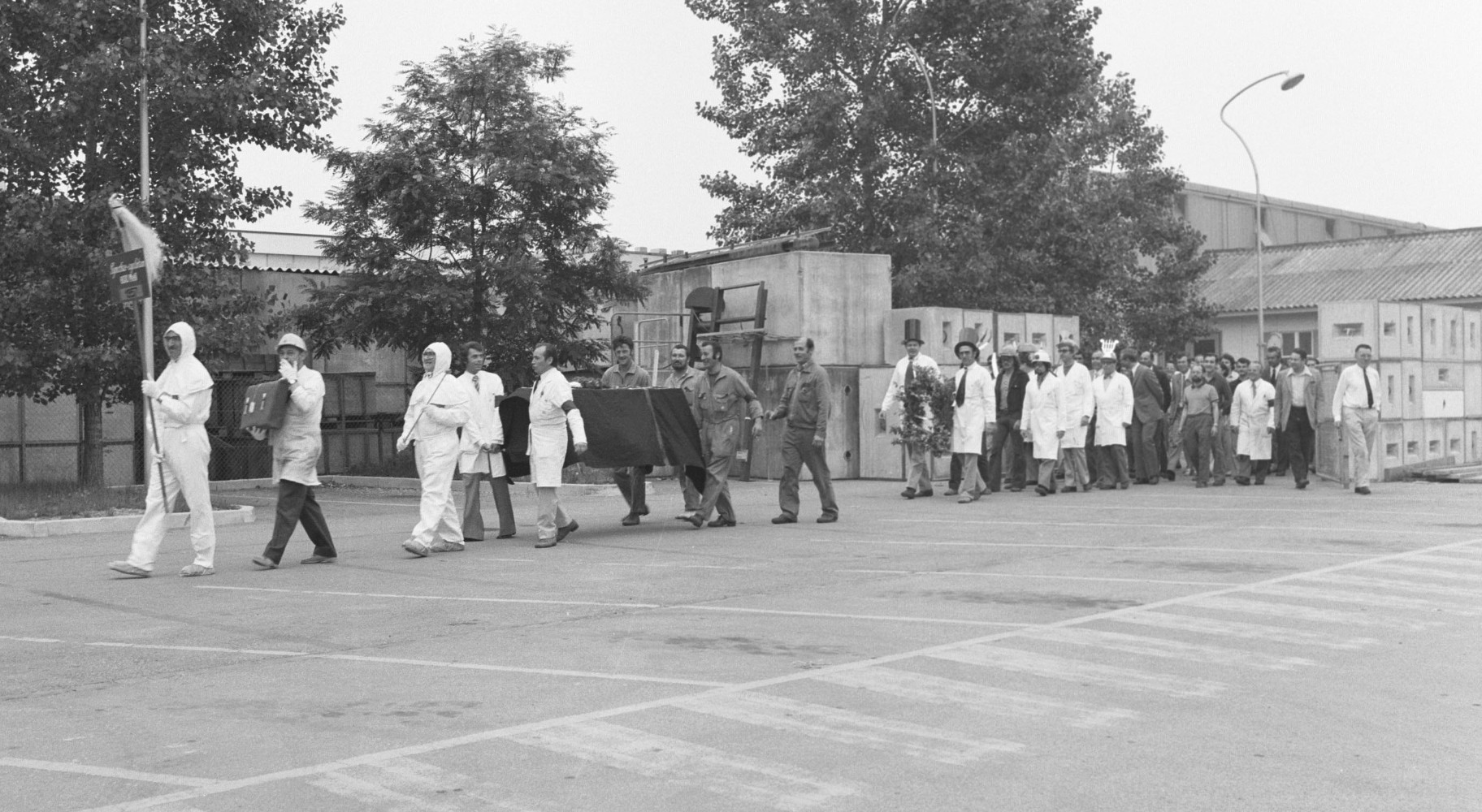 This week's prize is a LightBlue Bean from The Hackaday Store.

Tired of attempting and failing to make every piece of equipment "idiot-proof", the engineers decided that encouraging natural selection was a viable path forward.

Oddly, in spite of his resemblance to Karl Gebhardt, his reference to their work as "The Weight Cause" and his taste in Apollo-themed headgear, Charles Hebgard's behavior raised no flags at CERN until his now-famous "Behold, the Sun King Ariseth" memo appeared in mailboxes across the facility.

It appears they are celebrating (not mourning) the death of the engineer who designed the street light that is visible at far right.

Ding Dong the glitch is dead...  For most of us it is a happy moment when we correct a software problem, at CERN, it turns into a street party that can last for days.

After a brief flirtation with Discordian Theory, CERN physicists finally settled on Chaos Theory as the most effective tool in calculating Lyapunov exponents.

The Higgs Boson Particles were accidentally place in the Cern time capsule before it was buried, thus the difficulty if finding them now.

With the fall of the final cylon, the parades coming to a conclusion, mankind could ready itself to complain about Window 10.

Real life Hulk's funeral: after the incident, he was so radioactive that the burial had to be done with rad-suits.

Real life Hulk's funeral: after the incident, he where so radioactive that the burial had to be done with rad-suits.

Just think Kurt, in only 20 more years we can retire you in this pine box.

from the back... "Dibs on the cyclotron!"

Oh, beat the drum slowly and play the fife lowly...

Mardi gras is just not the same when conducted by scientists.

Because in 1956 Switzerland did not attend the olympic games, the guys at CERN thought it would be wonderful to do their own event, called the "Science Games". Notable sports included: SpeedSoldering, Pong, Arc Throwing, debugging and many more. Unfortunately the show had to be cancelled early because an engineer got electrocuted by the Jacob's ladder.

Sadly it wasn't just particles that were short lived.

Alas poor Geoff is dead and gone. His face we'll see no more. He should have checked the status light before opening the door!