OK, let's get started. I want to welcome Spencer Owen to the Hack Chat today to discuss his retro-clone of the ZX80, the RC2014. And anything else that comes up, of course.

Spencer, can you tell us a little about how you ended up in the retrocomputing world?

Kevin12:00 PM
I have built up two CPU boards for the 09 and one control board.

spencer12:01 PM
For me, it started out as my own project to see if I could build a computer on a breadboard... and it kind of went off the rails from there :) 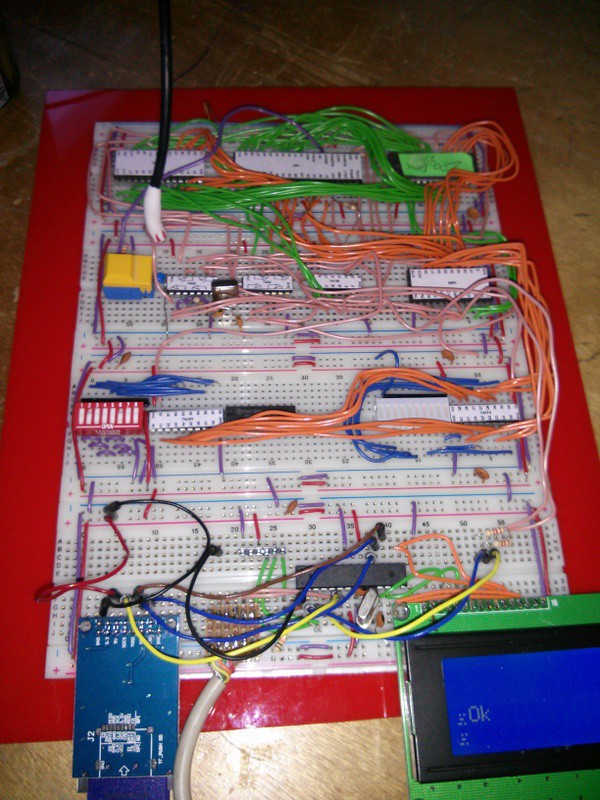 Was that the first working version?

spencer12:02 PM
When the Retro Challenge came around in 2014, I decided to enter the challenge by converting the breadboard computer to a PCB based computer

spencer12:03 PM
Yes, that's the first working one. Technically, the top 3 breadboards were the first one, and the lower ones were expansions

Were you working from docs or did you reverse engineer it?

Bil Herd12:03 PM
Thats ambitious doing that on a breadboard.

spencer12:04 PM
There's a LOT of information out there via Google, although my board was hugely influenced by Grant Searles design.

Kevin12:04 PM
I am always amazed to see people do complex builds like that on breadboard.

marblypup12:05 PM
@spencer Good question! I used to cross-assemble for it from an Amstrad PCW, which gives an idea of how long ago I last used it! Still have it, housed in a cigar box :-)

Linker300012:05 PM
Love to know the split between old'ns who were doing this stuff first time round and coming back (if they ever went away!) for the nostalgia, and those getting in to retro stuff for the first time. (I'm in the first category).

spencer12:05 PM
My main limitation is software, so I made sure it was compatible with Grants design so that I could run his implementation of Microsoft BASIC on it.

Kevin12:05 PM
I do but usually smaller items.

Bil Herd12:06 PM
If we really had to prototype something in the old days we used wirewrap... now hard to get cheap ww sockets, connectors, etc.

spencer12:06 PM
I need to try wirewrap one day. I've heard lots of good stuff about it, although in my mind, it still looks fragile and unreliable.

Kevin12:06 PM
My 1802 CPU board I designed and built 39 years ago was built on real breadboard and is half point to point and half ww sockets.

Bil Herd12:07 PM
wirewrap has pretty well known impedances done right and there is no "loose" wires such as an inserted wire in a breadboard, many wraps around each post

spencer12:07 PM
I was born in 71, and grew up as a Sinclair fanboy (Sorry Bill!). It's that Sinclair link that I chose the Z80 to start with

spencer12:09 PM
Actually, I've spotted quite a few names I recognise here as RC2014 customers, so I know that a lot of you already know about it. Is there anyone here that wants me to explain in a bit more detail what the RC2014 is?

Andrew Lindsay12:09 PM
@spencer Still working, I really should get the Forth ROM programmed so I can give that a try.

spencer12:10 PM
The EEVBlog video where Sagan builds the RC2014 Mini was awesome!

Kevin12:10 PM
I know. Sagan did a great job for someone so young.

spencer12:12 PM
@Peabody1929 I have looked at a 16 bit RC2014 (Using the 68000 processor), but despite a couple of prototypes, I've not got anything working yet. I think a couple of others are going down that route though, so there's likely to be someting 16 bit RC2014 compatible one day

Andrew Lindsay12:13 PM
Would the backplane be a limitation on getting a true 16bit system going?

marblypup12:13 PM
@spencer I build a very, very simple MC68010 computer several years ago... mostly because it was the biggest DIP I could find :-)

spencer12:14 PM
The original Backplane 8 and Backplane 5 won't support 16 bit. But the Backplane Pro has 8 pins right next to the A0-A7 address lines which are unused. So that'll support 16 bit just lovely :)

Ed Thierbach12:16 PM
@spencer So, how did you go from hobby to side hustle to main gig? What did the decision process look like for you?

epooch12:16 PM
Do you have supply chain issues using so many discontinued ICs?

Bil Herd12:16 PM
Give me 32 8051's and I can move the world, or at least build one bitchin vending machine controller

spencer12:17 PM
. @Bil Herd Just spotted your "What CAD" question. I'm a KiCad guy. Tried Eagle many years ago and never got on with it. The RC2014 was my 2nd ever PCB design, and KiCad just worked out well for me for that.

Remember those pin compressors for big DIPs? Those were handy

Lex Landa12:18 PM
@spencer Hi. I'm just getting into PCB design, and I chose KiCad too.

spencer12:18 PM
@epooch No, not really. Pretty much everything I use (or at least, the stuff that I sell) is still being manufactured. Even the Z80 chips are now coming out with a 2019 datecode on them

Linker300012:19 PM
I buy new from the mainstream UK distys (Farnell and RS) - often cheaper that the 'bay, where the sellers stick 'retro' in the description and bump the price.

Marten Feldtmann12:19 PM
I think its still amazing to see, that most of the Z80 chips are still produced, but the 68K family is more or less gone !?

spencer12:20 PM
The very first iteration of the RC2014 was all made with salvaged parts. Thanks to a donation to Nottingham Hackspace, we had loads of old logic and memory chips to work with.

marblypup12:20 PM
@marten I got my 68010 from utsource.net. They have lots of old stuff, but probably not still being made. (Motorola begat Freescale which is now part of NXP.)

Kevin12:20 PM
@marblypup There was the Dragonball microcontrollers for a while. They had a 68k core.

Bil Herd12:21 PM
@spencer So are you moving on PCB currently?

spencer12:22 PM
@Bil Herd Yeah, that breadboard photo I posted earlier was from 4 years ago. The RC2014 looks more like this now https://www.tindie.com/products/semachthemonkey/rc2014-classic-homebrew-z80-computer-kit/

AlanH12:23 PM
I work in the modern toy industry and the 6502 is alive and well in lots of dice/cob chinese toy ICs

spencer12:24 PM
For those that don't know, the RC2014 is a very simple modular computer on a passive backplane. So that means that each individual module is very very simple, but also that individual parts are easily upgradeable. eg some people have already made a Z180 and Z280 CPU module for it.

epooch12:24 PM
How has Tindie worked out as a sales platform?