spencer12:25 PM
@epooch Tindie has been absolutely perfect for me. In fact, if it wasn't for the Tindie platform, I think i'd probably still be a network engineer!

Bil Herd12:26 PM
6847 was a composite NTSC video chip, it didn't get as much airtime but really made you drool in the days of TVs as mnitors.

Rudranand Sahu12:26 PM
What would you recommend or advice for implementing a CPU on an FPGA for the first time?

spencer12:26 PM
The really nice thing about the modular nature of the RC2014 though, is the community have really taken it to heart, and started designing their own modules for it. There's now well over 100 boards out there which were designed to fit the RC2014 ecosystem :-)

Bil Herd12:27 PM
opencores.org is where I go for existiing CPU in FPGA cores

AlanH12:27 PM
Three things every engineer should do: grow their own transistor, implement a CPU at an RTL level, and port a high level compiler to it

spencer12:28 PM
@Kevin Thanks :-) Yes, the Pi Zero module was one of the first I made for it. It's the cheapest way to convert serial data in to HDMI :)

Lex Landa12:29 PM
@Bil Herd Yes, as I recall, the aspect ratio was a bit strange.

@AlanH - I've got a 1940's vintage germanium diode I plan to turn into a transistor. Does that count?

Bil Herd12:29 PM
ah SED or PERL (feels like Rodgers when he gets a flying money reference)

David Richards12:30 PM
Greetings, I bought an old 64 pin micro in a big ceramic and gold package recently. Hope to build it into something retro some day. Though I got it mainly to admire it looks.

Bil Herd12:30 PM
PAL had stripes, they never got the color clock phase inversion correct is my memory.

marblypup12:30 PM
@David Richards Do you know which it is?

Kevin12:30 PM
@spencer How long did the development take before you were felt it was ready for others to buy and use?

Gregory Nutt12:30 PM
@spencer You use bank switching with the large RAMs. How does that integrate with the software? Can you run an RTOS of some kind on it?

Took me a month just to get the basics started and working.

Marten Feldtmann12:31 PM
Well, there are at leat some RTOS source codes available for the Z180

Rudranand Sahu12:31 PM
Thank you @AlanH, BTW which compiler is most beginner friendly to be modified to add a new architechture?

19-rsn-00712:31 PM
a shift register and some leds shifting to right and when reaching the last bit shifting them back to the left

Kevin12:31 PM
I have three Xilinx FPGA boards. Easy to get the flashing LED going. FPGA's are a whole new ball game.

spencer12:31 PM
@EtchedPixels I don't think any of the modules have been particulaly crazy. But I did release this one a couple of years ago https://www.tindie.com/products/semachthemonkey/rc2014-googley-eye-module/

Bil Herd12:31 PM
Check out the DE10-Nano, still cheap but Cyclone V and SOPC built in, I am looking at some midly heavy DSP with one.

Lex Landa12:32 PM
I wonder if that's why my Beeb keeps losing its colour, in composite..

AlanH12:32 PM
@Rudranand Sahu I've only done gcc which isn't simple, but there are a lot of existing examples

Bil Herd12:32 PM
@kevin But you can WRITE hardware!

Ed Thierbach12:33 PM
@spencer So how many googly eye kits have you sold?

AlanH12:33 PM
Easier to fix bugs with a text editor rather than a soldering iron.. but something to be said for projects like rc2014

spencer12:33 PM
@Gregory Nutt The bank switching on the 512k version is designed around Wayne Warthens OS Z-System, which is a modern efficient implementation of CP/M.

Bil Herd12:33 PM
@spencer forgive me for not knowing, do you make the design files available also?

AlanH12:34 PM
I was referring to FPGAs

Kevin12:34 PM
@Bill Herd oh, I know. I have two Spartan 3 boards and one Spartan 6. I just haven't had a lot of time to sit down and do much with them yet. I did wire up 8 seven segment displays using charlieplexing and started driving them with one of my Partan boads.

Rudranand Sahu12:35 PM
It depends, if it's on mass scale then it's easier in software

spencer12:35 PM
@Bil Herd I make everything available except for the Gerber files. I'm more than happy for people to copy the rest of the design, but because I don't release the gerbers, I don't call it Open Source

AlanH12:36 PM
FPGAs can poison the retro-well.. once you add that spartan-6 USB-everything bus analyzer module to a project like the rc2014.. might as well do the whole thing in programmable logic

spencer12:36 PM
@19-rsn-007 My preference is to always fix things in hardware if I can too. That's because my software skills are lacking :)

Marten Feldtmann12:36 PM
Around the RC2014 there are so many other implementations of CPU boards, motherboards - that actually its ok, that Spencer has not released the sources.

Bil Herd12:37 PM
@kevin Every example program you try is worthwhile. Just get used to turning things out from beginning to end and then also learn to simulate.

marblypup12:37 PM
@AlanH Interesting view... I was thinking of adding a graphics board to my 68010, based on an FPGA. 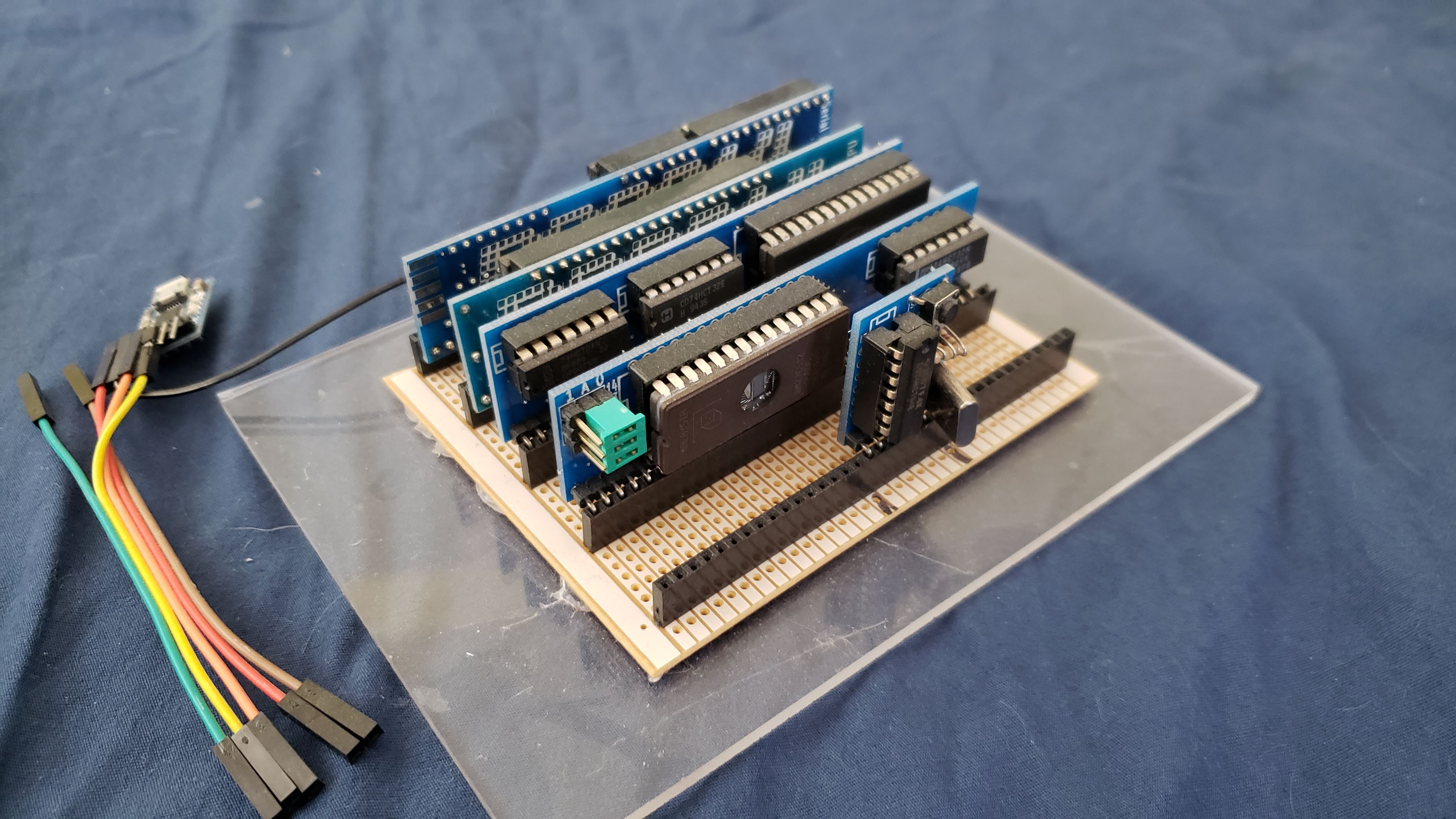 David Richards12:37 PM
I've been experimenting with vhdl, its hard to move away from thinking sequential program logic to parallel logic. 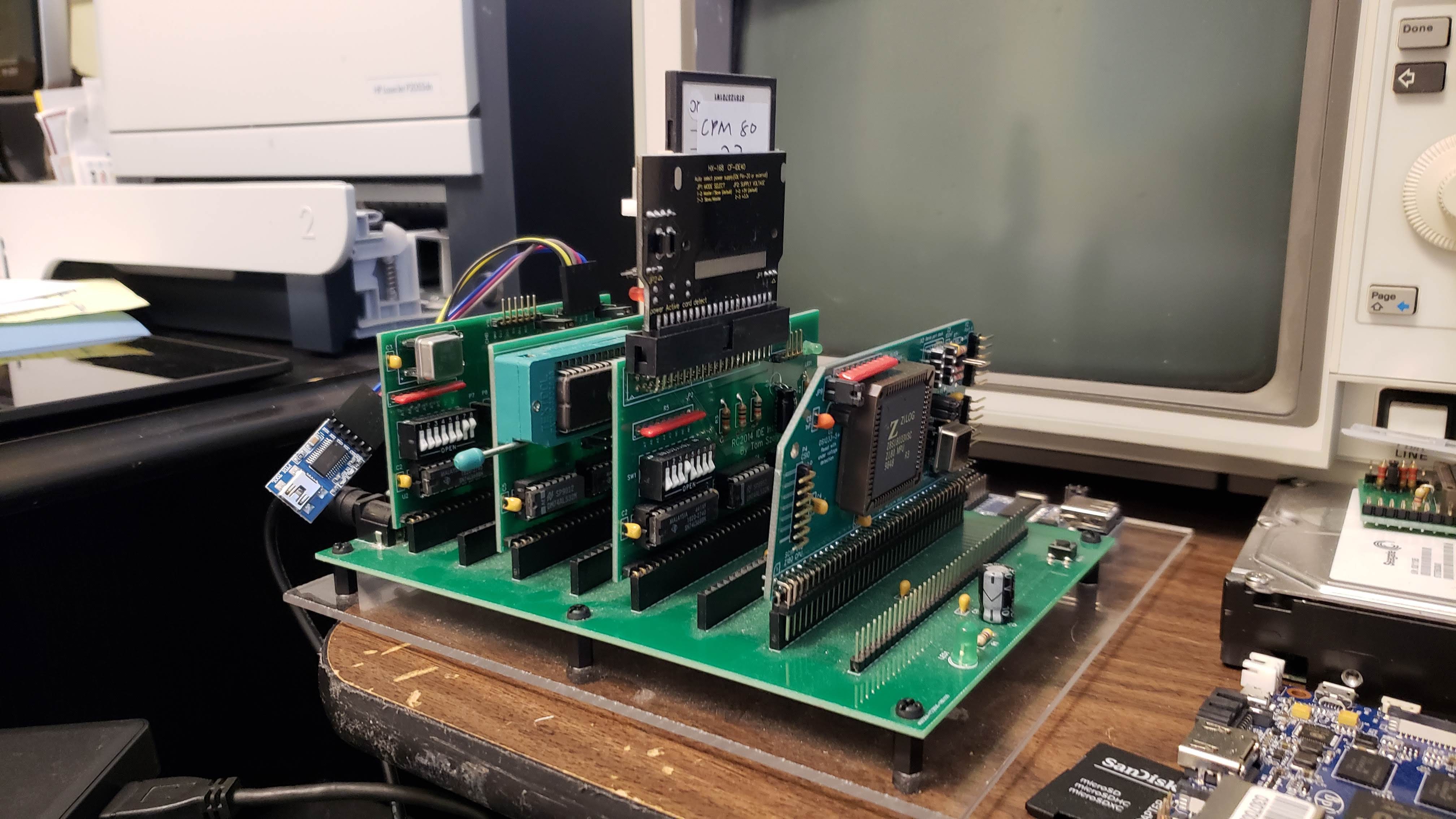 Marten Feldtmann12:38 PM
The FPGA is a nice add on for creating hardware items not available any more ... especially video stuff

AlanH12:38 PM
@marblypup go woz old-school first and try it with a discrete design - maybe even with a 6845.. then cheat if you have to

Bil Herd12:39 PM
@David Richards VHDL is usually a little harder to pick up for newcomers than Verilog. With that said the best programmer I saw programmed using the same casting protections in VHDL (where you pre-define the heck out of everything) only in Verilog

Kevin12:39 PM
@Bill Herd, yes. Using an FPGA to control multiplexed LED displays is a step up from flashing a single LED. It was a good way to start getting in to something more complex. The charlieplexed display can even be used for debugging FPGA projects as it can be used for text output using a 7 segment based alphabet. 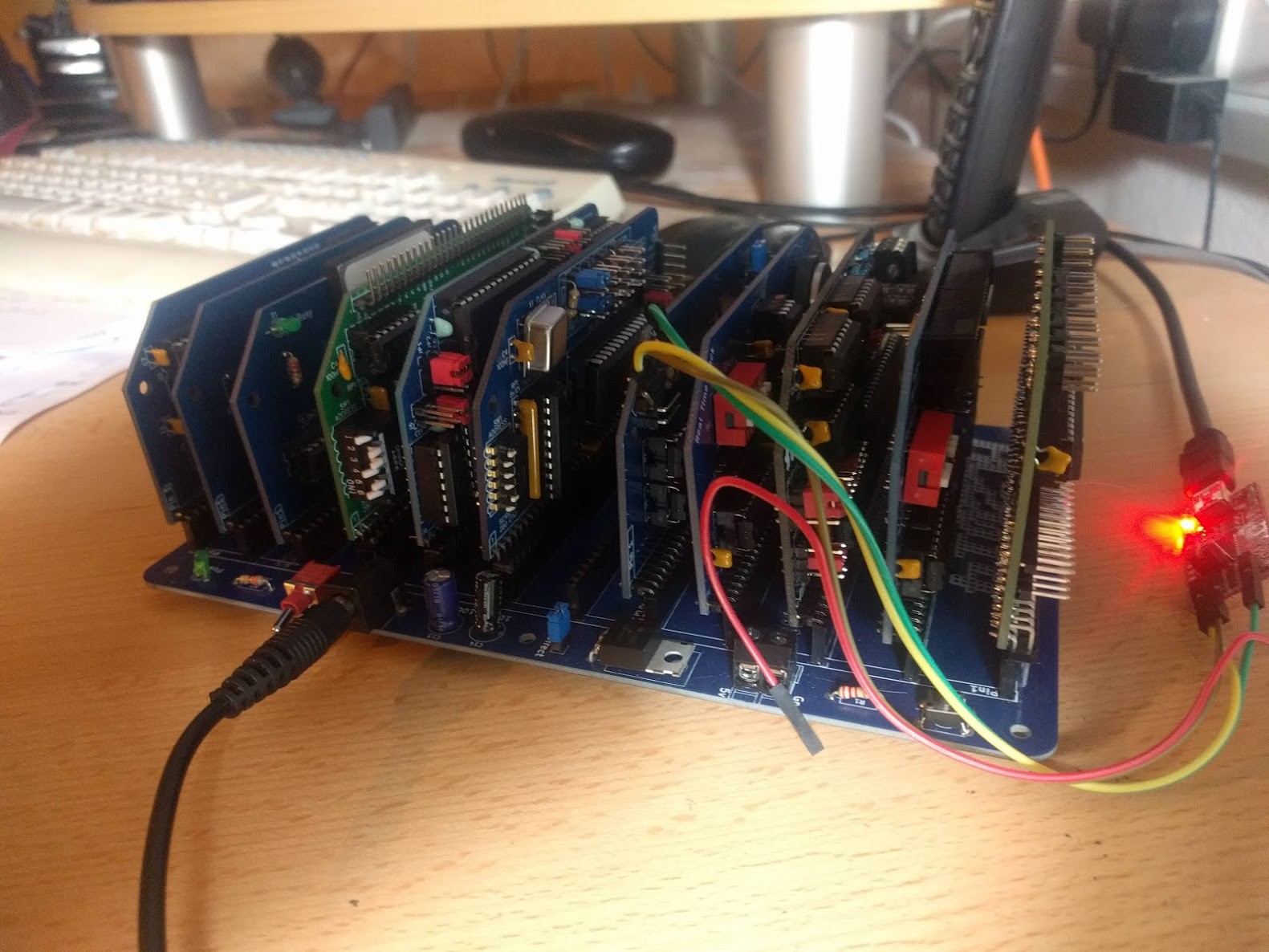 19-rsn-00712:39 PM
@David Richards , yeah learning yourself to think different when working the same way to years is a pain...but the satisfying felling when things are working is great

EtchedPixels12:39 PM
It gets to be an addiction 8)

AlanH12:40 PM
@spencer are there any case designs floating around?

Kevin12:40 PM
I read up on VHDL and Verilog. Based on what I read I felt that VHDL was the better language so I've been starting to use it even though my part of the world has Verilog as king.

spencer12:40 PM
I am always intrigued to see what other people build for their RC2014. Everyone seems to come up with great ideas and awesome looking machines.

Andrew Lindsay12:40 PM
@AlanH there are lasercut designs to sandwich the backplane

Bil Herd12:40 PM
Some day a job opportunity may arise because of something you have played with in your spare time.

David Richards12:41 PM
Hi, yes, multiplexed display was the first thing I had to to on my system. trial by fire, very rewarding when it worked.