AlanH12:41 PM
would be cool to crowd-fund a proper injection molded case for it

Andrew Lindsay12:41 PM
@Bil Herd That is true. Had a number of dev jobs for clients based on previous projects and things I've played around with. 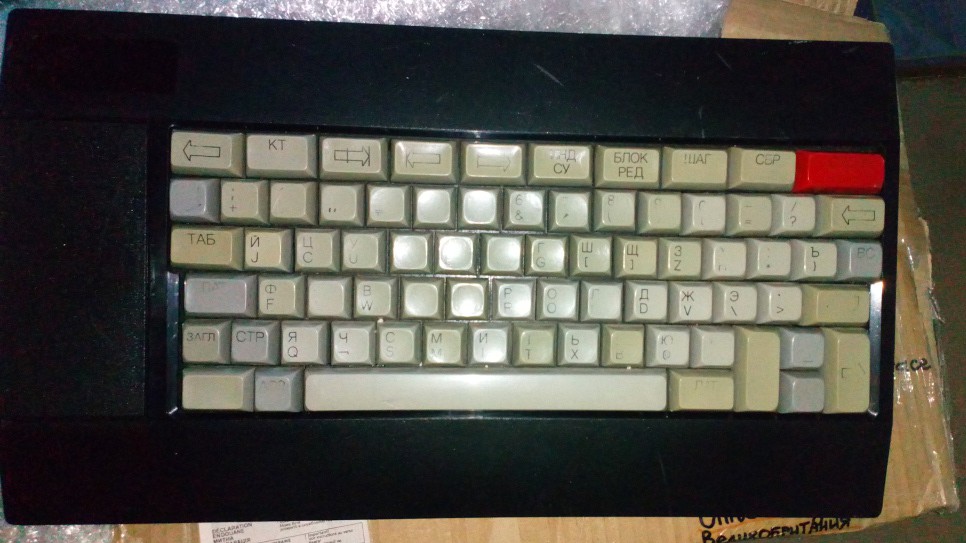 Lex Landa12:42 PM
@marblypup I couldn't resist uploading this photo of my Elektronika BK0010, I think it is. I've never used it - I haven't got pinouts for the connectors. It's got 4 identical 5-pin DIN sockets.

Bil Herd12:42 PM
@kevin I think one has to be really experienced to tell the strong suite of VHDL vs Verilog vs VHDL and I learned both at once since I was younger (couldn't do it now). However Verilog tends to be easier if not better outright. We joke that we can tell a lot about a company based on which one they choose for their official language.

Lex Landa12:42 PM
My apologies for suddenly pasting that image.

Kevin12:43 PM
@David Richards That is one of the early pitfalls when starting out with FPGA's. You have to try and think of the hardware and what can it can be doing at the same time and break the HDL in to related blocks of code.

19-rsn-00712:43 PM
@Bil Herd exactly...I mean, look at me. I've been playing around with all sorts of stuff electronics wise, about 2 years ago a buddy of mine dropped a ball that they were looking for employees at the company he was working fro and now almost 2 years later they offered me an education and the oppertunity to get a better fitting job function :) 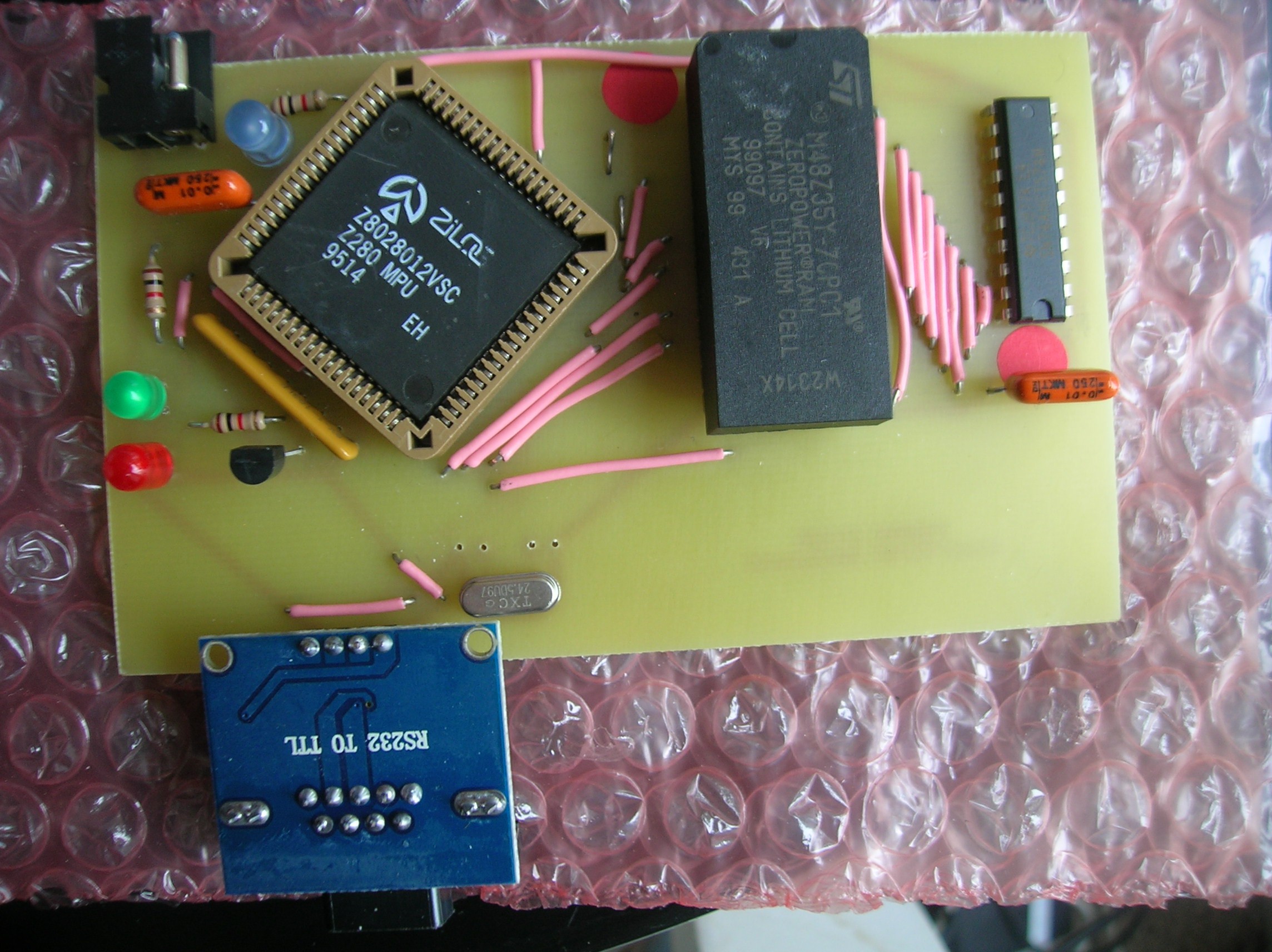 spencer12:44 PM
Do many of you that play around with modern hardware also tinker with genuine old (1980's or earlier) stuff?

Bil Herd12:44 PM
I only work on new stuff, trying my hand on open source radar... I still have the tshirt from doing the old stuff.

AlanH12:45 PM
ok.. i'm dragging out my box of goodies this weekend and working on my had.io project. rc2014 motivation = win

Nils-Arne Dahlberg12:45 PM
Elektronika BK0010, one of the smallest LSI-11 compatible computers made. Probably the one sold in the biggest numbers...

19-rsn-00712:45 PM
Well first I was mostly just playing around with old microcomputers, then it came to a point where I had to repair them, modify them and all that stuff, so the interests moved to learning how they actually work and designing stuff for them. and now even to a point where I want to design my own machine

marblypup12:45 PM
@Lex Landa Thanks. The signals connected to the NVRAM are on 2 sides of the CPU, so rotating the CPU seemed easier than routing lots of stuff round a corner.

spencer12:45 PM
It's awesome that this is inspiring people to dig out their old stuff :D

emdarcher12:46 PM
@spencer I have mainly played with modern microcontrollers, AVR, STM32, etc. But have a bunch of salvaged 80's 8-bit components and EPROMS. Working on eventually doing a retrocomputer with an 8085 I found. When I get time though...

Linker300012:46 PM
@spencer My scope runs from TTL/6502/Z80 to ESP32/RPi/BBC Micro:bit via GAL, AVR and PIC microcontrollers - with the odd valve radio restore and transistor-based stuff thrown in

@Bil - You're a good soldier

Nils-Arne Dahlberg12:46 PM
But the Elektronika MK-85 is probably the smallest LSI-11 computer ever made...

Lex Landa12:46 PM
@marblypup Could you post a photo of the back of the PCB, please?

Now get them to buy tickets for the Supercon!

Bil Herd12:47 PM
@Lex Landa You learned something that can take an "experienced" engineer awhile to learn since they can sometimes be too wed to how things were done in the past.

EtchedPixels12:47 PM
@Peabody1929 Bill Shen is working on a KIO using board

marblypup12:47 PM
@lex Not today, I think. The board's at home but I'm not. I dug that photo out of my Facebook! 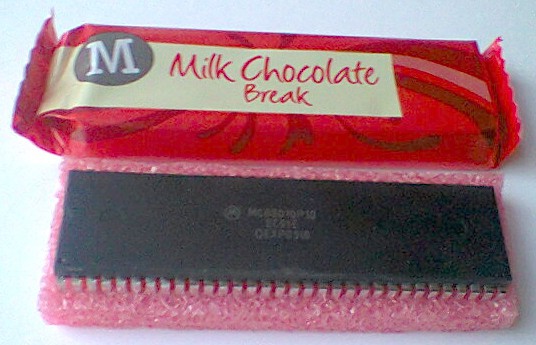 David Richards12:48 PM
I keep wondering whether to get an Electronica system for no good reason. I saw the soviet programmable calculators recently, they look nice too. One of the even earlier ones has a delay line memory.

Lex Landa12:48 PM
@marblypup No problem. I wondered what the track layout was like..

Nils-Arne Dahlberg12:48 PM
@spencer I play around now and then on my old Sharp PC-1500. My other old computers have been sold or given away long time ago. (Sharp MZ-711, Sinclair QL, three Amigas...)

EtchedPixels12:48 PM
@spencer I do retro including fixing old machines as a hobby and work with scary people who build 5GHZ CPUs at work

Bil Herd12:48 PM
If you look at some of the Terasic boards they did a 45 degree rotate as best option also.

spencer12:48 PM
@Peabody1929 I don't "enforce" anything :) However, I tend to design the boards and modules that I want to use. Some people are putting quite highly integrated chips with lots of modern interfaces on them. That's great, because it means that I don't have to :)

Bil Herd12:49 PM
I used to say that an engineer is the laziest workaholic you will find, but now I'm too lazy to even say that.

Gregory Nutt12:49 PM
@spencer I am a software guy. I have a Unix like OS that like to port to retro hardware. But it is difficult to get any significant C-based software in 64Kb.

Andrew Lindsay12:49 PM
So you've got people using smd components in other add on boards rather than just pure through hole designs?

Marcel van Kervinck12:49 PM
This will be a good weekend to solder my RC2014 Plus.

19-rsn-00712:50 PM
I wish I could solder anytime soon. a bad hand injury is keeping me from doing it. been keeping me off a soldering iron for 5 weeks now

Nils-Arne Dahlberg12:51 PM
@David Richards the "normal" programmable calculators from the Elektronika MK series can be bought for not too much. MK-52 and MK-61 are commonly for sale on different sites.

spencer12:51 PM
@Andrew Lindsay Quite a few of the 3rd party RC2014 Compatible Boards do use SMD parts. Everything that I supply, though, is through-hole (except for the CF socket, which I pre-solder, and the ESP8266 module)

AlanH12:52 PM
@spencer any plans for VCF-West in August in Mountain View, CA or VCF-MW in September in Chicago?

spencer12:52 PM
@AlanH YES! (And by "yes", I mean, yes, I really would love to go to a VCF event over there one day. I just need to organise myself)

Nils-Arne Dahlberg12:53 PM
Ahh, forgot, I got 2 older Macs stuffed away at my parents place... I suppose they need some love and change of capacitors soon...

Bil Herd12:53 PM
We did a retro home build panel at VCF East this year.

Kevin12:53 PM
I keep trying to scroll back to read some of the scroll back and the chat window keep jumping to the latest messages before I can read some older ones that ran off the top of my screen. grrr.

Lex Landa12:53 PM
@Kevin I got that too. Will this chat log be available after the chat is over?

pi314159atgithub12:54 PM
@spencer Any chance you might be going to the Liverpool Makerfest?

AlanH12:54 PM
I co-produce VCF-SE.. would love to have you in Atlanta next spring as well

spencer12:54 PM
I try scrolling back to see the older messages too, but I know I've missed some. So, if anybody asked me a Q that I ignored, please ask again :-)

marblypup12:54 PM
@kevin I have the same problem. I'll try to prattle less!

Bil Herd12:54 PM
@AlanH Stop me and say hi if your there, I should be wearing either a Hackady tshirt or a COmmodore one bitching about Apple.

spencer12:55 PM
@pi314159atgithub YES! I've already got a stall booked for Liverpool Makesfest. Come and find me and say Hi!

Marcel van Kervinck12:55 PM
@Spencer Do CP/M and FUZIX have the same hardware requirements to run on RC2014? I know I have to upgrade my RC2014 Plus anyway. (I'm a bit more interested in FUZIX, because that might port well to the Gigatron, once we've the C compiler a bit more mature.)

Nils-Arne Dahlberg12:55 PM
@David Richards eeprom is MK-52. That is on my look out for list. I already got a MK-61 some months ago. A mix of TI and HP. Form factor reminds of the old TI 57 etc (the ones with red LED display), but the MK-61 uses RPN, so the usage is more like the HP calculators...

Linker300012:55 PM
Since we're talking venues, is there much Retro activity on the South Coast UK (Sussex/Hampshire) - things never seem to get this far south, or I am just rubbish at knowing about them.

Andrew Lindsay12:56 PM
Thanks @spencer Will catch up with you soon. Got to drop off. Thanks for inspiring me on this. P.S. We are having a Retro-Computing day at NADHack later in the year as part of a local festival.

Bil Herd12:56 PM
That was the classiest stage I have been on, I tried to give VCF "stage envy" but it didn't work.

spencer12:56 PM
@Marcel van Kervinck I think @EtchedPixels is in a much better place to answer that :) My guilty secret is that I haven't actually used Fuzix. Yet.

Of 40 million blind people in the world, only 10% can read and write braille.

One of the primary reason for this is because braille hasn't yet found its jogging in the digital era, due to the sheer cost of such devices, as well as the affordability matrix of the visually impaired.

Low-cost braille displays have been sought after for quite a while with no avail.

Due to the sheer expense of braille technology, and the scarce availability of books in braille, the medium is slowly falling out of favor. But many agree that braille literacy is paramount for the empowerment of the blind for education and employment.

It's amazing how expensive assistive technology is. A small flagil braille display costs more than $ 1,200 USD and a good quality one goes from $ 3,000 to $ 6,000. That is why I am developing an open source project. This is by no means a finished product. Being an open source project, I hope others will improve the design. In the near future, with the help of volunteers, Brailletouch will reduce the cost of a braille display by 90% and allow anyone who is visually impaired or deafblind to read and write braille, as well as use a computer or mobile device efficiently. and without noise. So if you know someone, if you are a creator, if you are curious or if you want to help, feel free to enter our repository https://github.com/brailletouch/Brailletouch and help me build a community around Brailletouch.

My braille display design succeeds in reducing the cost of a braille display by over 90%. Currently, a braille screen has a cost between $ 1200 and $ 6000, being $ 1200 the smallest and most fragile, my proposal seeks to achieve a braille screen that can be manufactured between 100 and $ 150, it could even be much cheaper when making production mass. Basically, we could have a screen at an affordable price for all visually impaired and deafblind people.

My project is open source. The idea is to make available to anyone anywhere in the world a code that can be modified and improved, files for 3D printers to print their parts and an assembly manual, so that anyone can download, print, assemble and use

Its development is based on an esp32 microcontroller. (What is open source hardware)

I do this because I am looking for support if you can support or meet someone who can support with the following needs:

Any company or organization that finances the project.

If you can support some of these needs or know someone who can do it or an organization that can financially finance the project, I would be very grateful if you could contact me at +584129994784