Listening to the music of the spheres

Joseph Eoff12:45 PM
While we're on the subject of data, is there standardized format for collecting data and metadata?

Frank12:45 PM
for example I might build a station out of curiosity, but then it may lie dormant for days or weeks while my real job gets in the way. During that time, would my station be valuable to others ?

RichardCollins12:46 PM
@Frank I noted that one too. You guys are saving me a lot of time. This is hard when you do not know where to look.

0xCoto12:46 PM
@Frank I talk with the SatNOGS guys on a daily basis, but doing something similar for radio astronomy is tricky. However, I haven't given up. Stay tuned... 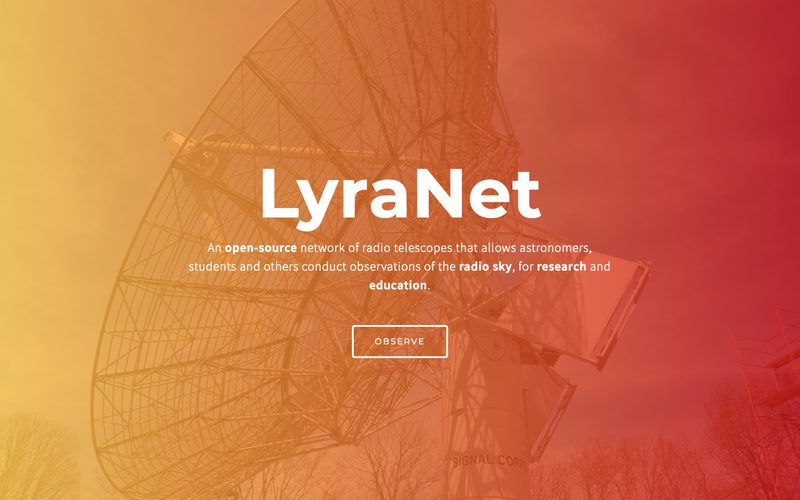 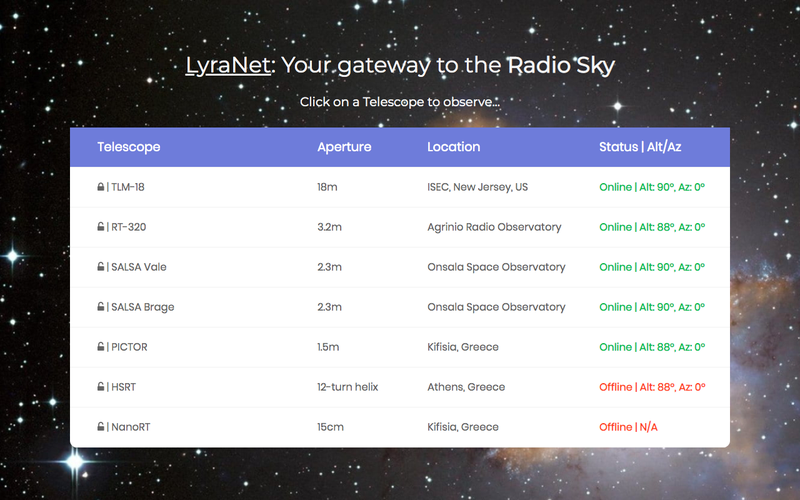 0xCoto12:47 PM
Future plans includes interferometric work, but I still need to figure out how to deal with instrumentation limitations on each telescope.

James Aguirre12:47 PM
@Frank good question! I'd like to figure out how to do a kit. The electronics (plus a custom PCB) are the "easy" bit. I tried "Actobotics" for the mechanical initially with the thought that it would easy to specify a parts list for somebody to buy, but it was just frustratingly floppy and got pushed around by the wind, etc, etc

0xCoto12:48 PM
@Steve Benesko Not ready yet, but send me an email at 0xcoto@protonmail.com if you want me to share it with you when it's ready (probably this month).

Frank12:49 PM
@James Aguirre the mechanicals are the tricky part. you can source darn near anything you need from the usual (suspect) sources online, but final assembly is always a headache. I'm thinking something similar to the way you can buy a generic 3DPrinter frame, then throw in your own brain-box and RF gear. 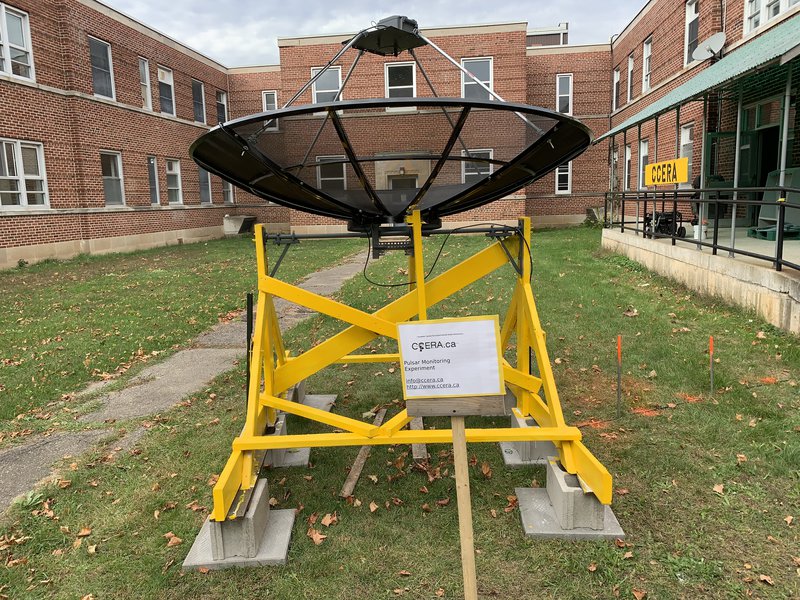 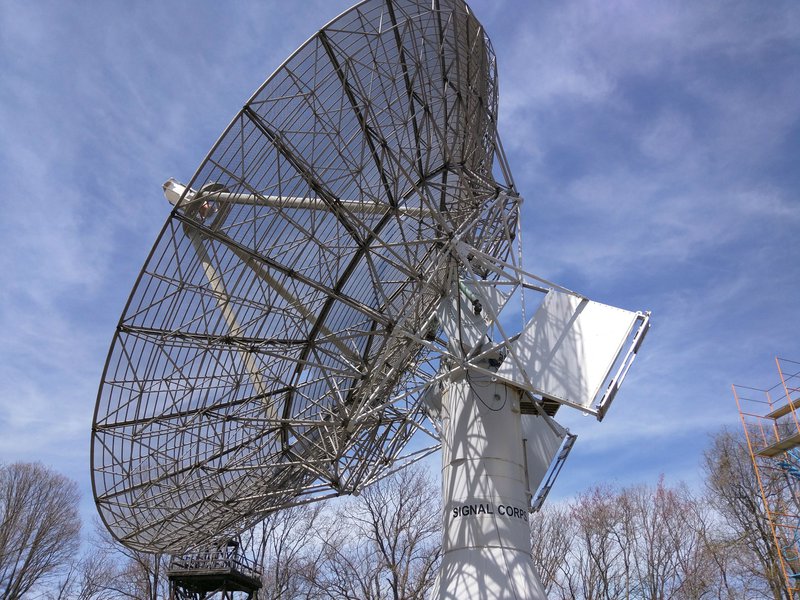 0xCoto12:51 PM
I'm also planning to do some pulsar monitoring work with this 18m telescope...

0xCoto12:51 PM
Good thing we have an ultra wideband spectrometer (500 MHz), so our sensitivity is significantly maximized. 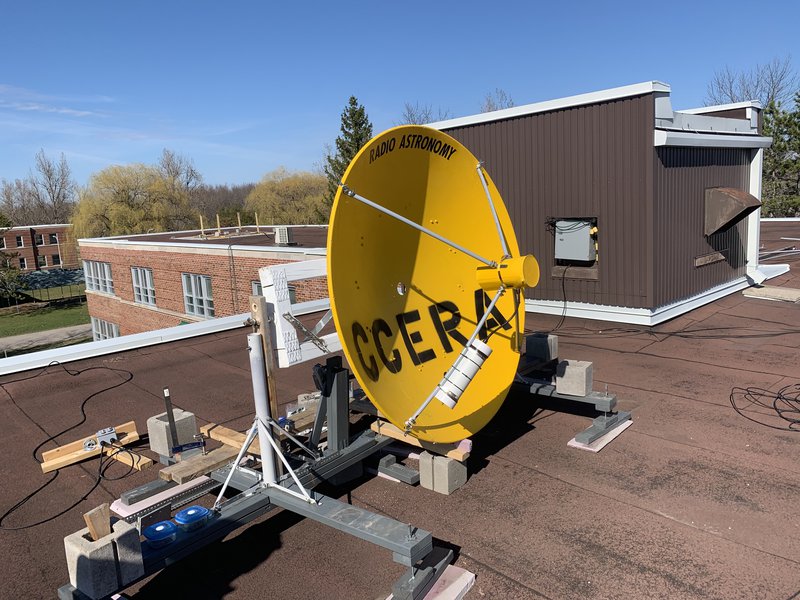 jeremy.lusk12:53 PM
Any suggestions for introductory texts on radio astronomy (something for an undergraduate student?)

0xCoto12:53 PM
@sjoerd.timmer It's not ready yet I'm afraid... Can you send me an email at 0xcoto@protonmail.com if you want to be notified once it's ready?

Ethan Waldo12:53 PM
Sounds like there's plenty of interest in backyard RA. Any thoughts on setting up a group for ongoing discussion?

RichardCollins12:54 PM
I just found out that the gravitons I have been working on for the last 40 years are likely the "axions" that many people are working on. All the things I knew were likely - many of them are already worked on by others. The implications are that I can use electronic devices to measure gravity. Since their "axion" is my "graviton". It is a little more messy than that. The field is more like our atmosphere with a mixture of particles with different concentrations and properties. Optical sensors that can take very short exposures of what looks like dark current noise (the lens is covered) can be used as part of "time of flight" or "correlator" or "radar" or "interferometer" networks to scan in 3D. I am just trying to see if anyone is interested. It is hard doing things like that alone. And it needs separated sensors and careful coordination, that the radio astronomers have the background and interest for.

Dan Twedt12:54 PM
I would welcome an ongoing discussion on backyard RA.

kjansky112:55 PM
@James Aguirre Some of the recent work on FRB's seem tantalizing. any chance amateur astronomy has a chance of either participating or of any detection?

James Aguirre12:56 PM
I had a postdoc ask me that the other day. We went through the numbers, and you need a pretty big dish and a very fast recording device on the backend

James Aguirre12:56 PM
and you want to be recording all the time, lest you miss one

In radio astronomy, a fast radio burst ( FRB) is a transient radio pulse of length ranging from a fraction of a millisecond to a few milliseconds, caused by some high-energy astrophysical process not yet understood. While extremely energetic at their source, the strength of the signal reaching Earth has been described as 1,000 times less than from a mobile phone on the Moon.

sjoerd.timmer12:57 PM
Are FRB's an opening in the landscape where a network of amateur observers could outperform traditional large facilities?

James Aguirre12:57 PM
the sweet spot seems to be around ~400 MHz, so that makes things a big harder

sjoerd.timmer12:57 PM
So it seems just out-of-scope for the average hobyist...

kjansky112:57 PM
What are your guess as to the phenomena?

0xCoto12:58 PM
@kjansky1 There are a ton of theories (which indicate the bursts are of astrophysical origin and most likely not related to ET transmissions): http://adsabs.harvard.edu/abs/2018arXiv181005836P

RichardCollins12:58 PM
I was working on methods for monitoring to predict when a pulse is starting, the go to high resolution. That seems to work. They use it with some newer security cameras. The cameras have the bandwidth that many other techniques do not. I am trying to adapt their video ADCs (12 to 16 bit) multichannel to other data streams. Why they are good for correlation networks.

RichardCollins1:00 PM
when a pulse is starting, then go to high cadence or tempo or sampling or frame rate. I am trying to look at all the people doing these sorts of things

Dan Maloney1:00 PM
That was a really fast hour, I have to say. Sadly, we have to let Dr. Aguirre get back to work, but everyone should feel free to stick around and continue the chat. I found this really useful and exciting. I've been eyeing a few old Dish network antennas in my neighborhood, so maybe it's time to latch onto one.

kjansky11:00 PM
This has been a great chat, wish there was a regular meetup, say monthly.

open up any new research partnerships/collaborations for RA?

James Aguirre1:01 PM
I certainly learned something, and there are a lot of very impressive projects out there!

RichardCollins1:01 PM
Great. Thanks for sharing!

Frank1:01 PM
Thanks for the opportunity @hackaday.io !! Cheers @James Aguirre !

Allan1:01 PM
Really great - thanks for T'ing it up - hope we can do it again sometime soon

Dan Maloney1:01 PM
Thanks so much for giving us your time today @James Aguirre !

Steve Benesko1:01 PM
yes this has been interesting for me as well, would like a regular meet up to learn more

Dan Twedt1:01 PM
thank you for the captivating chat all!

Joseph Eoff1:02 PM
Another vote here for a regular meet up.

0xCoto1:03 PM
We have a Radio Astronomy chat on Discord here: https://discord.gg/eWXf93A