It isn't brain surgery. Until it is.

Thomas Shaddack12:31 PM
what about electromyography? could it be more useful for some uses than the notoriously fickle eeg?

Charlie Lindahl12:31 PM
Which resulted in a product https://eyedrivomatic.org/

Mark Laubach12:31 PM
@Thomas reproducible results have started to come out of some shared projects, especially ones like DeepLabCut and the Open Miniscope. Many labs are using.

Thomas Shaddack12:32 PM
...random thought for communication. eyeblink sensing, one for each eye. left-eye blink is dash, right-eye dot, both is end of symbol or ignored.

Thomas Shaddack12:32 PM
could be a faster alternative to gaze-controlled keyboards.

Leonardo Gomes12:32 PM
Hi guys, I'm Leonardo Gomes from Brazil and, only to give an example of BCI application, I'm working with EEG for controlling sex toys and helping people with disabilities

Chuck Glasser12:32 PM
Simply tracking an animals behavior is only one part of the problem. It's like tracking the movement of a steering wheel of a car without knowing if the car is traveling down a road under the control of a driver, or is it a 3 year old child playing with the wheel as it is parked in the garage? Context is everything. Measuring the EEG of a rat in a box is not that hard. However that alone is not useful. Tracking movement AND the EEG, now that is something valuable.

RichardCollins12:33 PM
There is a contract mechanism for NSF where they are asking for people to come up with sensor to monitor ANY indication of the state of the patient. Any data stream is possibly and indicator. They do not classify "behavior" but treat it as sensor fusion and looking for patterns.

Thomas Shaddack12:33 PM
thought. can optogenetics be leveraged? something that can be injected to the neurons and make them sensitive to light, or emit light? could work around the issue with electrode stability.

Lex Kravitz12:33 PM
@Thomas Shaddack For many situations it may be! The important thing is to measure a good signal, which is where EEG is challenging, to record it well requires a controlled environment, gel electrode contacts, etc. So if EKG can give you what you want then it can definitely be better. And yes, EMG of eyeblink sensing is great! I remember an EEG headband device that incorporated that as well, imo that part probably worked much better than the EEG sensing.

Thomas Shaddack12:34 PM
are there major differences between emg and eeg amplifiers/electrodes?

RichardCollins12:34 PM
You can probably use the methods at OpenAI.com to process the raw signals. They seem to be commercial, but they do share their tools on GitHub

Mark Laubach12:35 PM
One thing that we wanted to mention is that if anyone has a project that they have shared, let us know and we can get the word out on it either by a blog post or Tweet, or both. There is a contact form on this page: https://edspace.american.edu/openbehavior/

Essaamar12:35 PM
Just use a kalman filter it should do the job

Lex Kravitz12:35 PM
@Chuck Glasser Great way to cue-up my next project I wanted to highlight! https://bonsai-rx.org/ Bonsai is an open-source visual programming language made by Goncalo Lopes - it's a bit of a steep learning curve but it allows you to pretty easily capture data from a webcam, perform processing steps (like identifying a mouse in the image and tracking her position), and also record ongoing electrical activity like EEG signals. All open-source and they have a great user forum for help.

Lex Kravitz12:36 PM
@Thomas Shaddack Are you talking about the reptile or the programming language?

RichardCollins12:37 PM
I tracked this sort of thing since high school and later in more detail because my brother broke his neck and was quadraplegic before he died. Wish there had been a Hackaday.IO more thirty five years ago. I am partial to noncontact method like MagnetoEncephalogram, and looked deep into SQUID and other magnetometer methods. Hard working alone. 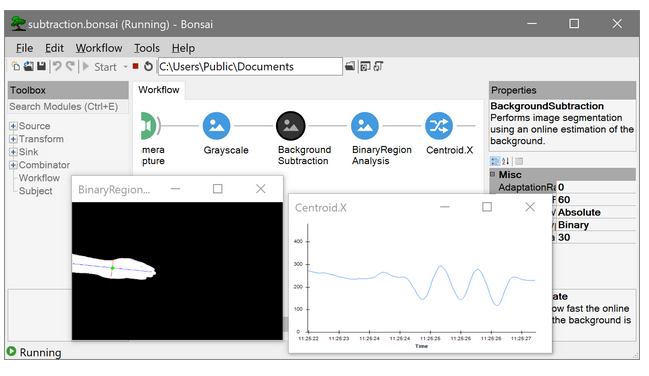 Mark Laubach12:39 PM
Another great resource for tools is https://open-ephys.org/. The provide open systems for recording brain activity using electrodes or calcium imaging (miniscopes) and other tools for behavioral studies such as pyControl. Preassembled items can be purchased for low cost or you can download the designs and parts lists yourself and make stuff on your own.

Lex Kravitz12:39 PM
@Leonardo Gomes I love Bonsai - our lab uses it for many things :) It can also interface with Arduino really easily for controlling hardware.

Thomas Shaddack12:39 PM
random thought. some sort of nanoparticle that could be embedded in the neuron membrane and mediate the signal. nanoelectronics that could emit an electromagnetic signature a nearby receiver can catch. something small enough with polar sides and nonpolar ring, mimicking the transmembrane protein structure.

Leonardo Gomes12:39 PM
@Lex Kravitz this may be very useful for my projects!

Thomas Shaddack12:40 PM
can the calcium imaging trick be used in vivo?

The miniature fluorescence microscope described here is based on a design pioneered by Mark Schnitzer's Lab at Stanford and published in a paper in Nature Methods in 2011. It uses wide-field fluorescence imaging to record neural activity in awake, freely moving mice.

Read this on Miniscope

Lex Kravitz12:40 PM
@Thomas Shaddack it can! A group at UCLA made a miniature microscope that can ride on the head of a mouse and image calcium activity in the brain:

Lex Kravitz12:41 PM
This video shows a mouse running down a 25 foot long track, along with the calcium activity of ~500 neurons being recorded from an area of the brain called the hippocampus

Thomas Shaddack12:42 PM
@Mark Laubach oohhhh! could this be done with motor neurons? possibly even without optics, leveraging the minuscule size of sensor pixels (0.8 to 2.5 micron side squares)?

What's the signal? IOW, how is calcium flux being measured?

Mark Laubach12:42 PM
@Thomas Shaddack My lab does not use the miniscope, but it works well in the cortex, and does single photon imaging 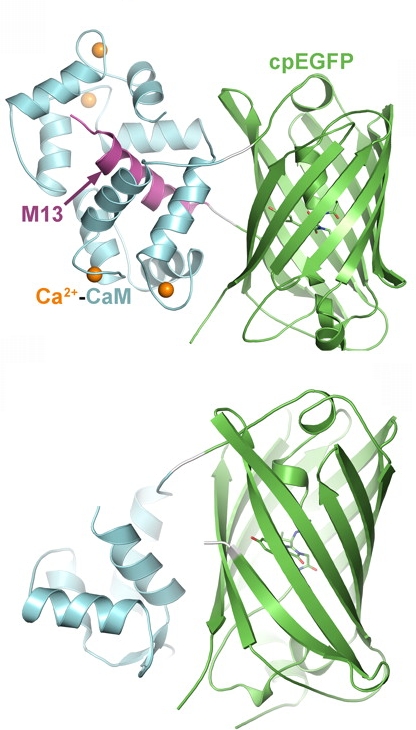 GCaMP is a genetically encoded calcium indicator, or GECI initially developed by Junichi Nakai. GCaMP is created from a fusion of green fluorescent protein (GFP), calmodulin, and M13, a peptide sequence from myosin light chain kinase.

Lex Kravitz12:43 PM
The family of sensors for calcium imaging were developed by a group a the Janelia Farm Research Campus https://www.janelia.org/open-science/gcamp

Cool. Not toxic to the mice I guess?

Thomas Shaddack12:43 PM
for high sensitivity single-pixel sensing, i saw some pretty nice SiPM, silicon photomultipliers. 1x1mm or 3x3mm chips, often paired with scintillator crystals for gamma sensing but could work with fluorescence or other light emission too.

Thomas Shaddack12:44 PM
just add 30volt bias and you have pulses going out.

Lex Kravitz12:44 PM
They've been really generous about sharing these sensors with the scientific community which has enabled many labs (including ours!) to do this type of recording

Mark Laubach12:44 PM
Janelia has been awesome to the community

Thomas12:44 PM
Ca++ indicators should be great for glia research

Mark Laubach12:45 PM
@Thomas yes and there are viruses that selectively target glia

Oh, OK - it's not a tracer but a transgenic mouse whose brain lights up when neurons fire.

Did I really just write that sentence?

DrG12:45 PM
@Mark Laubach Do you collaborate with the Psych folks at AU?

RichardCollins12:45 PM
@Thomas Shaddack I found a group that was attaching molecules to a nano structure. They could tell by the change in conductance the forces on the attached molecule. Using molecular modeling they followed the binding and chemical events. Definitely possible. It all uses the same signal amplifiers, ADCs, data storage, high speed local signal characterization and monitoring, shared datastreams, open communities working out algorithms and interpretations. Global communities working together.

Thomas12:46 PM
I read the photometry paper. quite interesting.

Mark Laubach12:46 PM
@Dan Maloney Yes you did, and isn't all of this so freaking amazing!

Mark Laubach12:46 PM
no one could have imagined this stuff 100 years ago

Lex Kravitz12:46 PM
@Dan Maloney Shhhhhhhh! Don't ask about toxicity!!! :) Honestly this is a big concern - virally expressing any foreign protein carries the risk of toxicity or immune responses. The short answer is to do experimental controls for toxicity, the longer answer is about deciding what controls are best for the specific experiment, testing how much toxicity is too much toxicity...

Thomas Shaddack12:47 PM
can these tricks be used on transgenic organoids?

mumi12:47 PM
@Mark Laubach does attempting to discuss consciousness still self-assign one the title of "whack job" in the neuro community? asking after having watched Jeff Hawkins talk about this about a decade ago.

Mark Laubach12:48 PM
@mumi It might depend on what you mean by consciousness. I am involved in a project with an epilepsy group that takes the issue really seriously. They mean being conscious.

mumi12:49 PM
interesting. would be cool to read up on their meaning.

Mark Laubach12:49 PM
The group is headed by Dr Hal Blumenfeld at Yale, and is about finding a way to stop frontal seizures.

Bye for now, wish I could stick around.

mrdale195812:50 PM
@Mark Laubach do you know where this research led? https://www.newscientist.com/article/mg22329762-700-consciousness-on-off-switch-discovered-deep-in-brain/

Lex Kravitz12:51 PM
Another resource for diy bio and neuroscience is backyard brains https://backyardbrains.com/ They make amplifiers that are pretty cheap and very capable - they also have great documentation and projects.

Lex Kravitz12:52 PM
@Charlie Lindahl Thanks for stopping in!

Mark Laubach12:53 PM
Backyard Brains is awesome for teaching. I use it for an undergrad class. Students build a rig for measuring reaction times, using Arduinos and simple components. This past fall, we incorporated low cost EMG amps from BB into the project. And then we analyze data in Jupyter notebooks and Python.

Thomas12:54 PM
what's the cost per channel? how many channels are required?

Andre Maia Chagas12:55 PM
@Mark Laubach do they have previous experience with python and Jupyter notebooks?

We are thinking about having a "digital bootcamp" for grad students that are starting, and out here they start with very little programming experience

Mark Laubach12:55 PM
we teach them the basics of hacking and how to use jupyter and python

Mark Laubach12:56 PM
the bootcamp must start with how to install programs

Lex Kravitz12:56 PM
@Thomas I think this would depend on the application and how many channels of data you want. I bought a few of the backyard brains shields for doing electrical recordings from plants (another Hackchat topic??) They cost me between $100 and $200 per channel depending on which one you buy,

Mark Laubach12:56 PM
sadly, this basic skills seems to have been lost due to smart phones and Macs

anfractuosity12:56 PM
intriguing, that wasn't with venus fly traps was it per chance?

@Lex Kravitz - Yes, definitely a Hack Chat topic. I'll email you on that

Mark Laubach12:57 PM
yep.... those skills are crucial, and no one teaches them

Lex Kravitz12:58 PM
I wanted to throw out another aspect of open-source hardware that is less techie but has been useful for our lab - 3D printing things that otherwise cost hundreds of $$$. We've made some simple designs that have been shared pretty well, and cost ~1% of what the product would cost commercially. Science budgets are always tight so I think this type of thing can make an impact: https://hackaday.io/project/163510-3d-printed-rodent-stereotaxic-device https://hackaday.io/project/167972-mouse-brain-matrix