For Making and Breaking Hardware HackChat

We're going to be talking with bunnie about hacking electronics and manufacturing in Shenzhen! 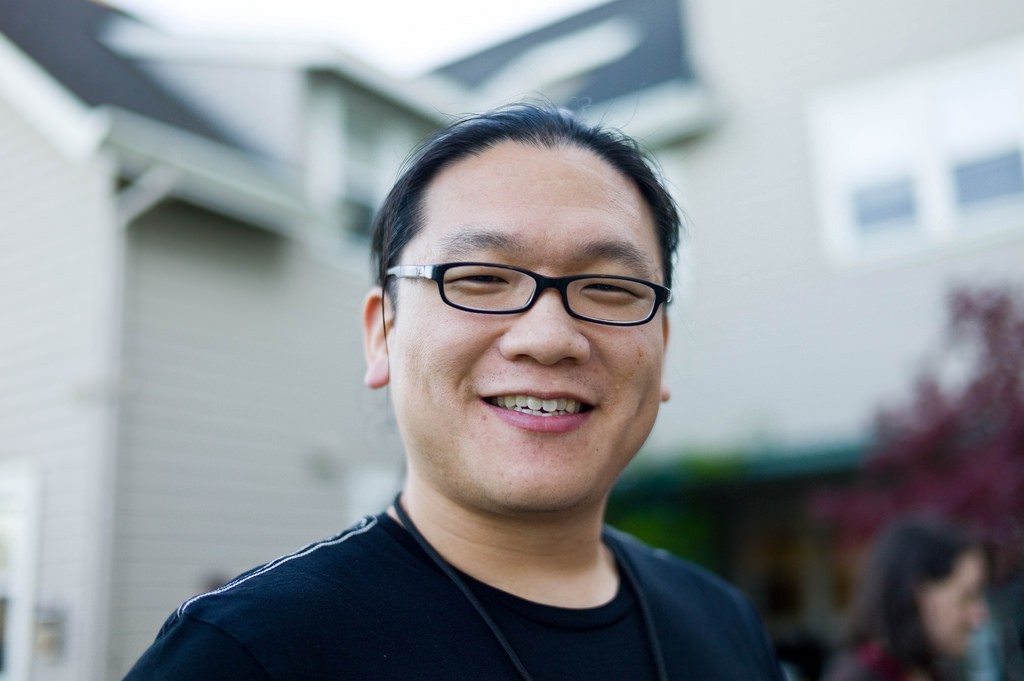 Bunnie Huang is a legend. He’s not just a hardware hacker: he’s a hardware creator, author, and one of the most outspoken folks sharing knowledge and experience from the world of electronics design and manufacturing.

Back in February, Hackaday.io had the honor of hosting a hack chat with Bunnie, where the Hackaday.io community could ask him whatever questions they wanted. We thought the result was interesting enough to bring the conversation outside of the chat window. We’ve cleaned it up a bit (and rearranged replies to account for inevitable chat question/response asynchronicity), but the following is a short summary of the event:

Introspection Engine and Playing the Monitor

Bunnie’s latest projects include Love to Code and NeTV2, but the one that has garnered the most attention is Introspection Engine, a device he’s working on in collaboration with Edward Snowden. Its goal is to help dissidents in high-risk situations know if their communications are being monitored.

Bunnie: Introspection is based on a K22F kinetis CPU and an ICE40 FPGA. The idea is to create a solution which is resistant against state-level adversaries to report if a phone is being monitored. The system reports to its own UI. That's pretty fundamental. The idea is you don't trust or respect third party user interfaces and you really want to be able to validate the entire path from signal to UI.
So, the basic architecture is to find points in the phone which are absolutely, at a physics level, essential for transmitting radio data. Then, we monitor that. If those become active and for some reason we're told they are not supposed to be active, then we know we're probably compromised. So, we have our own separate processor to implement a UI on a separate screen.

At first, just knowing that you’re being monitored doesn’t sound very useful, but it’s important to keep in mind the greater context that information gives you. The more information you have, the better equipped you are to make good decisions about what to do next.:

Being a hardware developer, Bunnie has immersed himself in the Chinese hardware ecosystem. In 2013, Bunnie coined the term “gongkai” to describe the ecosystem that has evolved around the open-but-not-quite-open-source sharing of hardware designs (confidential or otherwise) that happens regularly in China. This loose attitude toward sharing IP and documentation has lead to a thriving ecosystem of constantly evolving hardware that’s much cheaper than anything you can buy in the West. Of course that begs the question: Can the West adopt that culture?

Bunnie: I feel that honestly, most likely it will not. The reason I think gongkai won't make it to the West isn't because of physics or language. The major reason is that the Western IP fundamentals were drafted in an era where the Internet did not exist.

For example, when you refer to a cat meme, you don't ask who owns the copyright to the image of the cat. You just feel somehow empowered to "steal" the image originally took and imbued with a copyright by US law and to remix it with a clever subtitle.

In the Gongkai system, we go beyond cat memes to e.g. hardware memes, people feel empowered to remix hardware ideas in the same way that people might remix a cat meme but without attribution to the original photographer of the cat meme.

In the West, we tend to embrace the idea of “open” design through the ethos of Open Hardware and Open Source. You can use open schematics from Adafruit and Sparkfun, open libraries from Arduino, and share your own designs under open licenses, but Bunnie notes that it’s not quite the same as gongkai culture.

Bunnie: The idea is that IP in the internet age is different than IP from before the internet age. When communication was difficult and only heroes could innovate, the traditional IP ecosystem makes a lot of sense. But these days the value of "IP" is more about how viral it is. Consider that if you have a patent on an irrelevant idea, it's pretty much worthless. but if you can be attributed to a major internet meme, you don't even have to sign onto a record label or brand to recognize benefits.

So what if those of us in the West want to jump into that ecosystem? Many private sector IP agreements and contracts can be repressive in how they view employee IP creation or contribution. As one user put it during the chat, “Just because it's dreamt-up on your own time doesn't mean they don't think they own it.” What sorts of issues can we run into when we want to participate in gongkai culture ourselves?

Bunnie: I think the core idea is that "there is another way". It's something I'm slowly discovering coming out of my definitively American cocoon. I bought into the American IP way until about the age of 30, when I was really challenged by the ecosystem to think about what it meant to contribute IP to the ecosystem I was brought up to believe in. It was a reality check when I had to negotiate a license on a patent for something I had invented and open-sourced but my VC overlords had insisted I applied patent protection for.

That's a situation I'm pondering all the time. How do we protect the open ecosystem against the interests of others? It's not like GPL where copyrights are "free" and you can use that mechanism to protect your ideals. Patents require real money to prosecute, unlike copyrights. I'm experimenting to see how we can support the community but for obvious reasons it's challenging.

Get to Know Your Suppliers

Given the differences between China and the West, participating in the Chinese hardware ecosystem also brings the potential for embarrassing cultural missteps. One of the most important ideas is to recognize and communicate with others there as the individual people they are, not just the opportunity they might represent. Get to know them and value them for who they are as people!

Bunnie: If I were to give any singular piece of advice, it would be to try to value the person across the table from you as a human being and not as a resource for your project. I know that sounds like an over-simplification, but one thing that was shocking to me as an American-born person was how much things are "up for negotiation". You don't walk into a Target and try to negotiate the price of your goods. But in China, you're expected to. And part of it is that, somehow, in America, all humans are considered equal and thus you can fix prices but oddly enough when you're in a society where if people are from your home town and you want to be able to give them an insider discount, that breaks down. So getting to know the person trying to negotiate the deal in front of you turns out to be really important, in this culture, to success.

I think the general principle of valuing people for what they are is something that is broadly applicable across gender and creed, but fortunately the principle is so sound it applies in the fractal situation of a business transaction.

There’s a lot to consider here. A huge thanks to Bunnie for taking the time to answer the Hackaday.io community’s questions, and for sharing his insights with the greater community at large!

Hack chats are a great chance to ask questions or get feedback from well-known folks in the hardware community, and we have a different speaker every week. Be sure to check out the upcoming hack chat page to find out who we’ll have talking next.

All chats take place in the #Hack Chat, request to join!

Please note that this chat takes place at 9a PST Feb 10th.

This week we're excited to host open source pioneer bunnie of Bunnie Studios. Bunnie has an excellent new book out, Adventures in Making and Breaking Hardware.

“Hardware, says Bunnie Huang, is a world without secrets: if you go deep enough, even the most important key is expressed in silicon or fuses. His is a world without mysteries, only unexplored spaces. This is a look inside a mind without peer.”
—Edward Snowden

He also wrote The Essential Guide to Electronics in Shenzhen. This book was written to help navigate the extensive and many electronics markets in Shenzhen.

Drop in for 30 minutes to chat and ask questions. NOTE TIME IS 9a PST.

All chats take place in the #Hack Chat, please request to join! 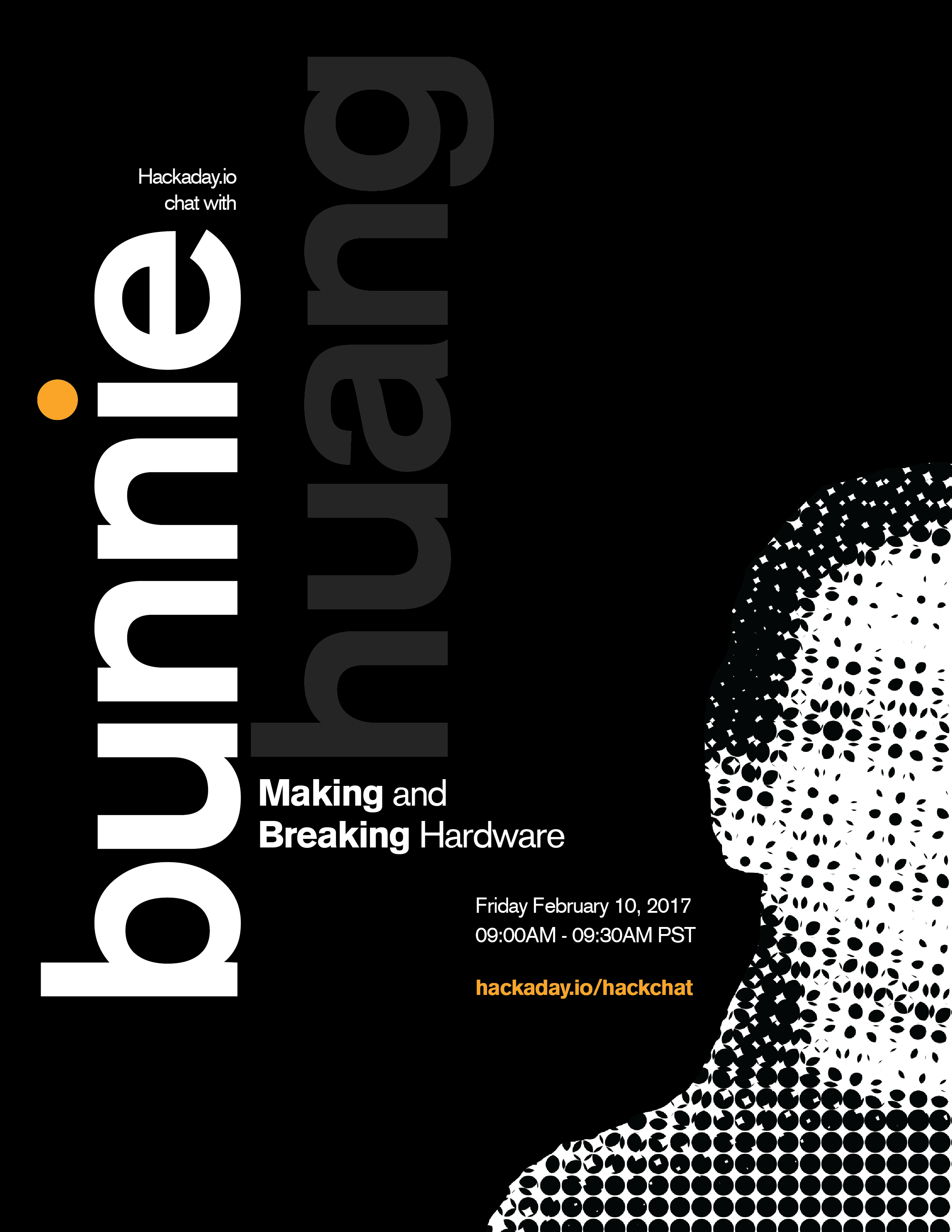