A short note on the differential input (hacking into the analog).

The main component of the analog front is an instrumentation amplifier. An instrumentation amplifier is a closed-loop gain block that has a differential input and an output that is single-ended with respect to a reference terminal. Most commonly, the impedances of the two input terminals are balanced and have high values, typically 109 Ohm, or greater. The input bias currents should also be low, typically 1 nA to 50 nA. As with op amps, output impedance is very low, nominally only a few milliohms, at low frequencies. An in-amp employs an internal feedback resistor network that is isolated from its signal input terminals. The following figure shows a resistor bridge preamp circuit. When sensing a signal, the bridge resistor values change, unbalancing the bridge and causing a change in differential voltage across the bridge. 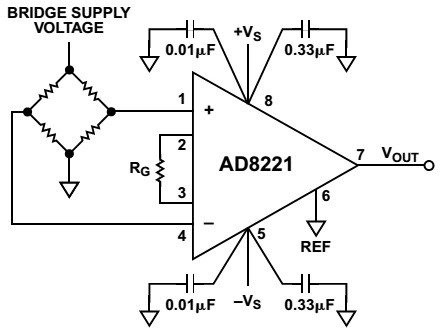 The signal output of the bridge is this differential voltage, which connects directly to the in-amp’s inputs.

The following figure is the differential input into the multi-meter. The input signal is conditioned, reduced in amplitude by the input divider then applied to the instrumentation amplifier.

HV Input is physically connected to the handheld test probes. Voltage is measured in the differential mode (potential difference between positive and negative probes) with U33 (AD620A). The in-amp will normally reject the common-mode dc voltage, or any other voltage common to both lines, while amplifying the differential signal voltage, the difference in voltage between the two lines. Instrumentation amplifiers are very effective in extracting weak signals in the presence of background noise. The handheld test leads are basically long wires with probes. They will act as wire antennas that couple well into 60 Hz AC interference generating 60 Hz voltage on both leads. The good thing is that both of the leads generate in phase voltage that appears as common mode input to the In Amp. In Amp is designed to reject these kind of signals. 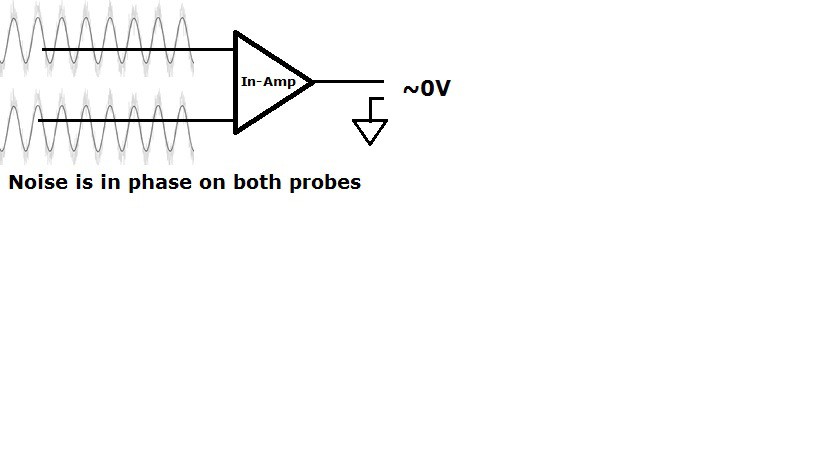 Common-mode rejection (CMR), the property of canceling out any signals that are common (the same potential on both inputs), while amplifying any signals that are differential (a potential difference between the inputs), is the most important function an instrumentation amplifier provides. Both dc and ac common-mode rejection are important in amp specifications. Any errors due to dc common-mode voltage (i.e., dc voltage present at both inputs) will be reduced 80 dB to 120 dB by any modern in-amp of decent quality.

AD – is the differential or normal mode gain. The gain between input and output for voltages applied
differentially (or across) the two inputs.

An in-amp needs to be able to amplify microvolt-level signals while rejecting common-mode voltage at its inputs. 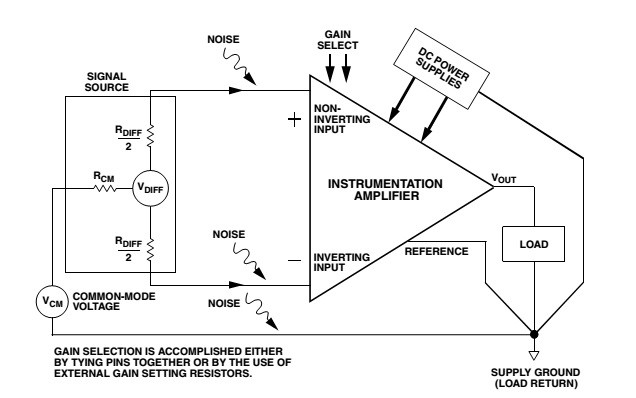 Since an ideal instrumentation amplifier detects only the difference in voltage between its inputs, any common mode signals (equal potentials for both inputs), such as noise or voltage drops in ground lines, are rejected at the input stage without being amplified.

All mentioned above is the main reason why I used instrumentation amplifiers in the handheld unit.

You can find more about instrumentational amplifiers in “A Designer’s Guide to Instrumentation Amplifiers” published by Analog Devices.

A basic volt-level indicator using LM339 comparator and a row of four LEDs.