It's that time of the year again, the world maker faire is on in New York and Berlin is like "yeah, we can do this, too!" - what a lovely attitude.

We're showing off new boards, projects and webcam scripts before we hit the roads for some delicious Mexican food. 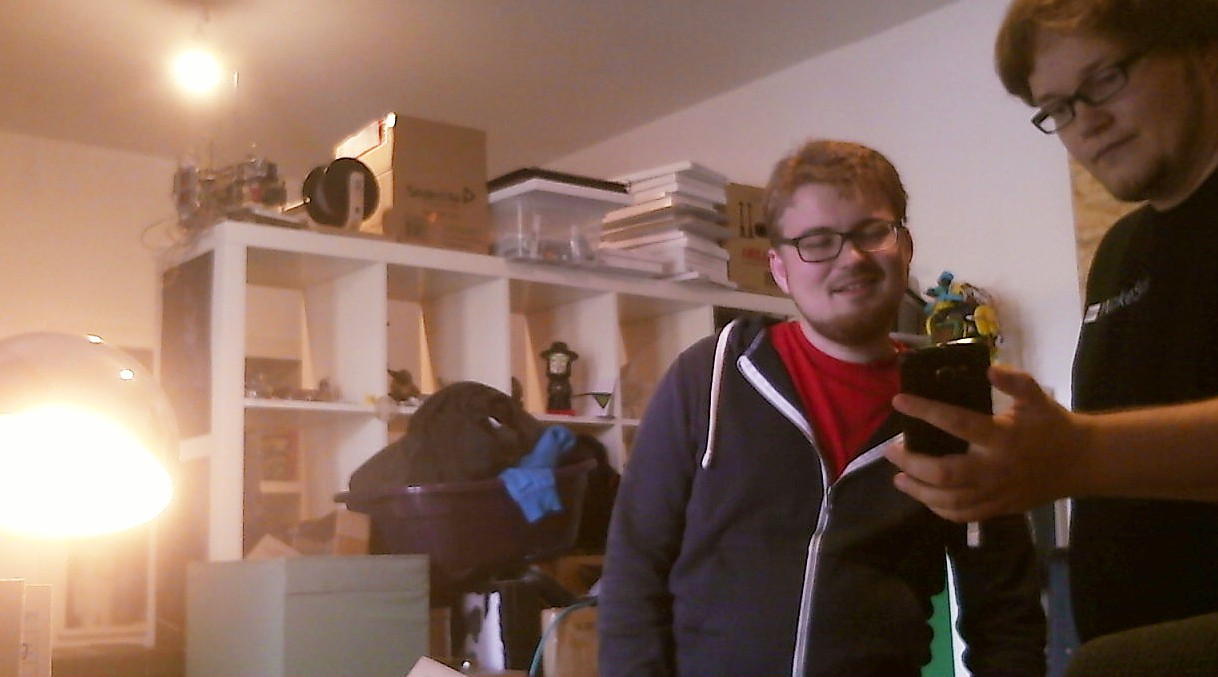 Returning home at 3am, being the most innocent people of the world, we were shocked when 4 wild R2D2s appeared. 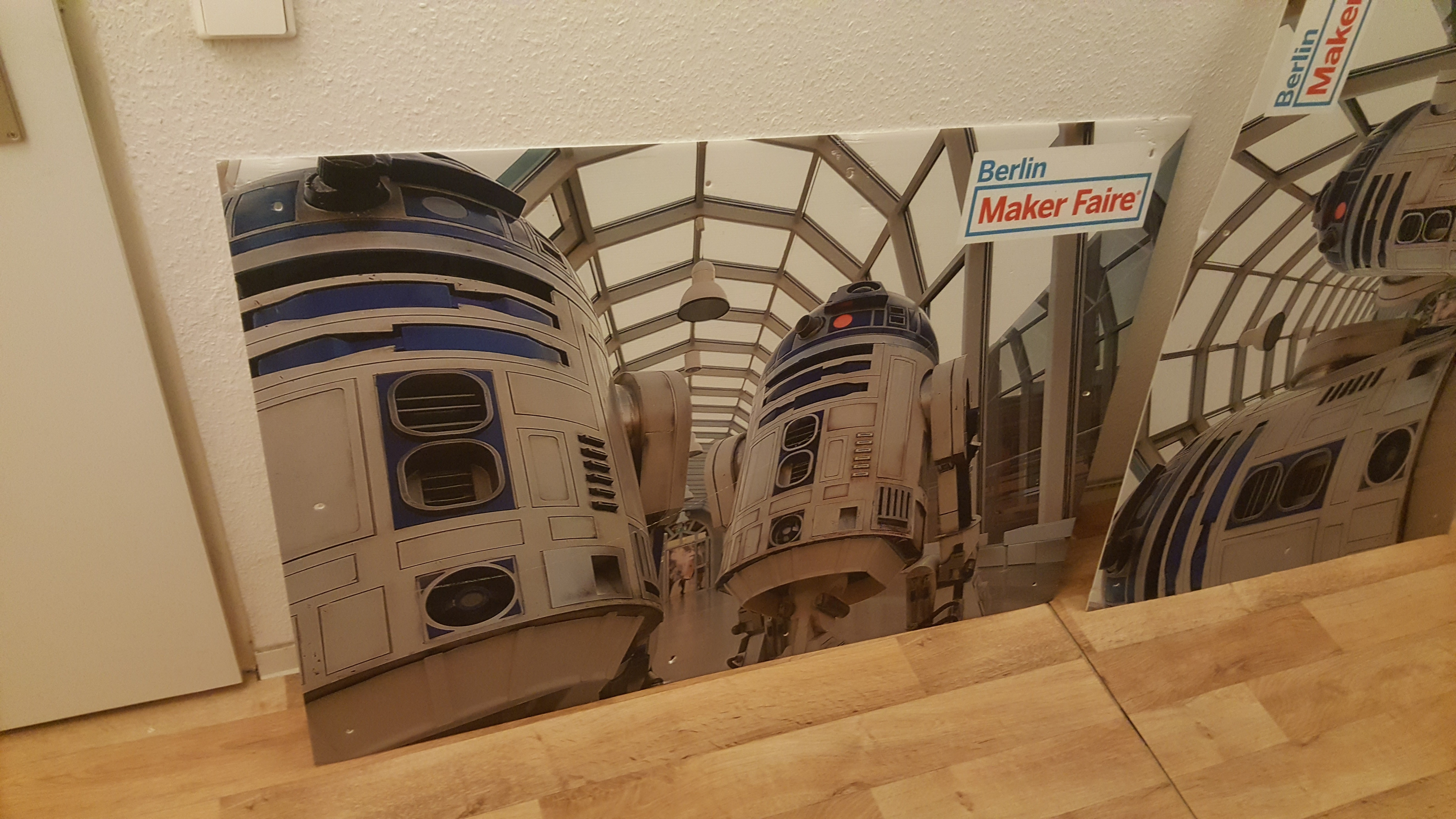 Greeted by an angel of LEDs we walked into the halls of http://www.station-berlin.de/de/ - much bigger than the last years location called "Postbahnhof". Nice cosplay! this guys robots (well obviously also Radomirs bipeds) made me want to build some as well, clothed as a penguin :3

they have some interesting stuff coming about suspending movements and oscillations with cheaper tools than currently available.

Michael makes laser-cut wood models from Leonardos designs! His newest, not yet released model is the maestros tank and I asked if they were any pitfalls implanted and they sure were, one of those wheels was on another position in the designs. 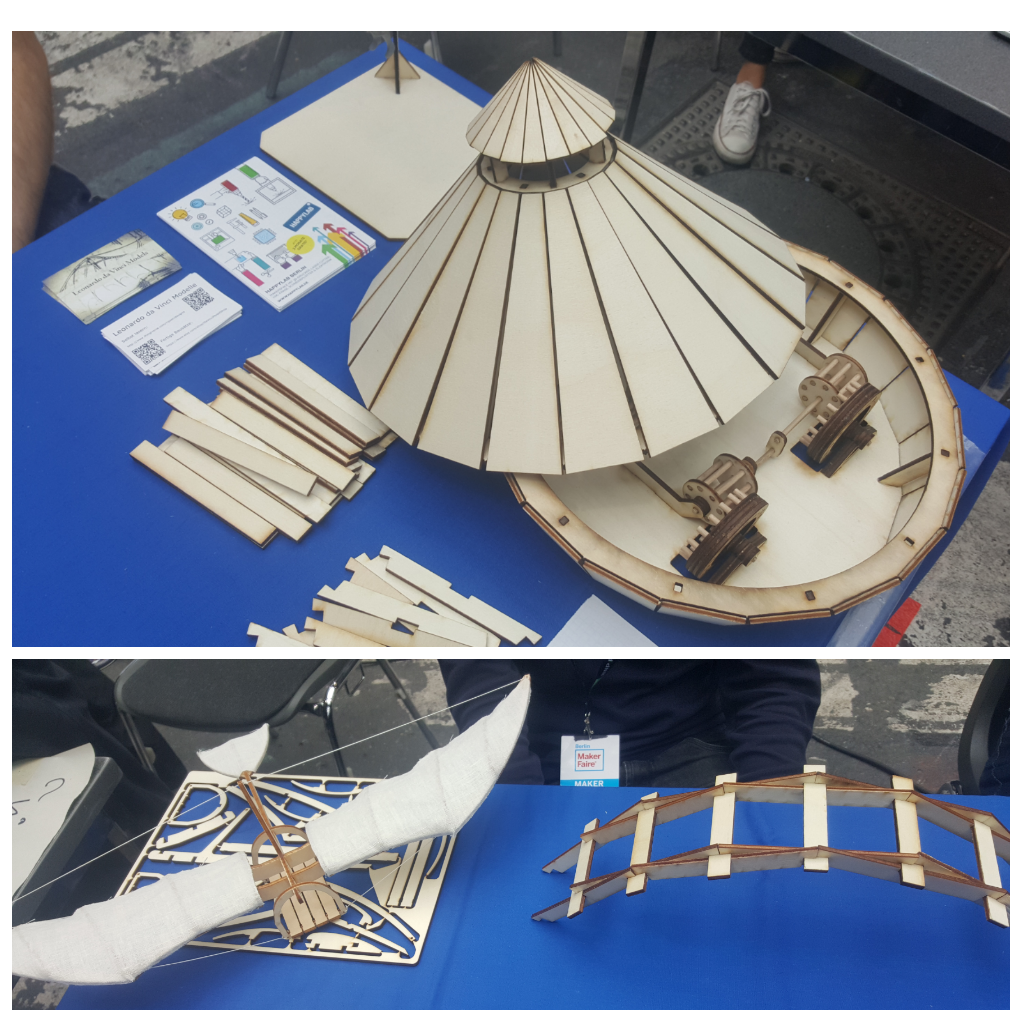 This guy has some projects in his corner! - converters, VU-meters, Joule thiefs, induction hexacopters, lots of blinky stuff. Especially his acrylic encasings that he all hand-coloured with a text-marker to make them all match a red and blue pattern. Definitely entertaining.

Sadly I can't find it anywhere so I can't tell you who made it or how it works, but I think it's a 5 servo per plant setup controlled via DMA to pwm converters.

They had a big stand where they sold their stuff. No shipping fees and they had PI zeros - you just had to ask!!! (one per customer - as usual). Anyone ideas what a pi zero cluster could actually work on? Well if not, then maybe the next stop would spark some interest!

This dalekian sweety built by James Mitchell is a two times [RPi3 | 4 RPiZ] - cluster taking 360 degrees stitched pictures. It's not the only project of the RJB though, since this is a quarter-yearly meeting of RPi aficionados who talk about what the platform is capeable of. They have links to flickr, instagram and all the other social stuff on their site. 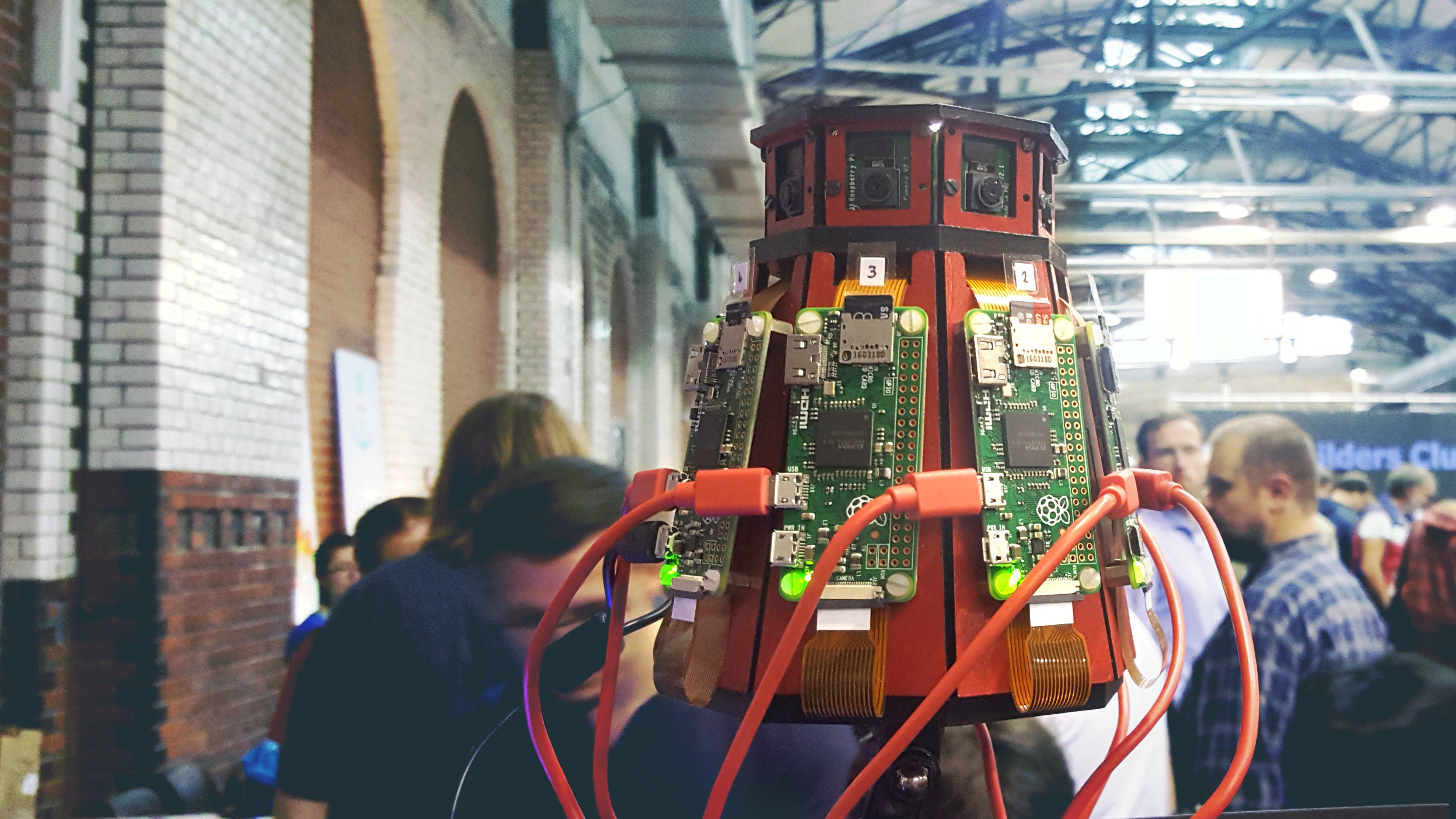 wandering around the tables I noticed a necklace with an RGB LED pendant and a big box wired to it. When Liana Lessa then showed me it was an Arduino / GPS / BTLE / compass / math Project, I was happy that I walked up to talk. It's intended for long distance relationship couples to know when they are facing each other, but could also be used for places of interests like religious places, Tosche-station or favourite foodcourts {insert: forever alone meme}.

THey were selling some kits and blinky things, but me and @al1 where all in for the flipdots! As always - expect stuff from us ;) Sadly they don't hand out datasheets or footprints, so we have to start there. Maybe if you ask nice you'll get them. 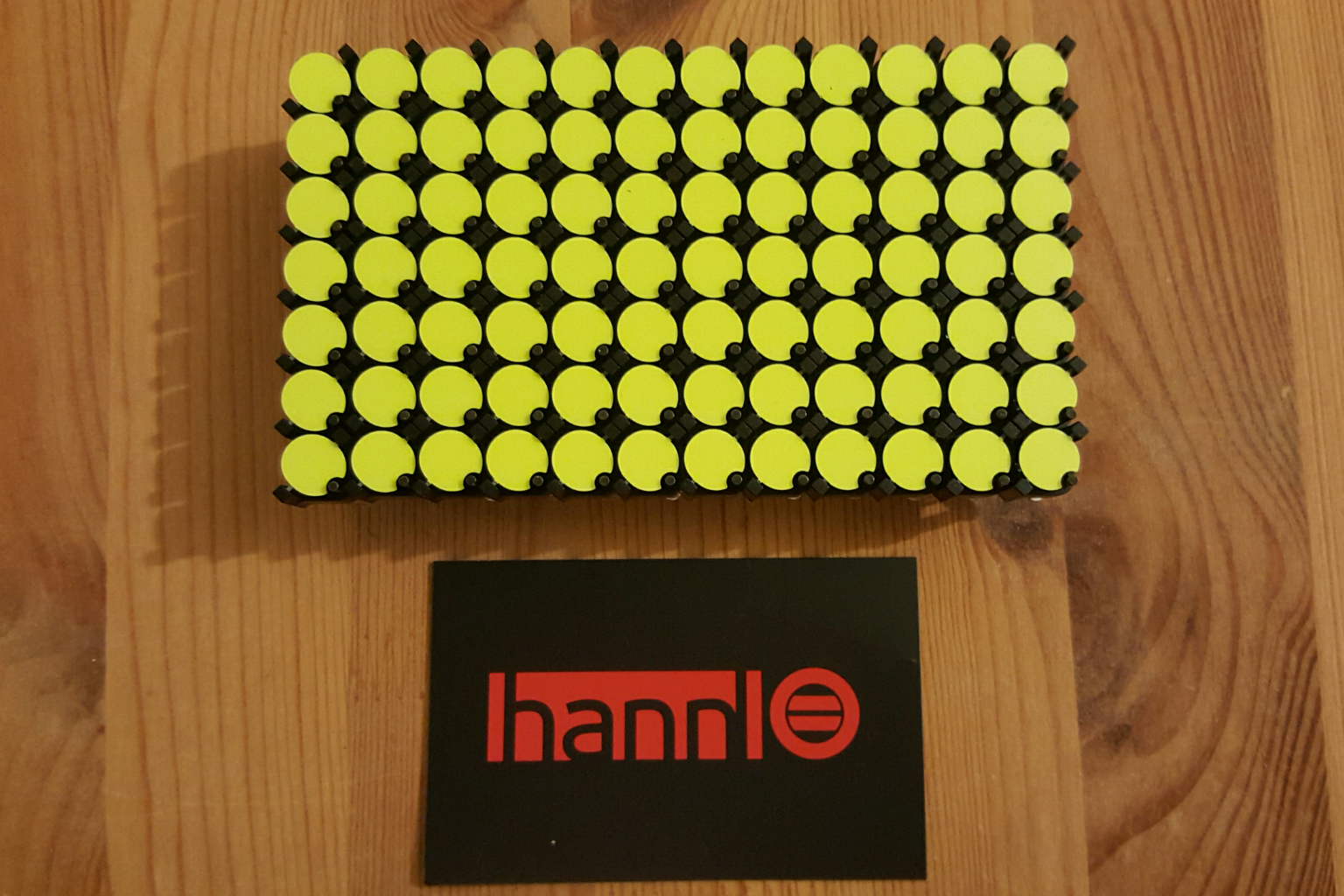 They gave a short talk about how they would design and prototype boards and how they started their own community and learning sections around not only their designs. Good guys! I also tried to convince them of an addendum to their title: "Pimoroni presents: Pirate Parables of PCB Product Production".

Publishing projects is something the one or other hacker could work on to improve, so Felix gave a talk about what is usually needed to get going and how frustrating it can be if you want to start a project you like, but the doc is just not there. He also made this 'github' grabber for hardware projects and it's great! It rates and categorises projects based on documentation and gives you inspiration by search, this is a nice tool to extract all the goodness from github. Aisler also has some affordable PCB service made in Germany, it's a mix of all you've heard so far - basically 3 boards of 1 design, but price is 80ct/cm2 per board, min dimensions are 10x20mm - so basically a german based OSHpark that's 3 times the price.

Lots of Workshops and cool stuff

There where a lot of soldering workshops out in the open, not just hidden in a room somewhere. All in all it was a really haptic and "hey try this out" experience, much more than last time. I didn't catch the guys name or contacts and his stand is called "atrwork" - basically blinky stuff in epoxy.