Dysgenesis of the Corpus Callosum

In the Autumn 22 years ago, my eldest daughter was born. She looked perfect, and did all the things babies should do, for a little while at least. But she didn't sit, took 4 years to learn to walk and has never said anything more than 'B'. What little I have managed to find out about others with the condition, this sort of thing is not unusual and often earns them a nickname. Her name is Keri, but I've always called her Bea myself, long before I knew anything much about her condition.

By the time she was two, me and her mother were at breaking point, knew something was wrong and were tired of chasing doctors as to what exactly. We ran out of doctors who didn't shrug eventually, and wound up in London for a few days and a battery of tests that Bea didn't like much. In the end they stuck her head in an MRI to have a look.

I remember there being a lot of muttering before we were approached and given the diagnosis. What did that mean, I asked, to be told that there hadn't been enough documented cases for them to refer to statistically, and she couldn't even be given a life expectancy. They'd never even seen a case themselves, although they had heard of it. Of functionality, they had no idea either, and could only tell me what was wrong:

The Corpus Callosum is a bundle of nerve fibre buried deep inside the brain that connects the two hemispheres together directly, and forms the main bridge for communication. 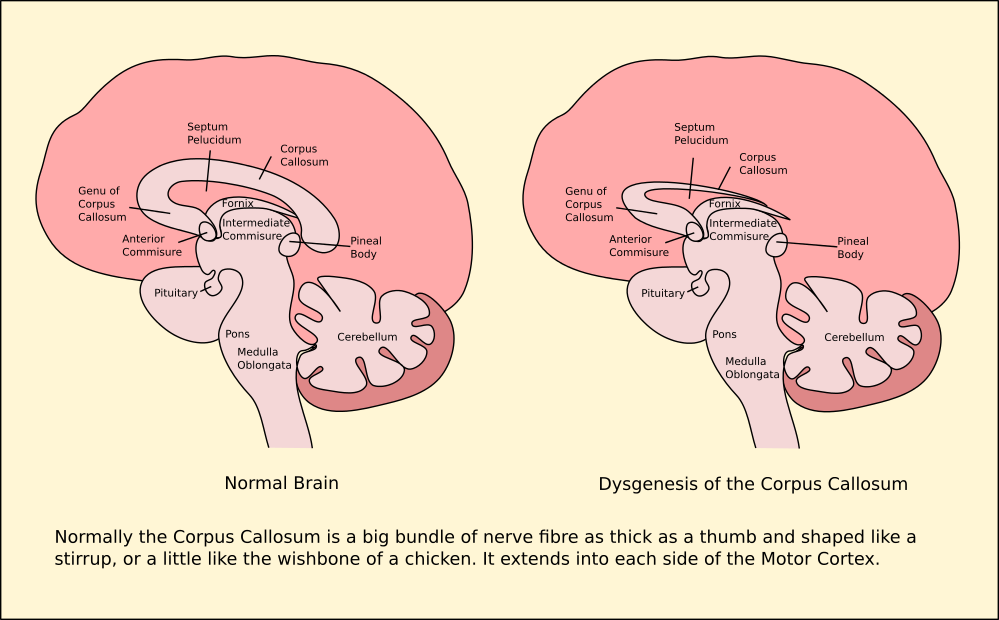 Bea's didn't form correctly. This is what dysgenesis means, sometimes it is called agenesis where it is completely missing, but she has one, if only a vestige. It means that it takes her a long time to figure out things properly, because normally, emotional content is processed in one hemisphere and logical content is processed in the other. It must mean that she is literally in two minds about things, although she has one distinct personality. She doesn't understand what it is she likes/dislikes about something, and its hard to like something you don't understand, so it must be difficult for her. She is happy and friendly though, and everyone likes her.

Brain tissue is highly plastic, especially when young, so if it is damaged it does it's best to re-route signals and re-establish function. Bea was born this way, so to route signals around a missing part of her brain, it has co-opted other processes, degrading her motor function and presumably giving her Synaesthesia too. Speech is processed and articulated each by different hemispheres, so her brain thinks it is speaking, and at the same time doesn't know what to say. These are known as aphasias, and it is unusual to have both of them. It also affects symbolic communication, so she is as unable to write and sign as she is to speak. But she does understand, and like me has a photographic memory. She notices even small changes in things and points them out with an accusing smile; 'Hey, you moved that picture!'

Most people have heard of Rain Man, the film with Dustin Hoffman as an auteur. Some people are aware he studied with an auteur to learn his part well enough to treat the subject with the dignity and respect the film had, but very few are aware who that was. It was Kim Peek, a man from Utah with brain abnormalities including Agenesis of the Corpus Callosum. Like Bea, he presented as autistic, but he was also savant - he had a phenomenal memory and perfect recall. Unfortunately, since 2009 Kim is no longer with us. Until his death though, he lived with his father and enjoyed limited fame with his abilities.

Like Kim's family, my relationship with Bea's mum didn't survive, and I was left to raise her and her sister alone after a traumatic breakup. I've become her voice and her hands, and now she is an adult I'm her advocate as well as her carer. I've been asked many times why I've done this, being as polar as we are. Raising two daughters, one of whom needs everything doing for her has given me strength I never even knew I had.

Sometimes, I look at my hands and think of all the things they've made, repaired and handled, and I find it hard to believe. Then I look again and think of all the years they've helped her up and put on plasters, wiped away tears and snot. All the teeth they brushed, miles of hair they plaited, buttons they've done up, and I know why.

Because the rest of it means nothing without them.

You are the HERO!

Hello, you write "auteur", why not "autist" or "autistic person" ?

Because "Auteur" is, or was, the least offensive term here in the UK. Cultures differ, and times change however. Some of us are proud of it, and some are not...

Besides, "Auteur" is recognised by whatever dictionary HaD uses, and I wont argue with that. :-)

I was just curious, since I couldn't imagine it was a typo or a misunderstanding :-) I've never seen this term used this way so I had to ask.

I have a suspicion its more popular here because it sounds all Continental and mysterious to the British ear, but dont know how it came to be. HaD's dictionary is international so its anyone's guess, I never gave it a second thought.

Thank you to all of you, who have posted, liked and followed since I joined Hackaday... Gentlemen and scholars, I came looking for such good company and found where you've obviously been hiding all these years.

You are a beautiful human being, and so is your daughter.

No, thank you, for sharing your story.