One day while I was pulling a dead laptop LCD apart... 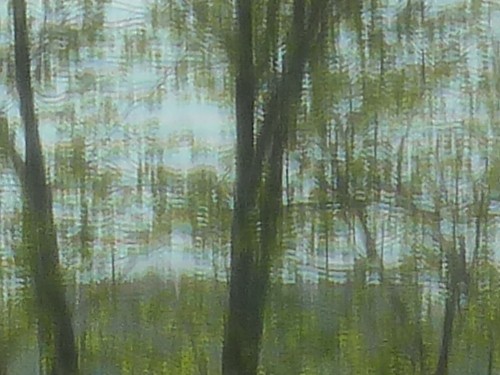 Diffraction gratings aren't new. I thought it was notable that the 3x (rgb) difference in density bracketed some threshold for observing this effect.

I suppose the "threshold" is when the repetition spacing gets bigger than the blurriness.

Here's a laser pointer reflecting off the same panel onto a dark wall. While the vertical line obviously dominates, the shorter perpendicular period from the wider grating appears clearly.

[...and while writing this... scrolling this edit window with the black photo above over a gray background, with OLED screen dimmed in low ambient light - shows that pixels that have been black for a while take a while to respond when turned 'on' to a low level. The black field on either side of the vertical bright stripe leaves a long dark smear that takes noticeable time to come up to gray. Not so where the vertical feature was keeping pixels warm before the dark trailing edge passed momentarily. The leading edge of white (lighter gray) text suffers no noticeable delay. Raising screen brightness reduces but does not eliminate the smear. I'm pretty sure this isn't a scroll animation effect. Galaxy Tab S2 8.0]