Before we start, I would just like to say in a quite and soothing voice, DON'T PANIC!

If you were to quickly glance at the following text and illustrations, your knee-jerk reaction might be to say something like: "Eeek! There are a lot of equations. I don't like math. I'm out of here!" While it's true that there is a little math, all of these equations are "easy peasy lemon squeezy." If you can look at an equation like 6 = 2 * 3 (which is the same as saying 6 = 2 x 3) without fainting, and if you understand that 2 = 6/3 and 3 = 6/2 are just different ways of writing 6 = 2 * 3, then you are totally equipped to follow the rest of this column.

Last time, in Part 7, we considered circuits with resistors connected in series (one after the other). In this type of circuit, the current can take only one path, which means the current is the same at any point in the circuit.

By comparison, in this column we are going to consider circuits with resistors connected in parallel (side-by-side). In this case, there are multiple paths the current can take, in which case the current may be different in each path.

As usual, and as an aid to wrap our brains around what’s happening, let’s compare an electrical circuit comprising three resistors in parallel to a water analogy with three branches. 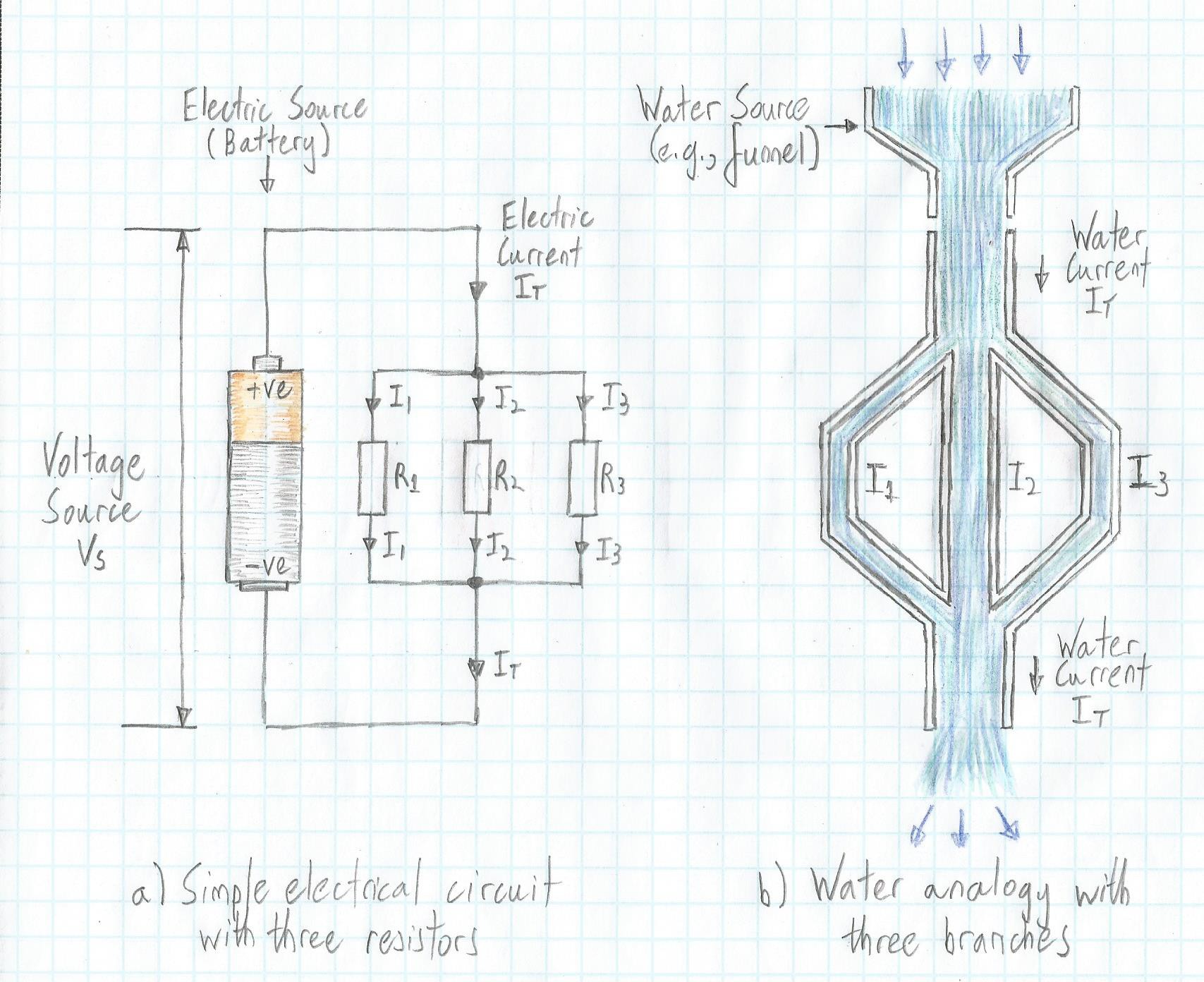 With regard to our analogy, let’s assume that the three pipes in parallel have different diameters. As we discovered in the water analogy we used in Part 2, increasing the diameter of a pipe reduces its resistance to the flow of water. Not surprisingly, more water will flow through the pipes with a larger diameter (less resistance). The same thing is true of electricity, which will also take the path of least resistance (pun intended).

OK, now let’s compare our series and parallel circuits in a little more detail. Let’s start with the series circuit shown as (a) in the diagram below. 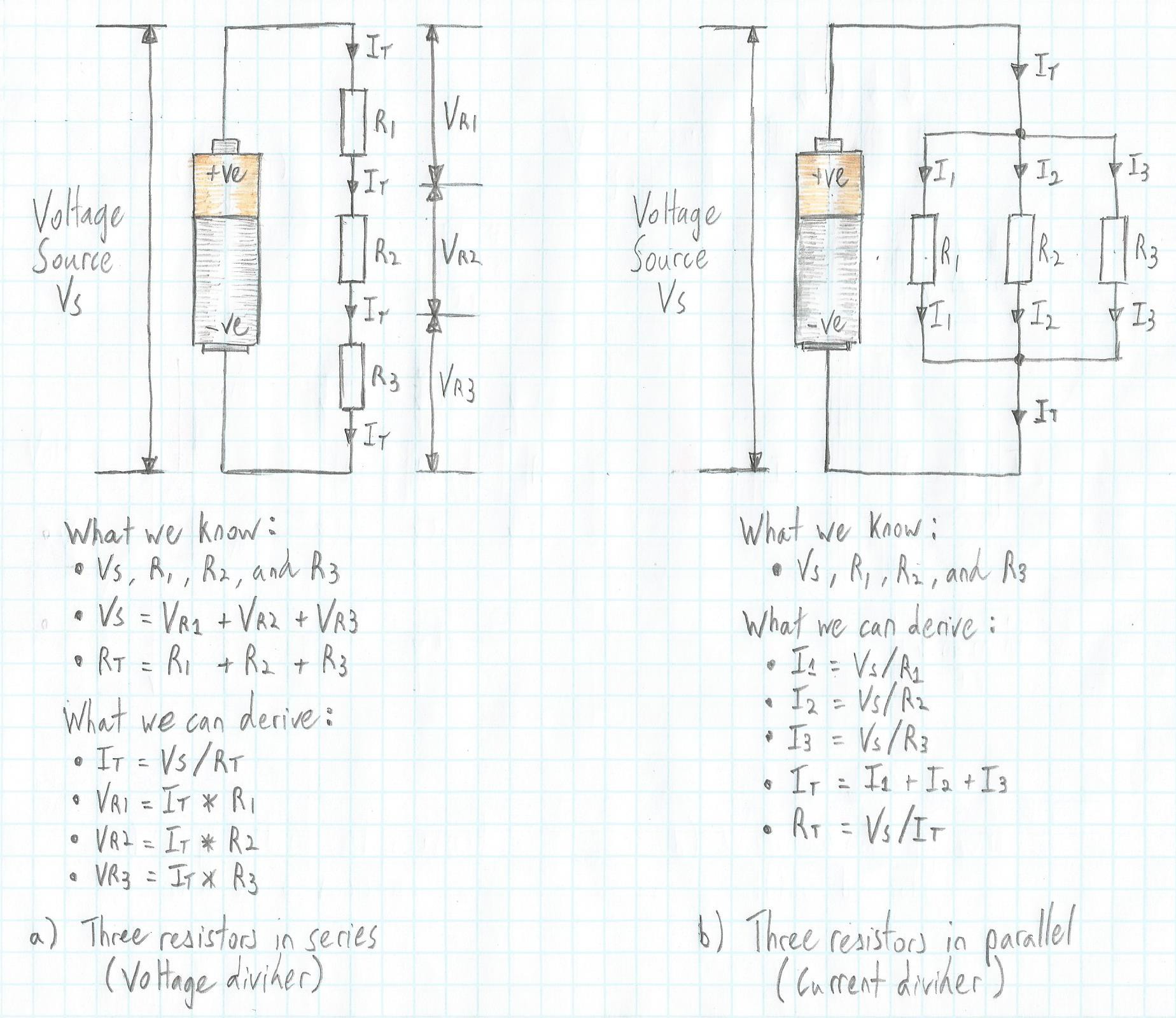 Comparison of circuits with three resistors in series and in parallel (Image source: Max Maxfield)

Let’s start by assuming that we know the values of VS, R1, R2, and R3. We also know that, neglecting any tiny voltage drops associated with the minuscule resistance of the wires, the sum of the voltages across the resistors, VR1, VR2, and VR3, will equal the value of the source voltage VS. Last, but not least, we know that the total resistance of this circuit, RT, equals the sum of the individual resistances R1, R2, and R3. Apart from anything else, this means that the value of RT will be greater than the value of any of the individual resistors (I know this seems obvious, but we are setting the scene for what is to come).

One final point regarding the resistors in series is that, since the current is the same throughout the circuit while the voltage is divided across the individual resistors, this is known as a “voltage divider.” By comparison, in the case of the parallel circuit shown as (b) in the diagram above, the same voltage, VS, is presented to all three resistors while the current is divided between the individual paths, so this is known as a “current divider.”

But wait, there’s more, because – based on our water analogy at the beginning of this column – we can calculate the total current: IT = I1 + I2 + I3. And the fun just keeps on coming because knowing the values of VS and IT means we can use Ohm’s law to calculate the total resistance of the circuit: RT = VS/IT.

Now, as exciting as all this may be, it leaves us with a niggling desire for more. In the case of the series circuit shown as (a) in the diagram below, for example, we can easily express the total resistance, RT, in terms only of the individual resistances, R1, R2, and R3 (the ≡ symbol, which is like an equals sign on steroids, is the equivalence symbol, meaning “is equivalent to” or “is identical to”). 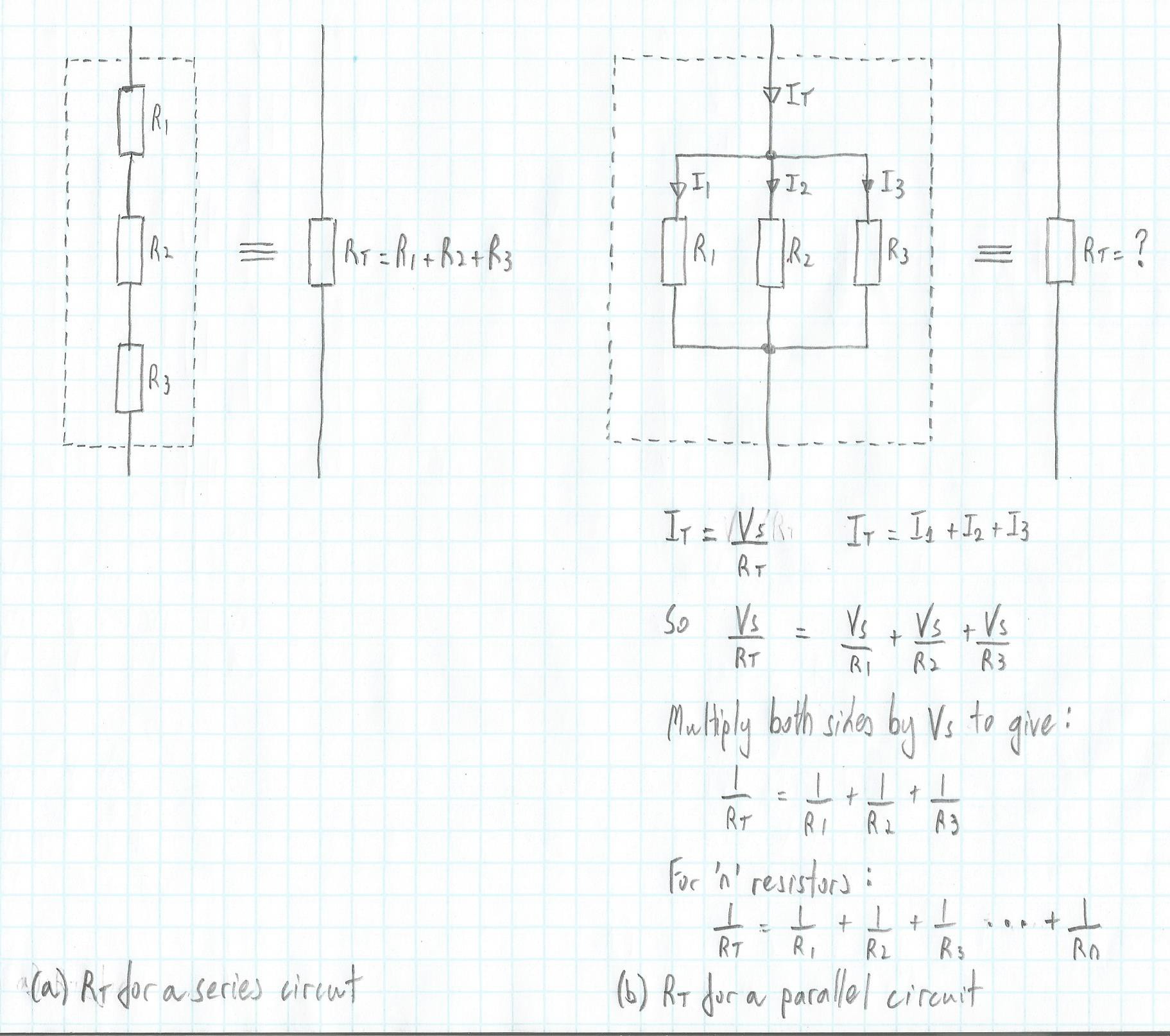 What we want is to be able to do the same thing for the parallel circuit shown as (b) in the diagram above; that is, to be able to express the total resistance, RT, in terms only of the individual resistances, R1, R2, and R3.

We can extrapolate this to a general case for ‘N’ resistors in parallel, which is 1/RT = 1/R1 + 1/R2 + 1/R3 … + 1/RN. A little thought reveals that, apart from anything else, this means that the value of RT will be less than the value of any of the individual resistors. 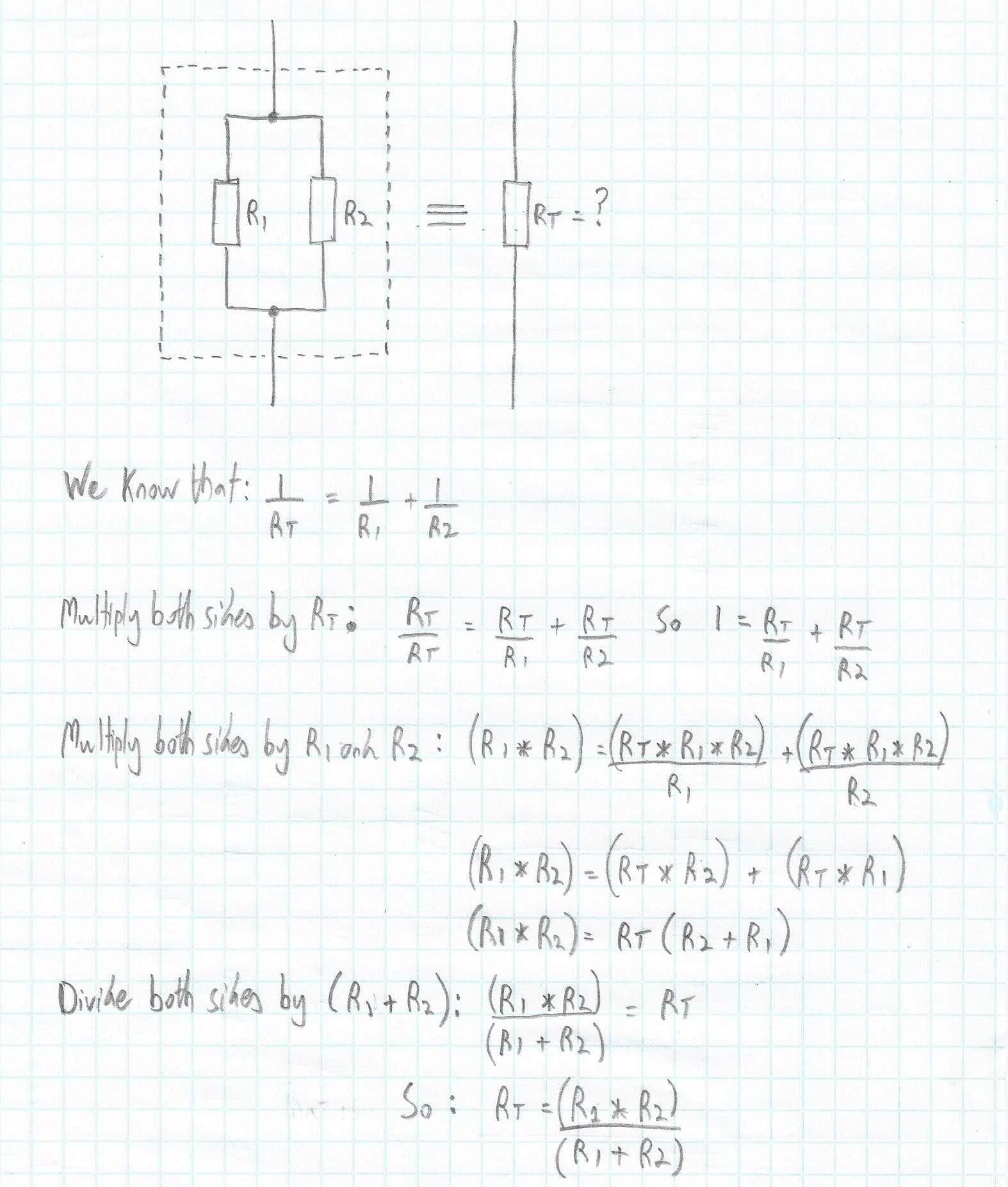 We have something rather special to peruse and ponder in our next column, but I don’t want to spoil the surprise. In the meantime, as always, I welcome your comments, questions, and suggestions (I particularly appreciate comments that tell me how wonderful I am, but I don’t want to influence you in any way).

I have gone through whole series an this is only your efforts and hard work in this series make me create an account on hackaday. ♥️ This series. Waiting for next part.

Hi Manish -- thank you for your kind words -- I'm planning on posting the next part on Tuesday 1 September (so  week from tomorrow). I think you will really like the next part, which will introduce the concepts of 0V, ground, and earth -- I'm really looking forward to creating the drawings and writing it and posting it and hearing what you think.

Can't wait for your next post. :-) Always wanted to learn Electronics however I am a CS guy.

Cool Beans indeed LOL  It was only when I started writing this series that I realized that my lecturers at university had bounced pretty quickly through things, giving us the formulas for things like the voltage divider shown in Part 8 -- Vout = (Vin * R2) / (R1 + R2) -- and the two resistors in parallel -- RT = (R1 * R2) / (R1 + R2) -- without actually explaining how we got there (or maybe they did explain but I was two thick to understand). Be that as it may, I thought some beginners would appreciate a step-by-step approach in which everything builds on what we've done before.

So refreshing to get back to basics. Sometimes I feel like I need a refresher and this series is just the thing. Cool Beans :-D