Finally, after numerous attempts I made this thing speak to me!

But first things first. Currently I'm trying to find the code responsible for scanning and analyzing the keypresses. And I want to do it the easy way (i.e. using the debugger, not by reading /and understanding/ the whole source code). How hard can it be? Harder than I thought.

Let's take a look at the schematics (I have merged two pages and removed some irrelevant connections). 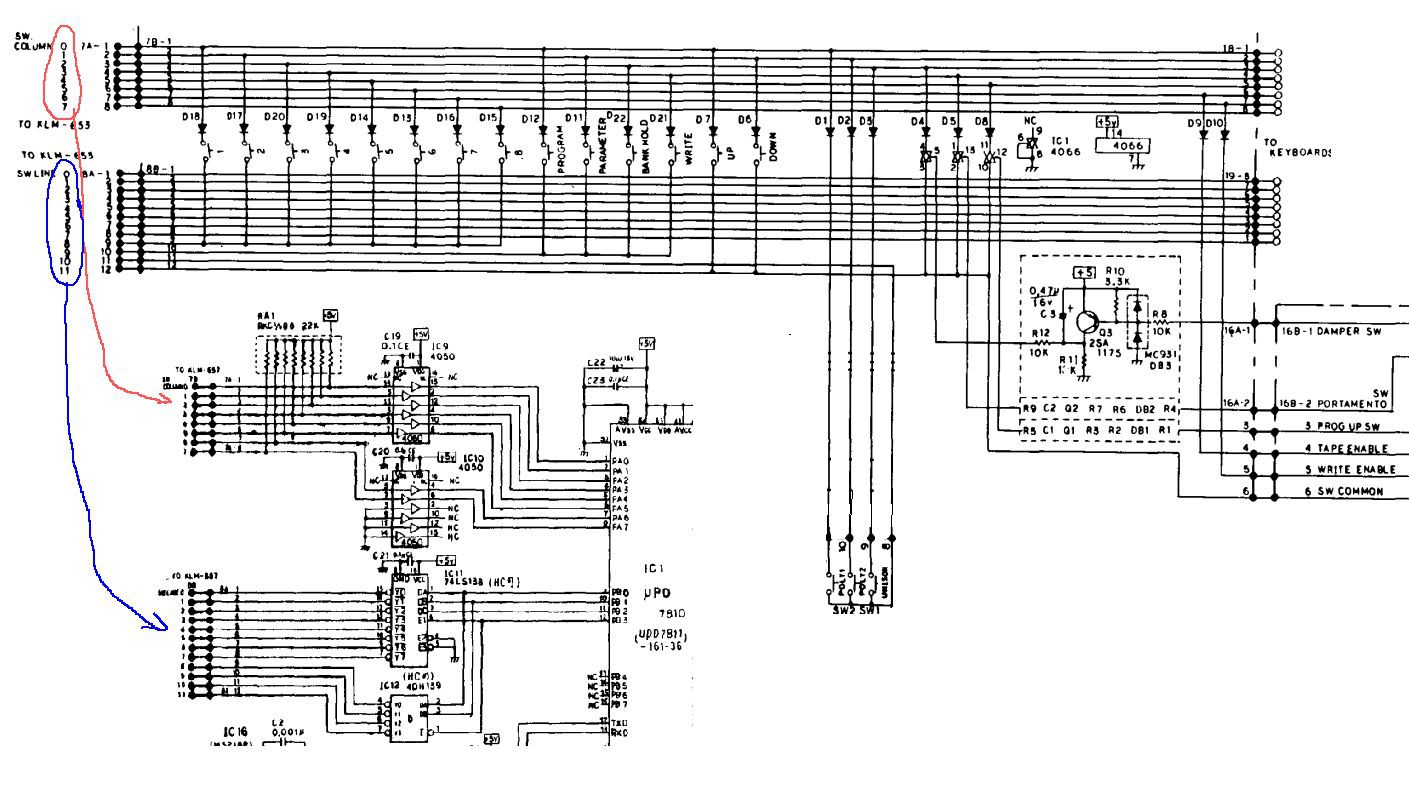 SW columns are connected to PA through non inverting buffers. They are pulled up, so if no switch is pressed, PA should read 0xFF. DW6000 stores switch states in the external RAM ($27E9-$27EC). Ok, so far so good. Now, I thought that if I modify those addresses (e.g. change $27E9 from 0xFF to 0xEF) I should see some changes on the displays (= display memory - $27E1-$27E6 for 6 digits and $21E7 for the LEDs), right? Wrong. Each time I modified that value, it came back to 0xFF after some time with no change on displays whatsoever. I tried to set some watch- and registerpoints in the debugger, but it wasn't useful, cause the debugger was halting code execution too often.

I started to browse the source code looking for the places where PA is being read, but there was still too many gaps (i.e. addresses in RAM that contain something that gets analyzed, etc.). OK, so I need some help. Maybe I could force MAME to emulate those keypresses somehow?

Looking at the sources I found, that there are special handlers for both reading and writing to the memory and ports. I have modified the gmaster_state::gmaster_port_r handler to return a fixed value (0xFE) each time PA is being read and PB is set to 3. That should emulate the up key. The code compiled and as expected I saw one FE among FFs. Nice. Unfortunately that didn't work either. I was confused. After numerous attempts to make this damn thing speak to me I modified the code to return 0x00 (all keys pressed) no matter what. And this time... nothing happened. But at some point I changed one of the stored PA values and after some struggle I saw some values in the display memory saying "TAPE". Great success! OK, now I get it. There must be some sort of debouncing code that samples PA value, holds it, compares, yada yada yada and finally does what it should. I don't want to bore you to death describing my failed attempts to make this thing work, so I just show you what I ended with:

And that made me very happy. Looking at the memory window I finally saw some predictable changes: the value on the 1st display changed to 5- (1st keypress) and then to 55 (and so on).

Now I will try to "program" a sequence of keypresses which should bring me to an unsupported menu value. Wish me luck, I hope I'm getting closer.

Hi, I'm a happy dw6000 owner, I really like your project, but I'm not a technician, I'm only a musician. I'm disturbing you, 'cause my dw6000 has a problem: al data is lost, I'd already changed the battery once, and recharge al the patches via tape interface. It worked perfectly for several days. Then the DW lost the data again, if I turn it on I can hear only a long sweep, as the last time it lost the data,  but now, if I turn the switch in tape ENABLE position, the display goes off and there's no way to recharge the patches. If I turn it off and put the switch to TAPE DISABLE, then turn it on, the display comes on. Sorry if I ask you that, may be you can give me an advice.  You seem to be an expert. Thanks