Episode I: First flight of the Delta Flyer

Last weekend I managed to get the Delta Flyer running. Most of the parts I've sourced came from very inexpensive (relatively) suppliers in China and I didn't pay extra for shipping, meaning shipping has taken a very long time.

I've also been a bit worried that calibrating a Delta would be really brutal and have been kind of dreading the potential pitfalls.

For a first run, I decided to use very cheap rollers (Prime Line shower door rollers as discussed in my previous entry). Once I got the moving parts assembled, I decided NOT to install the hotend and just get er calibrated well enough to operate a Bic Pen. I took some careful measurements, entered them in to my Smoothieware config file and surprisingly things have worked out quite well. Check it out! 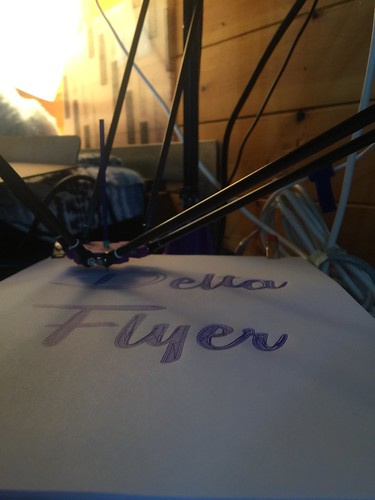 And here's a video rendition. I'll add that I print throught Octoprint (using OctoPi), it's wonderful and Cupcake155 (my first printer) has used it for a long time. I, of course, go through Wifi too.

I've posted various photos up to this point in my Album for Delta Flyer's initial life on Flickr here.

I think it was a great idea to calibrate the motion through a pen before going 3D. Had I skipped that, I probably wouldn't have suffered a lot, but in the event of a measurement error, I think it probably saved me a lot of grief.