You may have noticed in previous logs, I might've gone a bit overboard in using resistors to route signals where, in a logic/gate-sense, the, maybe, more "proper" way to do these things is with e.g. bidirectional-latches (newly-discovered, to me, 74x543) or a one-directional latch (e.g. 74x574/374) and a buffer (e.g. 74x244), both with output-enables.

I'm well-aware of the "more-proper" logic/gate-sense. My first large-scale TTL circuit, an LCD-controller, was based on such logic, self-taught, during summer vacation in highschool... shit was that nearly 20 years ago now? 15, fhwew!

...well, all its timing (pixel-clock, porches, addressing of the SRAM) was handled via 74-series chips. The microcontroller just loaded the SRAM with updated-pixel information, but otherwise sat unused. (Never occured to me, until just now, I could've quite-literally, removed the uC and still held a stable image on-screen, refreshing at 60Hz, much as how #sdramThing4.5 "Logic Analyzer" can have its uC removed and still perform sample/repeat. I'll never forgive stop thanking @frankstripod for convincing me to create that (really long) video showing sT4.5 running while I quite-literally pull the microcontroller from its socket). BUT, the point is, in order to *write* data into that SRAM *while* the SRAM is also being used for refreshing the display, you have to reroute data, in and out, with the right timing...

Anyhow, I'm well-aware of the, maybe, "more-proper" methods of using latches and buffers with output-enables. But, again, doing-so requires quite a bit of logic, as well as quite a few *additional* control-signals.

E.G. say you want to use a buffer for one direction and a latch for the other, you need, at the very least, two output-enable signals. 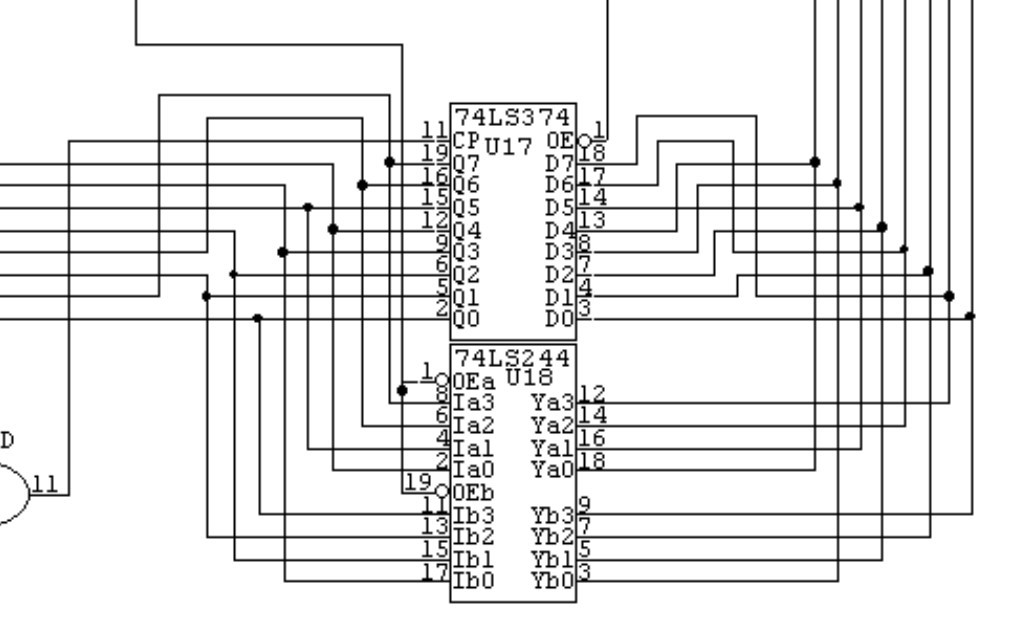 So, if everything's *easy-peasy* you could merely throw an inverter between those output-enables, and call it good. (or maybe call it "direction"). But what when you have that same "bus" connected to *several* such bidirectional "sources" (such as, in this project, the "Side-Kick's" I/O's, which are used for sampling 32-bits of data, then the processor/host can read that data back via an 8-bit bus)...? Now you need an output-enable for each set of 8-bits (4!). and a direction signal, as well.

That's a lot of signals!


I've gone into that specific case in a previous log, so won't repeat it here. But, I'm working on a new thing for this project...

Wouldn't it be nice to have the option to sample 8bits with four-times as many samples...? (Remember, with this system, we can sample 32-bits simultaneously, and throwing another DIMM at the equation could easily bump that up to 96 bits!).

So, I thought I'd look into presettable-shift-registers. The idea being:

Each "byte" of the "Side-Kick" (sample-memory) can be selected with the DQM ("data mask") input... Kinda like an output-enable on a latch.

So, say, the "Free-Runner" loops through the entire memory-space 4 times, instead of once,.. Somehow we need to select which *byte* of sample-memory we want to sample into. So, iterate through those DQM's, one at a time. DQM is active-high, but that means we want to "mask" (in the "normal" sense of *hiding*, rather than the oft-used programmatic sense of *enabling*) all the bytes we *don't* want written...

Well, dagnabbit, that looks a heck of a lot like the doings of a shift-register.


OK, but I ALSO want to have the OPTION to sample 32 bits simultaneously (with 1/4 as many stored-samples)...

There was a time, yahknow, where one could dig out the ol' 74-series reference-manual and most-likely, with enough index-browsing, come up with darn-near exactly the chip needed. Apparently those days are no longer here. There are *a ton* of 74-families, these days, BUT, most of the newer families seem to only actually have *a select few* of the original selection...

So, I came across this page... which is basically describing exactly what I'm looking for... Except... My Usual Supplier doesn't supply the chip mentioned (74x395), especially in the high-speed variety I'd like, for this project.

So, let's step back for a second... That Page shows the "maybe more proper" method of creating such a device (a parallel-load, serial-in, parallel-out shift-register).

Perty slick, really... and if it existed, and was easily-available, it'd be my go-to for this purpose. But... it's apparently not.

So, let's take a step back for a second... What does this thing *really* do...? All those logic gates basically allow for routing the data-flow depending on whether you want to parallel-load the shift-register (basically, with an initial value), or whether you want to shift-in serial-data and have that serial-data output on the pins.

Actually, that circuit, right there, is dang-near exactly the "maybe more proper" circuit for my needs... But I really don't feel like investing in a bunch of AND gates or OR gates, and there's several inverters involved, as well... And @James Newton, you know I don't want to use an FPGA... ;)

Back to the same idea used for whittling 32 parallel bidirectional bits down to 8, using nothing more than latches and resistors...

What we really want is the option to *load* those D-Q latches with an intial-value *in parallel*, like a regular-ol' D-Q latch, like the '574 I've already invested heavily in (or the '374/'373 you can find all over old circuit boards). Then turn the damned thing into a shift-register, such that every-clock-pulse causes whatever was *initially loaded* to *shift* one bit to the right. The drawing shows a buffer at the bottom, but it could just as easily be a latch, as long as it has an /OE input, just like the ol' trusty '574...

Switch that /OE High when shifting... and... we've dun reduced Two ANDs, An Inverter, and An OR to nothing more than A Resistor. (PER BIT... For the four-bits necessary here, we've reduced 20 16 (MATH-FAIL) gates down to 4 resistors!)

I propose, at this moment, as something I hadn't pondered before, that there might in fact come a point where, plausibly, 5 gates might in fact take more power than the necessary resistor, even if that resistor does nothing but create heat.

I propose, further, that the number of gates/latches necessary for all those extra control-signals (and the software to control them) might, as well, add to the power-factor which might, at some point, plausibly rare, be offset by little more than a single resistor.

Anyways, in the interest of designing this circuit... It means that I can use my trusty (and largely-invested-in) '574s and resistor-networks for this entirely new purpose, as well. Wee!

So, I hereby dub this: Resistor-Latch-Logic, or maybe Latch-Resistor-Logic. And, maybe, won't even bother investing in buffers. (Consider this my copyright, my patent-pending).

But I'll definitely be investing in more beer before closing-time.

Sometimes we fail... Thoughts on Pretrigger-buffering

Pondering 16-bits at 2x the number of samples... Originally thought of whether I needed to shift everything twice... but, instead, what about initializing the shift-registers with 0b1010, then allowing it to shift once to 0b0101. Dun!