We came up with the idea for this simple mod because we were unhappy with the User Interface (UI) LCD and control buttons being on the bottom part of the printer.

If you used the printer on a low table or shelf, then you would need to stoop or crouch down to see the screen or operate the controls. Moving the UI panel to the upper part of the printer made it easier to see the display and reach the controls. Here is how we did this mod: 1) Before taking the printer apart, you must print out a copy of the protective cover I designed for the UI. You can find the cover on my Thingiverse page. Here is the link to the object file.

It will just barely fit on the bed of the MP Mini Delta, so if you have trouble printing it, you may have to delete any skirt or brim settings or anything that prints outside the perimeter of the part, like supports, priming towers, etc. This print has critical dimensions, so you must calibrate your printer or scale the part to accurate size or else it may not fit in the mounting holes properly.

2) Remove the 6 screws holding the top sheet metal cover to the printer, then remove and set aside the cover.

3) Removed the 6 screws holding the bottom sheet metal cover to the printer and set the bottom cover aside.

4) Remove the two screws on the top of the UI panel in front of the build plate, and pull the entire UI panel assembly straight out towards the front of the printer.

5) Disconnect the 4-conductor UI cable from the circuit board on the back of the UI panel, and set the UI panel aside.

6) Remove 4 screws from each of the two lower front plastic tower end caps, then gently pry the two tower end caps up out of the tower extrusions. You don't need to remove them completely, just lift them enough to twist them and expose the panel bracket channels in the extruded aluminum towers.

7) Remove the two screws holding the exposed panel brackets into the channel on each tower. These screws also hold the motor mount brackets to the towers.

9) Remove the two screws holding each panel bracket in their channels at the top of the printer behind the panel with the Monoprice Logo printed on it. These screws are hard to reach, but angling the screwdriver a little can help.

10) Remove the 4 screws from each of the front two upper tower end caps, and the center belt tensioning screw holding the belt pulley to the tower end cap. Hold the pulley and belt from below so they don't drop inside the printer. Be careful not to let the belt and pulley flop around because they may jump the belt out of the motor pulley or out of the moving carriage, and this will add more work putting them back where they belong.

11) Pry the two front tower end caps up and move them aside enough to slide the Monoprice logo panel and the attached panel brackets out of the top of the channels.

12) Remove the two screws holding the panel brackets to the bottom of the Monoprice logo panel, and set them aside.

13) Slide the Monoprice logo panel into the channels at the bottom front of the printer.

15) Push the bottom tower end caps back into the towers and put the 4 screws back in each end cap.

16) Install the two screws in the top of the Monoprice logo panel.

17) Slide the two UI panel brackets into the channels at the top of the towers.

18) Secure the UI panel brackets to the towers using two screws in each side.

19) Press the tower end caps back into the tops of the towers, and screw them in with 4 screws each. Then install the belt pulleys and loosely tighten the belt tensioning screws the hold them in place. 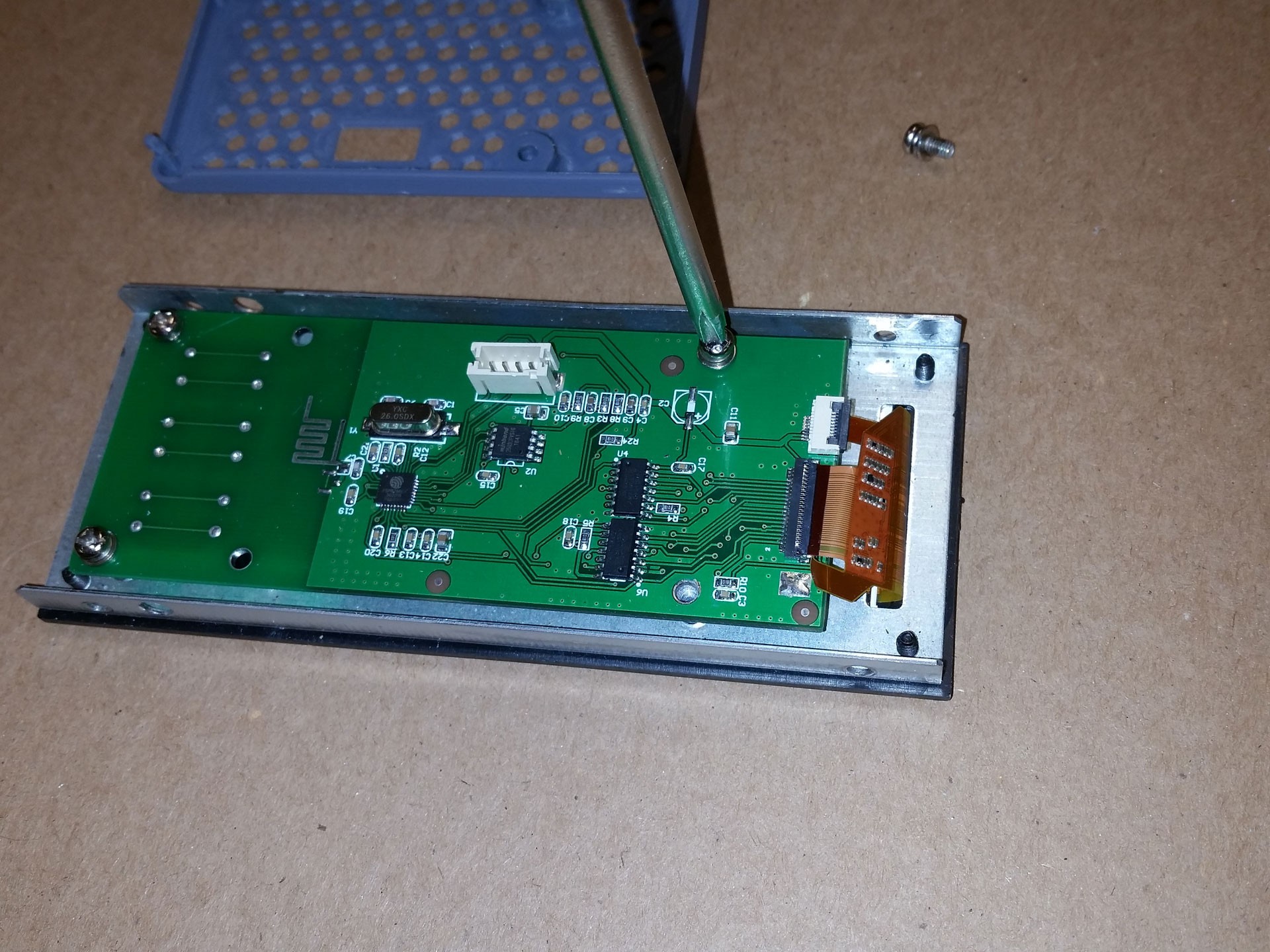 20) Remove the two screws from the UI Circuit Board on the side near the LCD cable connectors.

Insert the UI Protective Cover that you printed out in the first step of this tutorial over the back of the UI Circuit Board, and put the two screws back, through the holes provided. 20) The existing 4-conductor UI cable must be lengthened to about 400mm in length. For my printer I was able to make a completely new cable by crimping 2mm JST contacts onto a length of stepper motor 4 conductor wire, but it may be easier to simply cut and splice in a longer section of wire or individual wires into the existing cable.

21) Feed the newly lengthened UI cable through the tracks in the interior of one of the towers and plug the connectors into the UI and motion controller boards.

22) Replace the top and bottom covers on the printer and screw each in place with six screws. Make sure to check and adjust the belt tension screws so the belts are at the proper tension.

23) Power up the printer and enjoy the results of your hard work! You're done!