Reducing the complex nature of more mature automation and IoT frameworks by way of limiting components and scope.

As is a common theme with many projects that I have undertaken, I was looking for a solution to a mundane problem and found the "existing" solutions to be far from ideal. The solutions available to me were too complex, took too many resources, and from my perspective took on a "Rube Goldberg" look and feel.

The problem I am attempting to solve is a simple problem and one that is not uncommon. I have a garage door and a driveway gate. I tend to leave them open on occasion. If I want to check to see if I left them open, I have to physically go out there and look.

This project documents the development of my own personal and lightweight IoT and automation implementation. Certain details are certain to be left out to protect the security of my household.

I needed a way to monitor the status of my driveway gate and my garage door. There are many reasons for this:

I investigated some open source/freeware home automation solutions. They all had several things in common that conflicted with my need to get out of the dog house on the car situation:

Enough! I was drowning in obscure Linux packages, a billion jar files, and thousands of pages of documentation. Not to mention my poor PogoPlug server has been brought to its knees multiple times with all the experimenting. I need something much more lightweight than this: 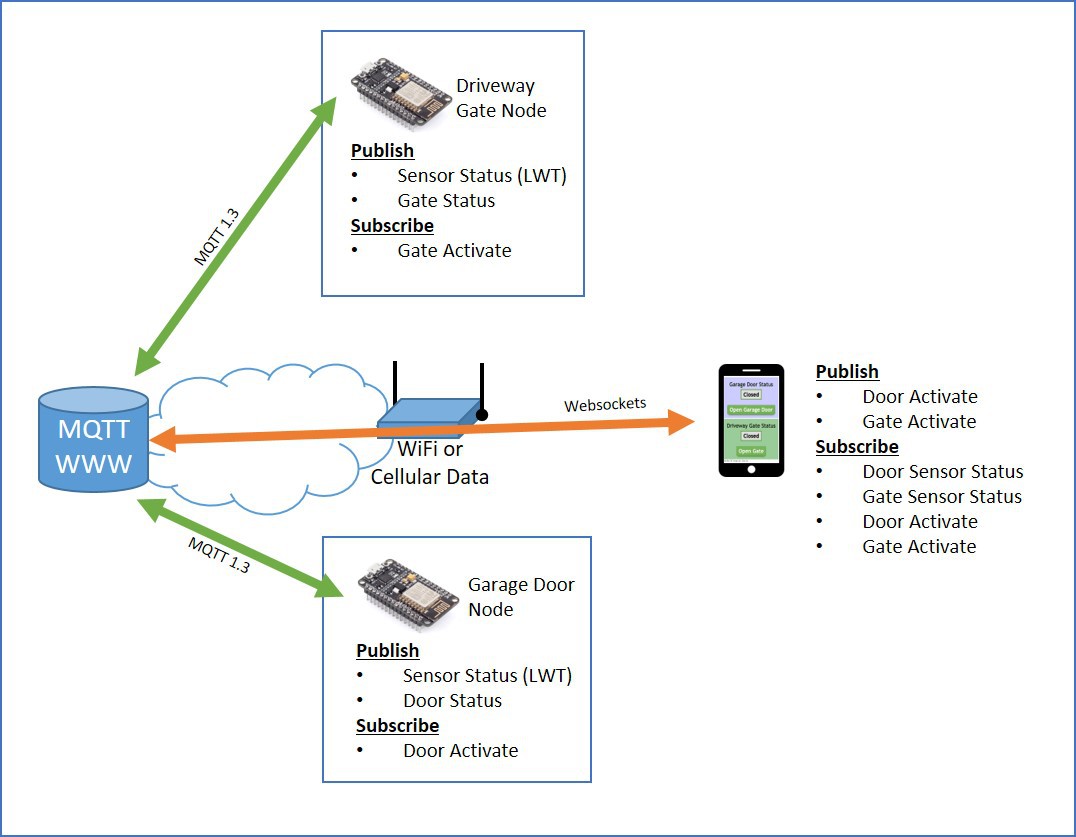 Great Project.  Do you mind sharing more information on the programming for the esp8266?

I enjoyed your project! I'm sure I'll be using pieces of this (with attribution, of course) for my own garage door opener sometime down the line. I have a couple other projects in the queue ahead.

I don't know how this will work in your situation, but when I do my build I'm going to experiment with an esp8266 that is attached to the car. I have a 12v port in the trunk that is unused, so it'd be easy to convert your typical cell phone charger into a power supply for something like the nodeMCU you're using. When the car starts, the esp8266 boots and connects to the network. It spams "I'm here!" to an mqtt broker which listens and tells the garage door to open. In short, car starts, esp8266 gets power, garage door opens.

Once the esp8266 exits wifi range, the "I'm here!" message stops. After a timeout, the mqtt broker will tell the garage door to close.

This handles the majority of my inconveniences:

3) If I am carrying my children or am otherwise unable to open the garage door when I enter, it'll open when I start the car.

Obviously there are some variables I can't measure until I actually do it. As best as I can tell, it takes about 5 seconds for the esp8266 to connect to a network after power is provided. If the wifi range is not great enough, I might have to add an antenna or something to ensure that the door is open by the time I get to the garage.

Because of your cell/wifi hopping issues, I'm guessing you don't have wifi at your gate, so this may not be an option for you. You may be able to use an hc-12, which is a serial to 433 mhz radio adapter, to do something similar. Because the hc-12 has extensive power/range options, and works up to 1.8 km in the open air, you could set up a similar system, and 'proximity detection' would be managed by decreasing the power / range of the broadcasting unit. You could have one hc-12 in your house paired to an esp8266 that talks to your mqtt broker, then another in your car that is constantly broadcasting a code when powered, and when the hc-12 at the house hears the code it tells the esp8266 to tell the mqtt broker to tell the gate and garage door to open.

The hc-12 can be powered by 3.3 or 5v (I can't remember the actual tolerances, just that it works with esp8266 and arduino hardware), and I'm currently building a well tank level sensor that sends data to an esp8266 and repeats it up to the local network. Unfortunately I haven't gotten far enough to send any useful info on that, but I'll write up my project when it's done and send you a link if you're interested.

Hey, thanks for following my project Ben!  I had considered "proximity" triggers, but at the end of the day I just couldn't guarantee that my ladies wouldn't just get it all fouled up.  OMG, they are so judgemental.  The second something doesn't work, it's worthless.  I needed a sure thing, so I decided it would be easier to "train" them to use a positive on/off button style interaction.  Having said that, I am definitely interested in how others skin that cat.  Keep me in the loop (or let me know if you post your project to Hackaday.io).  I want it to work like you describe...

Also, I have made some significant additions to this project, mostly involving the new Amazon Echo I got for Christmas a few months ago.  I plan on documenting that stuff pretty soon.  As a teaser, I finally broke down and had to supplement my MQTT broker with Node-Red.  It turns out that was a great decision.  The downside, it turns out my ladies are uncomfortable talking to a hockey puck.  Oh well...this part of the project is for me.  :-)