I've spent my seed money on a second hand Tasco telescope with an equatorial mount. It needed a little TLC and still needs a proper collimation, but I've managed to get a good image of a rooftop. I've not been able to give it a try as there's not been any clear nights. It's not a motorised mount, only hand adjusted, so I need to retrofit motors to it. The right ascension axis has full 360' adjustment and a fixing close by that will allow me to mount a motor and couple it to the manual adjustment. The declination axis only adjusts in a small range, intended for correction of the alignment and not GOTO operations. I'm going to start by controlling the right ascension axis to give me the ability to track an object with the intent to add the second axis at a later date as the control loops in software should duplicate easily. To control these motors I've bought a L298N breakout, a 2A dual motor driver. This should be strong enough to drive both axis as they should not require a great deal of torque if the telescope is well balanced on the mount.

Since the Raspberry Pi foundation has released a version 2 of the Pi's camera, increasing the resolution to 8M pixels, it was an obvious upgrade to get for this project. In order to mount the PiCam to the telescope I had to design my own adapter as the existing one's that are available did not fit the new telescopes eyepiece. I have it mounted, but would like to alter the design to include some adjustment in the position of the camera.

I've also tweaked the design of the 3D printed parts used to mount the battery and the sensors. I've taken a modular approach, with a common base for each part that is the only part specific to the telescope, to reduce the design required to add to a telescope with a different diameter.

I have also purchased a LSM303DLHC triple axis accelerometer and magnetometer. I wanted to use this as the axis of each device will be aligned to the same axis of the other device. This will be quite important as I need to add roll compensation to the compass reading for the equatorial mount as well as the pitch compensation that is already used in the horizontal mount. I have written a library for the LSM303DLHC and I'm in the process of testing it.

To tie everything together I've have been working on an install script, this is still a work in progress to get everything working right. My aim with this is to have the only thing required to install the software is to get the git and run the script. 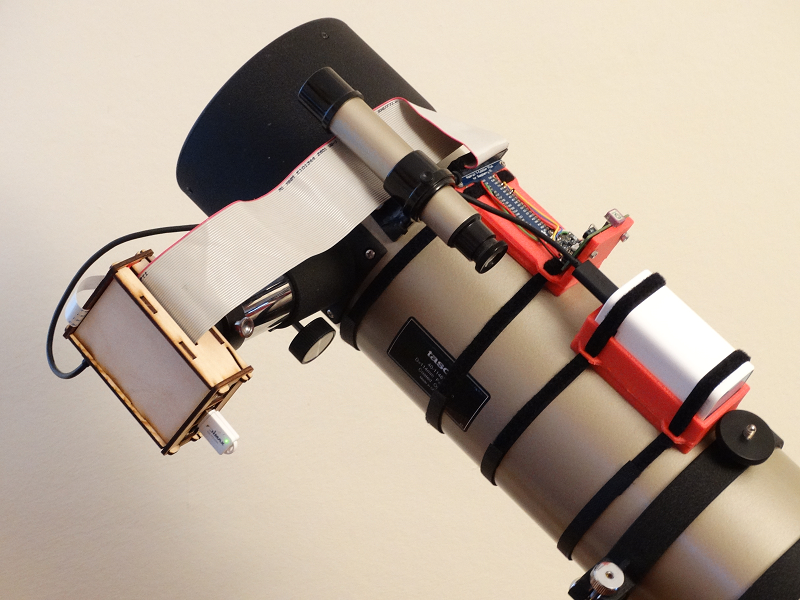