I've made some progress, but I've been trying bits in different areas so not much changed overall. The splitting up of the system is coming along, some design down, still more detail to be added. I had been using an mbed board until I managed to get hold of an ESP32 back in November. This is cheaper than the mbed board and has wifi on board. I have the GPS and sensor running and I was working on setting up the sockets when the Raspberry Pi Zero W was released. I'm currently undecided which to use as the ESP32 is the better option, I would need something else to run the magnetic model as It needs data to be updated every 5 years, so I need some way of updating this. I have already split the model from the main app, with a socket to interface to, with the intention of running it on another machine. I think I'll keep it that way even if I do keep up the Pi build as it could have uses in other projects.

I've also been setting up an arduino with Onstep. I've been looking at configuring it to run on a ramps board, which I think is viable and this has the option of using an ESP8266 to support wifi. It also has an ASCOM driver to give it an interface to existing Windows software. I have decided to create one for StarPi and also look into a linux equivalent. Onstep uses stepper motors, so I've changed the motor mounted to the telescope to a stepper motor. The mount broke as it wasn't strong enough for the heavier motor. Fortunately one of the local makers is adding a CNC system to a mill at our Makerspace so I'm planning on machining a stronger part as soon as I can. This may also allow me to build a mount to motorise the other axis.

On the astrophotography side of things, I've been struggling to get the Raspberry pi camera to focus on any objects other than the moon. I have tried a pi cam V1 and a Pi cam noir V2 with the lenses removed and have added the 7" Pi touchscreen to view and control the camera while I try to focus. I'd like to make an interface using Python and Kivvy to do the camera control. So far I've modified some basic scripts to control the camera, so I can try different exposures, and to control the backlight. There's a few things I want to try when the dark nights return, including using lower resolutions to get more light into each pixel and only displaying a cropped image to prevent loss from resizing. One of the photos I have of the moon is below, slightly altered as the original suffered from pinking: 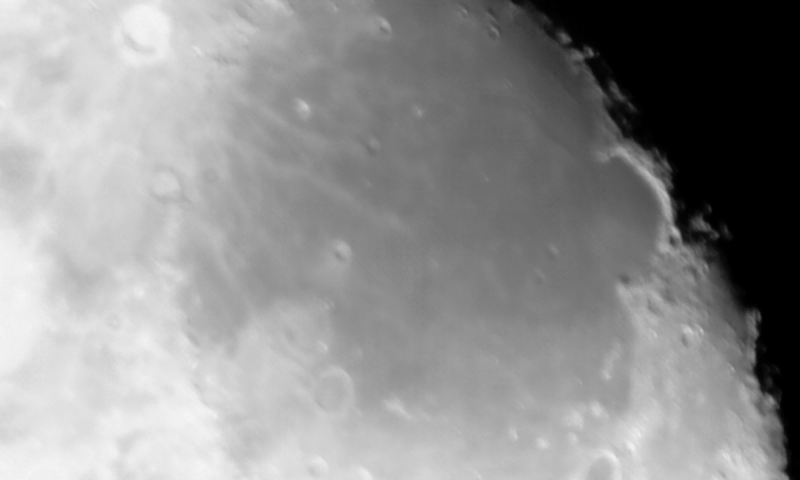 During April, I had a stall for StarPi at the UK Makerfaire in Newcastle-Upon-Tyne. There was quite a bit of interest, generally from amateur astronomers. I also met a willing guinea pig to try out setting up their own StarPi and I met an Irish maker called Rob. His project was a similar take on using sensors to work out where in the sky you are pointing. Again he was interfacing with Stellarium, but this time his pointing device was an umbrella! At the Makerfaire I found I have a bug with my calculations somewhere as Stellarium was showing the wrong hemisphere. Rob showed me the SOFA library. This is set of calculation algorithms for astronomy. I'm planning on using these to either debug my calculations or replace them. 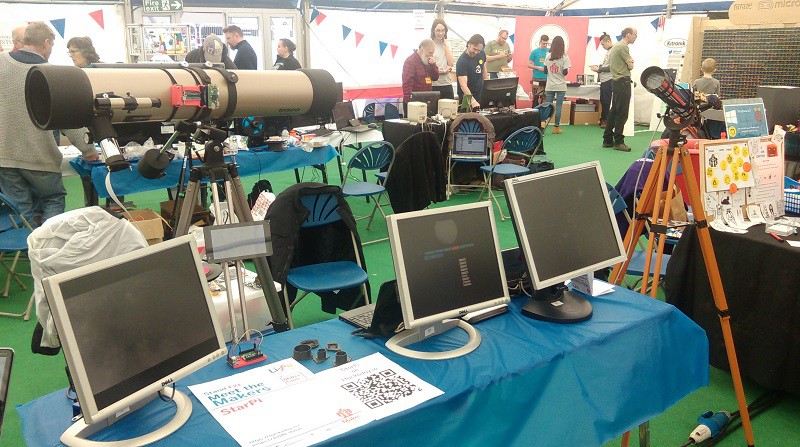