This is my Sistine Chapel, not because it's beautiful but because the time it has taken and it's paintable.

The obstacles of progress are wide and tall but are fun to smash into and break.

The challenge isn't really a challenge unless you think the marine fighting the giant fire monster in the old commercials was just a challenge.

Wow, where to begin? I will start with the good news and move on to the unknown.

Anode is prepared by reacting LiOH with SiO2 in water at 90 degrees Celsius. Then ball milled with Carbon Black and Graphene Oxide.

The next step is to add silver coated copper, to bring the resistance down to 2 ohms, this actually only requires around 2% by weight addition and is much lighter than using a hefty copper foil.

Along with the copper flake I add the electrolyte which is totally counter to everyway batteries are currently made but makes 100% more sense. If the electrolyte (anolyte in this case) is mixed in it has perfect contact with the electrode and no waste of mass or space occurs. The second reason for adding the solid gel electrolyte to the anode is that it can act as the binder material saving even more mass and volume.

PVDF, PVP, Lithium Perchlorate, and Lithium Nitrate make up the anolyte, which can be thinned with THF.

This is all done and bottled in a vacuum or blanketed with noble gas, and can be thinned to spray, pad print, screen print, roll, 3d print with drop casting, you name it.

The main problem with Lithium Sulfur batteries is that the polysulfides of lithium have a tendency to migrate to the anode instead of reducing upon charging. This must be remedied so I utilize a anolyte that has low solubilty for polysulfides and more importantly create a small Gandalf that will allow lithium alone to pass. This works exceptionally well as not only do GO and DE stop poly sulfides they also enhance the conductivity of the solid gel polymer electrolyte. The electrolyte itself consists of PVA/PEG lithium perchlorate, and lithium nitrate, The PVA/PEG are very hyrophillic and are impossible to dry, however the water present does not react adversely with lithium ions but will completely stop lithium poly-sulfides in their tracks. Keeping the anode free of sulfur and the cycle life of the battery high.

This is the area I am moving into now, another million combinations. Sulfur is highly soluble in DMSO at elevated temperature and sparingly soluble at room temp. This will be exploited to recrystallize the sulfur depositing it into the mesopores of activated carbon. Sulfur is entirely non-conductive like the silica so it needs lots of help. To assist carbon black and graphene oxide will be added. The GO will be slightly reduced leaving plenty of active sites for more lithium reactions. I may plasma etch and functionalize all the carbons in the cathode as well in order to increase lithium reactivity as sulfur can react with only half the lithium ions as silica.

When all this is prepared nickel flake and silver nanoparticles will be added to the mix, the nickle and silver make the sulfur reduction more favorable and can increase the voltage potential of the cell. Along with DMSO the cathode potential can be lowered even further hopefully eeking out 2.6 or 2.7 volts in the full cell configuration with the silica anode.

Lastly a solid polymer gel electrolyte consisting of PVDF, PVP, DMSO, Ca+Polysulfide and lithium nitrate will be added, the cathode can be thinned for painting with THF.

The concentrations of the cathode materials are unbeknownst to me but I have an idea I need to start with 80% sulfur. This leads to huge conductivity problems, however with the nickel flake and silver I am confident I can match the 2 ohms per cm resistance of the anode.

The application and building cells

The first cells will be constructed with simple stencils and airbrushing. Ultimately these materials will be loaded into a machine that will print either flat batteries or round cells. That is a different project altogether. 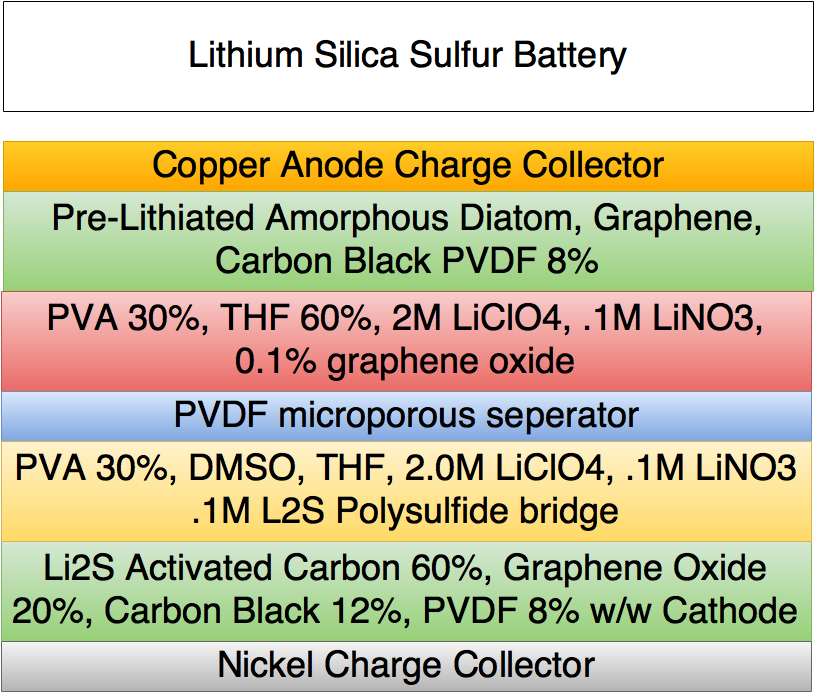