Human-elephant conflict (HEC) is a major cause of death and injury for both elephants and humans. Primary sources of conflict: elephants raiding human crops, unexpected encounters between humans and elephants as elephants traverse their established trails, elephants crossing railway lines. One way to prevent HEC is to automatically detect elephants & alert villagers, or train-drivers, to their presence via SMS, cloud-based apps, or LED signs.

How can we solve the challenge of detecting elephants in order to provide local people with advance warning of their presence? Advance warning being particularly useful in that it can: a.) prevent people stumbling upon elephants unaware and spooking them b.) allow interception of crop-raiding elephants before they reach the crops (this is thought to be safest and easiest time to deter them). Early detection of elephants will mitigate human-elephant conflict, thus preventing death and injuries of both elephants and humans.

This short video from http://www.wcs.org shows elephants launching their crop-raiding mission during the night,and the local people trying to scare them away.

In this solution, small weatherproof cases containing required elephant-detection system (elephant detection device) hardware will be tree- or pole-mounted in locations previously identified as being known to be passed by elephants. These locations could be a) interfaces between forests and farmland b) elephant pathways (these are the established trails that elephants use to move between, for example, forest and watering areas c) frequent railway-line crossings.

It's imperative that the elephant-detection device is of very low-cost (<£100), as multiple devices will be required, and the budget of villagers affected might not be very high. The purpose of an elephant-detection system being open-source, is so that villagers can access plans, download software, purchase components, and assemble the system themselves; placing detection devices where they expect elephants! 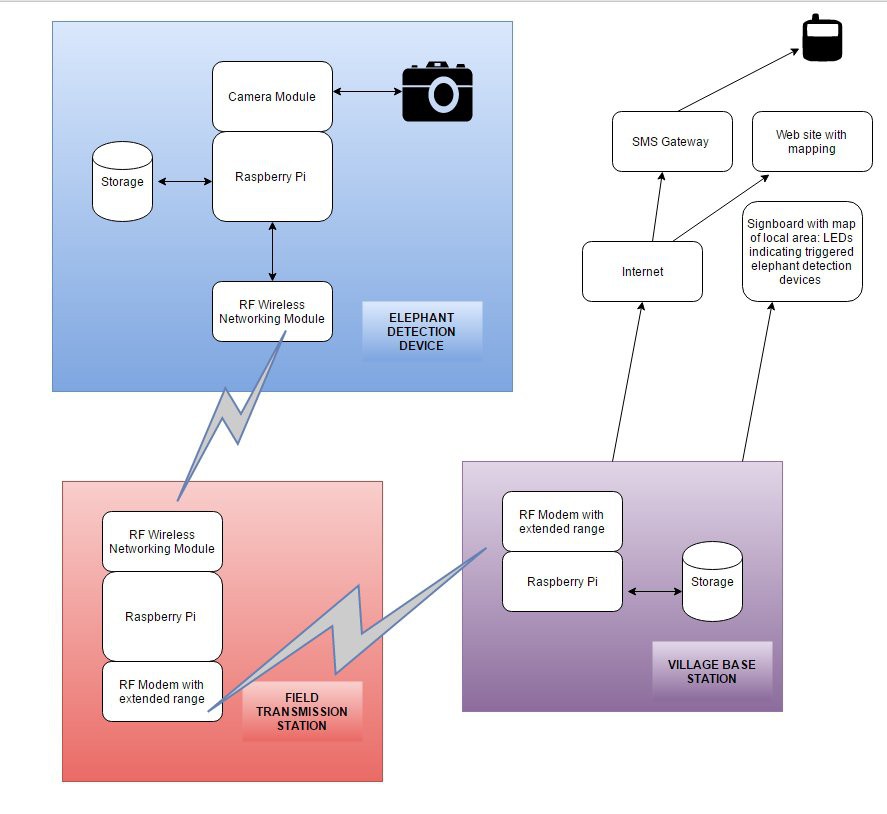 How do we detect an elephant from the images that the camera obtains?

The most challenging part of the project is comparison of taken images of suspected elephants with known images of elephants! This would be quite easy if using MatLab, but this is not open-source and it's very expensive! Instead, I'm using OpenCV in Python to either compare histograms (the fastest and least intensive re processing & resources) or to feature match (slower and more resource intensive). This processing will be accomplished using the Raspberry Pi's on each elephant detection device, and the detection results will be transmitted via RF to the field transmission stations, and then onwards to the village base station.

This is an example overview of software and hardware activity on the elephant detection device, and the outcomes that positive and negative results of elephant detection would trigger. In this example, the histogram comparison method was employed: 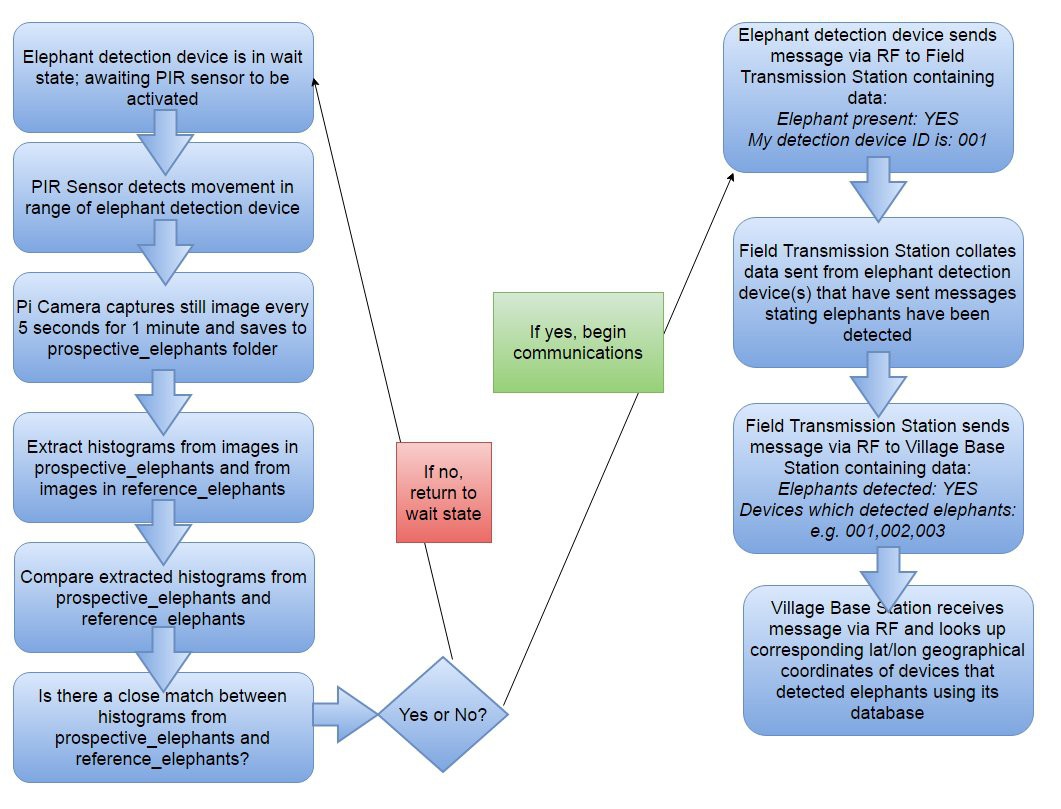 As an example, I have used Sansiajang, Odisha, India. This village was identified in 'Human-Elephant Conflict: Case Study from Balasore and Rairangpur division of Mayurbhanj Elephant Reserve, Odisha, India' as being afflicted by human-elephant conflict.

As can be seen from the map, Sansiajang is surrounded by agricultural land, and has a large forest to the north, which is where elephants may wait before launching their crop-raiding missions. The elephant detection devices of the detection system would be placed at this interface between the forest and the agricultural land. The detection devices would be mounted at approx 1.5m above ground-level,... Read more »
View all details

Hii neil, your project is very good. As we are thinking to use the same concept to detect tigers in india. we need your help to implement this idea so can you please explain us about how we can design circuit diagram?. if you have any suggestion regarding this idea then you are most welcome!

Hi Neil, Your project is really good. I am trying to implement something similar to your project,in my case i'm from India and there are hundreds of elephants dying every year in accidents that happen due to trains passing through forests, can i implemet something like your project but all i need is to detect elephants and inform them to the near by train station or trains so that they could be warned to travel in a way slower speed ?.Will this be possible in a way cheaper price with just using motion sensors alone,if so can u please explain me about this and how about using dual infrared sensors parallel to train tracks?

hi, ah I figure yes you could just have IR beam break circuit to do it,  parallel to train tracks in regions that elephants are known to cross. You could mount them on poles above human and other animal height so only elephants break the beam. Then use a modem like Huawei E303 to just SMS the train drivers to slow down. Yeah, it'd be way cheaper than using PIR in this context - since you just make a 'fence' of IR beams alongside the tracks. I've not seen anything greater than a 10m IR beam break circuit so I don't know how many multiple circuits you would need to make. Here's one somebody made for camera traps anyway http://andybrown.me.uk/2011/07/09/building-the-phototrap-part-5-the-long-range-infra-red-beam-sensor/

I imagine you could do a similar break circuit with a LASER too, that would have a much greater range than 10m! I don't know much abt costing but will look into it as it might be useful trigger for elephant detection devices vs. PIR.

Hey Neil, I really like this. You know, I'm working on something similar, but not for elephants.

So I think your PIR sensor won't do much good because the cheaper ones have a 7 metre max. range. I've seen ones w/35 metre range but the price is aprox 60 USD. The camera will be able to see much farther. I also don't know the temperature over there, but I've run them in humid jungle temps and at anything above 35 or so they're unreliable.

In my experience w/opencv in RPi2b, it's extremely resource intensive and requires a lot of battery. I was using the C api so can't speak for python, but I was doing blob detection based on color & size using video. In short, it works, but it's a very expensive operation. Best to have power coming from a wall. I see you are using histograms based on images, which I'm not familiar with but sounds much more resource friendly than video operations.

Also, w/that small battery how do you expect to get more than a few hours out of that?

I think ideally you can use a gsm modem such a huawei e303 or similar zte model, both of which should have low power modes & are quite cheap. If you're interested I can also donate some C code I wrote that provide remote administration via SMS in a very resource friendly way, on a beaglebone green it idles @ .1 % cpu usage so on a Rpi3 it should be a good bit less.

Be sure to keep the updates coming, I am very interested to see how it performs in the wild. Thanks!

Ah, now I had not thought of that regarding the range of the PIR sensor! Thanks for bringing it up..  I'll have a look and see if I can find some lower cost long-range ones..

Glad to hear it works using the Raspberry Pi! Yes, I was worried it will be dreadfully resource intensive - I just hope the histogram method  will be accurate enough but I don't know..

Yeah, I'll have to move to a bigger battery for sure - that one is only for my prototype really. Thanks that would be great abt the code - I'll get back to regarding it when I progress to that stage :-) Thanks for tip re modem too; e303 is much cheaper than the one I found so far..

For sure I think there will be lots of ahem, 'interesting' problems when I test it in the wild !!

Awesome project! Are you planning to integrate flashing lights and/or audio in order to scare away the elephants before they reach the crops?

Thank you! :-) Yes, actually I was considering that! I was thinking of adding audio towers which would play random (so elephants didn't get used to them) sounds of tigers or bees..

Following a different approach using micorphones for detecting elephants, you might be interested in the research of Zeppelzauer et al.

thanks! I had heard of that technique, but haven't seen the paper you linked..

Classifying everything using your RPi Camera