Designing a Pcb for the Line sensor Array I

A line follower robot mounting a NUCLEO-F401RE/Raspberry PI to implement the Control System.

On this log I will go through the process to design a printed circuit board (Pcb) containing the Line sensor array circuit. It sounds pretty good, but do not worry too much about the cool name, at the beginning of my second year I did not know what it was ,or what it was used for.

A line sensor Array is simply a circuit which contains a number of photo-transistors sensors, which will be used to detect where the white line we intend to follow is. The photo-transistor sensor has two main components, a transmitter and a receiver, the transmitter is a LED (light emitting diode which emits infra-red light, and the receiver is a photo-transistor that it varies the resistance across the collector and emitter terminals as more light is reflected back into the base of the photo-transistor. We can use this principle to find out how close the sensor gets to the white surface or black, giving us a nice analogue reading going from almost 0 V when the sensor is on a black surface to almost Vcc volts when the sensor is on a white surface.

For the photo-transistor sensor to work correctly, it needs certain current going through the emitter, and also the receiver, this values can be looked on the datasheet. For my circuit I have chosen the sensor TCRT-500 for a number of reasons, perhaps the 2 more important ones are: the emitter and receiver comes already built in a package and secondly it comes with a daylight filter that blocks the day light being reflected on the white surface, making the sensor more robust to disturbances.

To find out more about this sensor and the current needed to make it work properly, you can have a look at the datasheet, TCRT5000 Datasheet for this project I have chosen resistors of 10 kilo ohms for the receiver branch and 100 ohms for the emitter branch, they should work quite nicely and give us good readings. I will also be using a high current Darlington-transistor buffer from Texas instruments Buffer, Datasheet. The reason for which I am using the buffer is mainly because I want to control when and which sensor is on (main reason being to save energy) to accomplish this the obvious first choice is to use a micro-controller and connect the sensor to one of the I/O pins of the micro, however this option is not really feasible since there is a limit as to how much current each pin of the micro-controller can outsource, for this reason I need to use the buffer on the circuit. since the buffer function is to provide a path to ground removing the need for the micro to outsource big currents. I try to make it easier to see how it works using my poor drawings skills! 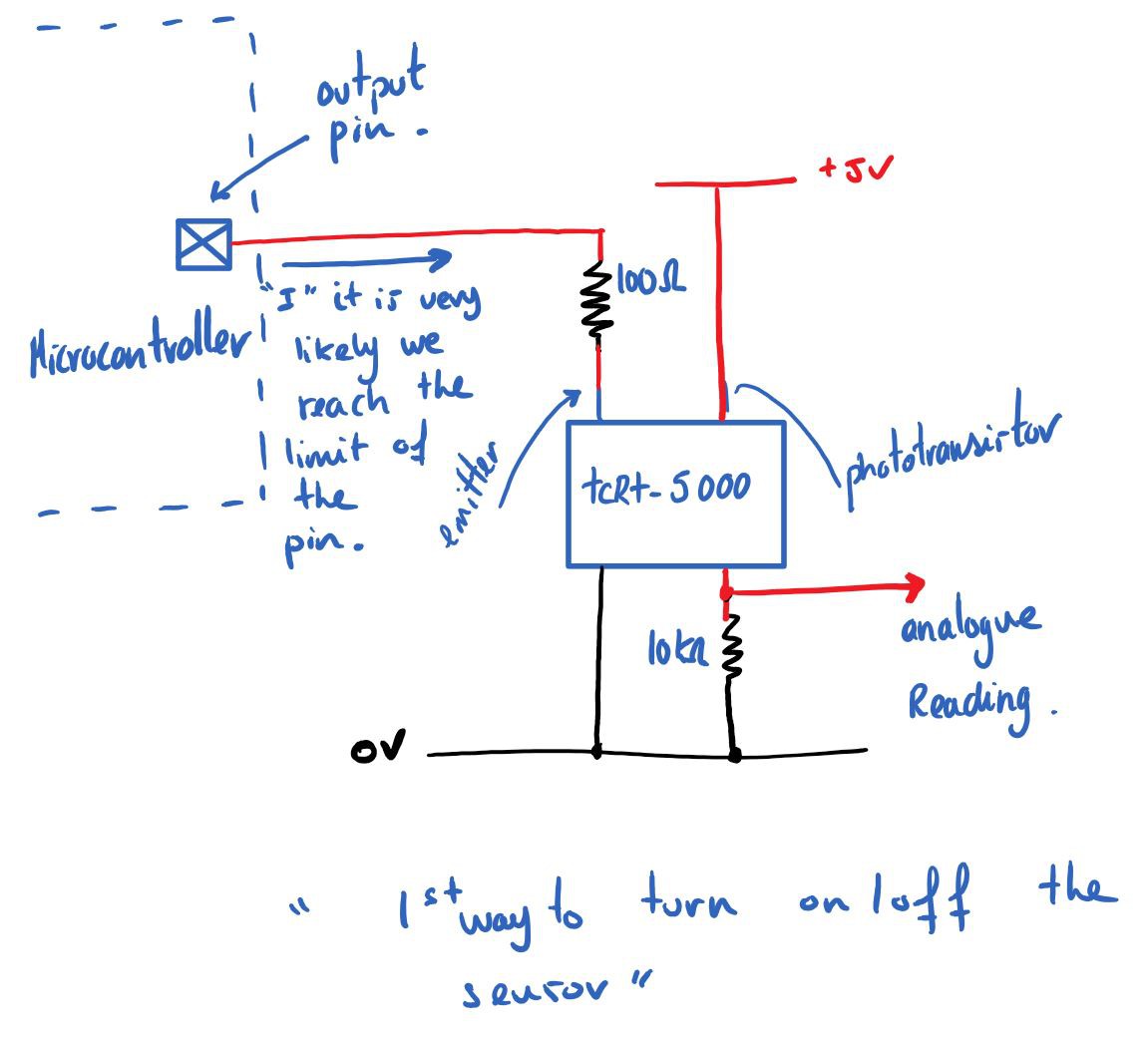 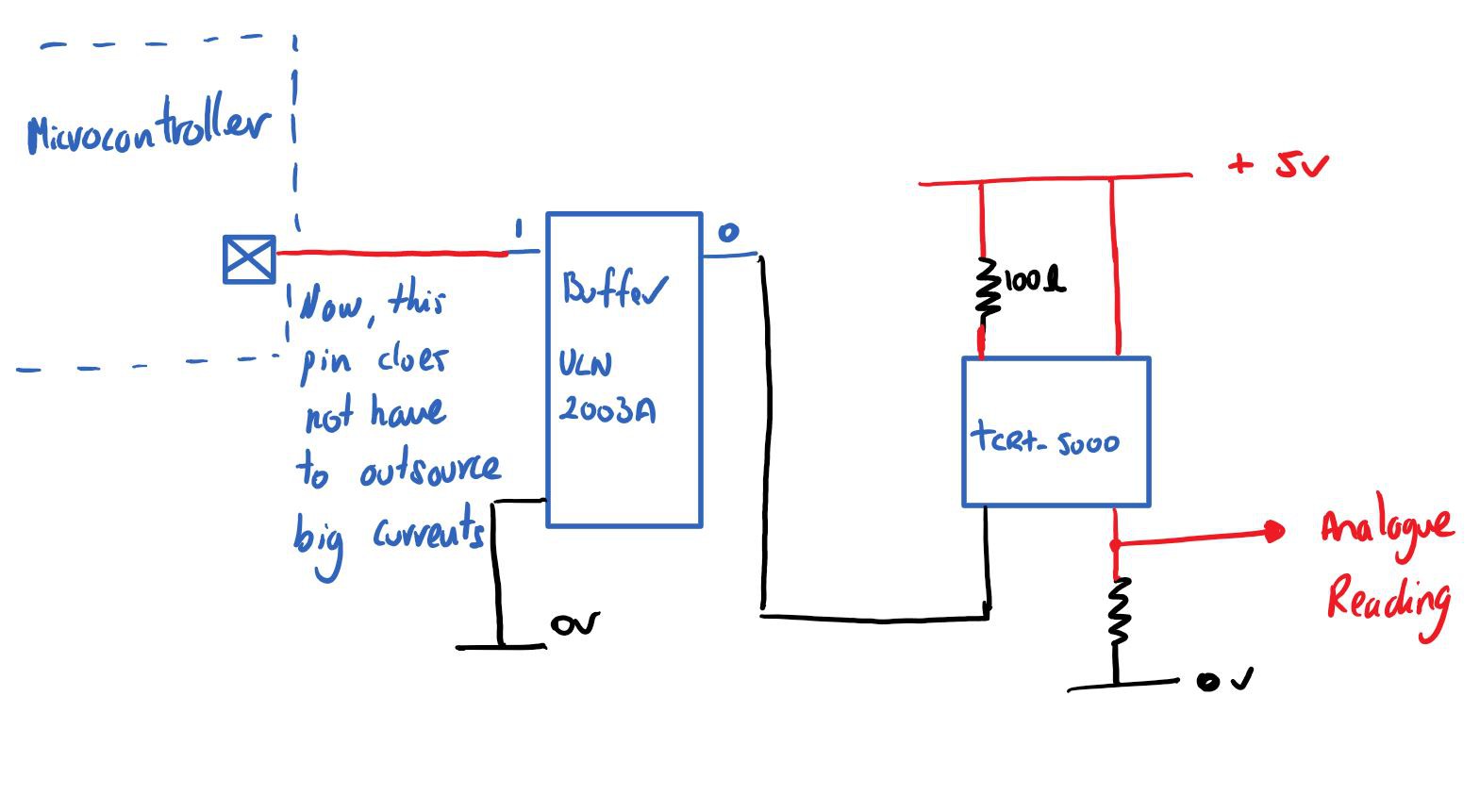 Before moving into how I designed the PCB I built it first on MyDAQ (NI myDAQ is a low-cost data acquisition (DAQ) device that gives students the ability to measure and analyze live signals anywhere, anytime, provided by National Instruments) to check its correct behaviour. As seen in the picture the sensor is mounted on a test rig which allowed to obtain different readings for different heights. 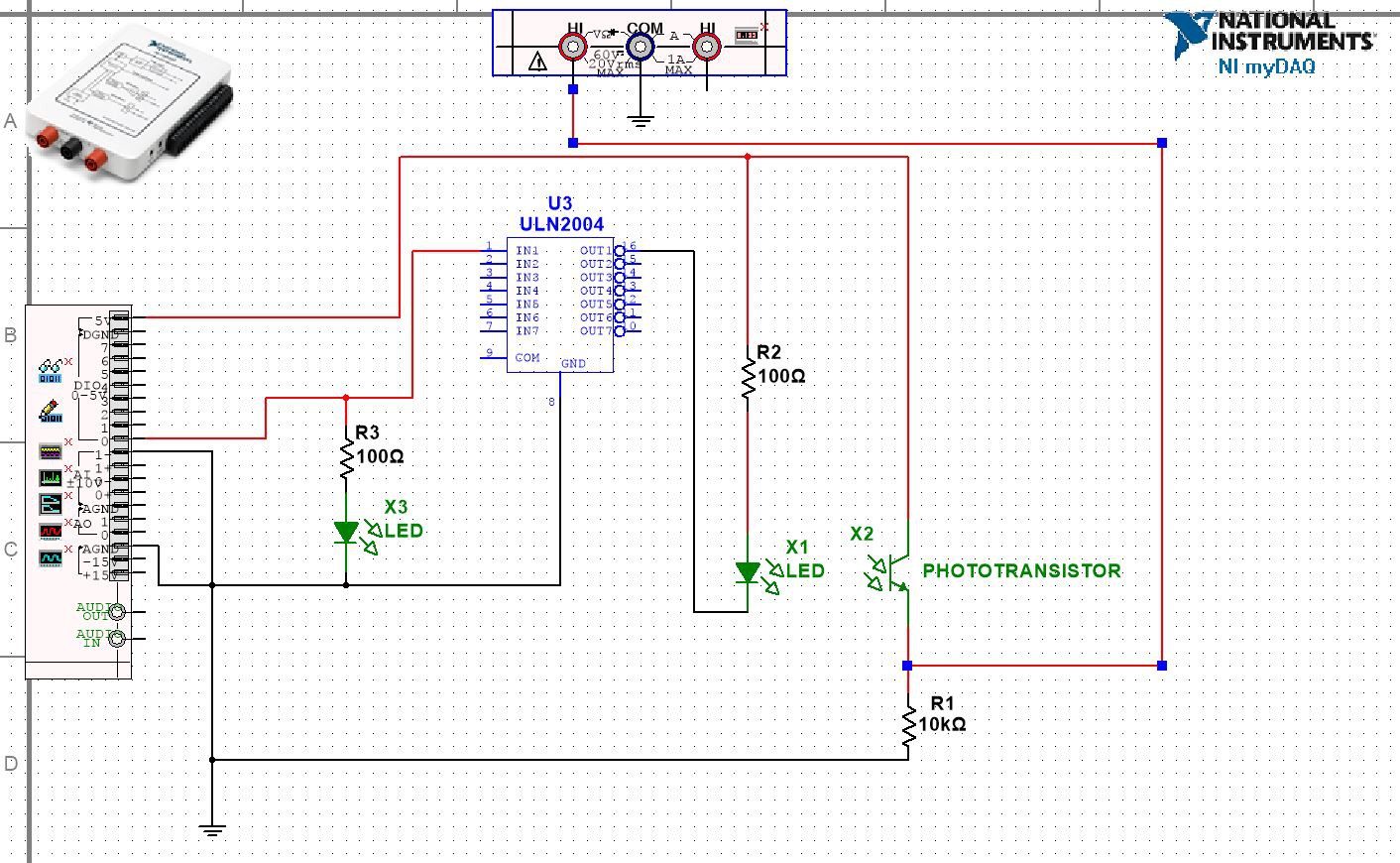 The schematic has been done on Multisim 12.0 from National Instruments. 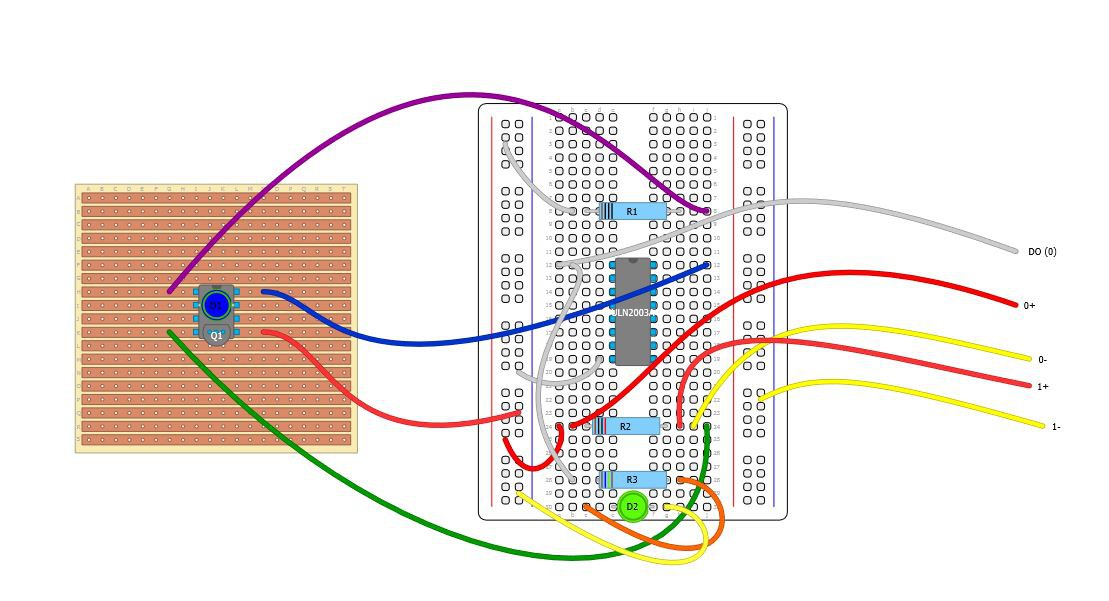 The Layout drawing is made with DIY Layout creator and is above in case you need to follow the set up step by step.

So once I built it and got it to produce meaningful data, it was time to move on to produce a printed circuit board. During the first year we learned and used Altium Designer which is an industrial standard to design PCB´s, however on this project I decided to use Eagle Cad 7.5.0 as there is a free version available, hence more people would have access to it as well as my files for the pcb.

Introduction to the project!

Designing a Pcb for the Line sensor Array II