An affordable Fitness Power Meter using an ESP8266 WiFi module, 4 Strain Gauges in Wheatsone arrangement measured by HX711 24 Bit instrumentatin Amplifier.
It fits onto any type of bike with minimal intrusion to the mechanical integrity of the bike.

My incentive with this project to explore and develop a system which will drastically bypass the high costs down to a level where they would be standard factory fitted by default and affordable by all the young&veteran racers out there. (off the peg prices to date $20 to $30- ).

The Basic system requirements are in this order :-

(two part epoxy's can be used also however care has to be taken to ensure the gauge is tight to the surface). 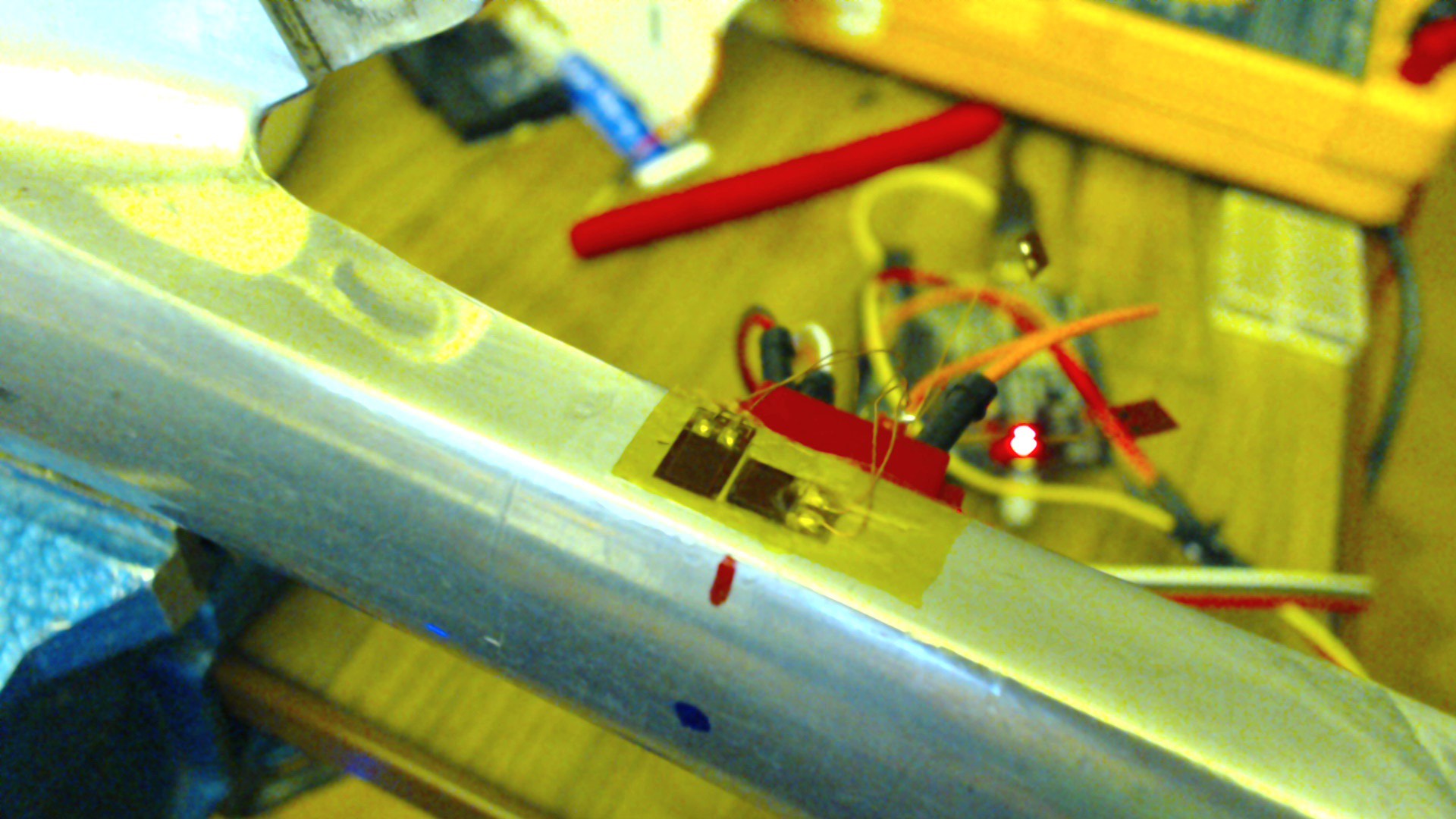 Surfaces must be flat and smooth , here 240 grit wet&dry sandpaper was used followed up with a metal polish, degreasing was done with Acetone. Care has to be taken that no oil or grease from fingertips etcetcetc comes into contact with the surface or strain gauges until the glue_ing stage is finished. 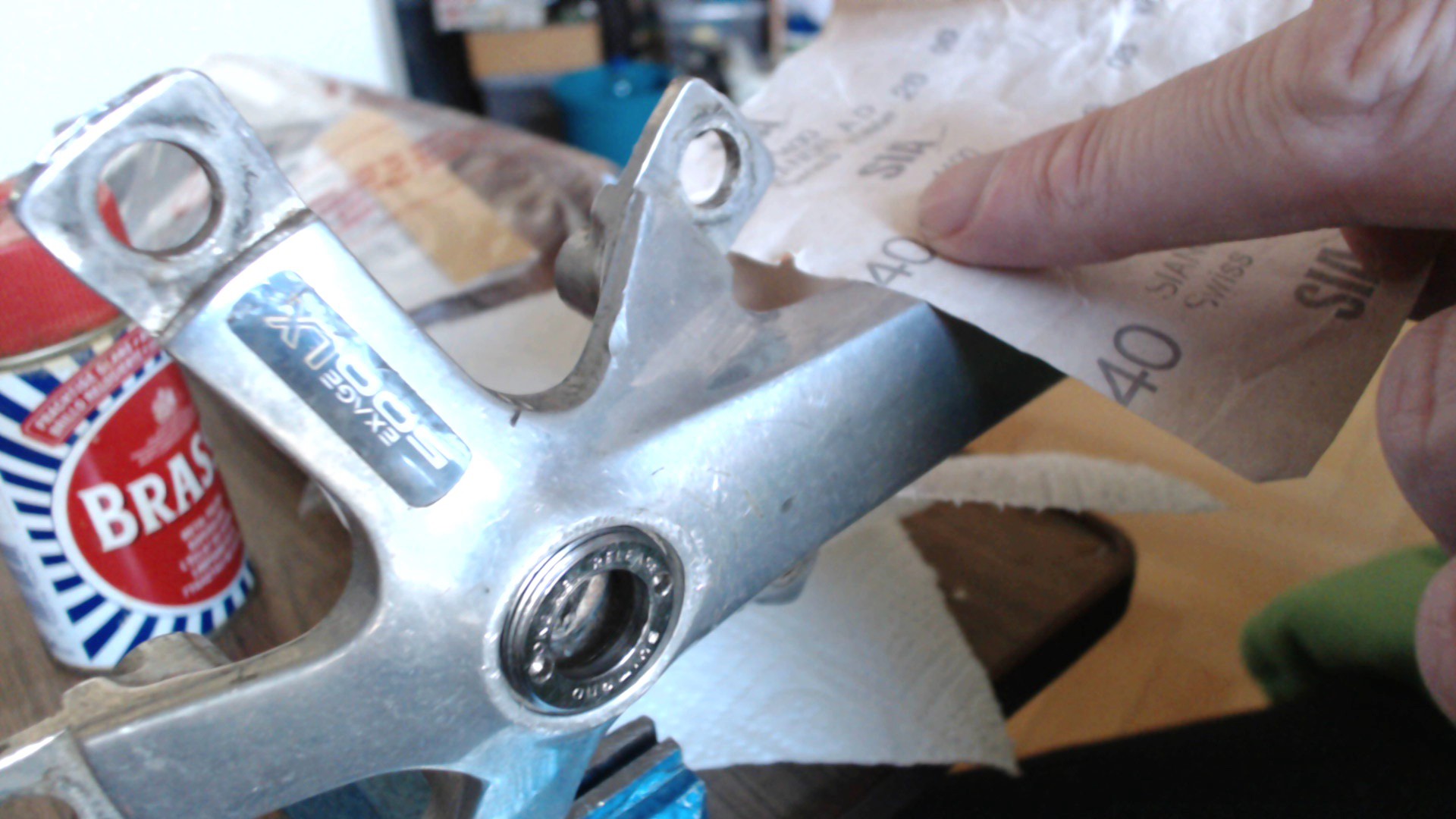 ....and placed on the crank in this configuration :- 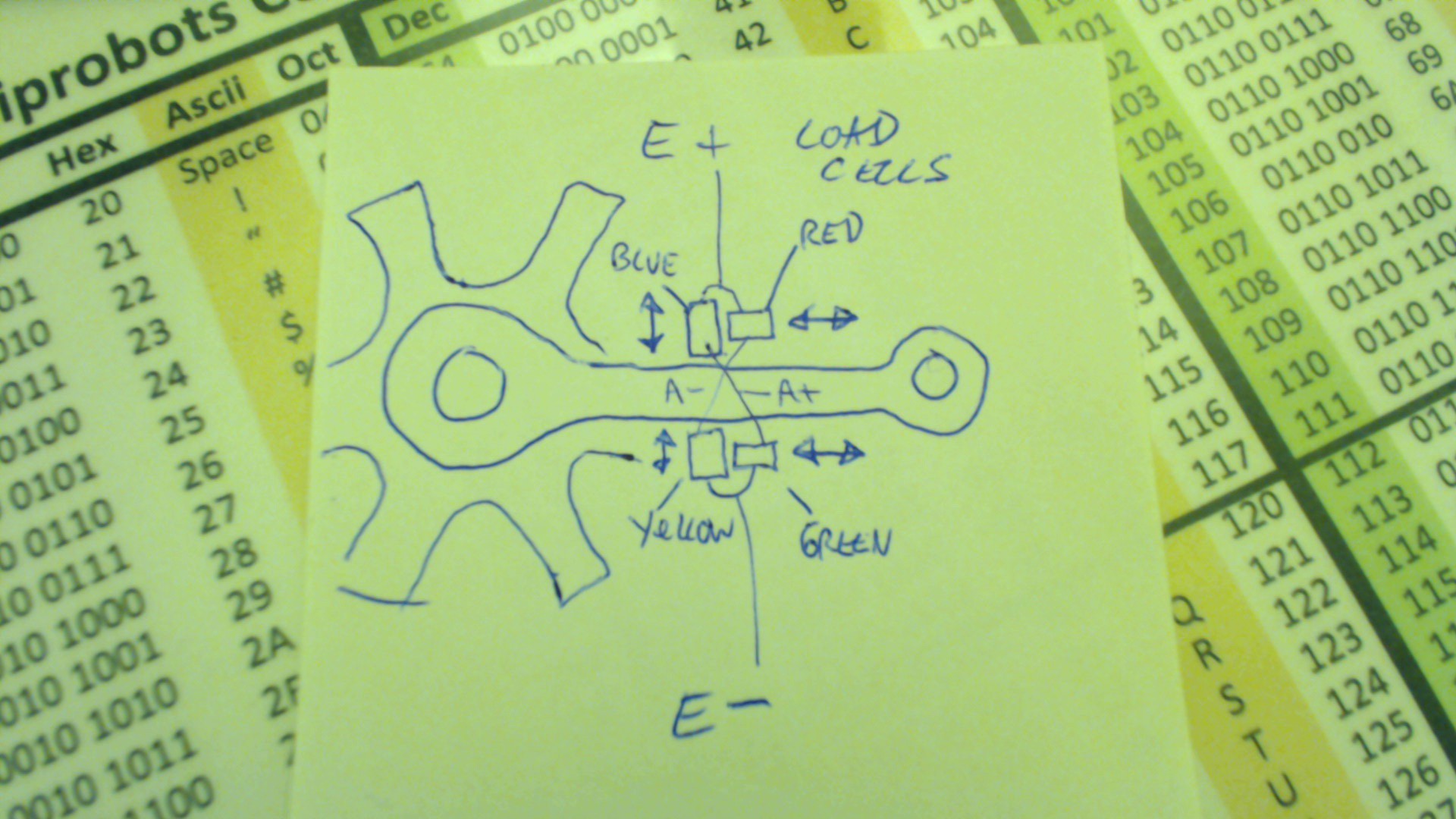 Notice the orientation , the horizontal one is the active cell and the vertical is the temperature balance one (effectively it can be regarded as passive) 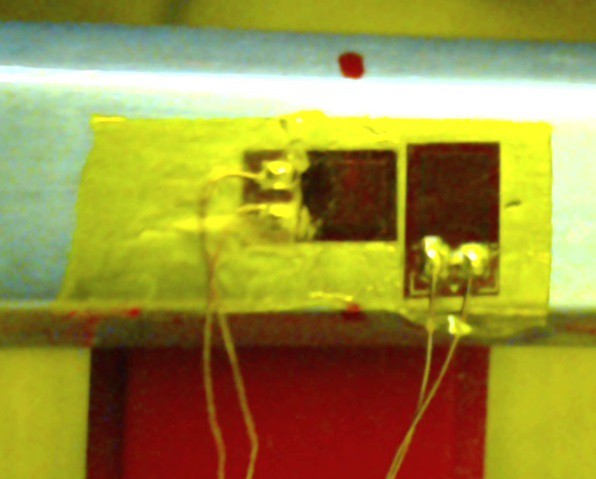 There seems to be not much information about the positioning of the load cells, most show them placed half way on the crank, alternatively they can be placed within the hollow type axles for torsional data. The latest method is to place 3D force sensors inside the pedals as the force vectors are not only "down the track line".

Below is one of the cranks I broke whilst training on my "Rollers", so it makes me think they should be placed here instead :- 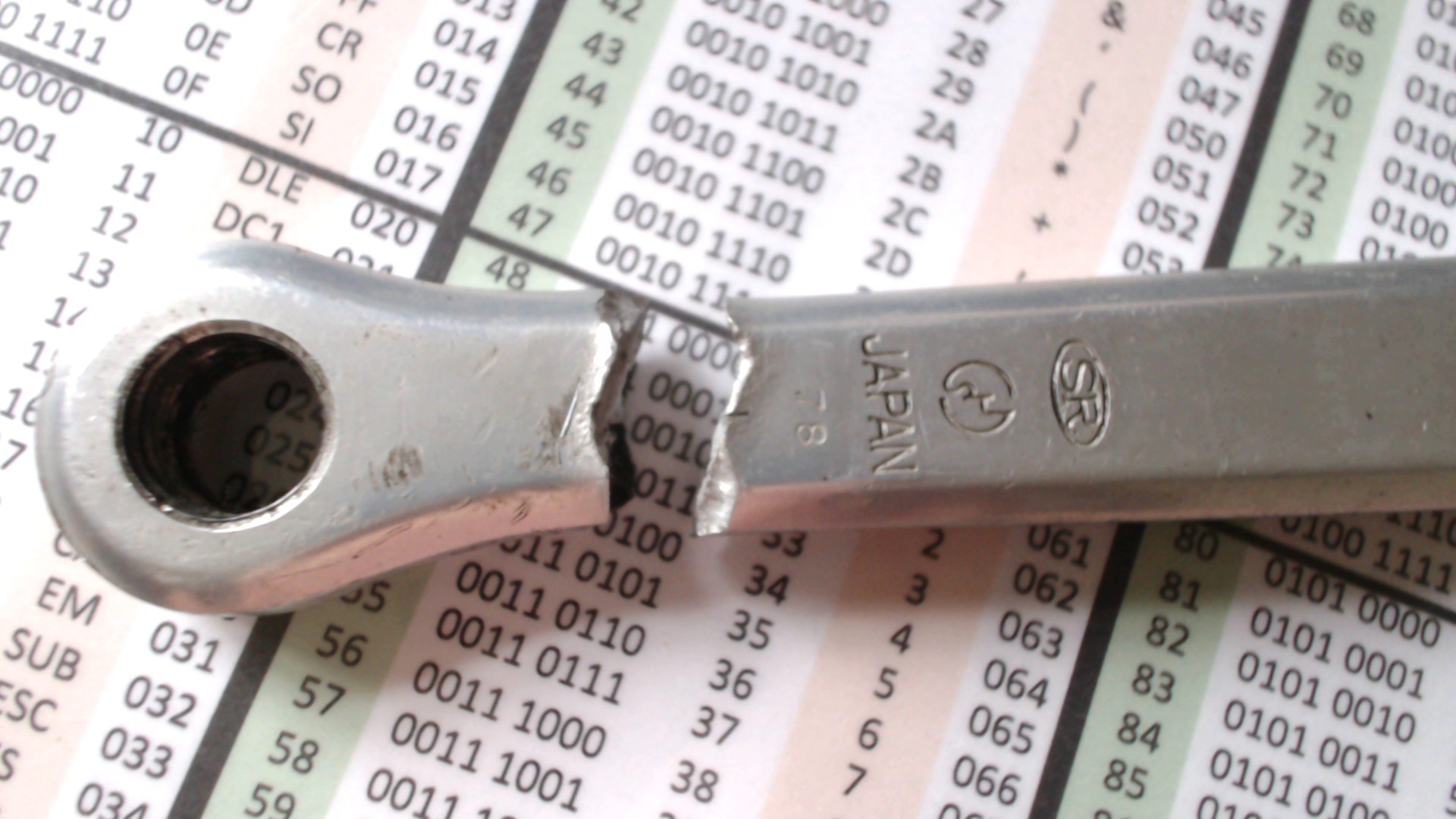 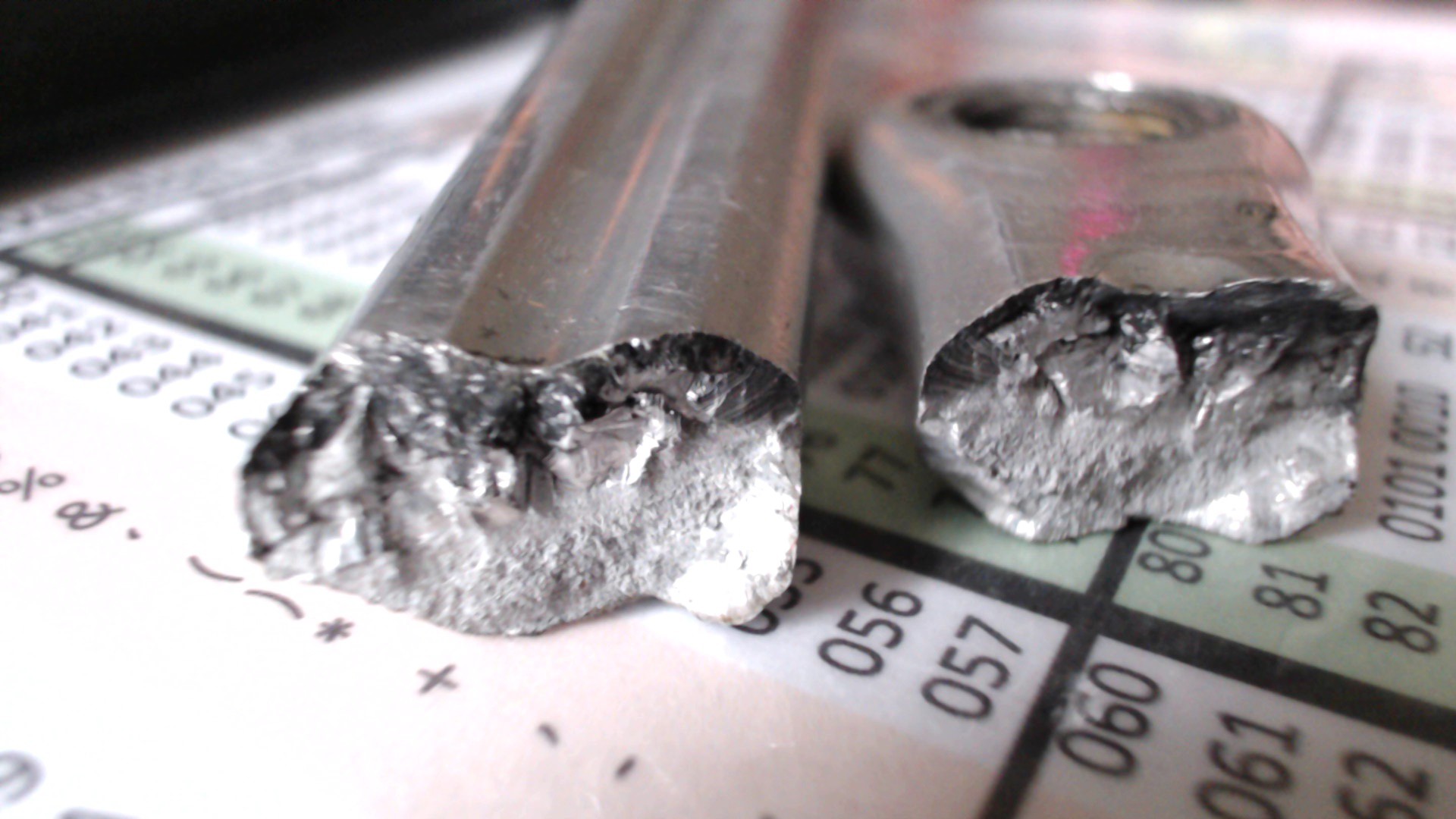 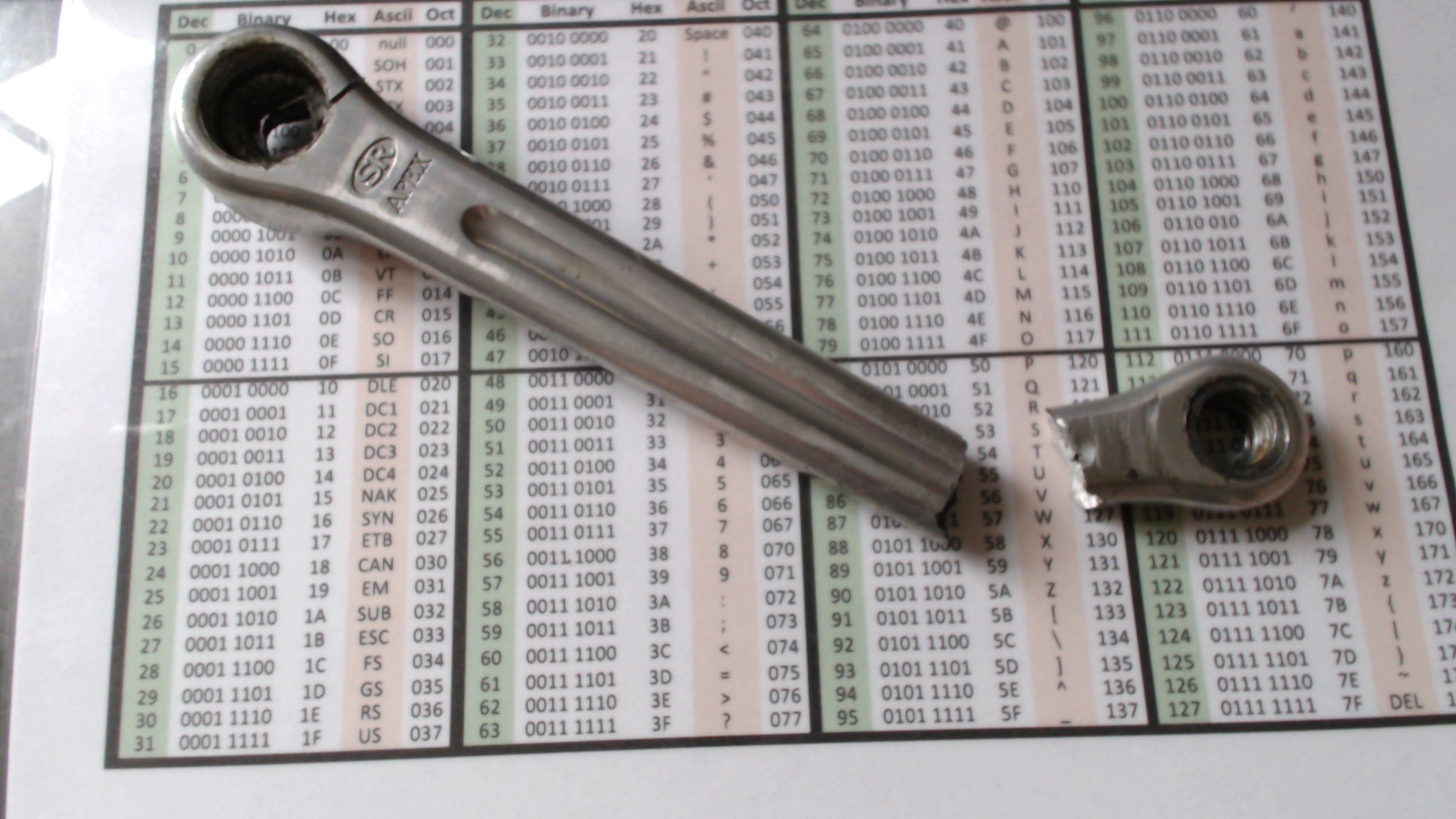 The Build in more detail .

This will be affixed to the crank arm and transmit its serial derived data via WiFi to handlebar GUI (also an ESP8266 in server mode) , software very subject to change at momo until the mechanics are finished. 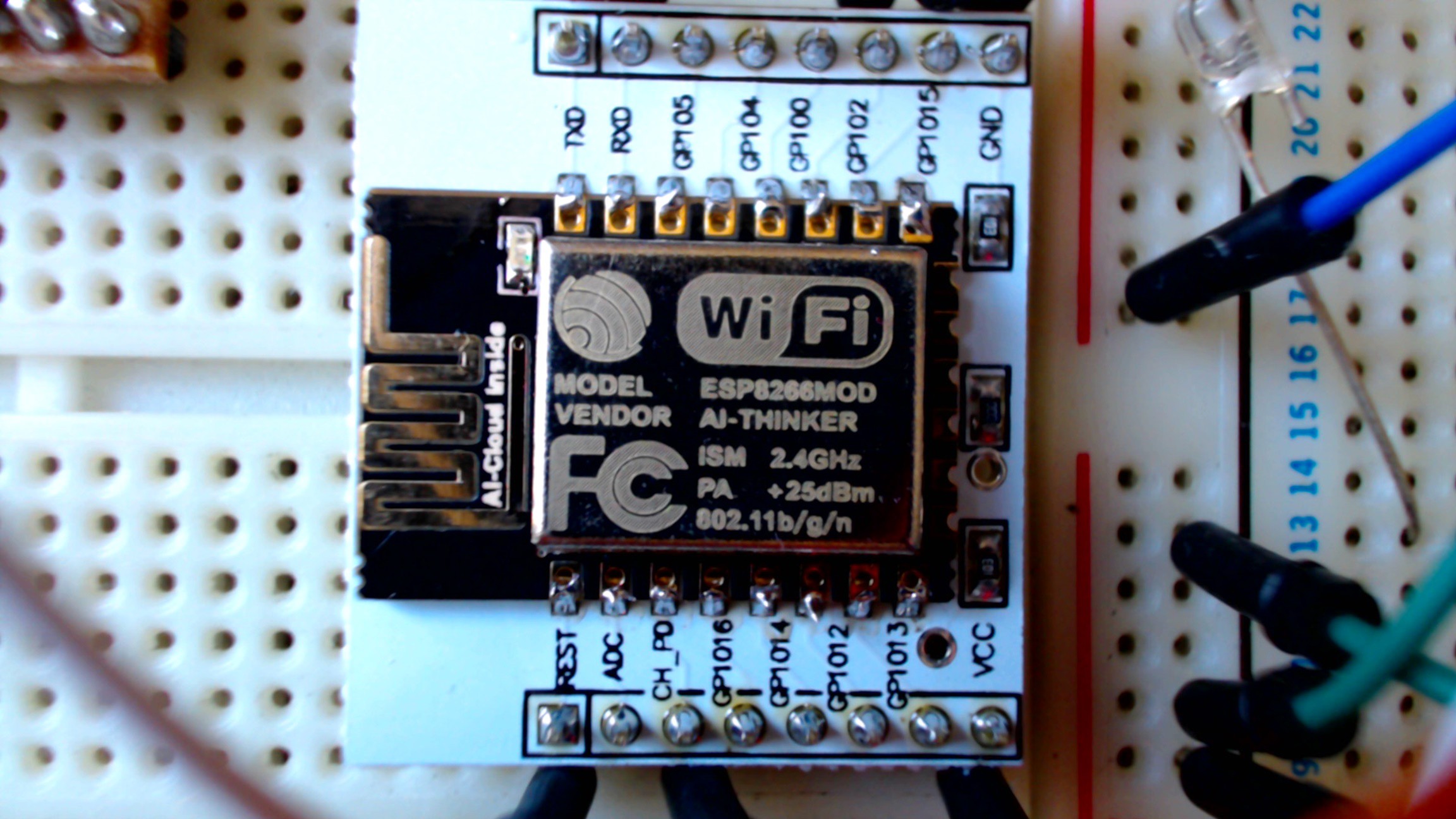 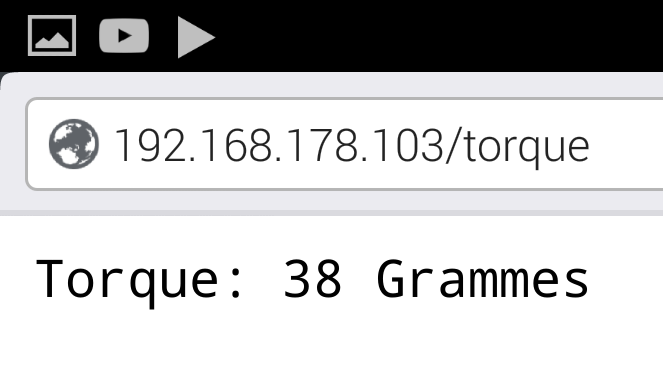 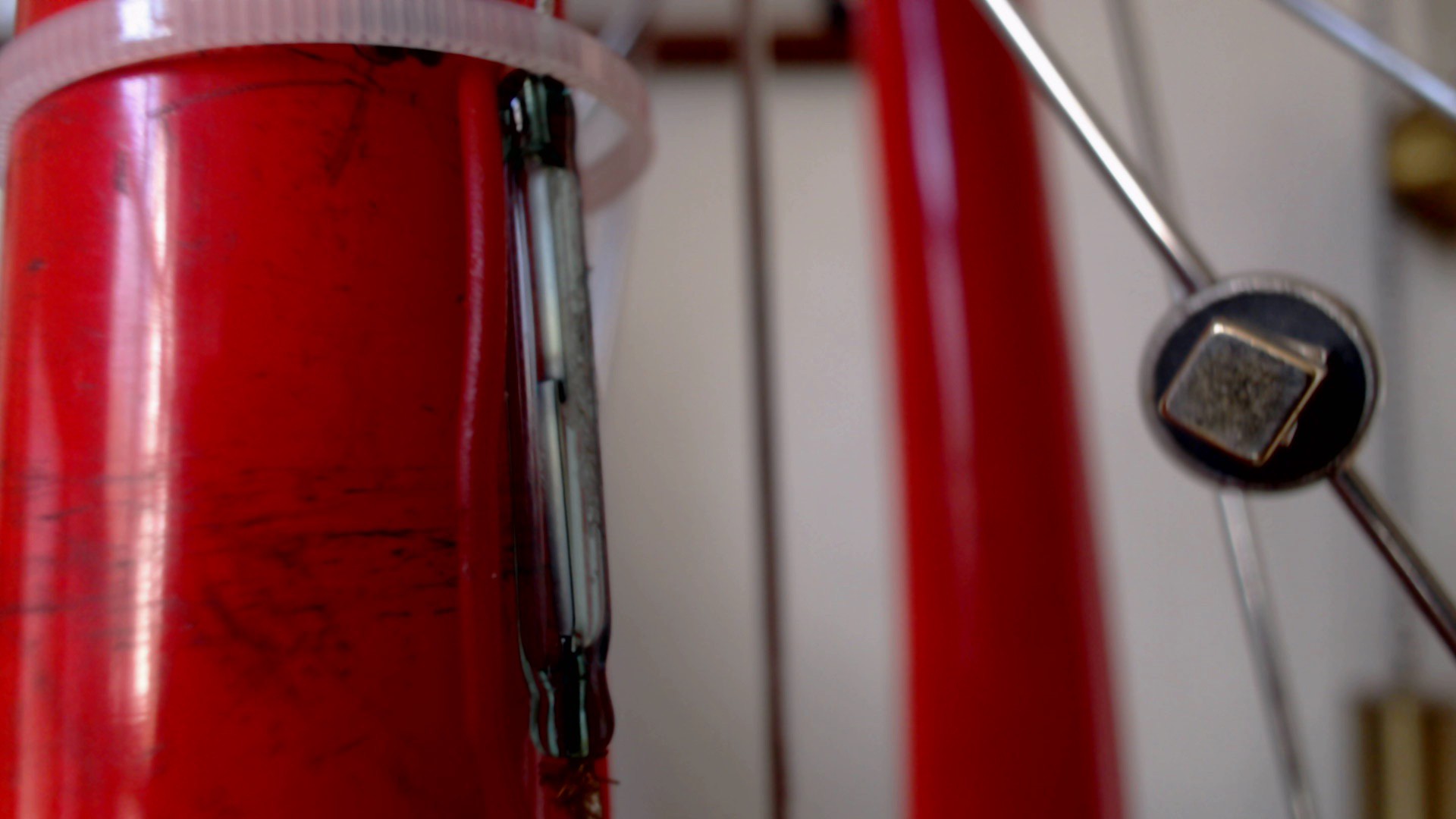 They are wired in a Wheatstone Bridge arrangement as below.. 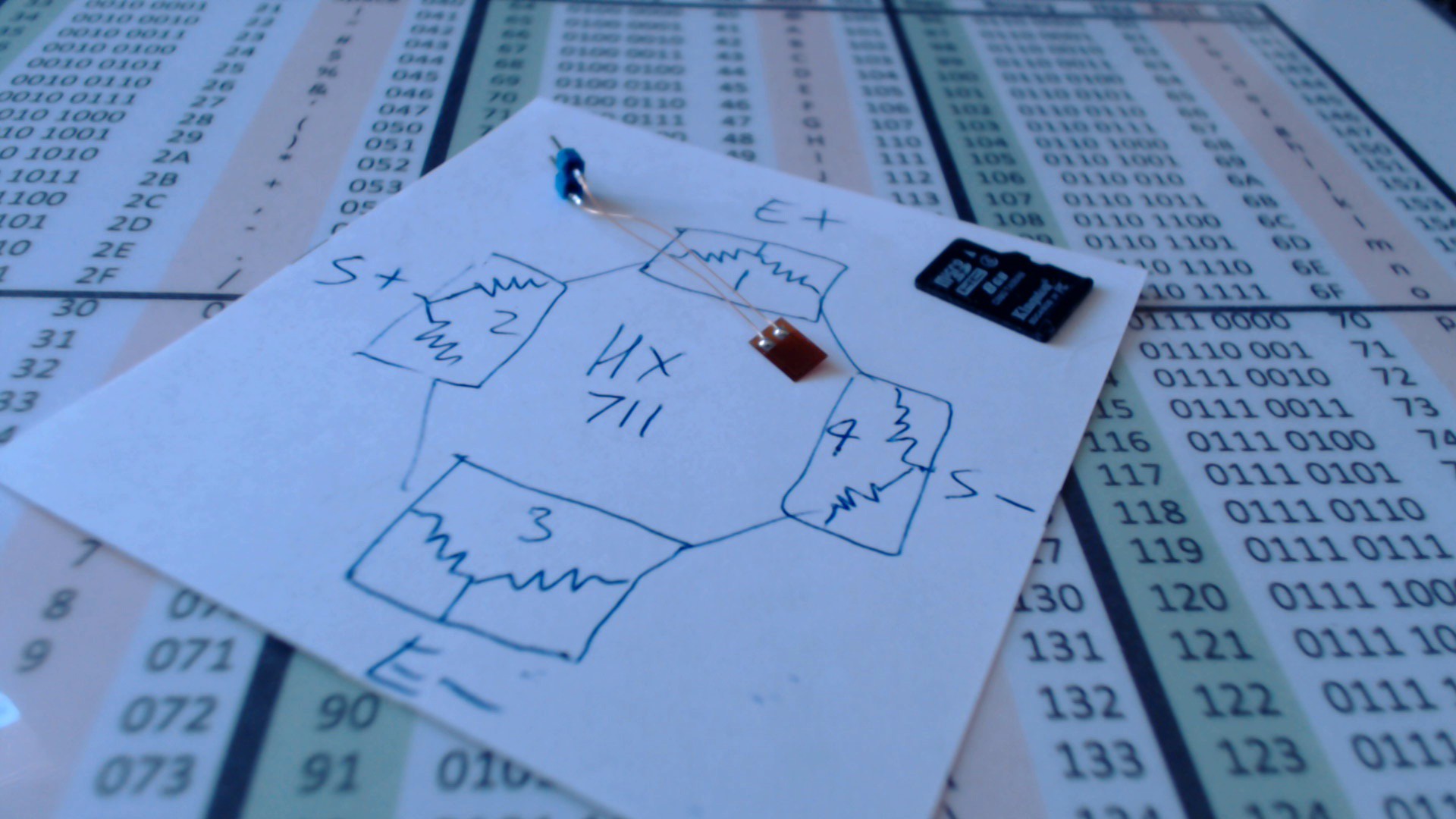 The load cells are tiny ( micro sd card give comparison ).

I am using a complete set of 4 load cells, 2 active ie one in flexion config and one in extension config (one on top of crank and one below to get max deflection)

The second 2 load cells are passive in the bridge arrangement and act as balancing resistors that compensate for temperature changes (and to some extent noise).

The load cells are fed to a HX711 Instrumentation differential (2 channel) amplifier which when polled spits out the data for calculating applied load. 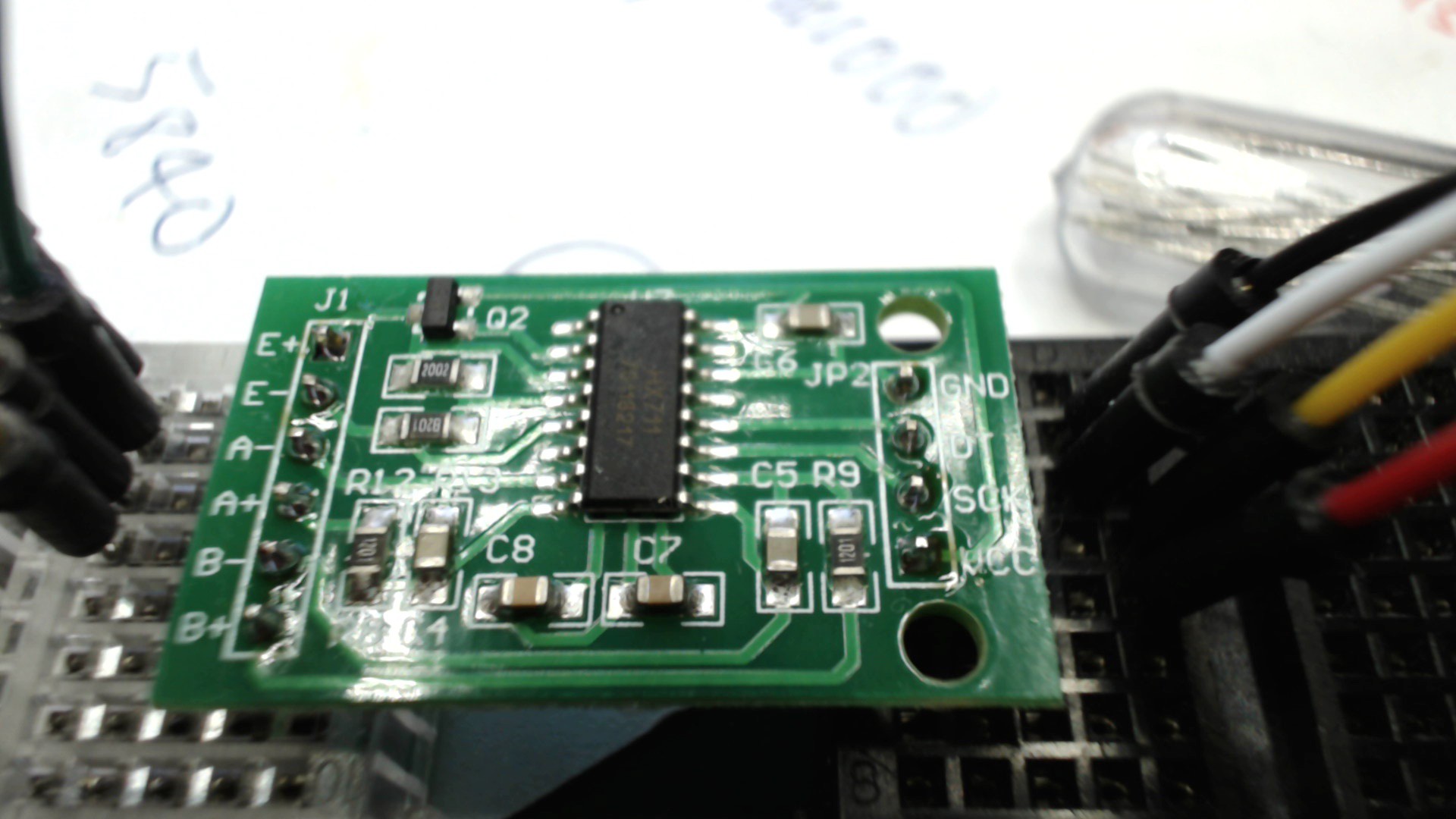 Hi, I have nearly finished my project of powemeter on a crank but I'm struggling with a code to handle measurements from strain gauges. Could you help me with it, maybe by sharing a code for it?

Hi Gareth, your project could solve a common ebike problem: Ebikes with midmotors don't perform very well when in pedal assist mode, because a human power meter in the drivetrain (like a torque sensor that measures the chain tension) gets drowned by the power of the midmotor that is delivering it's power on the same chain. So you must either use a primary (human power) chain with a secondary (motor power) chain or use a torque sensor/power meter closer to where the human power is inserted in the drivetrain.

A crank or pedal power meter with (thru a wireless interface) a linear output of 0 to 5 volts would create a perfect pedal assist system for combining human and motor power in a harmonious way.

BTW, to create more flex on a crank you can cut a 1 by 30 mm slit lengthwise in the crank.

What kind of stain gauges are u using  ?

I see you have a lot of ideas.  Which is a good thing, but it is very difficult for one man explore all the possibilities.  While it's a cool project to design the whole thing ground up, including the head unit and the sensors,  it's not very realistic.  Imho you should focus (at least for now) on the power meter sensor as this is the most sensitive area for many cyclists.   A head unit costs zero - i use my phone.  Even if i'm not so happy with the app interface, i can analyze data afterwards in an program of choice or use a different app.  A power sensor costs upwards of $400.  If i could buy or build one for a 100 i would do it.  I hope that this project produces an instructable on building such sensor.  It looks like you've got the most tricky part covered already, that is sensors and amplification, you a getting a nice clean data at 80Hz into your microcontroller.  What remains is data transfer,  power and packaging.
Don't get me wrong i appreciate your work very much, i just like it to be useful to others too.

Did you manage manage to record any real data from riding a bike outside or on a trainer.  It would be interesting to compare measurements with a commercially available powermeter.

All in good Wizard time_ing, crawl, walk, run, cycle not in this particular order though.

Thanks for the comments, project is still developing in more ways than one, so I dare not miss any of the important sidetracks, motorways are so over rated.

Awesome project, following it for sure :) What are the battery requirements, are you using coin cell?

My idea is to use Lipo cells as button cells will not have enough capacity (if I use WiFi senders) to keep the system going for long.

I leaning into using Bluetooth BLE (smart) rf senders for the crank part of the project and maybe then I could get away with using button cells.

The strain gauges can be used on anything that flexes, however the bugbear is that the gauges must have a good adhesion to the surface to be measured.

Carbon is not the easiest material to glue, as resins are used to cure the carbon fibre's forms during manufacture.

The other alternative is to place the gauges on the spokes of the front chainset, on the pedal axle or even inside the hollow through hole axle you see on the latest cranks.

Yeah BLE is "plan b" at the moment , I might have to revert to this method if the battery requirements twist my arm further. There are ways to save power with the ESP8266 and this is the stage I am exploring now.

Linking into and accessing Garmin or other types of Power meters does intrigue me, I guess that would a chapter further up the hill . ( there are plus points to designing your own handlebar gui though).

Do the load cells rely in some way on the metallic properties of the crank?  Will they work with carbonfiber cranks?

Consider using BT LE instead of wifi, it should be possible to simulate an existing (commercial) powermeter, then it will work with phones and head units out of the box.