bensax • 10/03/2016 at 22:38•0 Comments
SupplyFrame recently released a new episode of Open Source following Perceptoscope. You can check it out above. They've also been documenting all our time at the lab via their podcast Inside the DesignLab which is definitely worth a listen. I'm interviewed in the first and third episodes.

Last week we made big progress on the main body of the shell positive, but I still needed to fabricate 5 more elements of its shape before we could take this positive to be vacuum formed.

Since 2D operations were previously successful on the ShopBot, I figured it was time to try for a 3D milling. We'd start with the transparent Iris that the optics look out through. Using Vcarve Pro, we broke the 3D object into multiple slices and generated all the different tool-paths required to give us the proper angles along the slice edges. It looked a little rough when I took it off the bed, but fortunately its faceted shape meant I could clean it up pretty easily on the belt sander. 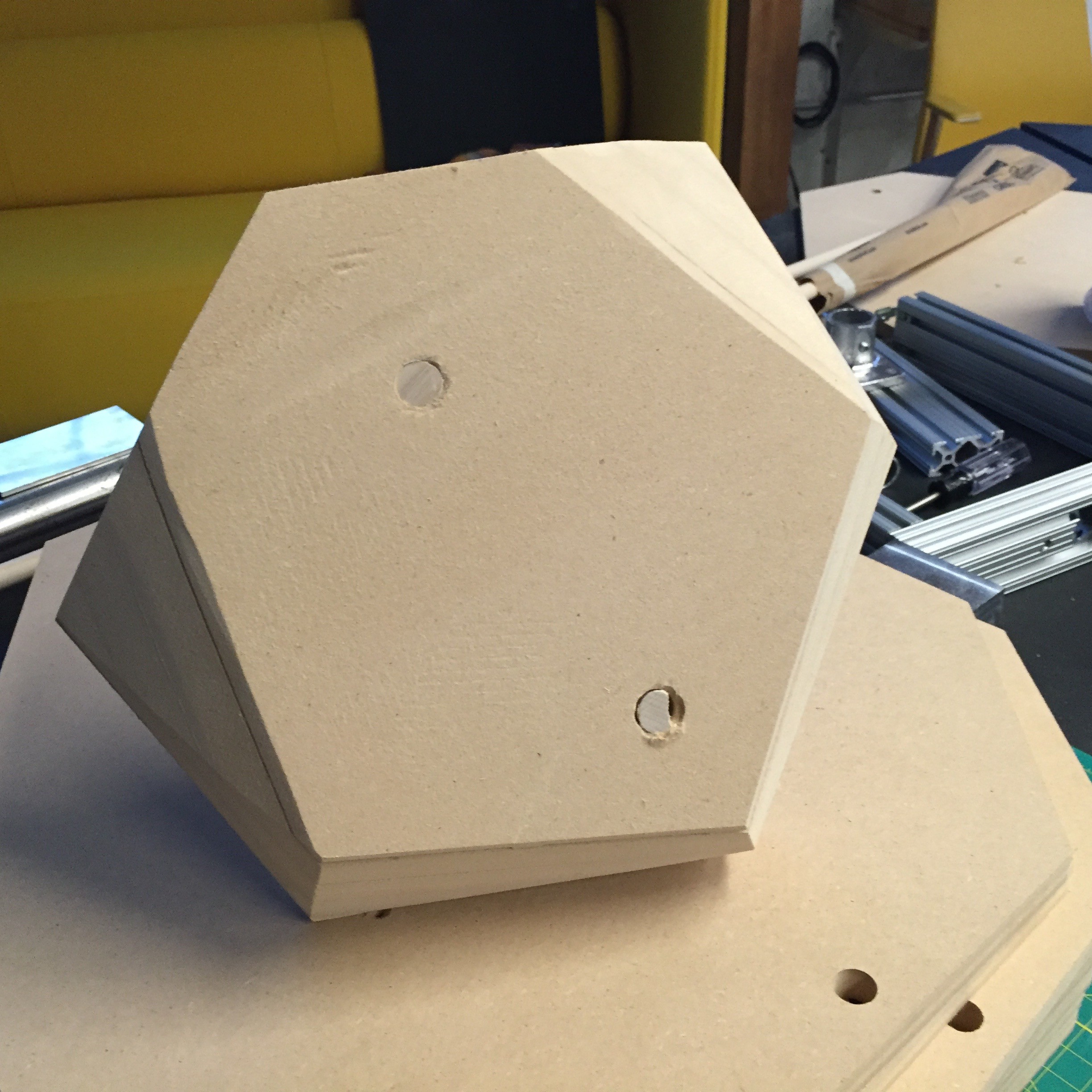 The rest of the pieces are a bit more complicated, so I wanted to experiment with a different approach. Desiring speed and efficiency, I gravitated towards the laser cutter. The idea is to laser cut an internal ribbing for each piece out of MDF, and then shell it with laser cut card stock. 123D Make proved to be an amazing tool for generating the forms. 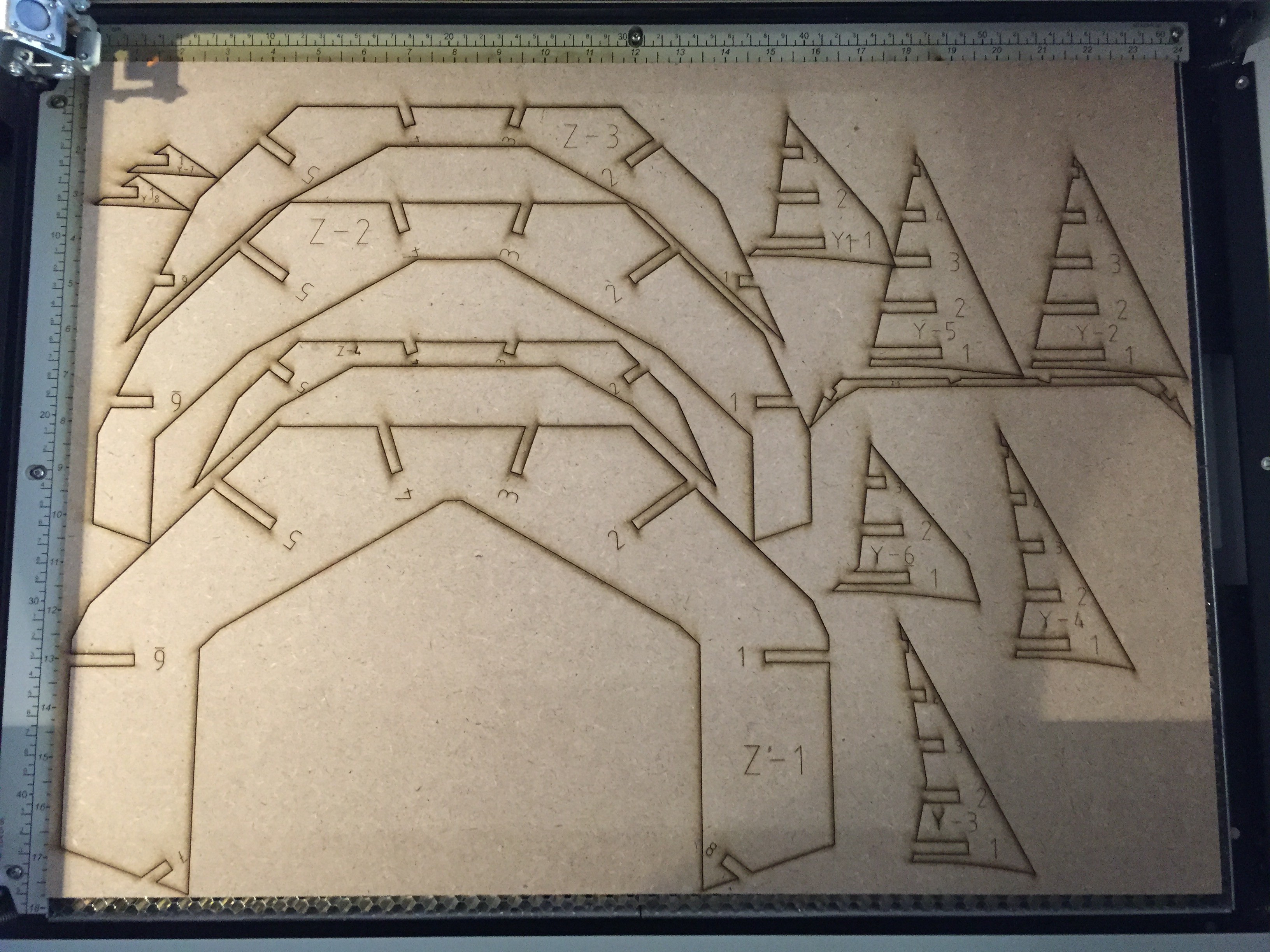 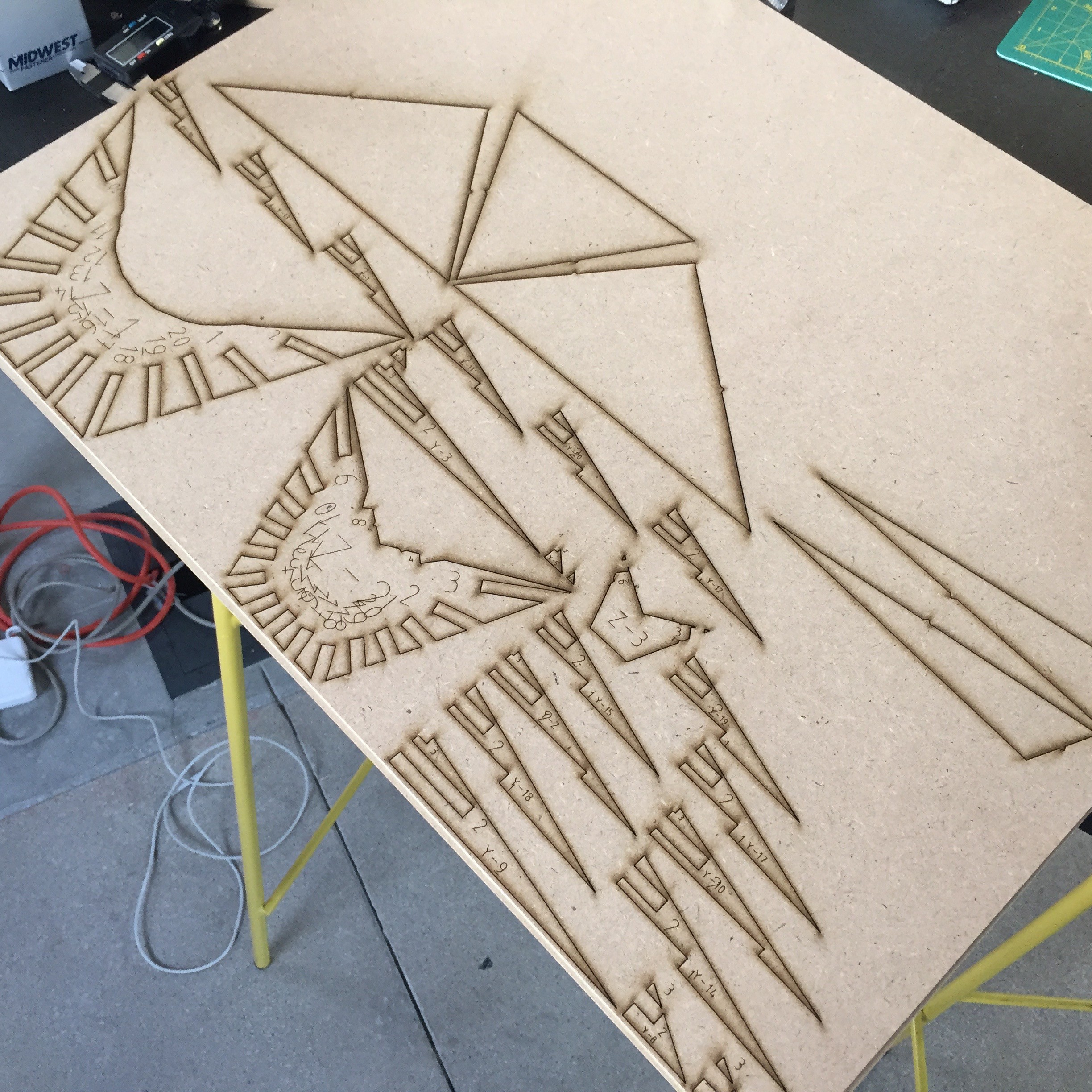 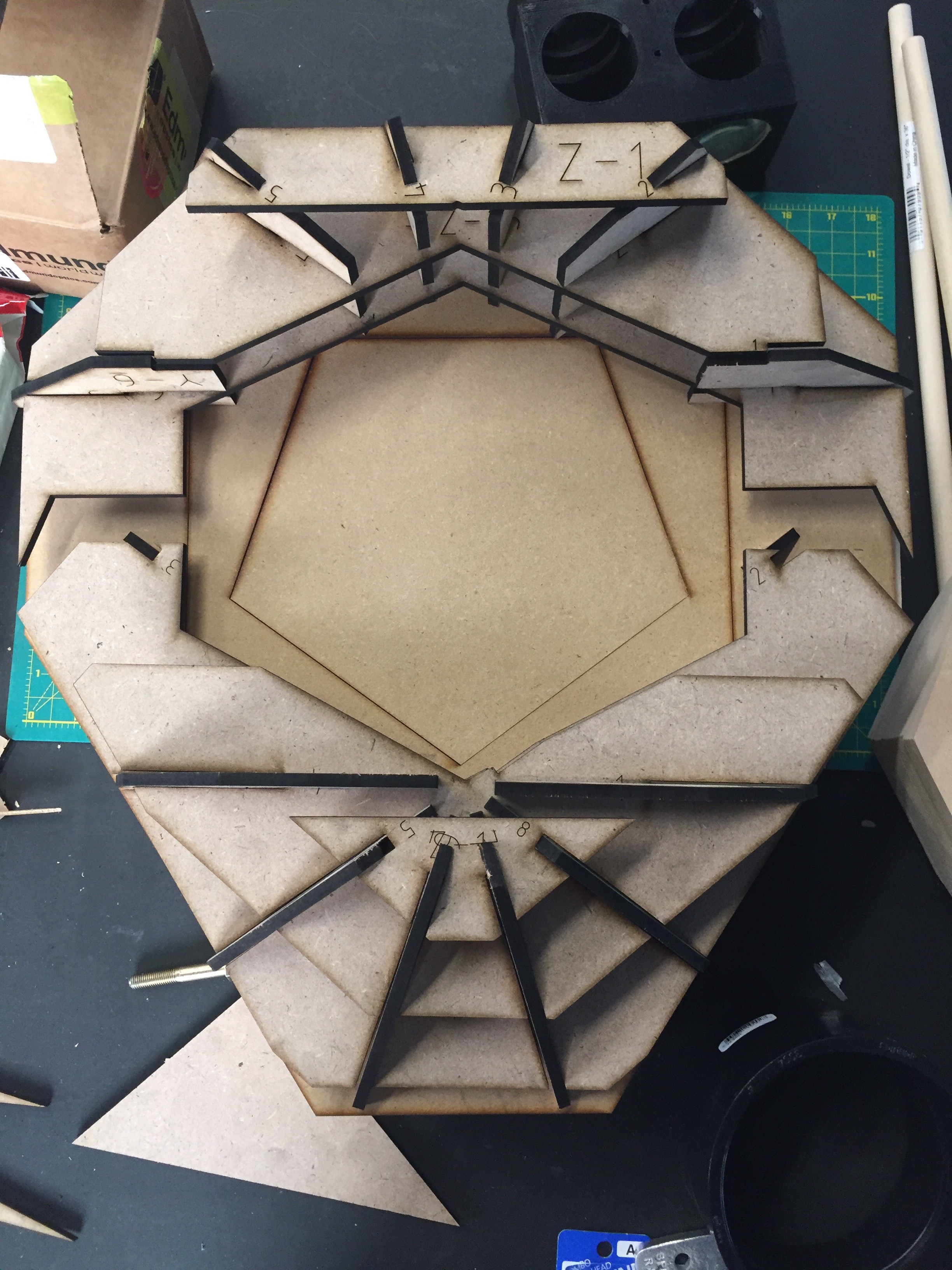 The ribbings turned out looking quite beautiful. I glued them up to give them strength, and left them to dry overnight. 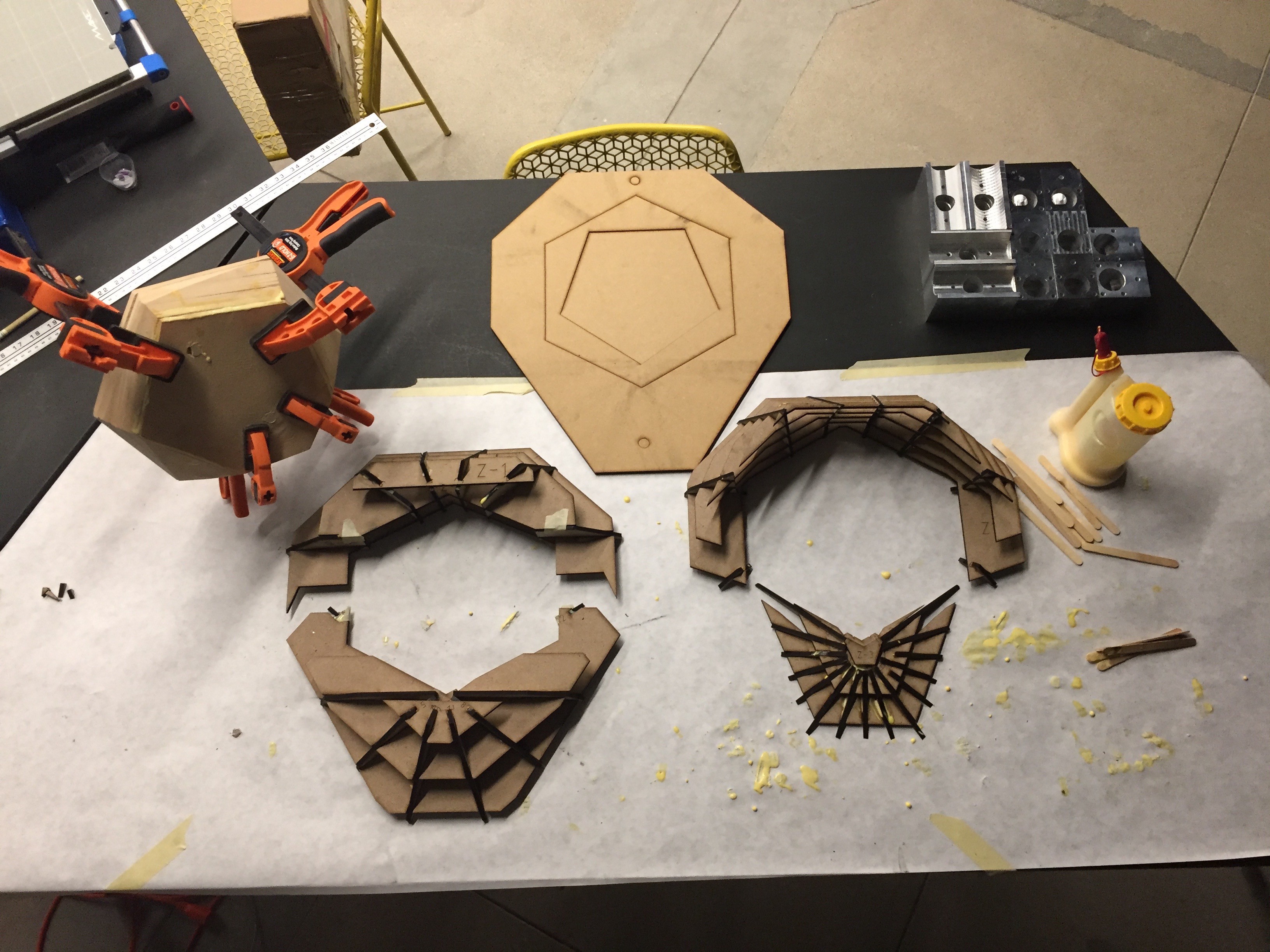 I also found some time to sneak over to CRASH Space for a bit so I could build out the yoke assembly with the help of their drill press. 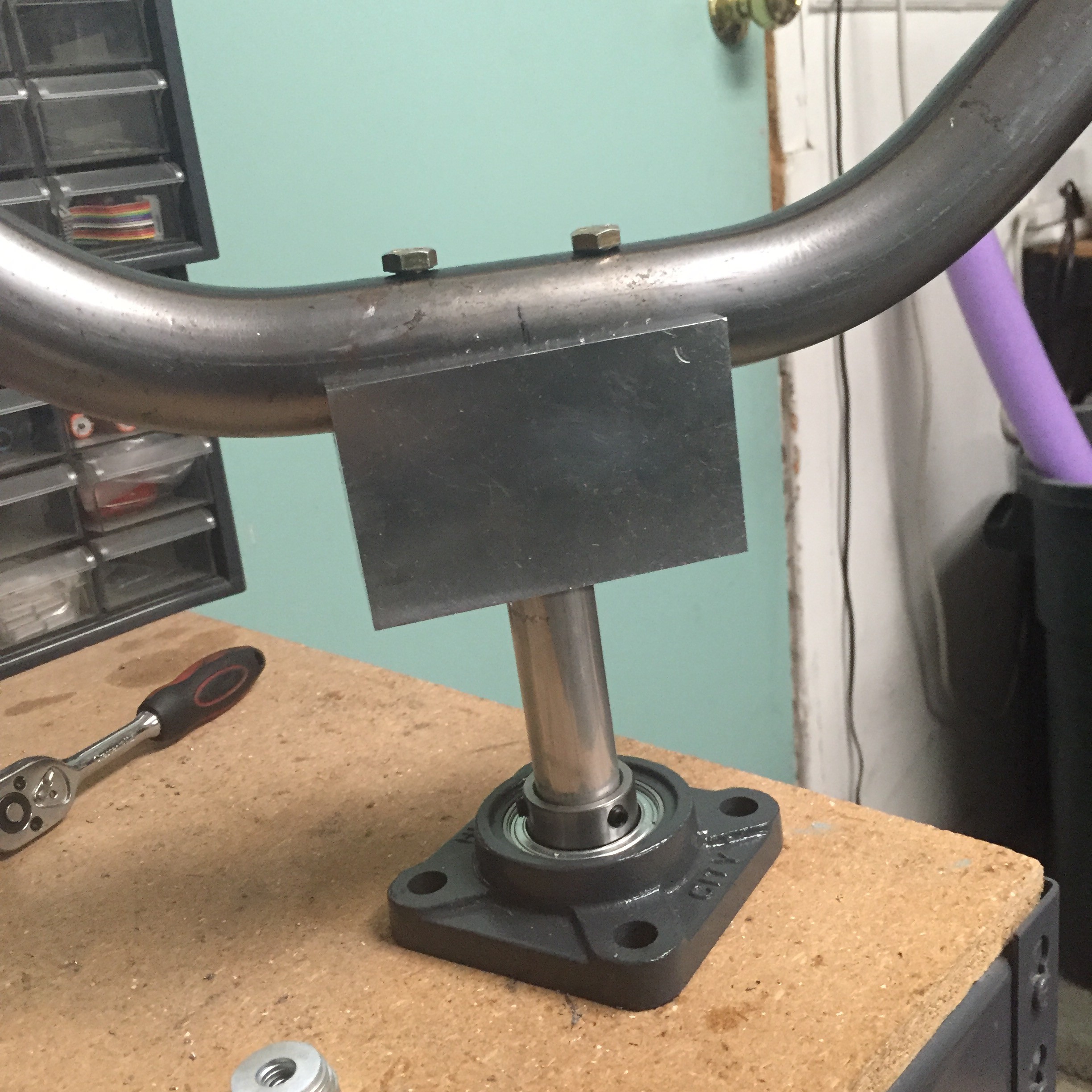 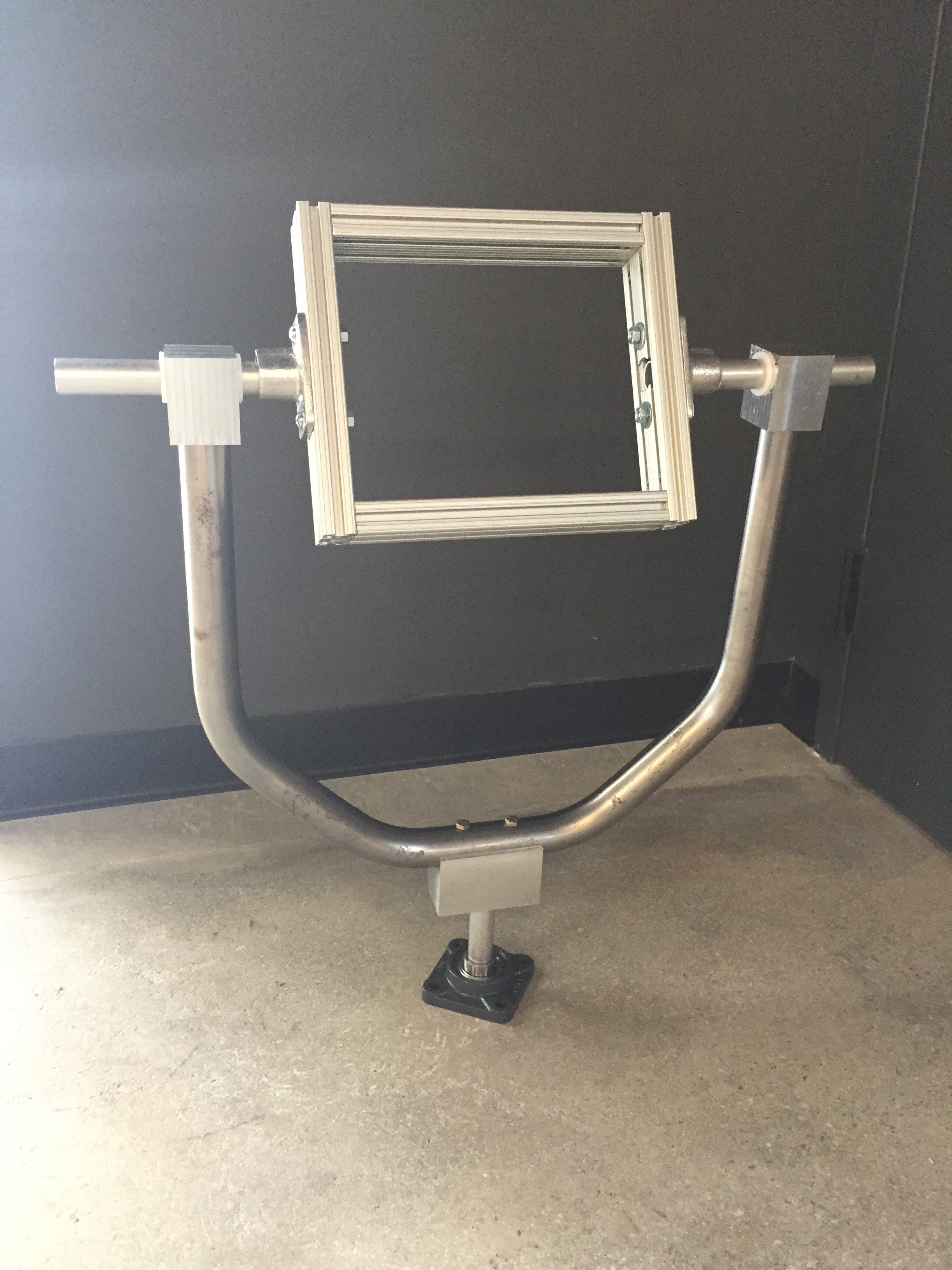 It's feeling both strong an balanced. I'm excited to finally start mounting components.

Back at the Lab, I laser cut the shells of all the forms out of card stock, and finished up the remaining elements. 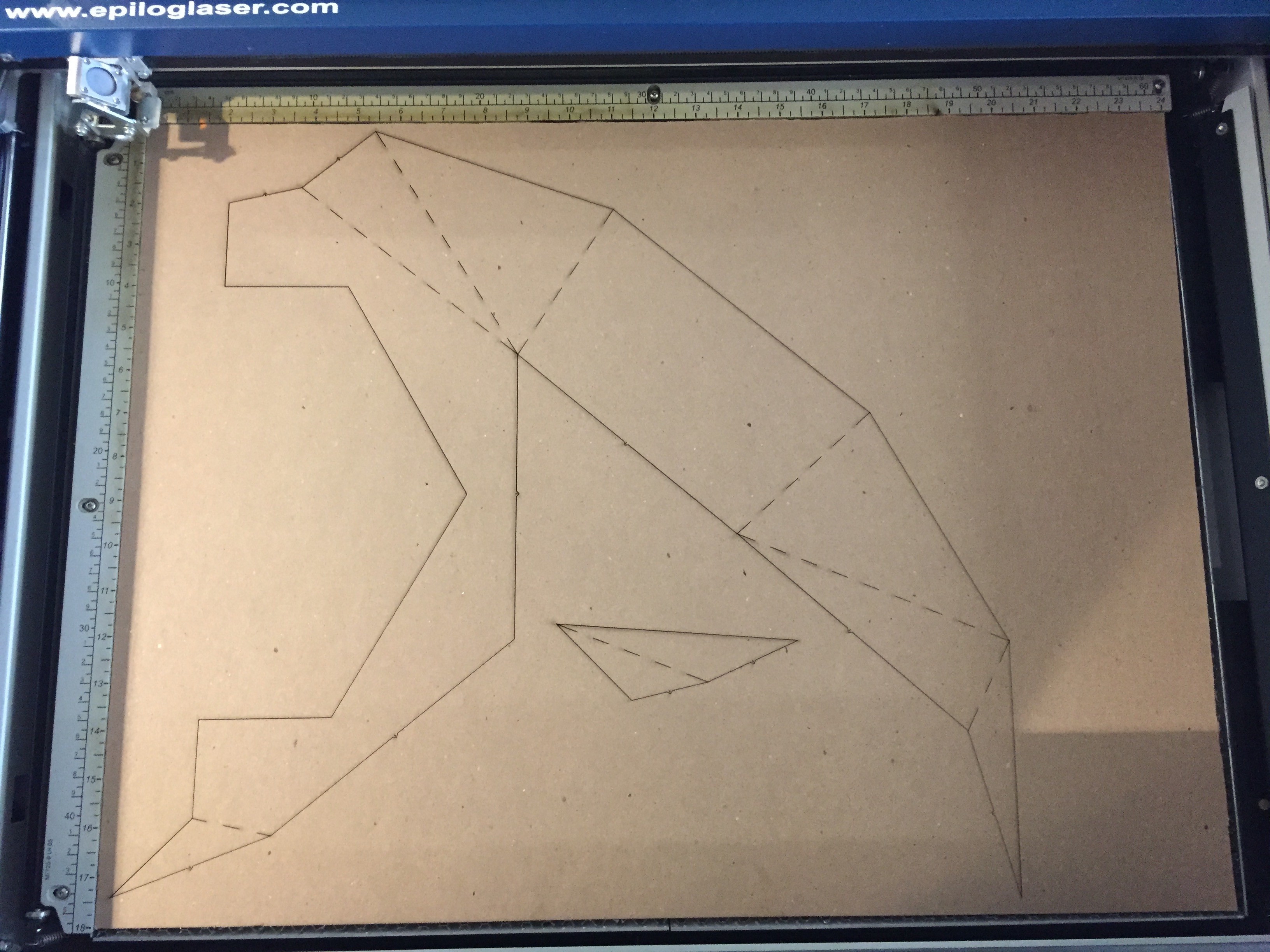 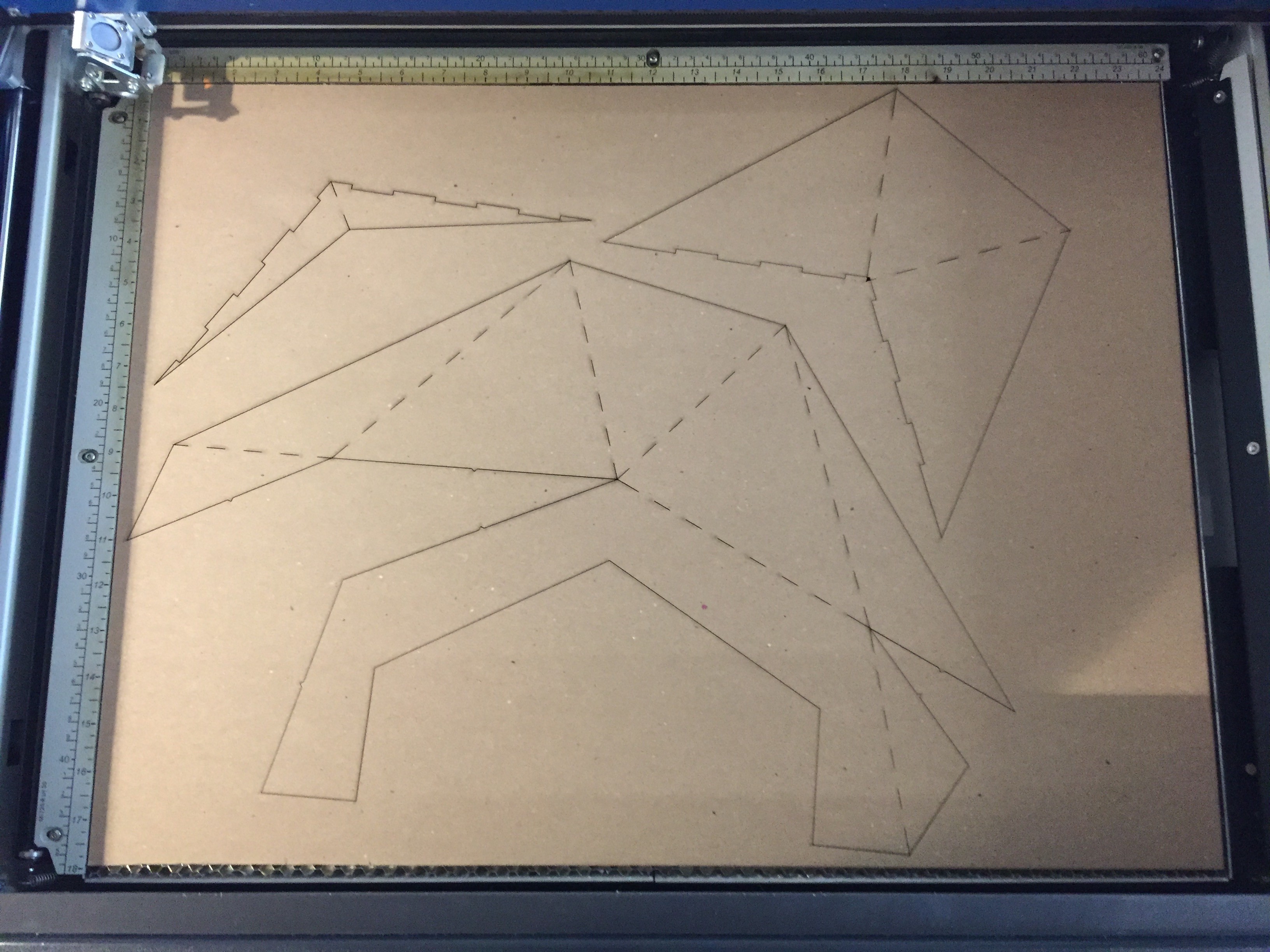 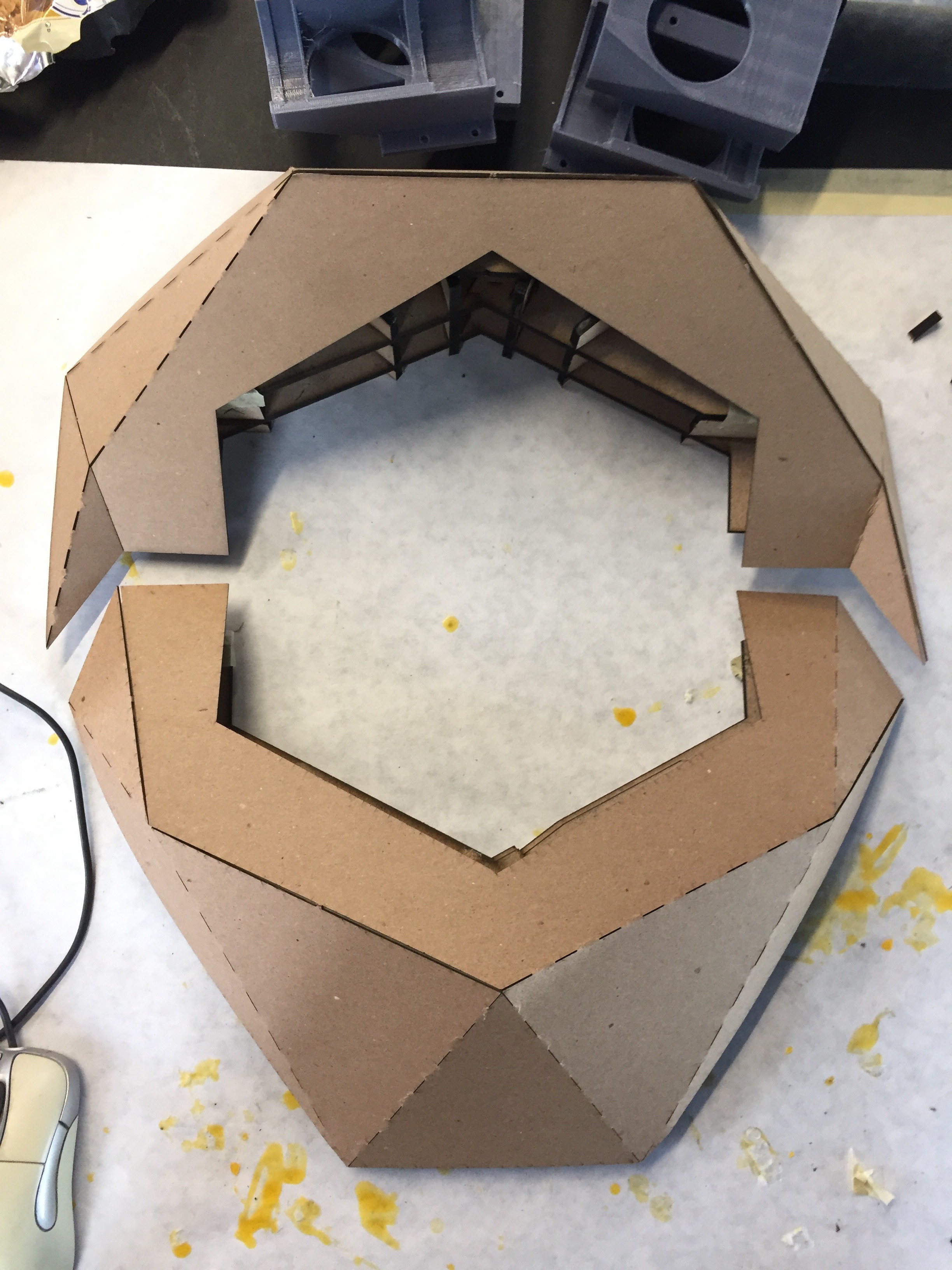 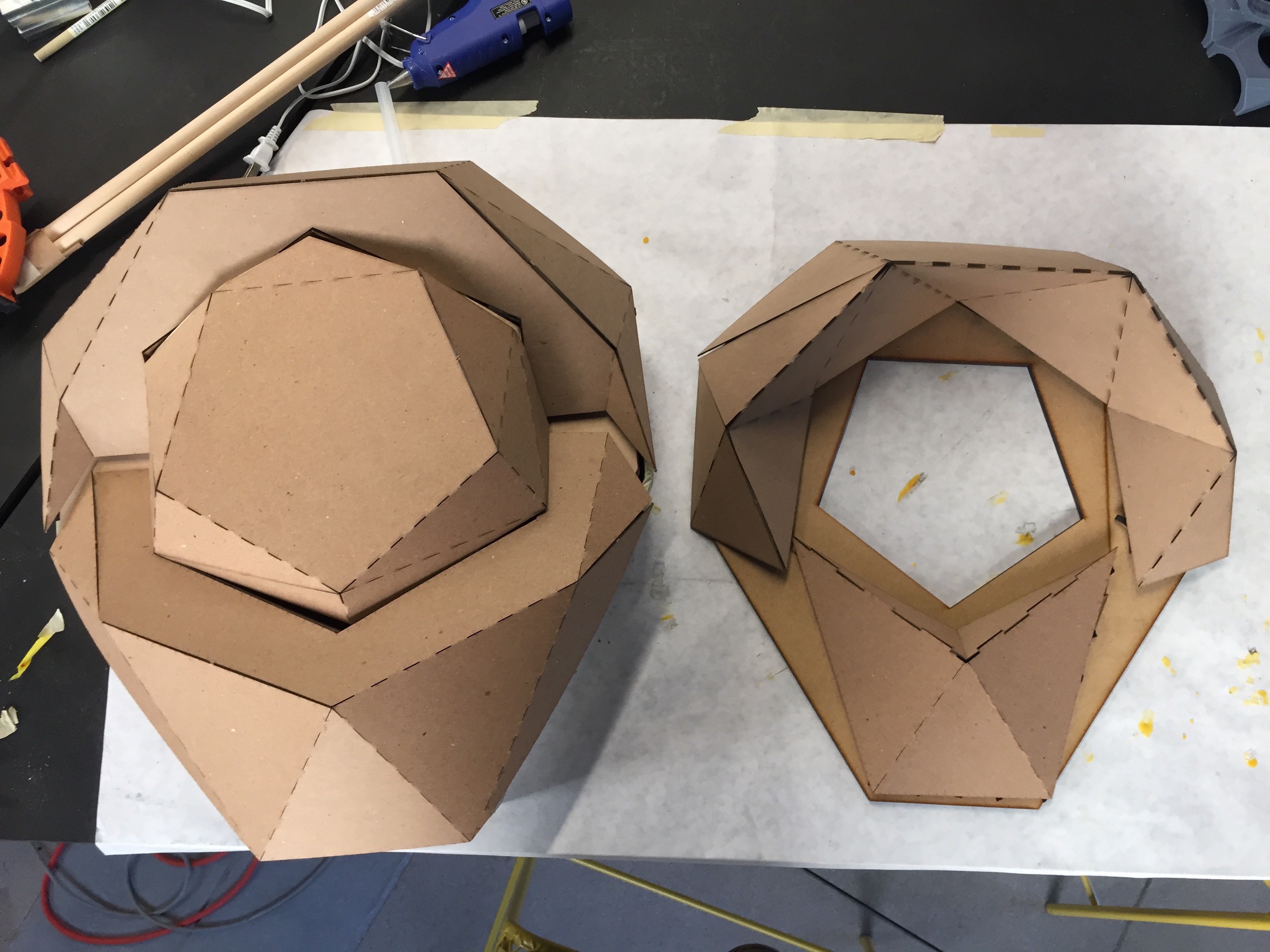 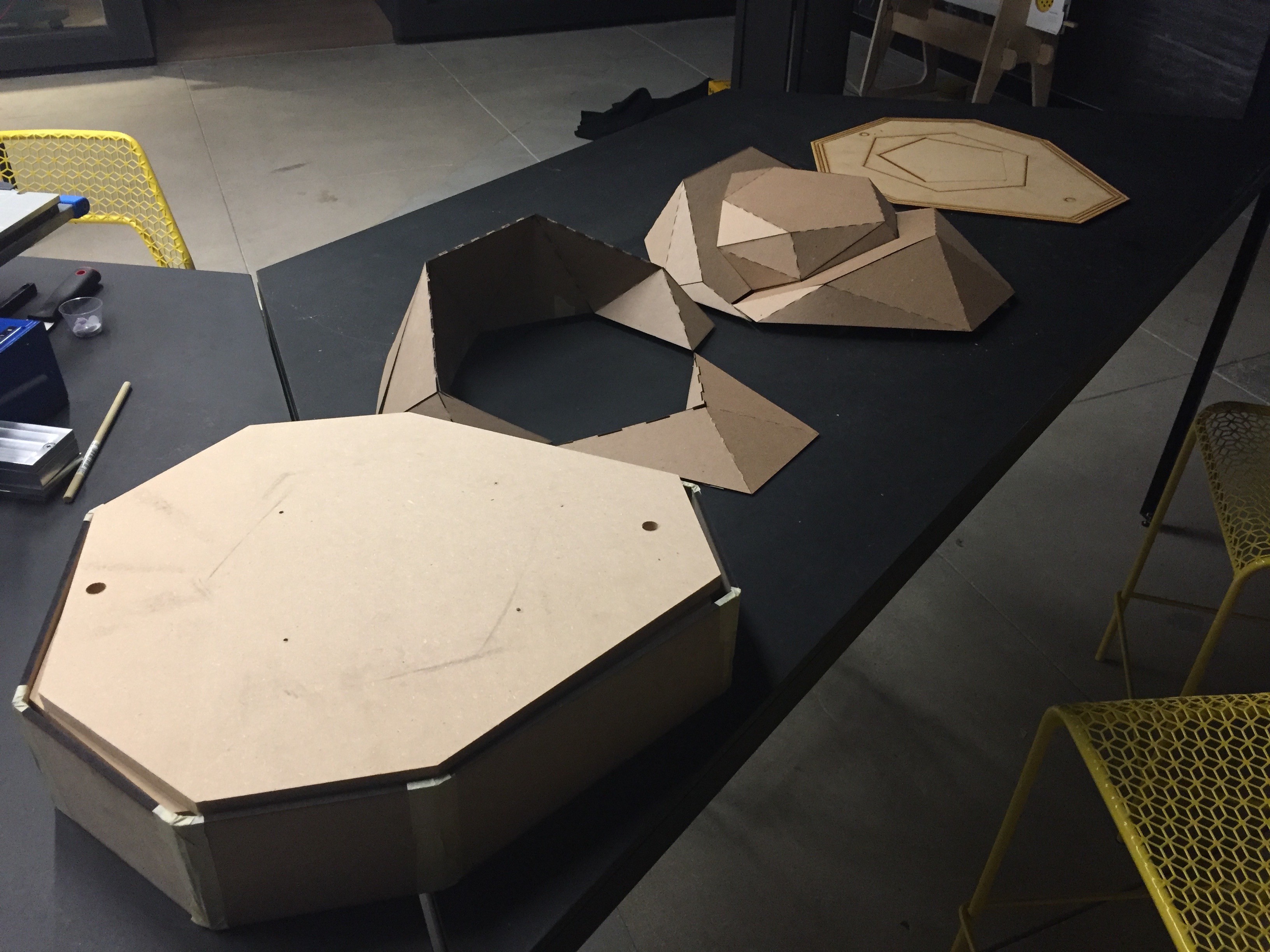 With all the pieces in place it was finally time to bring the shell positive to the vacuum former. In fact, I just dropped it off this morning at a local shop. I was met with a bit of skepticism that it would work, and can already see some areas to be improved from a manufacturing perspective before production. Either way, I left them to be pulled as an experiment. Fingers crossed this was an effective technique.