In this log we aim to cover the importance of sensing breathing and the various ways we can go about and finally the way we have chosen.

Importance of Breathing in mental health:

Respiration has been studied and is used across different time periods and culture to improving health and well being. Pranayama is a breathing exercise followed by practitioners of yoga that originated in ancient India that is a core inspiration behind the project. Zen breathing techniques practiced by Buddhist monks in various asian countries from China to Japan is also a key influence in our work. It is all centered on deepening one's own breathing to enhance mental well being. Several breathing control technique have been used in increasing amounts to prompt self awareness and purge stress. We can even observe the link between emotion regulation and breathing  through common expressions like 'breathtaking' to express suprise to “sigh” to show relief, these feelings transcends cultures and is common across all humans.

Studies have shown that a breathing rate of about 5 to 7 breaths per minute to be of particular merit to alleviate stress. While breathing rate is a good metric for assessing overall stress levels other factors like breathing depth, inspiration time, exhalation time were found to have significant effects in brain function and emotion regulation.

Breathing as an Input:

While many wearables and other devices to promote mindfulness use other physiological parameters like electrodermal activity, heart rate variability or EEG. We think the simple nature of breathing along with our unique ability to control and modulate or breathing makes it as a prime candidate to monitor through the NeuroCuddl system. We are looking to add more sensors (Brain activity:fNIRS & Heart Rate) in this soon but we want to make first revision as minimalist as possible.
This should give some rationale into the importance of monitoring breathing in our usecase.

1. Contact based sensors
In contact based sensors we have Respiration Impedance Plethysmography which uses active electrodes to measure changes in bioimpedence caused during inhalation and exhalation. These methods while being highly accurate are complex and expensive.  Another common contact based sensing techniques is the use of respiration effort belts, We were working on a project earlier called ADITI where we made our own respiration band using peizoresistive fabric sensors. 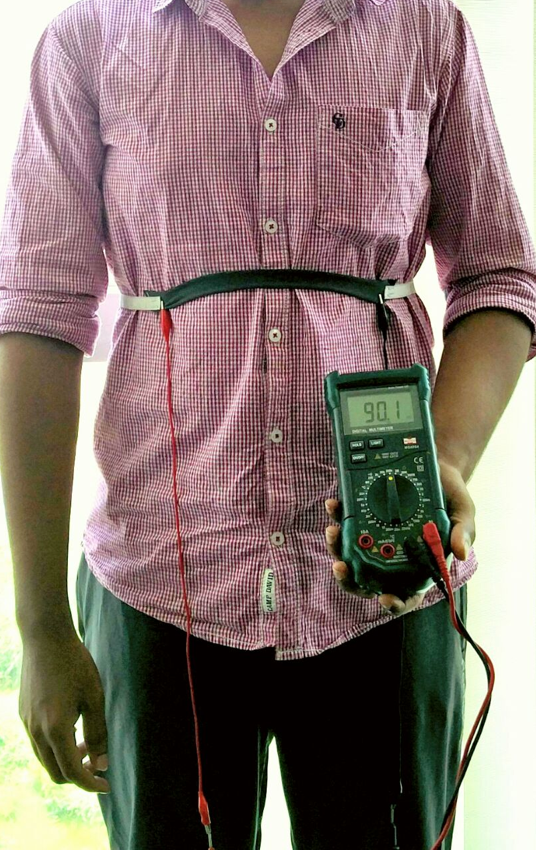 While this approach gave us fantastic results we understand design constraints which come in when integrating this with a VR headset system. This approach still is open though and we would like your feedback on this matter. A similar approach involves using either an accelerometer or IMU to measure breathing.  The standard of care for monitoring respiration in patients is through the use of nasal airflow sensors which can either look at pressure based flowmetry or use a nasal thermistor both of which are often very uncomfortable for monitoring respiration outside a hospital bed setting.
Another interesting method we were exploring to measure breathing involved using piezofilm based sensors to measure acoustic emissions in the neck during the breathing process. We tried this method by using a CM-01b contact microphone coupled to the neck. Due to  some design issues in coupling the sensor to the skin we were unable to get any decent results. Just as we tried to give up a friend informed me about the Masimo RAS acoustic respiration sensor.

I got access to one and found that it too was just a piezo film based sensor, The sensor couples to the neck using cloth tape and picks up the vibrations caused during breathing.

We got one hooked up the scope and tested some patterns while breathing:

The below graph shows the effects of inhalation and exhalation picked up by the sensor. The results are pretty impressive. We wanted to explore this more but I had to return back the sample and due to the status of this being a medical equipment, dealers were none to keen to sell us any. We reluctantly decided to park this idea at the moment and try again when we could make some piezoacoustic sensors of our own.

While all these contact measures were being developed there was a lot of interest from clinicians and people delivering neonatal care to explore noncontact modes of measuring breathing.
Advances in RADAR & Ultrasound in recent years has lead to the development of several RADAR & Ultrasound based approaches to monitor respiration such as Xethru and Raybaby which used this approach. This however involves heavy computation overhead is rather complex for us to implement.