I did some more assembling and programming, and I have a full control of all the eight servos now. With Python. Over w web-based console. How cool is that?

Anyways, I realized that I never talked about the actual connections needed to get this to work, so let's talk about this for a moment. The ESP-12 module that I'm using has 11 GPIO pins available for use, not counting the pins broken out at the bottom of the module, which are used to communicate with the flash memory chip and shouldn't be touched. Micropython lets me do PWM output on 8 of those pins, because it assumes GPIO1 and GPIO3 are used for the serial, and GPIO16 is kinda special case in the code. That is quite lucky, because I need exactly 8 servos to make the pony walk.

However, there is a small problem. Pins GPIO0, GPIO2 and GPIO15 are used to select the boot mode of the board. Connecting a servo to them makes them effectively pulled down -- which is fine for GPIO15, which I want pulled down, but not for GPIO0 and GPIO2, which I want pulled up. Fortunately, the servo will work quite fine with a signal that doesn't quite go all the way to 0, as long as it passes a certain threshold. So I determined experimentally, that pulling those two pins up with 10kΩ resistors makes them pulled up at boot, but still lets them drive the servos.

The resulting schematic below: 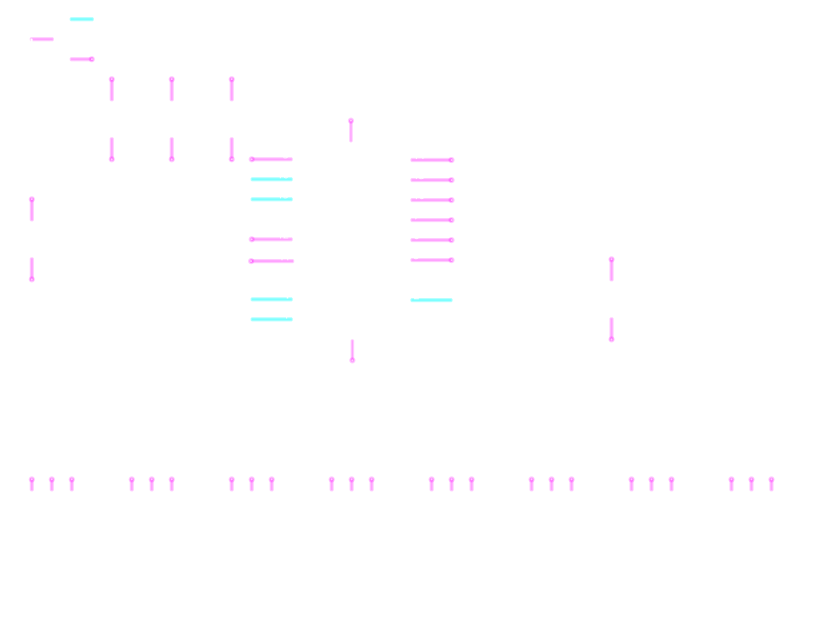 That still leaves the three GPIO pins and one ADC pin for my use. Since Micropython now has web-based REPL console, I can use the serial pins for other things. I would be most happy to use them for driving two of the servos, thus leaving the pulled-up GPIO0 and GPIO2 for I²C communication (they need to be pulled up for that anyways), alas, Micropython doesn't support PWM on those two pins. I also didn't find a way to disable the serial output on the TX pin, so for now the plan is to use the RX and GPIO16 pins for I²C communication with the sensors, and leave the TX pin for debugging. The ADC pin will probably be connected to a voltage divider to monitor the battery voltage.