As time progresses, I (Yann) am turning more toward European sources of vintage transistors. Honestly, I bought the first Germanium transistors (the soviet МП13Б and МП26А) as "double diodes" for the reset signals and only later I thought about using them for switching purposes.

Still, they look like transistors and the performance is not fabulous. I can get away with many quirks but the efforts must be worth it. I want the parts to be and look special, what's the point otherwise ?

So far I think I have enough transistors to start maybe one or two full-scale assemblies, using:

The Telefunken parts look great to design a "numbers processing circuit". I'm not sure what can be done with only 400pc though.

The AC125 are not fast enough for high speed processing but can manage the clock oscillator and prescaler of the clock. Or more. It's germanium-y and can make a nice clock too. The datasheet is pretty complete (if it's really from the same manufacturer). But the OC70 is the thing for this Germanium Clock project, with its totally odd look and antique characteristics, a blast from the late 50s ! 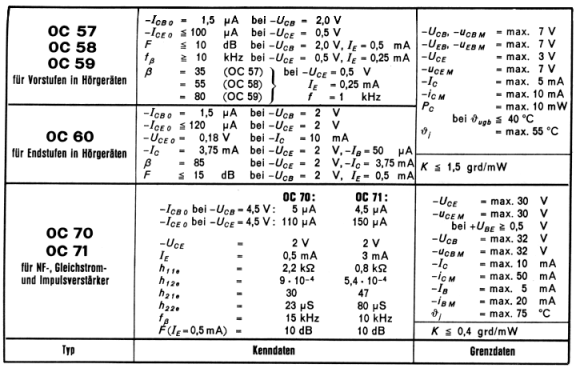 Transition frequency of 15KHz ? Wow that's not fast... So it can only be used for the counter of hundredths of seconds, not closer to the prescaler. I have read somewhere that Mullard's OC70 were used in the first British transistorised computers and digital devices so "it should be ok" and it should suitable for the clock's slow counters.

But the look is just right. If you don't know what it is, you are only left with conjectures: 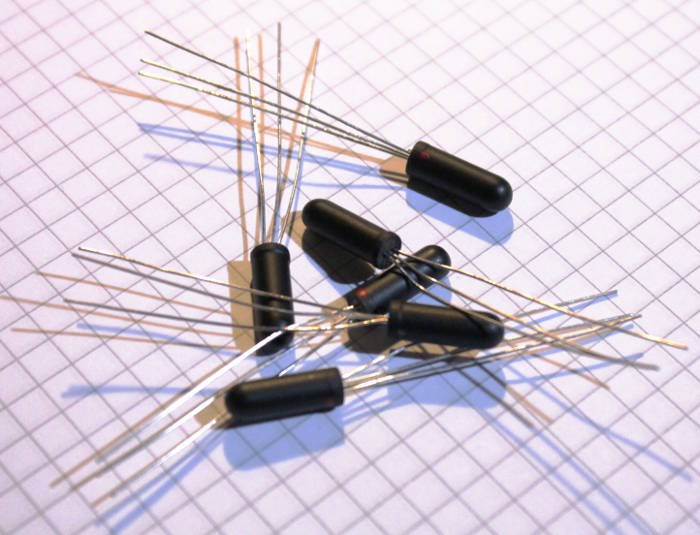 And this is one of my goals for this clock project : it's really a clock but you have to think beyond your habits :-) It's always good to relearn old things...

Now that I have the parts, I can start the design of the elementary blocks : latch and counters. There are about 40 blocks but I don't know how many transistors will be needed. I don't even know who manufactured these or when. I'll have to test them !

Update: A pair of randomly picked OC70 of this batch can run the Xtal oscillator at 8KHz !

I can better appreciate their characteristics : they are "lazy" with just enough gain but low bandwidth. They can be "boosted" by increasing the power supply voltage though. Oscillation can be sustained at 3V but needs double to startup. The dual-stage amplifier circuit works great and it's important to match the sensor's trimmer to the quartz impedance (the trimmer is set at 16.45K). The other pot is used to center the signal/oscillation in the working range (check with the scope if there is no saturation) and you're done.

What is now missing is:

BTW, the quartz emits a faint audible whine at 8KHz even when driven with a nice sinewave. Now I understand why 32KHz was chosen, after the first clocks at 8KHz, it was not just a matter of size. Energy gets dissipated through the vibrations and it's proportional to the size. OTOH the very low frequency quartz are large and have a high inertia, which is hard to get moving first, but better stabilises the operation. Conclusion: lowering the amplitude reduces the losses...