Yesterday was Corpus Christi day and it is a holiday in some parts of Germany. A lot of people use it as a long, five day weekend and taking a day off on Fridays after Corpus Christi day. The long weekend started fine and sunny but was sometimes interrupted with short periods of rain.

So what a good excuse to use those periods to work on DGSN and detect the NOAA weather satellites with our tiny ground stations.

NOAA satellites are a small fleet of weather satellites, that are serve as "weather telefafax machines in space". They optically scan Earth's surface in their polar Low Earth Orbit as some kind of "line scanner" and directly transmit their data to Earthvia radio frequencies. Some of their data is free and not encrypted and you can receive it. The main goal is to provide weather information to ships so that the crew can plan their course according to the weather that is ahead of them. This is a really awesome service by the US. National Oceanic and Atmospheric Administration because everyone can use it.

So did we. What you see below in the image below is the "weather telefax" in the upper waterfall diagram. For visibility it is boxed and zoomed. There are several frequencies used within their allocated frequency band.

For out purpose, we need to have an automatic detection of this signal. So whenever this signal pattern occurs, the ground station algorithm shall detect it. For that, a pattern filtern is applied reducing the noise and emphasizing the parts of the waterfall diagram, that is most likely a signal. 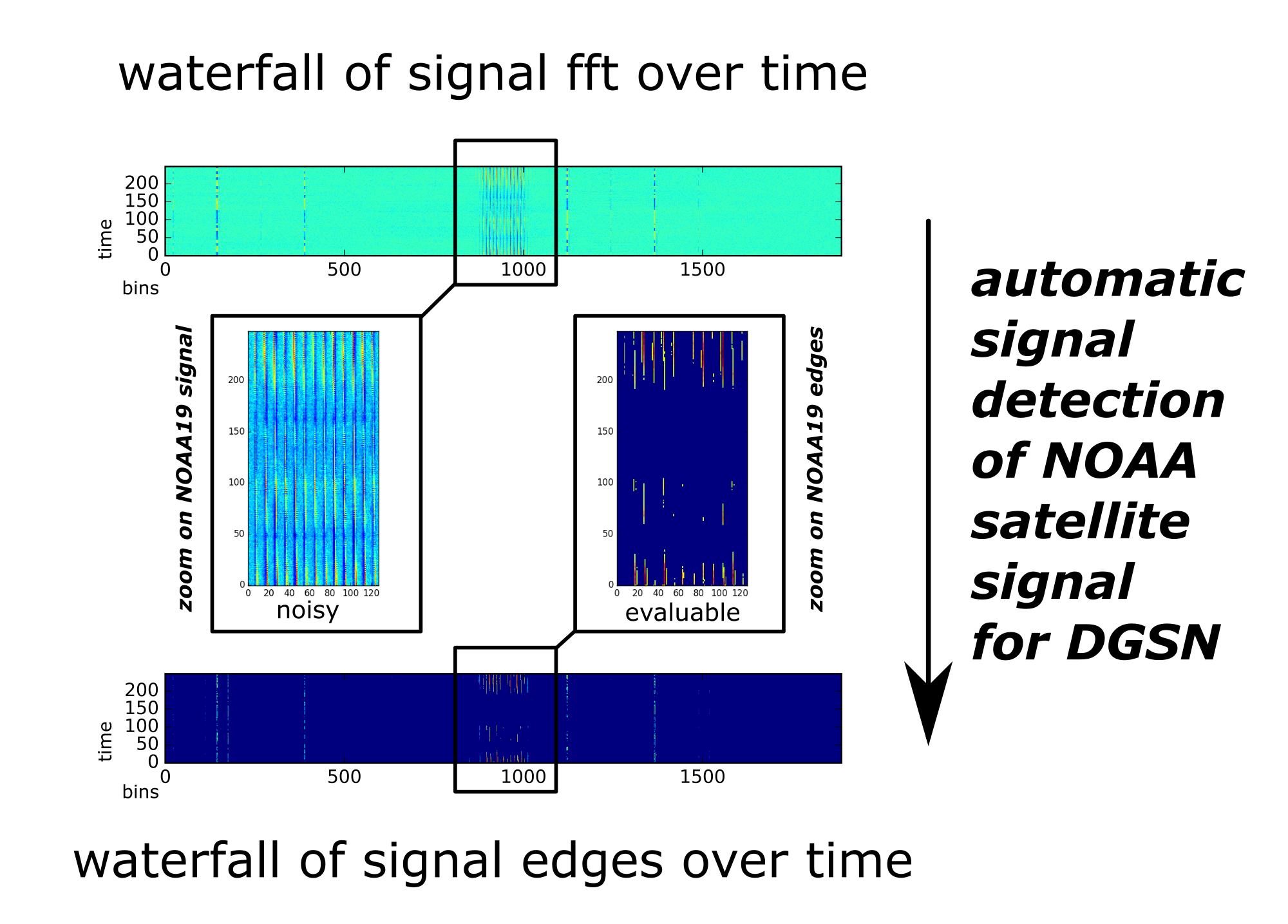 The current test of the detector algorithm was done with NOAA 19 on 137.1 MHz and 80% of the time it was above the DGSN ground station, it evaluated the signal correctly as a NOAA 19 signal.

The algorithm still needs some improvements to detect the NOAA satellites more robustly. But it shows that it is possible with our Python setting to detect it without 3rd party software. This is important to release the code to be used by everyone.

Please stand by for more news....

Just a small update (it doesn't really count as an update)

Wonderful! I am so glad to see NOAA satellite test was good and it will improve soon. Here you can get affordable dissertation writing services to manage quality work easily. I want to know more about such projects related to space so that I can complete my book on space researches. Thanks for sharing.