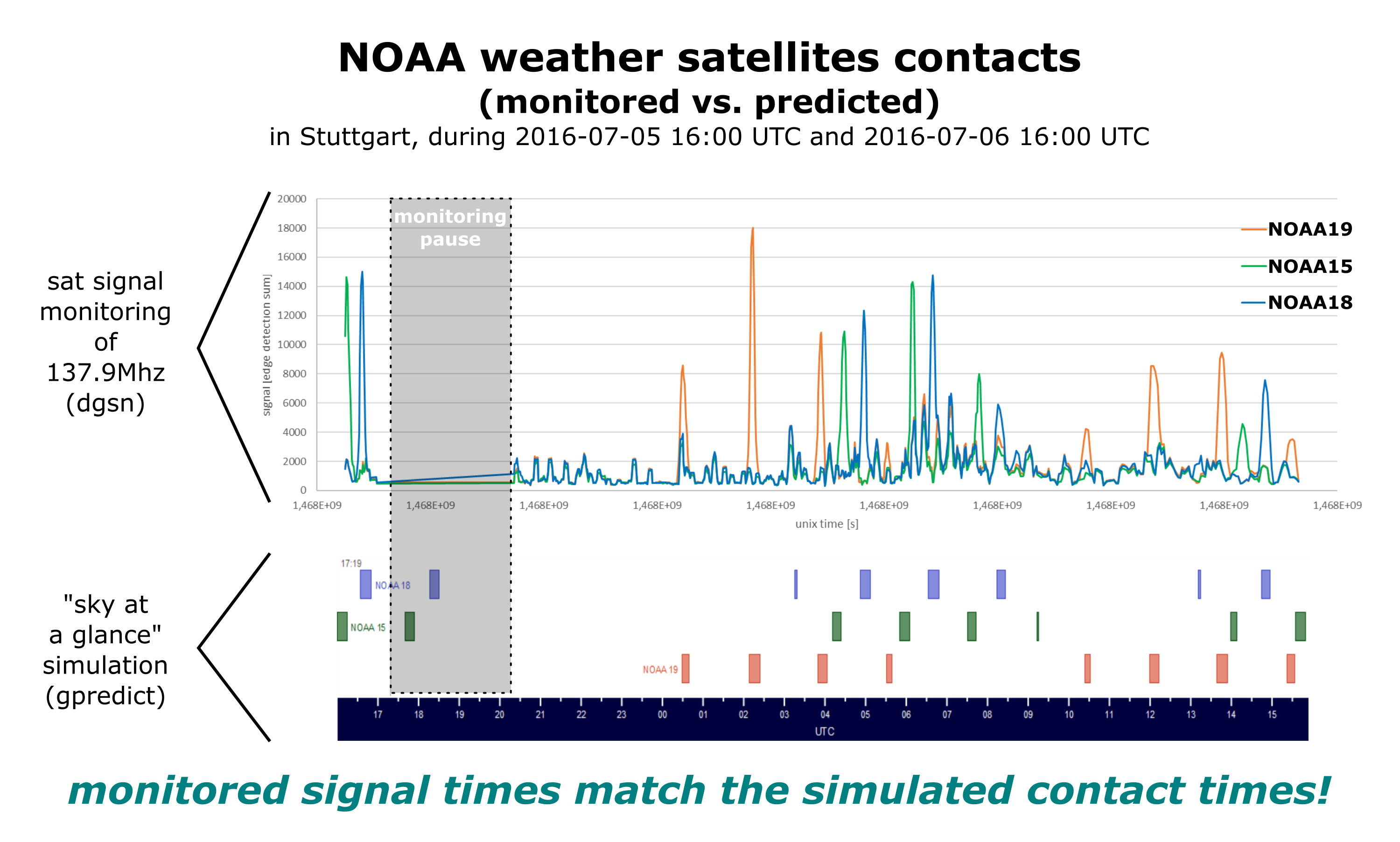 Small baby steps we do with DGSN to achieve to track satellites that are on yet unknown orbits. One of these baby steps we did last week with monitoring the spectrum in the 2m-band. We tried to match the signal intensity with the method mentioned in the previous log to the contact times of a simulation with NORAD orbit data by GPREDICT.

We didn't know what to expect, but we did it! We can hunt NOAAs now! As you can see in the image above, our intensity monitoring (top half) matches pretty well with the predicted contact time by GPREDICT (bottom half). So we're pretty happy as you can guess.

You see several effects in the graph (top half). The spikes are bundled in groups and the middle spikes are higher and wider. This is due to the periodic behaviour of the satellite's orbit and thus the revisit time. In short, the Earth moves a bit in between the revisit times and the satellite seems to shift position each time in relation to the groundstation. So the slant length is changing and ths the signal intensity and the contact time. And you nicely see the different orbits of the NOAAs. There is hardly any gap between groups of contacts. When one NOAA is not visible for 4 hours, the next one takes over. This constellation is designed to be able to deliver an update of the weather map to ships every 100 minutes.


We used a "crappy code" version of our monitoring software that you can find on github. It's not really stable and it's slow as hell on a Raspberry Pi 3. We did some (not representative!) measurements with hardware we had in reach. The same 90 seconds input file were fed to all of them, the Raspberry Pi 3 (Arm), a LattePanda (Intel Atom), an Intel Compute Stick (Intel Atom) and a Surface Pro 3 (Intel Core i3).

As you can see above, the Raspi3 takes 4x as long as the input file is recorded by the RTLSDR dongle. And even with several cores, the Raspi3 cannot compute/process the input files in "realtime". But this is due to the "crappy code" version we used as a proof of concept.

If you like improving and boosting up code, feel free to sent a pull-request. That would be really awesome!

We also don't stop here. Our next goal is to monitor the 2m-band for fainter signals of cubesats and the International Space Station with our LattePanda makerboard. This will be a bit more difficult because unlike the NOAAs those sats don't have such transmission power and are not that strongly at our turnstile antenna. But if it's not working as intended, we will use one of the other, high-gain antennas on our Antenna Forest. And of course we will check the 70cm-band.