We wanted to use an open area near our front door to homeschool our kids, but we wanted a way to visually separate the area without blocking sunlight for our entryway. We built custom shelving 12 feet long, with translucent glass above to allow light through. We also want to have water running down the glass, as well as remote-controlled LED lighting.

The plan is to create a Python application that accepts user input for control of the lighting. The commands will be sent over a network to a Raspberry Pi. The light control data will then be sent wirelessly via nRF24L01 modules to an MSP430 Launchpad at the Waterfall Wall, which will control a strand of WS2812B LEDs. A custom circuit board will enable control of AC power for the water pumps, and 3D Printed parts will be employed as needed.

I also intend to document the plans for shelves themselves, which I've designed for sturdiness, ease of assembly, low material cost, and low material waste.

The Waterfall Wall with LED Illumination encompasses many different domains including electronics, woodworking, programming, plumbing/water management, and 3D modeling/printing. Consequently, it is challenging to capture the comprehensive capabilities and characteristics in a consolidated design document. In recognition of the emphasis Hackaday places on the connected nature of devices, my primary focus will be on the electronics and programming portions of the effort with the hydro-mechanical aspects playing a supporting role.

Below is the design document showing how user input data moves  from a convenient control interface toward changing the state of LEDs and controlling water pumps. It is a perilous journey, taking two hops over the air and ultimately dealing with high voltage (for the AC-powered pumps) and high current (for the LEDs). The "connected device" requirement is met through multiple wired, wireless, and software data transformations (e.g.: User interface -> Python data handling -> Telnet -> 802.11 -> Ethernet -> Python data handling -> SPI -> 2.4GHz wireless of some kind -> SPI -> MSP430 data handling -> WS2812B protocol via SPI) 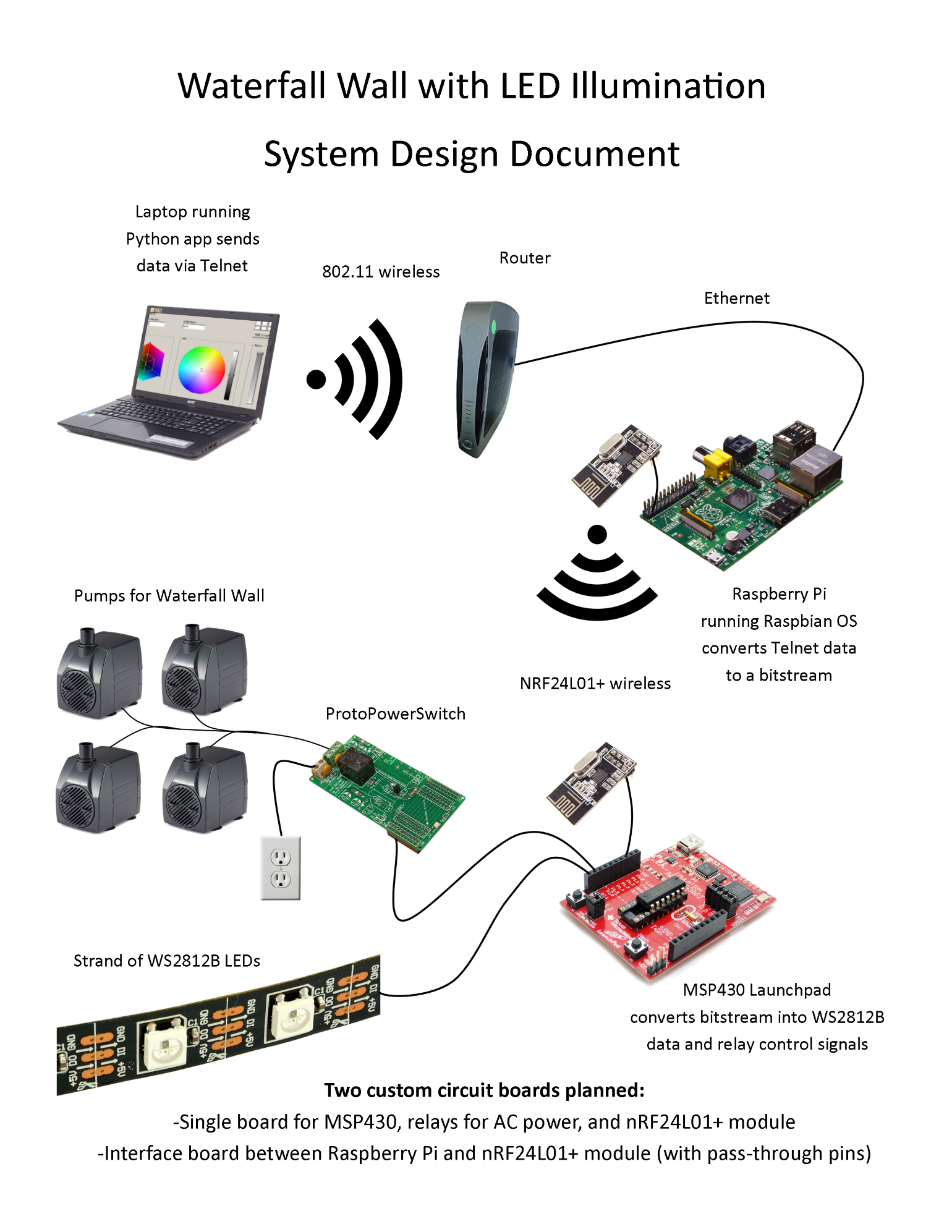 At the moment, the system is very much in a prototype configuration: there are jumper wires going to each nRF24L01+ wireless board, the MSP430 Launchpad is only intended for microcontroller prototyping & development, and the ProtoPowerSwitch board is intended for prototyping and development of circuits interacting with AC mains voltages.

As of 11 August 2014, the main design path has been verified operational; that is, I can use a Python color picker app on my laptop to control the LEDs by sending data along the path shown in the system design document.

The next step will be to design and build circuit boards to get all the capabilities into a much smaller and more product-like package. After the boards are designed and sent out for fabrication, I will have a good opportunity to modify the software codebase (on the laptop, on the Raspberry Pi, and on the MSP430) to improve the capabilities of the final system and make the code more clear/documented/useful to other open source hackers.

This project would not be possible without the support and examples provided by many, many open source contributors:

LED controlling software for MSP430 was derived from GitHub user RoXXoR with no license specified; GitHub T&C includes rights to view and fork.

The color picker Python app is derived from the wyPython cubecolourdialog created by Andrea Gavana, licensed under the wxPython/wxWidgets/wxWindows license

Quick2Wire for the Raspberry Pi is dual licensed under the MIT License and LGPL.

nRF24L01p.py is from GitHub user klalle with no license specified; GitHub T&C includes rights to view and fork.

Mike Szczys wrote 06/09/2014 at 18:58 • point
Hi David, thanks for entering this in The Hackaday Prize. Looks like you already have a great start both on the build and on documenting the project.

I LOL'd about the laundry detergent. Reminds me of a prankster who dumped a bunch of soap in a fountain one day at the University I attended. Turned out like a foam party at Ibiza!

infinityis wrote 06/12/2014 at 04:58 • point
Hi Mike, thanks for the comment. I too have seen soapy fountains while in college; I'm guessing this is a familiar occurence around institutions of higher learning. By the powers of correlation (and optimism), I must therefore surmise that the event has somehow enhanced the homeschool environment.

Official Hackaday Prize Entry
An apparatus to assist in the study and collection of data on the subject of pain.
Project Owner Contributor