Tiny, pill-sized cameras are frequently used in the medical field to visualize the gastrointestinal tract, particularly areas not readily accessible by bulkier devices. Increasingly, consideration is given to using these devices in patients who cannot tolerate, or are otherwise unwilling to undergo, a conventional colonoscopy. The possibility of displacing or augmenting these methods with tiny, non-invasive devices is very exciting.

Unfortunately, pill cameras can be very expensive, costing hundreds of dollars for what is effectively (sure, just wash it off!) a one-time-use device. These devices also inevitably involve closed-source hardware/software and sophisticated manufacturing not available to the average person.

The challenge of this project is to build and prototype an open single-camera pill-sized capsule camera usable for medical applications. The design will also be sufficiently modular and adaptable to accommodate other space-constrained applications. 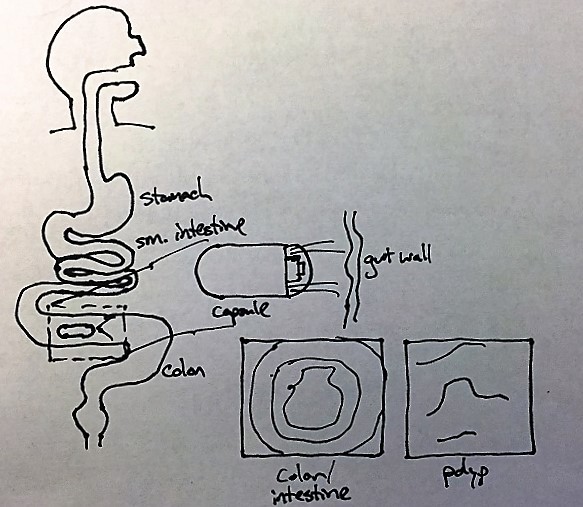 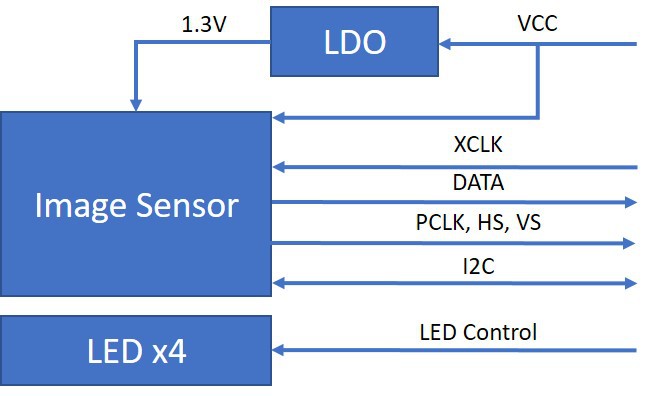 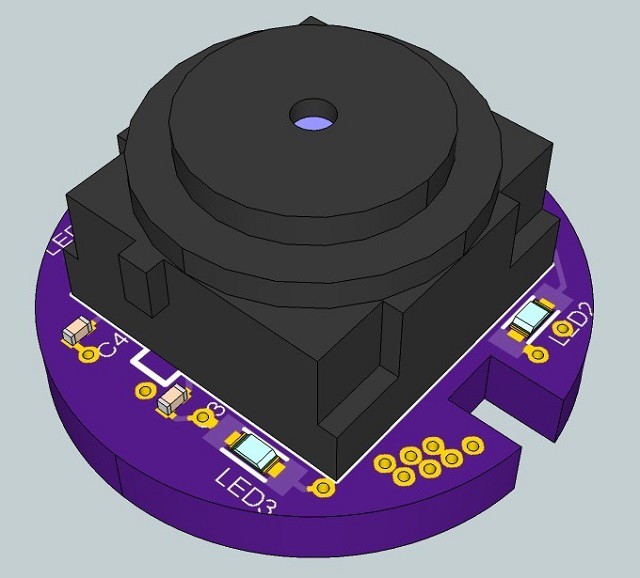 The OV2640 accepts a minimum pixel clock of 6MHz (nominal 24MHz), provided by the system processor. The camera data electrical interface is 8-bit parallel, configurable as YUV, RGB, or RAW. The datasheet also mentions JPEG compression as an option, though this does not seem well-documented....

I think this project is dead now, it's sad as it was a good one.:)

Is this project dead? I would love to try one of these.

How is the capsule endoscopy project progressing? Can you demo it?

Is this project dead now?

Progress has been slow for several months due to moving and starting a new job. I plan to regroup around the holidays. Stay tuned!. Thank you for your interest.

Thanks you very much !

This project is awesome .

Hi, Is there any update on this project

Hi Pal - Updates are coming soon! I've been working on several things this month that I have not yet had time to document. Thanks again for following!

Thx for the update

I agree that using the DCMI would be easier. However, I have not seen a DCMI-capable controller in a package suitable to my needs - preferably a QFN 8x8 or smaller. There are BGA and chip-scale packages that would work, but I'm trying to use inexpensive PCBs and ball pitch that small would not work.

Good luck for your project !

Cool, I'll give that a try. I suspect the problem could also be a bad solder joint somewhere as the behavior improved somewhat after I re-heated a few areas.

The most challenging and key aspects of the project are definitely 1) battery and integration of accelerometer - the first has to be safe for humans (at list for a while...) and the second is absolutely needed to locate seen-things, otherwise it is not useful for medical goals. I'm very interested to. Let me know if ever you'll sell (cheap) prototypes.

Great project. I wonder: Does someone has any information about how to operate the parallel camera interface on the teensy, or how is the camera read out? Would be an interesting read. :)

Thanks! One of the best starting references I found for getting a basic camera interface on the teensy was actually the following post in the teensy forums:

Thanks a lot. :) Looks simple. Do you have an idea what performance could be archived with the OV2640 and higher XCLK?

Inspiring project. May the force be with you!!!

BTW, quick question: Did you do any worst case calculations for current draw to see how the silver oxide cell will accommodate for periods of high drain or during low BATT levels? I know for a fact that these Li-ion 3V button cells have high output resistance, which in turn, limits a board's capability to maintain stable rails during high current transients, e.g. during Tx/Rx operations on NRF modules.

I agree that this is another challenging aspect of the project - these batteries are really best suited to constant small currents rather than large transient loads. I estimate peak transient to be about 20mA-50mA based on initial camera tests. The battery will actually be a silver oxide chemistry (nominal 1.55V) with a boost regulator to 2.8V to run most components on the board. A previous project of mine used one of these cells with intermittent current bursts to around 50mA without any problems.

Still, I have some more calculations and testing to do. A test version of the battery/power module PCB actually just shipped today. I will try to post an update when I get that far.

Are you sure STM32F411CE has a parallel camera interface? This mcu is noted in the components section of your project.

As far as I have just checked, it doesn't.  But maybe I'm the one mistaken though. Please check.

It does not have a native camera interface. Still, that shouldn't preclude from operating the camera.

Edit: the F2 series appears to have native camera interface. However, none of the package options I see seem favorable to my size requirements for this project. I'm certainly open to suggestions because native interface would be more convenient from a software design standpoint. For now I may just have to continue with the plan to implement a camera interface through regular GPIO.

also by adding an accelerometer it's possible to track pill position on body. by the way you have to give high priority to casing. due to battery, it will be fatal if got a leak.

It's true that the casing needs to be good. Batteries can potentially cause burns and their contents are not necessarily something you want to digest. That being said, silver-oxide and lithium batteries are commonly used in medical implants. It's my understanding that the newer formulations of the silver oxide batteries contain little-to-no mercury these days. Still it's not something you want free in the body.

An accelerometer and other sensors would be fun to include - I don't know if this will physically fit in the current implementation. It would be interesting to see just how accurate (or not) dead reckoning would be given the long time window and the very small movements of the GI tract compared to the large movements of the body as a whole.

in these days people talks a lot about cyber-implants. same design can be implemented to unused organs such as cecum (blind gut) by medical surgery. and can be charged by wireless chargers.

Very nice project. Is a wireless image state-of-the-art for gastrointestinal imaging? I thought they were reading out the values afterwards since the body absorbs a lot of the wireless signal...

are you planning to produce and assemble the boards yourself?

Have you already plans for the see-through part of the body?

It may or may not be state of the art for pill cameras. There are a number of things the experimental or top-of-the-line systems do that I don't plan do attempt at this time. For instance, one type has a camera that spins inside a magnetic field for 360 degree views. Some models also use percutaneous power (electrodes attached to the skin) to send power (and communications?) to the device. There are radio SoCs that utilize the WMTS band and theoretically experience less interference from the body (essentially a big sack of water) than the 2.4GHz bands. Unfortunately, these devices are not easy to find or buy. Still, I propose to transmit only over a few feet so it's possible that it'll still work inside the body.

The plan is to do assembly myself - none of the components so far seem unreasonable to do myself.
I'm still pondering how to address the clear 'lens' end of the body.

A simple breakout board for the FLIR Lepton LWIR Camera module specifically giving access to the SPI and I2C pins.
Project Owner Contributor

This is a Breakout board for the Lepton Thermal Camera Module.
Project Owner Contributor