How can I make a low-frequency oscillator with a relay (or more ?)

A project log for SPDT16: 16-bits arithmetic unit with relays

The multiply/divide mode of operation will require a multi-cycles sequence, hence some scheduling. I think I know how to make the logic part but... where does it get the synchronisation signals from ?

In the quare-root relay calculator, the sequences are generated with an electric motor and a cam. I don't want this. My best bet so far is a ring oscillator (3 relays?) with very large capacitors (I got that in stock, 15000µF is easy to find anyway).

Start/stop is as easy as inserting a SPDT in the ring to stick one coil to 0V for example. Once the start pulse is sent, this relay should be latched and the ring starts to oscillate. The "end condition" will release the control relay which will open the ring.

Yes I know, I should have googled that question before posting here. Shame on me.

Only one relay is necessary but a large capacitor is needed (2200µF?) and I'll need other relays (in series with the output ?) to drive the bunch of other coils to control.

I'm so lazy to make the diagrams though :-/

This "relaxation" version short-circuits its own coil, bad idea. But it gives me another idea ;-) 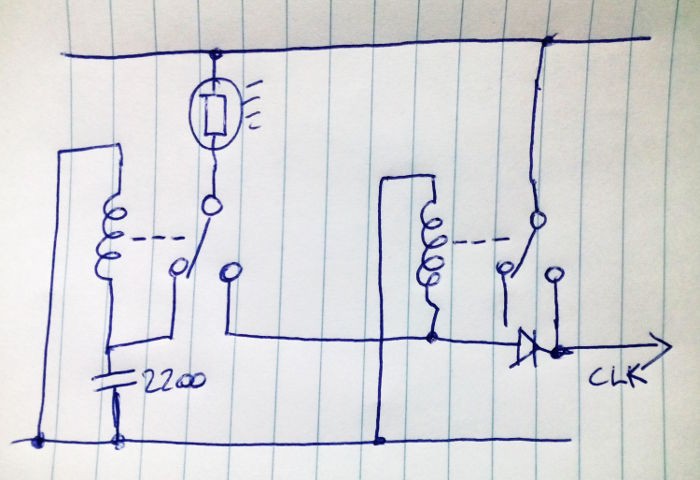 Now, the trick of reinjecting spikes in other coils gets... interesting. Is it going to be a new sport/puzzle/game of this project ? :-)

The relays are here too !

I made it! without any fake load!

It's only require 2 relays, 1 resistor,1 capacitor and an optocoupler...

How about a PC fan motor with rear-earth magnets on the blades, spinning under a reed switch? :)

one relay, connect its coil through its Normally-Closed contacts == fun for the whole family and schoolyard, and an oscillator as well :)

yep, that's the consensus I have found on the web :-D And this is what I have figured out with the above drawing.

Working with one technology makes you close-minded, I have been working with MOSFET, thus doing a ring oscillator sounded obvious...