In the previous log I was pretty happy with my transformer power supply. Then I realized that at full load the voltage out dropped too much. I would like to keep the output at 170VDC.

So, I wanted to find a regulated high-voltage power supply. First I designed a boost converter that takes 12VDC in and yields 170VDC out. It might work, I just need the parts to come in. The problem with such high voltage ratios is that they lead to a slow charge time for the inductor, followed by a very fast drain into the output capacitor. So it requires high-quality high-speed low-ESR parts.

Apparently you can use a transformer instead of an inductor, but I hate transformers because I don't know how to wind my own (I really should learn, though), and almost inevitably the specs I need aren't anywhere to be found.

In the meantime, I found a Chinese manufacturer on ebay that makes 12VDC in to 100-250VDC out, 70W open-frame supplies. It looks like a plain old boost converter with a big transformer. The chip, predictably, has its top dremeled off so that we can't see what it is, but of course it's going to be an 8-pin dc/dc converter chip, so it doesn't really matter what it is. 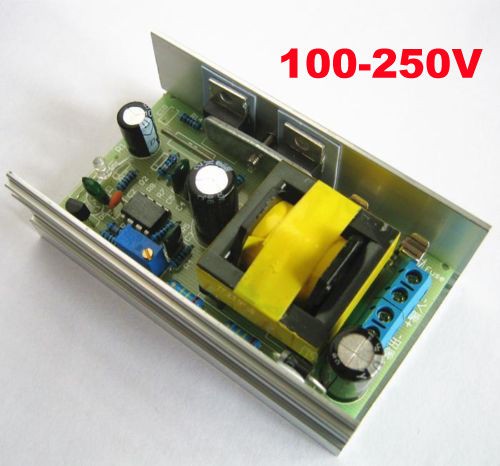 I bought two. One for testing and one for tearing apart to reverse engineer and post here. If it works, great. If it doesn't, oh well, it was only USD 12.50.

The power supply is arriving via ePacket from China. This is basically a free shipping thing that the US and China has going. But it takes a while, like up to three weeks. I've had better shipping times, though, since I'm on the west coast of the US. So hopefully I'll have this soon.

You don't need a transformer for boosting to 170V.  There are tapped boost converter variant that gives you a boost ratio. It is a lot easier to modify an Inductor of the right rating than designing from scratch.  Simply unwind it and make a connection at the right number of turns.  Or you can simply live with the duty cycles as 170V isn't that high a ratio.

On the replacement Nixie power supply I designed, I needed to generate a +80V and a +160V outputs to get around the voltage rating on the driver circuit (which are only rated for 80V).  I used a converter with a voltage doubler to get the two voltages.  So the boost supply only needed to generate 80V.

Well, it seemed like getting a little bit of power at 170V was no big deal. But more power than that seemed problematic. Maybe all I need to do is beef up the components and I'm done. I hope that's the case.

I think I saw somewhere that when you use a doubler on the output, you halve your current capability, so essentially I'd need to double the current. That's something to think about. I definitely need to do another log with my calculations to see if I'm just crazy or if it's workable.

I have seen cheap car inverters actually uses a non-isolated boost converter with an inductor to get to the high voltage before chopping it into AC.  They work in similar voltages and ratios as what you are doing.

It also need a good design to get good efficiency - just using bigger MOSFET is not the right answer.  It takes a bit of designing and simulation work to do a 50W boost converter as you'll need a proper MOSFET gate driver and a higher frequency.

Buying one is easy enough, so that's a reasonably good solution.