Starts April 25th - Ends May 30th / You’re an independent thinker, a troublemaker, and have no respect for the status quo.

Low temperature co-fired ceramics (LTCC) is a well established technology for making many of the electronic components we use today. Ceramic capacitors and resistors for instance may be made using LTCC technologies.

The LTCC process of constructing a PCB is remarkably straight forward and cost effective. A flexible sheet made of alumina and glass powders held together with a binder are (1) first drilled and blanked using a CO2 laser, the vias from the drilling process are backfilled (2) with silver ink using either a screen or inkjet printer. The conductor traces are layed down (3). The various layers are then (4) stacked, pressed together (5) using a hydraulic press, and then (6) fired in a furnace. The result is a very hard ceramic substrate, with virtually perfect electrical properties extending well into the microwave, inert to water, high thermal conductivity, and extremely high dielectric strength exceeding many KV/mm with great solderability and wire bonding properties.

The DIY Space Grade PCB is the first of 5 projects that comprise my entry to the 2016 Hackaday Prize. The ultimate goal for this very involved project is to demonstrate my solution to one of the most difficult problems in all of engineering, that of producing a fully functional and field operational Neural Interposer, Gibson's Cyberspace Deck, aka Brain Machine Interface, not surprisingly it also makes a very capable device for Molecular Biology.

Frequently I find that the problems I like to work on require very complex PCBs with buried and hidden vias and even vias in pads. With vias in pads comes 3 mil lines. Just for fun lets make it a 12 layer board. To find a manufacture of such a board my choices are now reduced from hundreds perhaps thousands of board shops around the world to a countable handful. The cost of a single prototype went from a few $ per square inch to many hundreds of $. I could expect to pay several thousand $ for just a few boards with a lead time of several weeks. Well, one thing is certain, I'm not going to pay a board shop thousands of $ for something I can do myself!

OK, if it's so great why isn't it used more often? The answer is shrinkage. When ceramics are fired there dimensions change. There are ways to keep the shrinkage under control but they are uneconomical and expensive in volume so typically 99.9999% of the time FR4 will do.

At least for now, I'm content to know that the technology of LTCC can provide the boards I need. I don't expect to get to the highest levels of performance immediately, but I know they are obtainable. That's why it's called the art of the hack.

The ability to fabricate circuitry with high tolerance is limited by the precision of the mechanical components of the system, the stiffness of the structures, vibration control, step size of the stepper motors, pitch of the screws, and many 2nd order effects.

To reach the goal of producing multilayer PCBs it's first necessary to place vias in the material, deposit ink within the holes, and lay down as many layers of silver ink as necessary to reach the desired conductivity.

Rather than use multiple machines for these operations I've elected to build one machine. I call it a 3-D fabricator.

My 3-D Fabricator is a big project. It sucks up money, time, and resources like a black hole. I even remodelled a room in the house just to hold it. 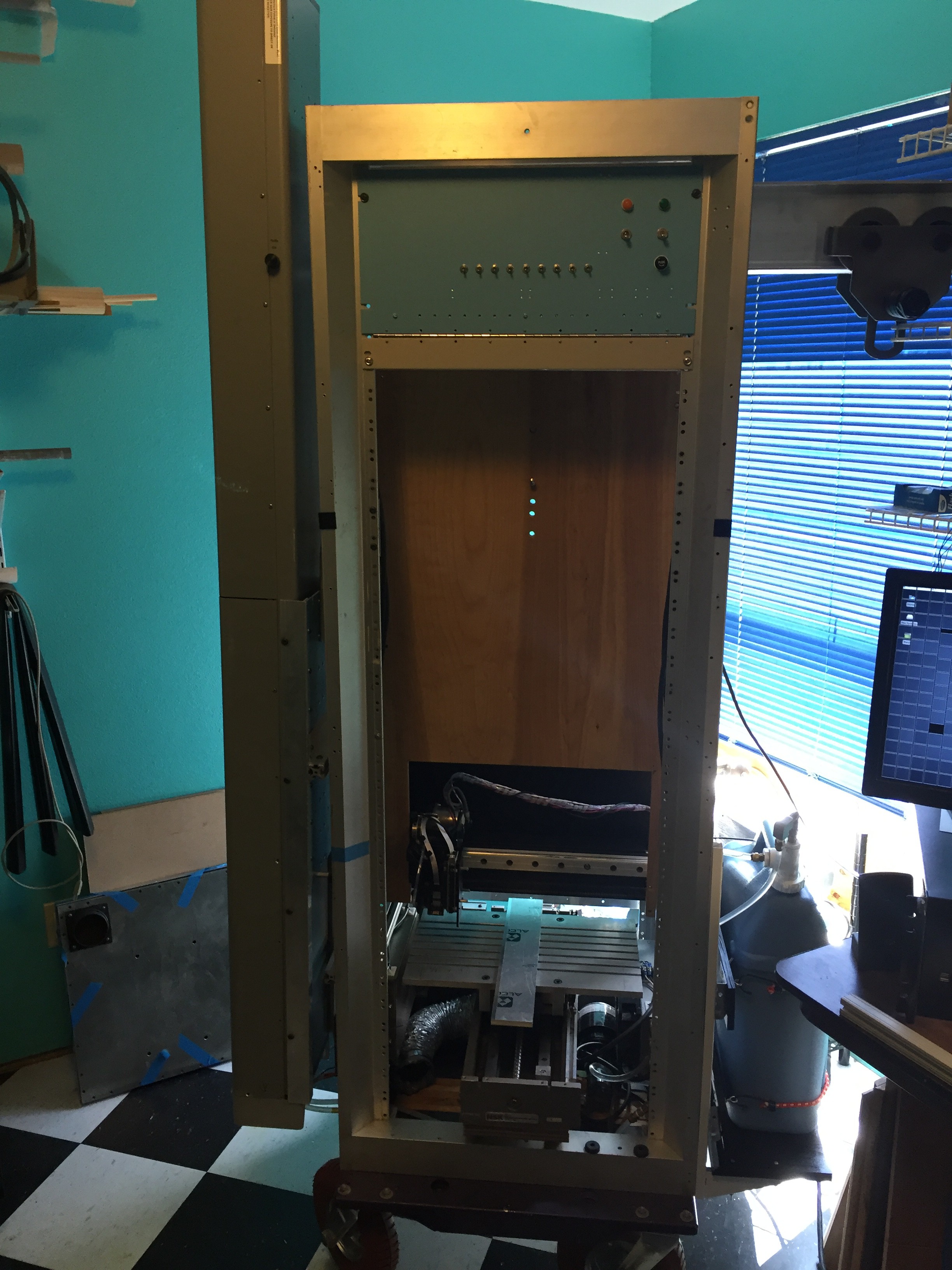 Except for the instrument rack that I've had for decades the other major pieces of hardware, like the laser on the left side and the X and Y traverses have all come from EBay. Just below the slotted bed on the left you can see an air exhaust hose and on the right, a water pump and radiator for cooling the laser, the blue container is the water reservoir for the cooling system. Just above the slotted bed is the X axis traverse with a multifunction tool head that has a laser focus assembly, and ink jet printer head, camera and Z axis traverse along with an Arduino and a BeagleBone Black. This assembly is called the short bed. The plywood above that is a mechanical mock-up that duplicates the basic mechanical dimensions of the "long bed" that weighs several hundred pounds. 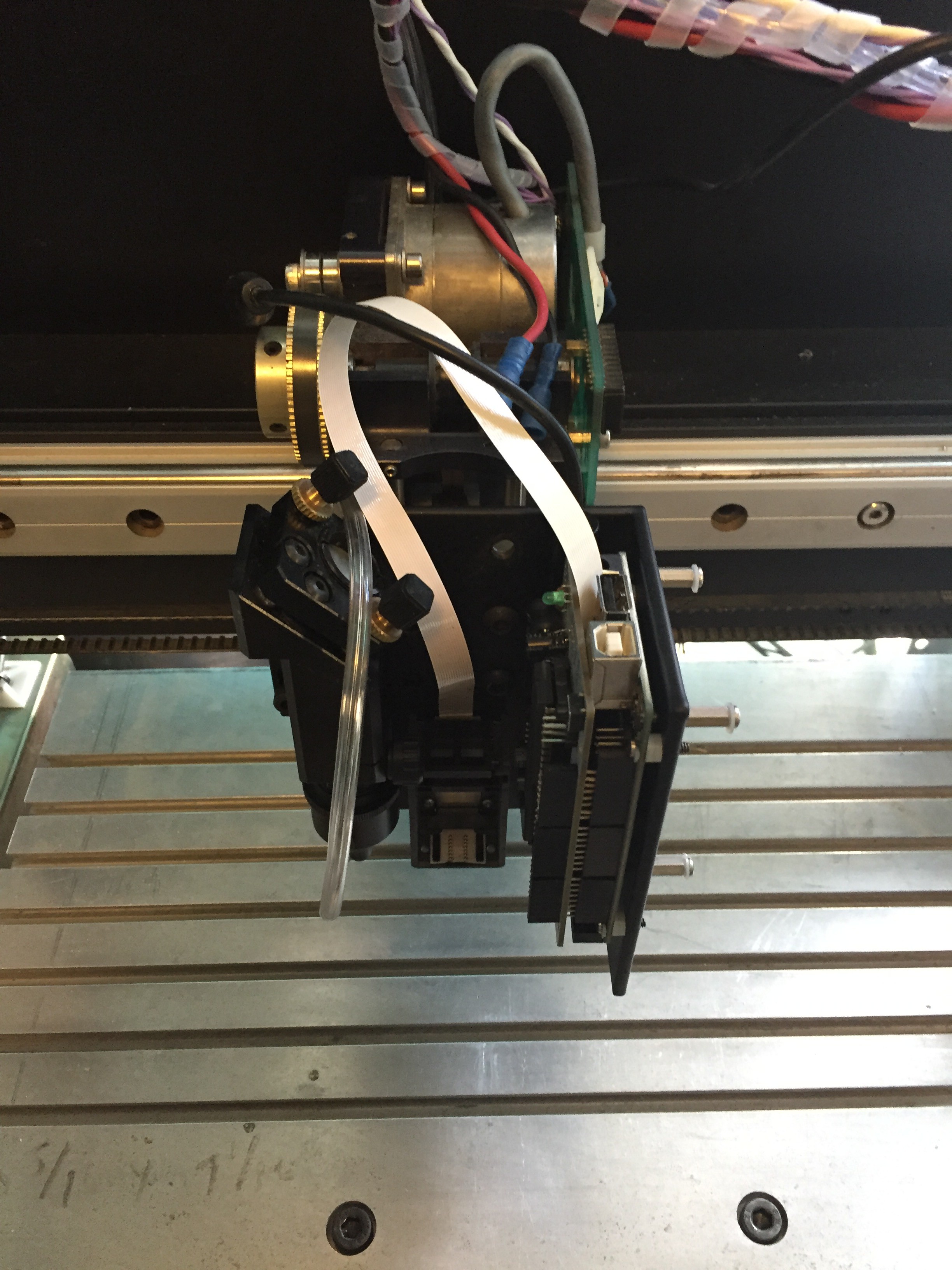 A closer view of the laser/printer head. The plastic hose supplies a constant source of air or an inert gas for protecting the optics. In the center is the print head assembly and further to the right the camera hidden from view along with the Arduino. The Beaglebone Black is dismounted. 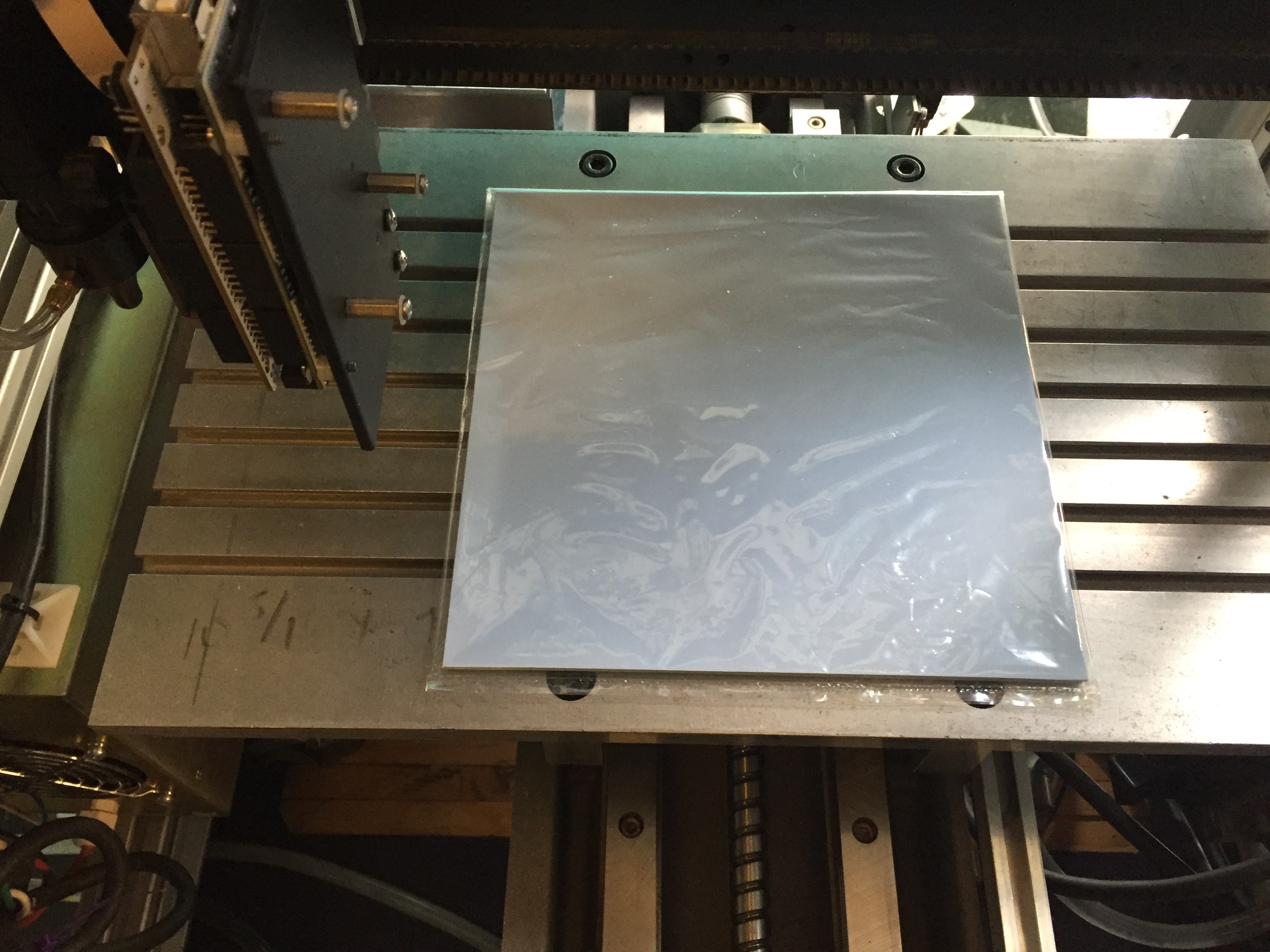 For illustrating scale, here is a stack of "green tape", the ceramic material of interest. The material is from Hereaus. Each sheet costs about a dollar per square inch. The ink comes from ElectronInks. This is the working end of the laser articulation. It takes 8 mirrors to get the beam down to the work. The assemly to the left is another stepper that controls the Z-axis elevation of the laser so that it tracks the z-position of the main tool head located on the short bed. 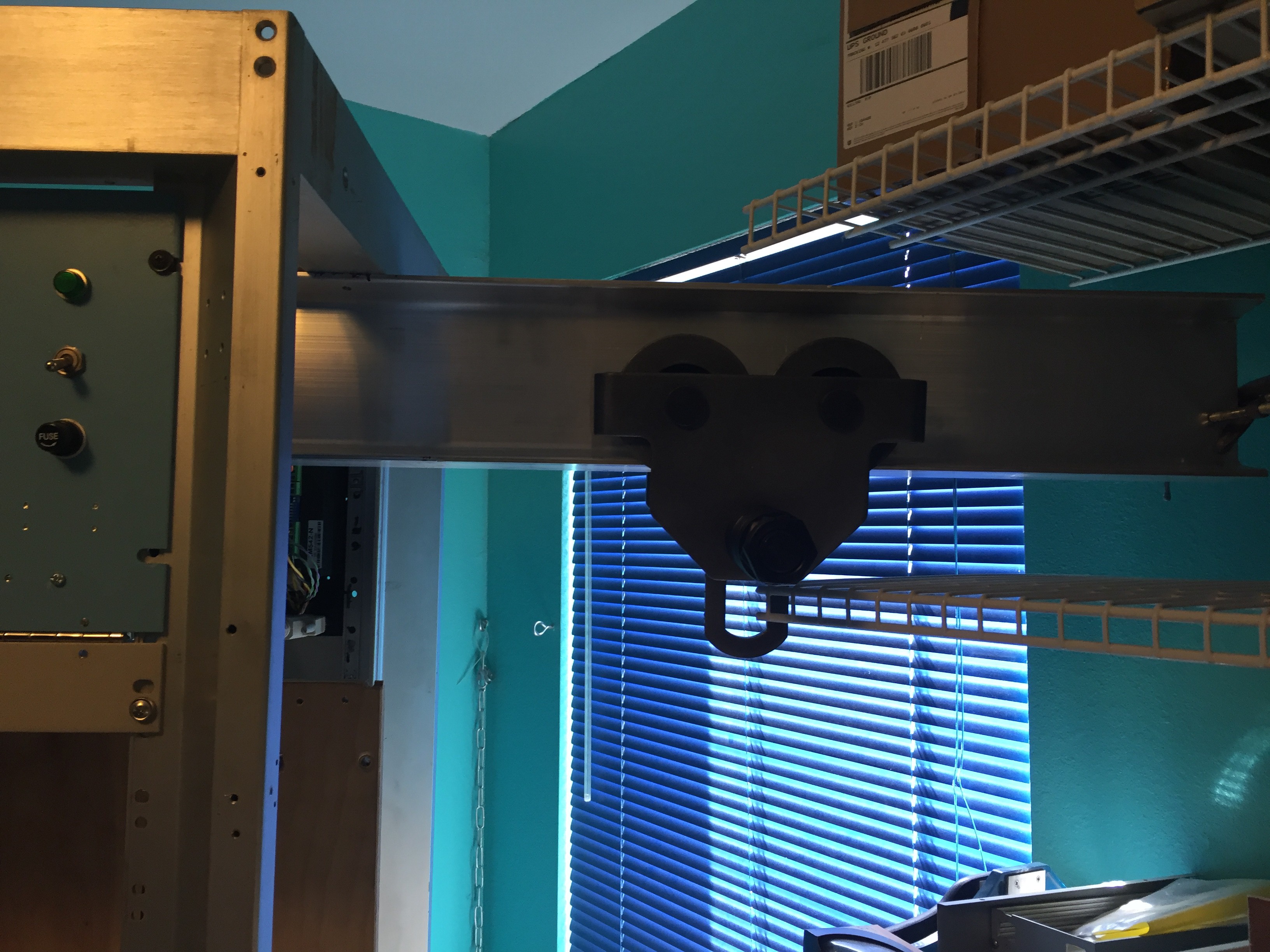 This machine is so big that it...

Wow this project sounds really advanced. Were there any more updates to this?

As you might imagine, there seem to be a limitless number of details to describe and discuss. I'll try not to miss any!

I too am very interested to see this!  Any new way for DIY fab'ing of PCB's is an important addition to the home workshops.

You Sir have my total and undivided attention! Please document as much as you can. This kind of setups mean a giant leap foward for advanced DIYers and hackerspaces.

Thank you for doing this!

The 2016 Hackaday Prize
Most CNC machines are limited to one tool. This machine has a laser, camera, inkjet printer, mill, plastic FDM, fluid FDM, and many more.
Project Owner Contributor

The 2018 Hackaday Prize
Building all the tools neccesary to make chips at home.
Project Owner Contributor