All I can say is "WOW"! The past week has been one of the most difficult of my life, and if I had the chance I would do it again in a heartbeat. Last Wednesday I drove up to Oklahoma and competed in the Icarus X race and WON! The race is a cross country powered paraglider race where pilots must complete the course completely unassisted. After attending the race briefing on Wednesday, 6 other pilots and myself took off from Arkoma Oklahoma Thursday morning on a trip that what would become a defining moment in our lives. Before takeoff, I attached a Polymorphic Dot to my wing to provide me with flight instrumentation. As soon as I got in the air it was clear I had hit a home run. As I climbed the altimeter needle sprung to life and as I turned I could see my bank angle on the attitude indicator changing. It was incredible to see the hardware I had worked on so hard the past few months come together and have a real function.

Shortly after takeoff, however, it became clear this race was no joke. I normally fly down in Texas where there is no terrain and the weather is typically good. Oklahoma was quite a bit different. Instead of flat open land, I was flying over ridges and thousand foot tall mountains. The weather was something else too. Ceilings were capped at about 2000 feet by a layer of clouds, winds were blowing extremely strong out of the south, and we were surrounded by thunderstorms. As I tried to go over the terrain, I encountered down drafts that caused near crashes on several occasions. When I was able to gain some altitude, I would be tossed around like a sack of potatoes due to the turbulence. It was on the first leg I realized I wouldn't be able to safely take video footage of the Dot in action. I had to devote all my attention to flying in order to not die. In the coming week, I plan to get up in the air again (in more calm conditions) and get some video of the device and app in action.

The race itself was incredible. I flew from Akoma to Poteau where I landed at an airport to get fuel. It was pretty cool walking up to an aviation gas pump with my aircraft on my back. I even got to make friends with the airport's guard dog! 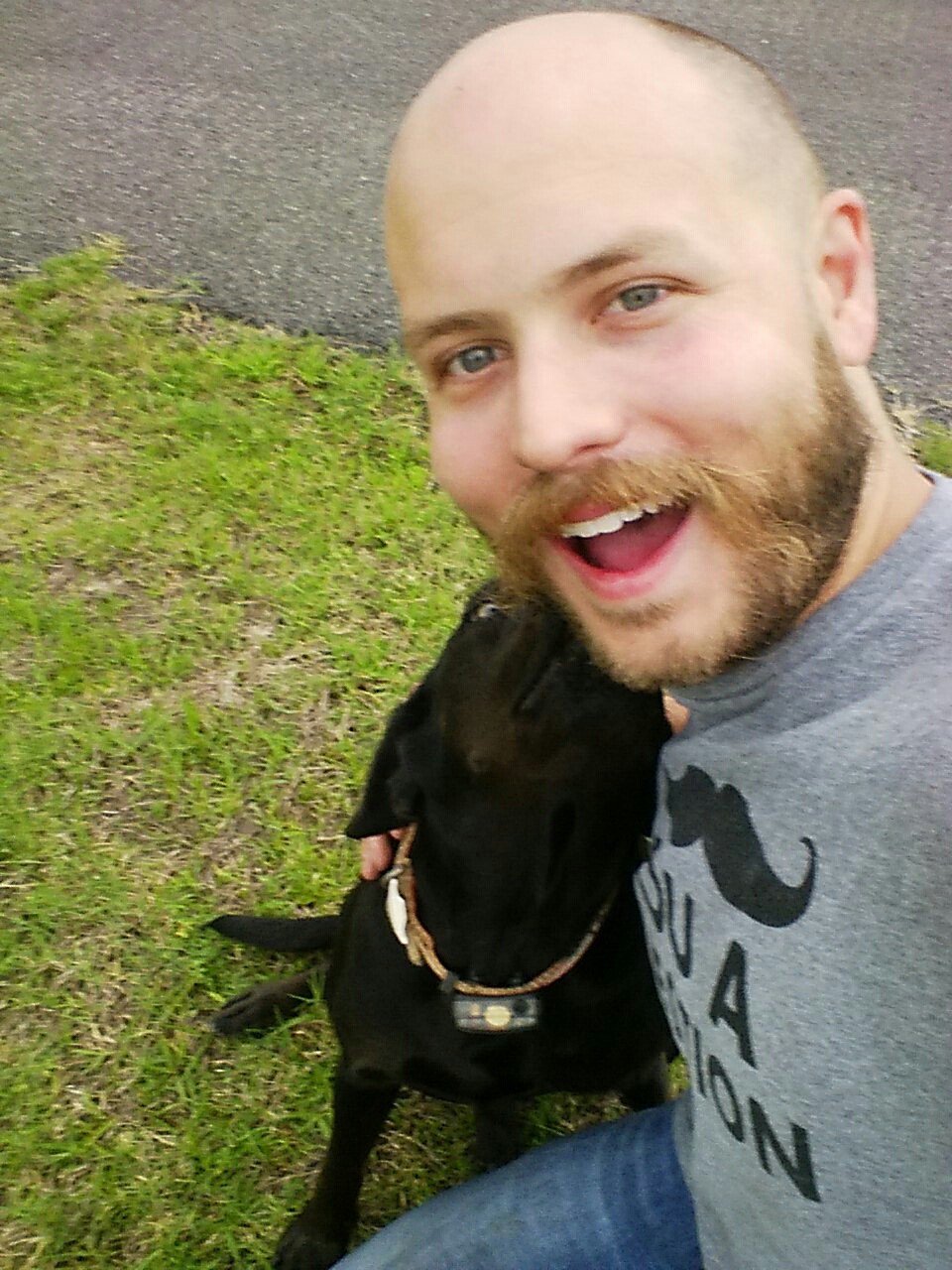 After Poteau, I was supposed to cross the most dangerous terrain of the race in order to get to the town of Talihina. During this leg, I was getting thrown around much more than the last as well as having partial collapses of my wing due to the turbulence. Just before crossing the mountains, myself and two other pilots elected to land in order to check the weather and make a go/no go call. After landing and making friends with the locals, we decided the conditions were just too strong to make a safe cross and elected to skip that checkpoint. 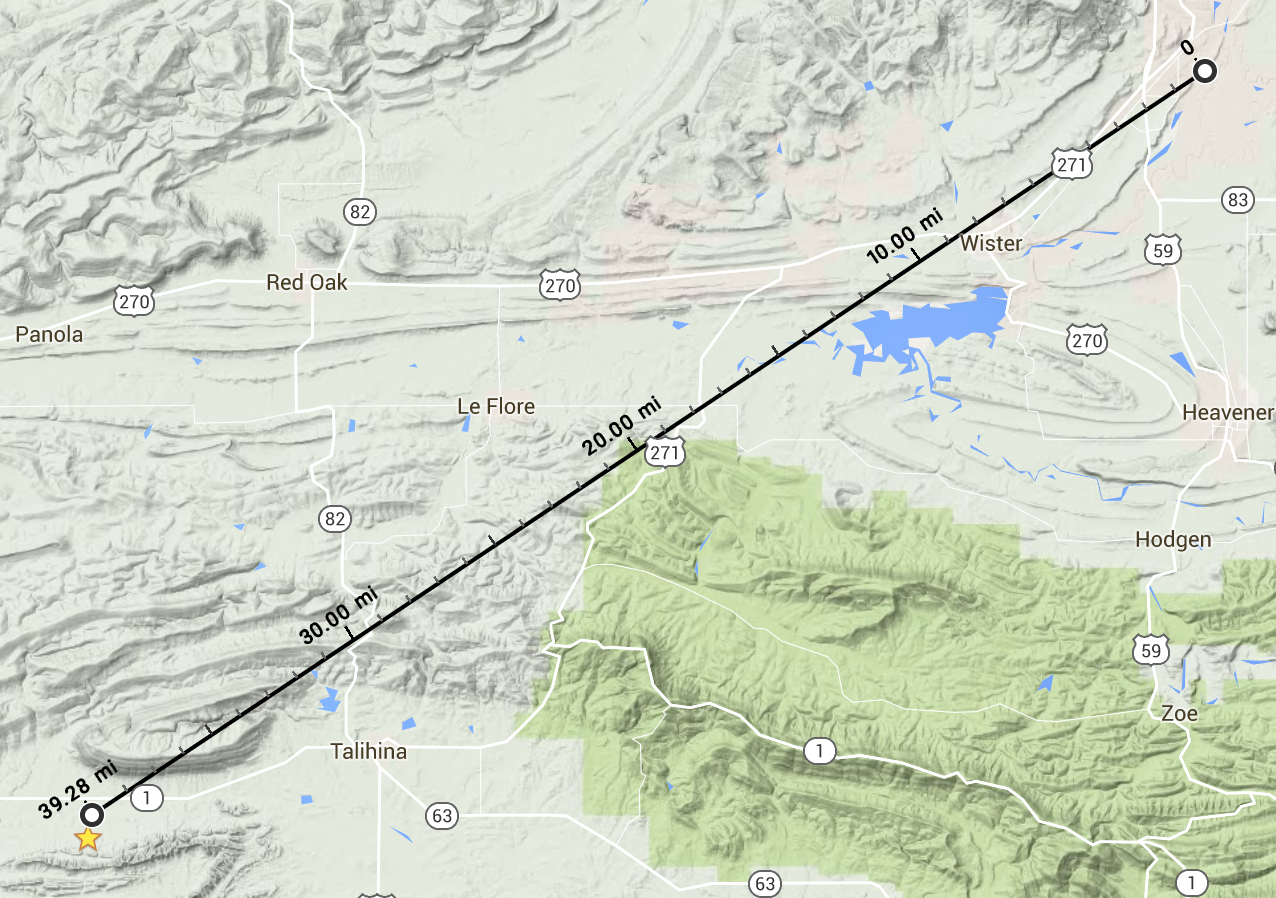 We took off from that random field, and headed to the town of Red Oak for gas. I circled overhead looking for the closest field to the gas station and landed in it. After stowing my wing and gear bag, I walked into town with my paramotor and got gas at the local station. I got lots of strange looks and questions as I sat on the curb eating a Lunchable I had purchased inside. I scarfed down some crackers with ham and cheese and sipped on my Capri Sun. Life was good. 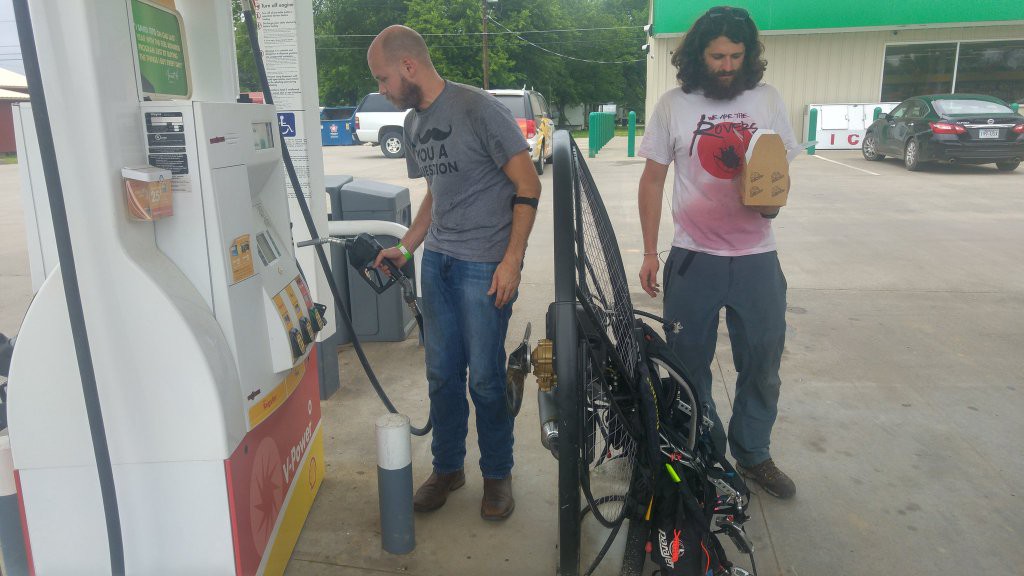 It was at this point I realized I actually had a chance of winning the race. 5 of the 6 other pilots had already dropped out and my only competition had just landed in the same field as I and was having engine trouble. He elected to get a ride back to Arkoma and I though he was out of the race.

After eating lunch, I took off from Red Oak and pointed my glider towards Webber Falls. This leg was one of the longest in the race, but because I had a tailwind I made excellent time. I also had to cross some pretty tall hills without any good emergency landing areas. The views were spectacular though! Webber Falls was definitely the most hilarious stop of the race. I landed in a field next to a Love's truck stop and decided to refuel the motor and myself. After chugging some water and nomming on some onion rings, I attempted to take off and head North to the next checkpoint at Talequah. This was definitely one of my less graceful moments... the strong wind was to much for me to handle in my exhausted state. The wing ended up pulling me off my feet and I landed on my back like an upside down turtle. I decided to call it a day and try to hitch hike to a town where I could get a hotel.

After two hours of unsuccessful hitchhiking, I decided to give up and setup the tent I had brought with me. I got everything put together, grabbed a beer from the truck stop, and nestled in for the night. The next morning, I was up at 5am preparing for take off. I packed everything up, setup for launch, and headed toward Talequah. This leg was also very dangerous. Not only was I running away from a severe thunderstorm, there were also several points in this leg with no real emergency landing areas. Thankfully though, I had a tailwind which pushed me over the terrain in record time. I actually did 60 Mph over the ground on this leg. To put this in context, normally my glider flies about 20 Mph over the ground.

As I got closer to the town, I spotted the airport and setup for a landing. I flew the pattern and performed a perfect landing on the ramp next to the FBO. The pilots inside were all impressed. I hung out at the FBO for a bit drinking coffee and bullshitting with the other pilots before borrowing their courtesy car (a crappy old truck that had been confiscated by police) and heading to a hotel for a much deserved shower. I rested the remainder of the day in order to avoid any potential storms and recharge for the final day of the race.

I took off from the airport the next morning and was now on the final leg of the race. I headed south along the same route I had flow the previous morning. I was fighting a strong headwind and making slow progress, but I had plenty of fuel. Everything was going smoothly (other than being in a T-shirt and it being really f&@*^!$ cold), until disaster struck. I was about 1000 feet high over a forest without any emergency landing areas and my engine died. I adjusted the wing for best glide and started making a plan. My only possible option was to land on the road I had been following, but there was a catch. The road had a power line running on one side of it. As I glided down, I knew this could be it. If I botched this, there was a very good chance of serious injury or death. Since the power lines were certain death, I cheated to the side of the road that just had trees covering it. I hit a tree as I came in and fell from roughly 15 feet in the air. As I fell the wing broke branches off the tree slowing my descent and probably saving my life. I was also quite lucky that my frame hit before I did and absorbed most of the impact. 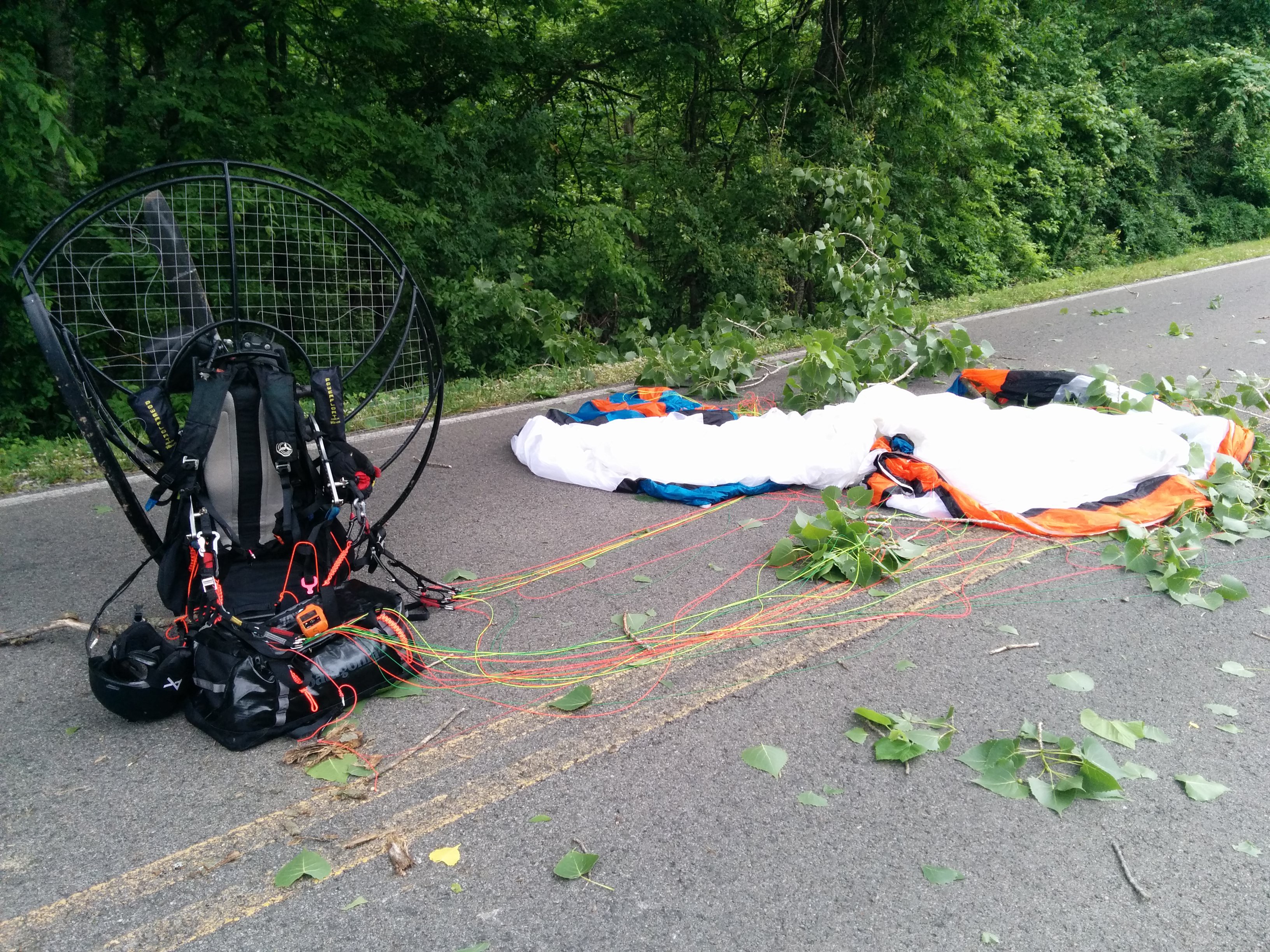 I expected to at least have a few broken bones, but as I evaluated myself I found I only had a small scrape on the palm of my hand. Soon after I got up, my first rescuer arrived and it couldn't have been a more appropriate person! Because Oklahoma has tons of dams, there are Army Corps of Engineers offices everywhere and it was none other than an Army Corps of Engineers Ranger that happened to be the first one driving by. They helped me clear the tree branches out of my wing as well as give me a ride to their office where they provided me with snacks while I waited for friends to come pick me up. 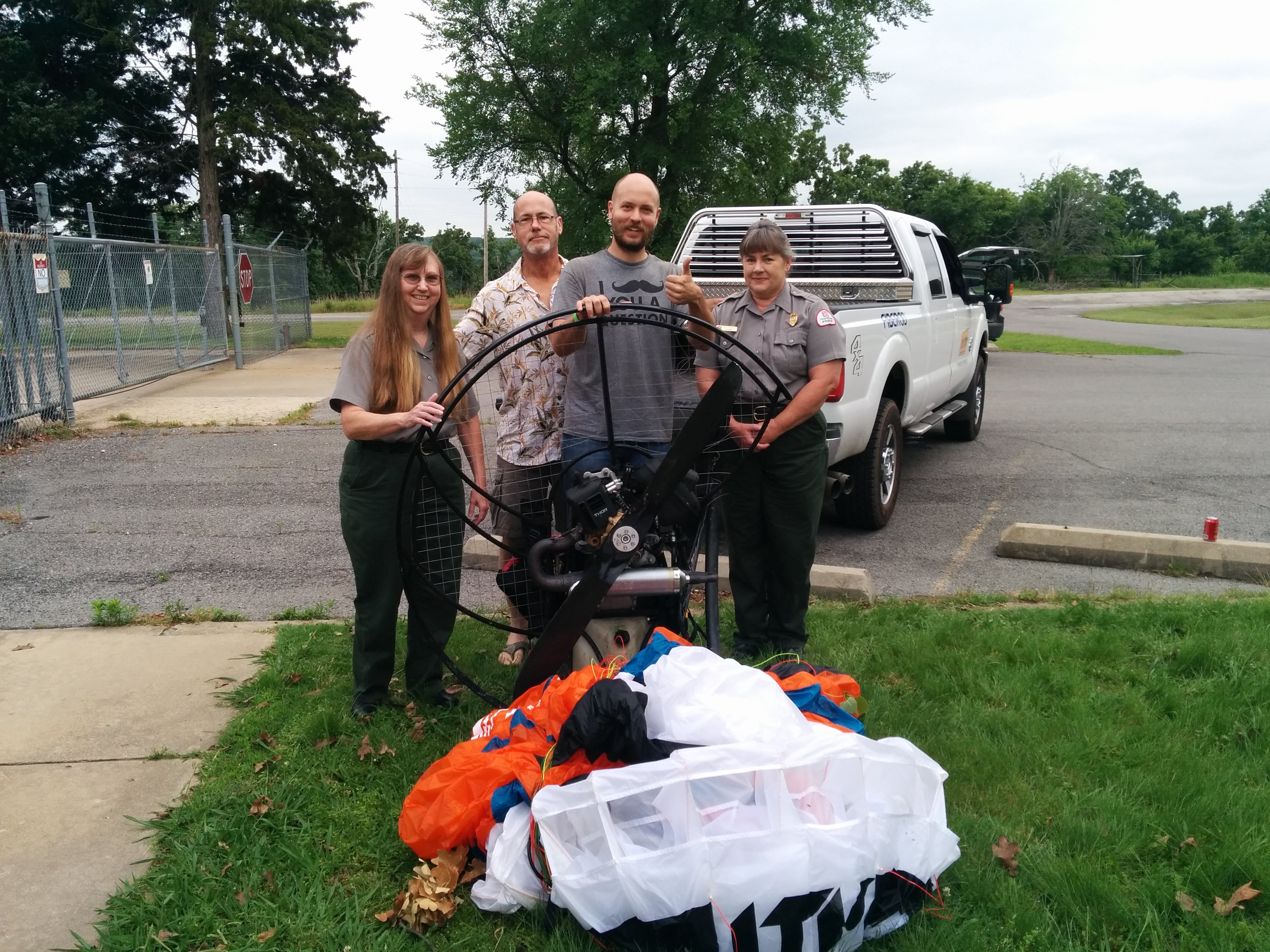 We drove back to Arkoma, but didn't go quite all the way to the finish line. Because I had put my all into this race, my friends let me borrow some gear (mine was completely broken in the crash) so I could fly across the finish line. Five other pilots setup with me in a field, and we took off and headed toward the finish line in a flying "V" formation. I crossed the finish line to cheers from from the entire event. It was an extremely cathartic experience.

Given that I hadn't actually finished the whole race I wasn't sure I would win anything, but later that evening I got the surprise of my life. I was awarded the adventure trophy for the Icarus X race. (Note the Hackaday Prize shirt LOL) 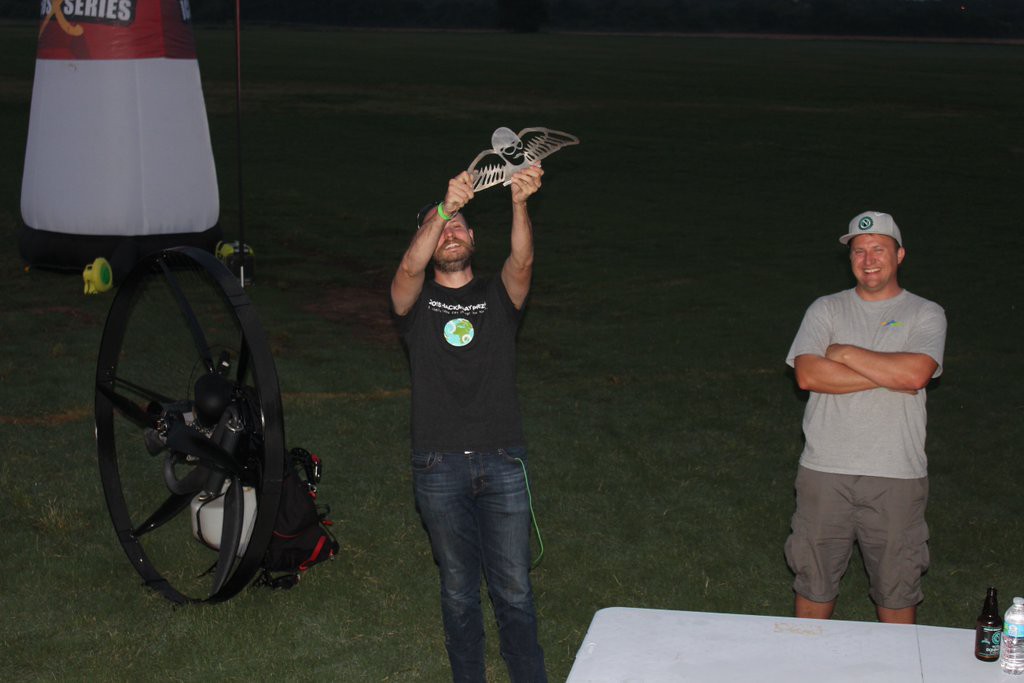 This race was the most challenging experience of my life. There were so many times that I wanted to quit, but somehow I managed to push through it and do things I never thought I was capable of. Have you ever hitchhiked, camped out at a truck stop, or flown 143 miles with a lawnmower engine on your back?

I think there are a lot of parallels between the race and the adventure of starting a business. I don't know what will happen with Polymorphic Labs, the Polymorphic Dot, or the Hackaday Prize, but I do know that if I try it will be the experience of a lifetime and that success will come one way or another.