A GPS tracking system that helps you navigate your city in a safer way, allows the location of your bike if it is stolen and is also a lamp.

BiciTrack is a lamp for bikes that communicates with your cellphone generating system logging and bike tracing and promotes bicycle transportation in cities. The system helps cyclists potential and routine transit through safe routes and to locate stolen bikes.

BiciTrack consists of two subsystems, the tracking system and the virtual platform. The tracking system allows the location of the bike through a GPS module, this information to a local server communicates through the free WiFi networks installed in some areas of the city, if you can not connect to a network, it will store the data in memory and retained until you can connect again. In addition the system can detect bicycles with the same system go through its range (approximately 10 meters) and it will share information about their profile, the routes and their characteristics, prior authorization, or let us know if bike has been reported stolen.

The whole tracking system is embedded within a lamp gadget, which varies it intensity depending on the lighting conditions in the environment. The gadget has LEDs that indicate the status of the WiFi and when you cross bicycles that have the same system.

The gadget has two parts, the lamp with the tracking system and the adapter to the handlebar tube. These pieces are joined through a lock.

The virtual platform works as a social network among cyclists who have the gadget. In that network users can share information on their profiles, their tastes, routes that frequent, knowledge concerning the world of cycling and bicycle theft report. This in order to create safer routes for cyclists, create risk maps for theft and road accidents, as well as promote the use of bicycles in group under users frequenting routes. With this information is intended to promote the creation of better public policies for the use of this means of transport.

Such virtual platform will be available for mobile devices for users who have a Smartphone.

Some additional features of the system: 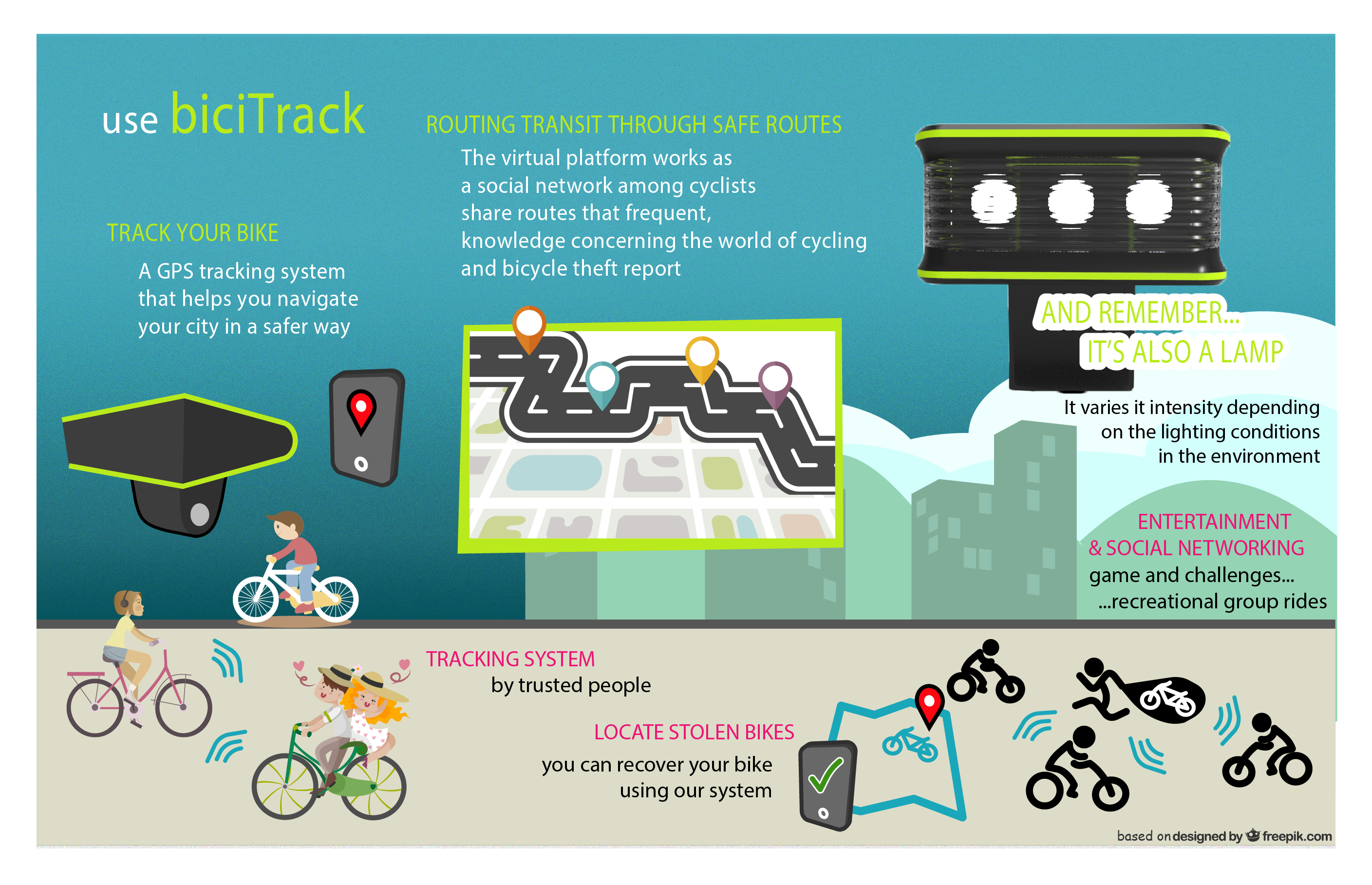 The main reason why cyclists are victims of accidents on public roads is due to the lack of road culture of society, accustomed to dominate and the priority of the car on the streets. Therefore for most drivers cyclists are invisible. The project aims that through the network cyclists transported in groups along the routes that have in common to reach their destinations, becoming more visible to drivers, improving their safety and confidence.

Moreover, the fact that the users of the network build routes based on their experiences ensures greater safety in use.

With the information gathered on the most popular routes can promote public policies aimed at improving the cycling infrastructure of the city.

The application of dynamic as games and challenges on cycling and organizing recreational trips seek to encourage the use of bicycles on urban transport par excellence.

The built-in GPS gadget allows the user to know the position of your bike provided you have an available WiFi connection.

The tracking system allows tracking a bicycle that passes close to the range of other bicycle to consistently find his whereabouts and recover it in case it has been reported stolen.

The use of bike as urban transport has become the emblem of welfare in sustainable
mobility, because the benefits in contrast to motor vehicles: reducing road congestion and greenhouse gas emissions, physical activation, etc. representing the transport system of the future and most of the world's megacities are betting.

Mexico City and its metropolitan area is one of them, and fortunately for the inhabitants, it is estimated that 70% of its surface area is ideal for cycling because the slope is less than 6% and enjoy a climate mild most of the year. On the other hand, it is known that 40% of trips in the city are less than 8 km, distance that can be easily cover by a bike in 20 to 30 minutes. In addition 70% of trips made in the city are those who begin at home or very close to it and culminate in a station of a massive public transport (Metro, Metrobus, RTP, etc.), where the bike represents a potential means of interconnection.

According to “Propuesta de red ciclista para la Ciudad de México” prepared by Bicitekas and the Institute for Transportation & Development Policy, if 50% of people will be mobilized
bike, would be reduced by 55% the space used for transportation, avoid accidents saving 1% of GDP, half of pollutant emissions would be reduced: 2.4 million tons of CO2, 5,000 tons of NOX, CO 80,000 tons and 100 tons of PM10 least a year. And if that was not enough, the same report expected to be reduced by 80% the budget public transportation in Mexico City.

But if the benefits of cycling as an alternative means of transport are obvious and the city offers a potential market, why people do not ride their bikes? According to a survey of companies Kaleydoscopio and Cabinet Strategic Communication of July 2014, 60% of respondents do not use bicycles for transportation because they consider dangerous the city by the lack of road infrastructure and culture, fear is well-founded, and the number of accidents has been growing
year after year, because just last year killed 207 cyclists in road mishaps, considering
only the victims who perished in situ, who were taken to hospital and died shortly after, were filed in other statistics.

In addition, the parking places are unsafe, according to SSPDF in Mexico City steal from 5 to 10 bikes a day, regardless of the lot that is not reported.

Being the ultimate goal to encourage the use of bicycles as means of transport in the city of Mexico, it aims to attack those problems that prevent people from using their bikes: road and bike safety.

The 2015 Hackaday Prize
A free internet, free to use, free from control.
Project Owner Contributor

Presence awareness for the Internet of Things
Project Owner Contributor

A mesh network is a network in which the devices -- or nodes -- are connected so that at least some, and sometimes all, have multiple paths
Project Owner Contributor