The main goal of this project is to build a mobile robot capable of moving and collect data in rough terrain. Such a robot could be used to patrol the surroundings around your house or hard to reach and hazardous places. The project is open to all hackers and makers who want to build a reliable mobile robot for a reasonable price.
Currently, the robot is controlled from an Android app via bluetooth. The robot can also be controlled by voice commands. In my plans this robot should be able to move in autonomous mode.

he following flowchart shows the connections between the modules of the project. The individual electronic modules are connected via different interfaces i.e.: UART, I2C, SPI. The robot can be controlled wirelessly via bluetooth from your smartphone, tablet or computer. The view from the camera is sent over the wifi network to a device with a web browser (smartphone, PC, etc.). 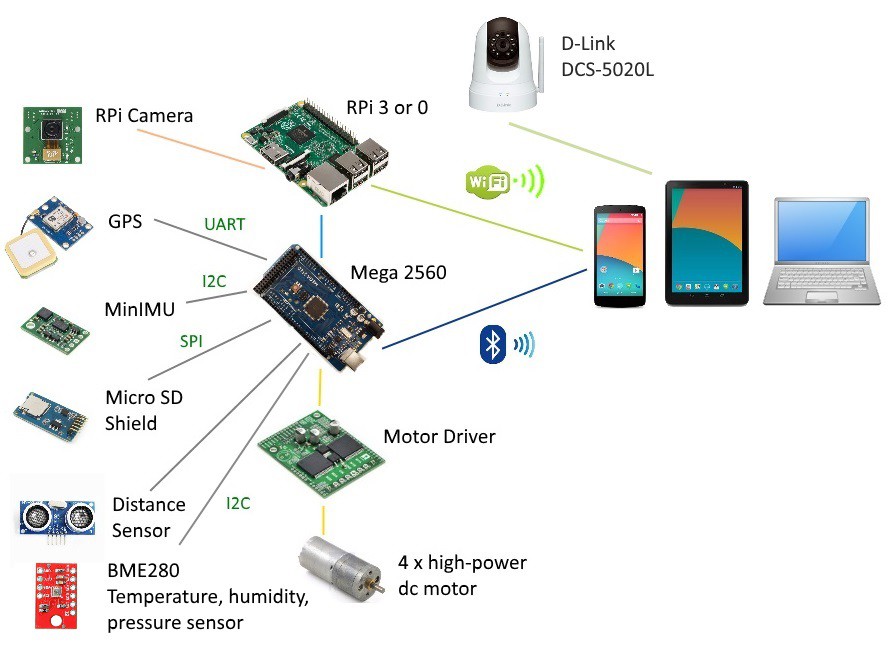 This mobile robot has been designed to operate in rough terrain. So far I've done two tests shown in the following videos. The robot is controlled from smartphone via bluetooth (here is a link to Google play Android app).

On the first video robot moves at full speed fitted with Dagu wild thumper wheels 120x60mm. The second video shows the tests with reduced speed to about 70 percent of the maximum value (tests with other wheels). The measurement data from the GPS and motors load control system were stored on the SD card during both tests. Follow this project if you want to be kept informed about new posts.

Nice design, How large of a payload was the design able to move?

I love this - such a great build!

Thanks Craig, your projects are also great!

2021 Hackaday Prize
It is a robot that grabs sweets and hands them to people while recognizing objects and people using a depth camera.
Project Owner Contributor

The 2016 Hackaday Prize
This is a robot platform with stereo cameras and omniwheel drive. It can be connected to HMD (e.g., google cardboad, ocolus rift, ...)
Project Owner Contributor

Robot for telepresence and VR experiments