The output from the sensor is a pulse of charge. The height, length and shape of the pulse don't matter much, only the total charge. So what is needed is a charge sensitive (integrating) amplifier.

Take a perfect amplifier with a large negative gain and place a perfect capacitor between the input and output terminals. Any charge placed on the input will generate an EMF and will immediately result in the opposite EMF being applied to the other side of the capacitor sucking the charge into it. Indeed the capacitance seen by the input is much larger than the component value by the Miller effect. This makes the input of the charge amplifier a virtual ground even though there is no DC feedback.

Translating this into a real circuit means working round one problem. Every time a pulse of charge enters the perfect circuit the output voltage steps up. With no way to discharge the capacitor any real amplifier will eventually saturate. There are two ways to solve this; Continuously discharge the feedback capacitor with a longer time constant than the pulses of charge to be measured or periodically discharge it before it reaches too high a level. The former is the easiest to do and can amount to as little as a high value resistor in parallel. The latter has the lowest noise but is more complicated.

So far, nothing scary. What makes this tricky to design and build is that the charge produced by a PIN diode is very small. A 5kev X-ray from a silicon sensor produces a pulse of less than 1400 electrons. To achieve 2kev resolution will requirea pre-amplifier with an input referred noise of less than about 220 electrons RMS. This means a good design, components and EMF shielding. 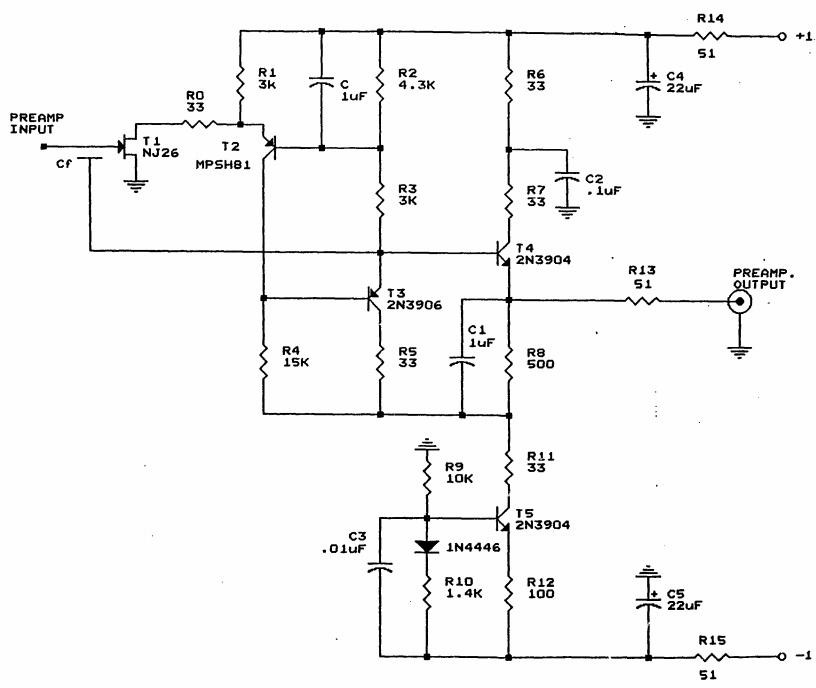 The Bertuccio1992 design is very clever and breaks previously established methods in nuclear electronics. For one the input FET is forward biased from the detector which is normally a nutty thing to do. The Interfet NJ26 is equivalent to the old 2N4116, low noise, low gain, small input capacitance. This is key to how they pull of the trick. A modern higher gain FET matching a larger input capacitance will likely burn out in the same circuit. It is probably unsuitable for detectors more than a few pf and it may need protection from nA level input currents. The rail voltages were not lost when I cropped the image, they are missing from the scanned sheet. I will chase. This is an awesome hack, but it's someone else's awesome hack and I will test a lot of other designs. It may be that modern op amps and FETs will close the gap.