You might wonder why I'd bother spending so much time worrying about EMI from the clock. There are basically two reasons. First, I want to be a good RF citizen. In my astrophotography hobby, I'm constantly battling light pollution, so I understand the impact of unwanted photons. I'm slightly less involved with amateur radio, but I've seen the problems of RF noise there, too.

The other reason for concern is that I would like to stay out of trouble with the authorities. In the US, the FCC enforces rules concerning EMI. I believe 47 CFR 15.23 covers this situation:

(a) Equipment authorization is not required for devices that are not marketed, are not constructed from a kit, and are built in quantities of five or less for personal use.

(b) It is recognized that the individual builder of home-built equipment may not possess the means to perform the measurements for determining compliance with the regulations. In this case, the builder is expected to employ good engineering practices to meet the specified technical standards to the greatest extent practicable. The provisions of § 15.5 apply to this equipment.

The 15.5 section they refer to basically says that you can't operate your device if it causes harmful interference, or if the FCC notifies you that you must cease. I won't ask anyone to comment on whether I observe "good engineering practices" :-)

I finally had some time to collect some data on the power supply end-to-end. For all these measurements, I used a stack of seven DDL01's (various 2.x versions) and a DDL02 power supply, shown below. All measurements were taken between the Vrf and ground connections, i.e., the standoffs in the upper right. In each case, measurements were taken at three points along the stack: at the power supply board, after the fourth board, and after the seventh (including standoffs protruding from the back of the last board). Here's the output in the time domain. At the power supply end, we can clearly see the VHF ringing as was seen driving the resistive dummy load. Interestingly, though, the ringing is diminished substantially as we move along the stack. By the seventh board, it is all but gone.


This puzzled me for a while: intuitively, I thought the inductance of the standoffs should be low enough so that the supply would be essentially unchanged by a reasonably long stack of boards. The problem is that my intuition has been shaped by years of playing in the 50-ohm world; things are very different here in the milliohm region.

Allow me some "spherical cow" calculations. Let's treat the Vrf and ground standoffs as a short parallel transmission line, which is nicely modeled as an inductance. The standoffs are 5mm diameter (hexagonal, but assume round), 11mm long, and 19mm apart. A web calculator estimates the inductance of these parallel lines as about 8.9nH. At 3 MHz, this yields an impedance of 0.17 ohms, which would indeed be negligible in a 50-ohm system, but is really significant compared to the 0.13 ohm output impedance of the DDL02.

In case the cow wasn't quite spherical enough, let's further model each DDL02 board as a single 120 nF capacitor in series with a 22 ohm resistor (there are six gates on the board, each with a 10nF capacitor to a each of a 330 and 220 ohm resistor - it's a very rough model, and ignores any "off" diodes and the board layout entirely). Assuming this, we can model the stack of boards as a multi-section RLC filter. For convenience, I've lumped all the inductance into one inductor at each stage - the reality is a bit more complicated. Here's the over-over-simplified LTspice model:

and the associated Bode plot:

It turns out that using standoffs for bussing RF to the boards has formed a nice low-pass filter, reducing the harmonics most likely to be radiated from a structure this size. I wish I could take credit for this, but it was pure accident.

I guess one could divide the measured spectra at the various points (shown below) to estimate the actual response. Maybe I will collect the data to do this after some more of the documentation is complete.

For the frequency domain plots, I switched to using the DDL04 as input with the usual 3-divider for the bandwidth spread setting. A look at the spectrum to 100 MHz shows the VHF frequencies between 60 and 70 MHz are decently attenuated by the accidental filter:


Finally, a look at the spectrum to 10 MHz shows output similar to that of the DDL04 alone: 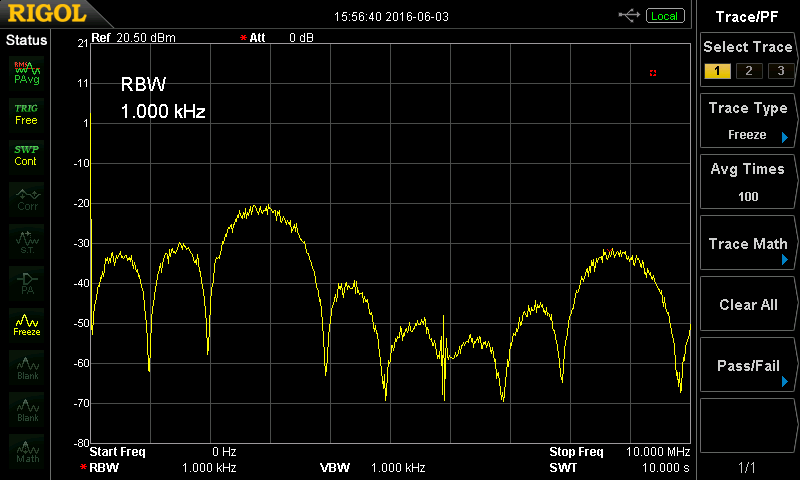 It's important to remember that the values plotted (in dBm) here assume a 50-ohm system impedance. In a fully-loaded DDL02 with a load impedance of around 1 ohm, the actual power would be about 50 times (17 dB) greater than reported.

What does it mean?

Not too much. To really evaluate the potential for radio-frequency interference from the DDL system components, we'd have to measure low-frequency emissions back into the power supply using a LISN (line-impedance stabilization network), and higher-frequency emissions with a calibrated antenna in an anechoic RF environment. I don't have access to any of that stuff, so I ran some simple tests. With a portable receiver, I tested reception of several shortwave stations, including one in the vicinity of the 9 MHz lobe of the above spectrum. Within about a meter of the 7-board stack, the interference was pretty strong and clearly mechanical sounding. By the time I had walked to the other side of the house, however, it had faded into the noise floor (although it's possible the noise floor itself had been raised).

The bottom line is that I'm not too worried about emissions from these devices at the moment - I just don't think it will be a problem. If I do end up interfering with something, I'll shut it off and revisit the issue.

Next up: I got a heavy box of goodies from DigiKey yesterday, including alternative ferrite cores to test, as well as (10) 1N4007s from every manufacturer they carry. I'll run some tests to see if there are any "duds" in this application. My suspicion is that they'll all work fine...