Diabetes is a serious disease that affects nearly 400 million people worldwide and is the 8th leading cause of death. Blood glucose meters play a very important role in managing diabetes as they provide the patient with the ability to monitor their blood glucose levels from home and at any time of the day. The pharmacy provides a large number of blood glucose meters and accompanying test strips. Typically, the patients insert one of the disposable test strips into the meter, prick their finger, load a droplet of blood into the test strip, wait a few seconds and get an instant reading of the current blood glucose level.

Usually three electrodes are printed into the test strips: a reference electrode, a counter electrode and a working electrode. A fixed voltage is applied and the resulting current after the blood is loaded is monitored. The current response is then related to the glucose concentration through calibration. Since test strips may vary from batch to batch, some models require the user to manually enter in a code found on the vial of test strips or on a chip that comes with the test strip. By entering the coding or chip into the glucose meter, the meter will be calibrated to that batch of test strips. One Touch, the brand of test strips we will primarily use, has standardized their test strips around a single code number, so that, once set, there is no need to further change the code in their older meters, and in some of their newer meters, there is no way to change the code. Figure 1 shows the One Touch Ultra test strip connections. 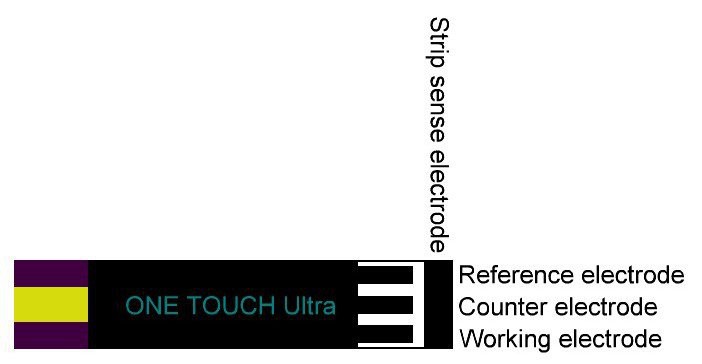 Typically the electrodes are coated such that an enzymatic chemical reaction occurs at the electrode surface and this reaction dictates the resulting current. The details of the electrochemistry can be quite complex. Since commercial strips are used, the details are somewhat unknown as the companies do not release detailed data about their particular test strips operation. Some devices apparently watch the current after a short initial transient (the current will level out to some degree) and then report the current after a fixed time. Another principle looks at the total amount of reaction which has occurred and thus integrates the current with respect to time to obtain the total amount of chemical reaction which has occurred. Our glucose meter will make two measurements to determinate which relates more strongly to the glucose level: one is the current after a fixed time and the other is the total integrated current.

Hello, I am interested in acquiring a plate to work with it and use it in my final degree project. my email is: aarongalvez@correo.ugr.es

I want to share the reference schematic link with you guys. I created the schematic for the Arduino based glucose meter shield on Flux Online Simulator.

Let me know if you have any questions in your mind.

The test strips are the expensive part of a glucose measuring system.  Commercial products use the "Razor, Razor Blade" value proposition--give away the razor and make money on selling blades.  Any new product that requires finger sticks and test strips does not meet the consumer marketing success proposition:  "Fulfill unmet customer needs at a reasonable price"

@M. Bindhammer You can recreate the glucose meter product on your own. I have created the reference schematic on Flux online simulator.  Here is the link:
https://www.flux.ai/ramprakashvishnoi8/arduino-blood-glucose-meter-shield

@Peabody1929 You can recreate the glucose meter Arduino shield on your own. I have created the reference schematic on Flux online simulator.  Here is the link: https://www.flux.ai/ramprakashvishnoi8/arduino-blood-glucose-meter-shield

I bet that glucometers using strips is obsolete. My choice is accu check mobile. That is the most handy device nowadays. But it has one problem: its size. It is too big though. I have a dream about principally new type of glucometer. Look at the lancet accu check fastclix with changable drum for 6 needls. Just imagine that a glucometer is integrated in such lancet wich makes tests using needls only! One needle - one test! I'm not scintist, and that is why I'm interesting whether it is possible or not? I appriciate your opinion and thank you for your job!

This Idea is really impressing. I love your reasoning. I feel this idea is possible, It's implementable

Is there any schematic! Where I find it! Thanks

Hi, For the schematic you can follow the link. I have created the schematic on the Flux online simulator tool.https://www.flux.ai/ramprakashvishnoi8/arduino-blood-glucose-meter-shield @ennnnng

I would like to ask if the code you are using is also an open source, if it is where can I get it?

FWIW, Glucose Oxidase is used in baking.  It might be possible to get some from a bakery supply store.  Google is your friend in this matter.  I saw a place that was selling it, no price given, but the amount was 22 kg per order, so a bit too much, if you ask me.  I also saw cheap test strips on Amazon.  Something like 24 cents per strip.

I would like to ask if you purchased the shields PCB or you printed it?

I gave the Gerber files to a PCB printing fab.

Can you please share the sample code for this project.

Any news about sample code? Thanks in advance.

Just read my logs of this project!

Sir, The Gerber files u have unloaded for the project "Open source Arduino blood glucose meter shield" has some bugs... Can u please upload the corrected gerber files in this website or forward it to the mail id- shilpa.gopal.bg@gmail.com

Sir,   The Gerber files u have uploaded for the project "Open source Arduino blood glucose meter shield" has some bugs... Can u please upload the corrected gerber files in this website or  forward it to the mail id- rameshagowda555@gmail.com

The gerber have no bugs, just tested them again.

I really like ur project and I was asking if the one touch test strips are replaceable as they are expensive and if they weren't could u supply me with the strip structure...

Understand that u may be busy...

Many thanks in advance...

Hi everyone, here (https://bit.ly/2A19Yuh) you can download a 3D model of the test trip connector for ONE TOUCH Ultra test strips I did on my own. Once printed, you will need to add the contacts to make it work. I haven't tested yet but I think it worths a try.

I like your project,and I think that should apply to measure liquid of fruit which have glucose within that also.

How do I get your glucose meter shield for Arduino and one touch ultra test strip using together ?

Thank you in advance for the answer.

i'm looking for the test strip connector but i can't find it, could someone help me telling me where i can buy it?

Bindhammer, I have a question: How can I get a copy to buy? more specifically import? I am an electrical engineering student and I greatly enjoyed his creation.

Hello, I'm thinking of trying to develop a custom glucometer, but the strips that I have already are for the Contour Next meter, not the OneTouch meter, and they use their own test strip socket/contacts. Is there a way to get sockets for this? Here's the best picture I found of the strip, if it helps:

I'm working on that,  I want to find solution if you have any suggestions I would be thankful for that

hi. I try to build a glucometere and use it via android phones. And i use one touch ultra strip. But i have big problem. Electorde of the strip seems to be insulator and i cant get a voltage from it. Dose the strip connector use a specific conductance?? Please help me it is very urgent. Thank you

can any one please help me,on project of blood glucose testing using arduino uno if you have the  simultation on proteus and arduino source code send me on email-getshman397@gmail.com for learning and understanding purpose

have u get the details of this project ??

A tester that can be used by high school students to test the batteries for capacity.
Project Owner Contributor

A new design, made from scratch, for a digital bench power supply to offer regulated voltage and current, and prompt shortcircuit protection
Project Owner Contributor

This project is based on MAX5719A from Maxim. Hopefully, This will the most easily programable voltage reference.
Project Owner Contributor