Iota is designed to bring The Internet of Things to hobbyists in an affordable and easy to use system.

By making the nodes simple and cheap, Iota allows you to put them everywhere in your house and by providing a common interface, allows you to monitor, control and automate your own smart house.

Iota combines cheap AVR dev boards and cheap nRF24L01+ radio modules to create a home network of sensors, and "actuators" which can switch things on and off through your house.

Over time you can build up a custom smart home, all wirelessly and designed to be light on power to allow long run times from 2xAA batteries. One of the primary goals of Iota is to make it simple to build a network of sensor and actuator nodes.

It is easy enough to combine a micro controller and radio to send simple messages, but you have to write special code for each case, each new message you want to send.

So as you add more nodes, more combinations, the code becomes harder to write, harder to combine. 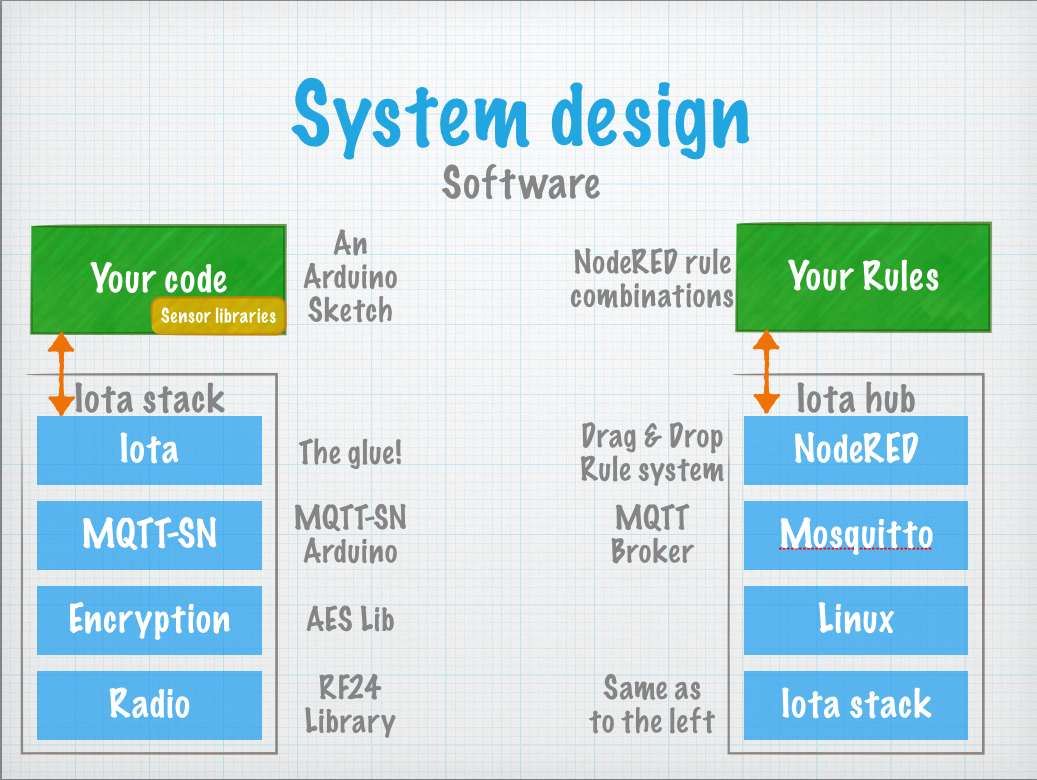 Iota solves this by providing a higher level abstraction using the MQTT-SN protocol allowing different messages to be sent without needing special code for each case.

Another thing Iota provides is security.

By default, the radios used in Iota send messages in plaintext, which means anyone can listen in or even inject their own messages.

You might not care if your neighbour knows the temperature of your room, but you sure don't want them switching your lights on and off in the middle of the night!

To protect your network of things, Iota encrypts messages between the nodes and the hub using the AES encryption standard.

Some of the work I've been doing for a similar project, but for atmega328 and RFM69 (Although I've been meaning to try porting to NRF) may be useful here.

I have power save beacon mode,over the air pairing like Bluetooth, 64 bit timestamps for the message ID that give you time sync to within millisecond as part of the replay protection, ultra low power beacon frames(I'm aiming for under 10uA, with the ability to wake a device up within a minute), a gateway (Currently requires a Raspberry Pi or other computer, and is integrated with my Kaithem framework,but I'll probably make a standalone version eventually).

My overhead is fairly high, but not too horrible, 12 bytes for the less-secure RT frames, 25 bytes for the full packets with 8 byte MACs, and 9 bytes for a beacon frame, in addition to the low level preamble and sync word(6 bytes for RT, 8 bytes for everything else).

Packet size also doubles if the signal gets too weak, because there's a header bit that will turn on a Golay code to correct errors and give you about 30% more range, it can correct 3 out of 24 bits.

In practice I don't think that's as much of an issue because of the automatic TX power control algorithms to keep from crowding the airwaves.

I also have mesh network support planned for one or two hops, I'm hoping I can just use a heuristic and repeat anything weaker than -55db, unless we see a very strong copy of it while waiting a random time to send it.   I think that should be fairly efficient with bandwidth.

What I don't have is an application layer, just a pipe to send raw messages.  I'd really like to define a standard way to read, write, or request registers so things could be truly plug and play though.

Nathan, very cool! I'm building something similar. I'm currently using a Chipkit UNO32 or Fubarino Mini (PIC32 as opposed to an AVR, but I have Arduinos also), a W550io board and sensors (usual assortment). I'm working with MQTT but will check out MQTT-SN also. I have it talking to Misterhouse and Node-Red. I hope to get Homeseer 3 talking to MQTT so it can join in. :-)

I'm going to take a look at the AES library and work it into my existing code. Thanks for the ideas.

nathan.andrew.williams wrote 12/12/2014 at 09:37 • point
Actually the hard work has already been done:
https://github.com/DavyLandman/AESLib

Using a radio that already has it would make it more expensive.
Doing it in software would allow me to make a node that uses a $1 radio and $2 AVR.
If you know of a radio that provides AES encryption cheaper than that, I would love to know!

I don't know of radios that do, but  ChaChaPoly is a little lighter I think, and it's a stream cipher, so you don't have to pad messages to 16 bytes to use the authenticated modes.

RFM69s have AES, but I don't use it because it seems to be a near useless unauthenticated ECB mode.

Jimmy wrote 10/25/2014 at 13:32 • point
Great project! This IoT technology is going to be the future of mass device automation and spark new generation collaborative community, really exciting stuff.
However, I would like to know what separates your project from an existing one called "The Thing System" as seen here http://thethingsystem.com/. It appears to me that both are attempting to accomplish the same but with slightly different communication and management methods.

nathan.andrew.williams wrote 07/05/2014 at 06:11 • point
Wow, I love your project!
Thanks for introducing me to OpenHAB, I hadn't heard of it before and you have just opened my options up.

I hope you will find something useful to take from my project in return!

Adam Fabio wrote 06/14/2014 at 06:37 • point
Nice idea Nathan - thanks for submitting the Iota to The Hackaday Prize! I love those nRF24 Radios - and having a simple way to get nodes online through your hub will be great! Looks like you've got the "connected" side of things well covered - but keep those photos coming in once you've got your prototypes underway.

nathan.andrew.williams wrote 06/14/2014 at 09:37 • point
Thanks for the support!
I have had a couple of set backs lately, along with a 6 month old getting her first few teeth.

I hope to get some new updates out soon.

Samuel Wittman wrote 05/27/2014 at 22:40 • point
Yeah, I dunno much about hardware, either, just that switch boxes are expensive, especially as the numbers get higher. If you can get away with it in software, like a giant computer with capture cards and outputs, that would be ideal, and would make playing around with audio much easier. This is definitely an expensive option, but I believe less expensive and more featured than manual switches.

As for consoles, the power point doesn't work, especially on modern and future consoles. All require some sort of physical button push to go from off to on, and the repeated blackouts would eventually be damaging.

Samuel Wittman wrote 05/27/2014 at 17:22 • point
Hm. One cool thing that might not be easy is turning gaming systems on and off. Since controllers are bluetooth now, it should be possible to connect to each console with bluetooth and send whatever "start console from controller" command and then temporarily shut off so that this frankenstein device doesn't eat up a controller slot. This would probably require canibalizing a controller for each system, which may be a bit expensive unless you use cheap chinese alternatives, which isn't a bad option.

As far as real AV stuff, in an ideal world, I'd like some magic box that offers n*k switching over ALL types of inputs, giving the ability to put any video input (games, computers, vcrs) on any video output (monitor, tv, projector), including the same stream on multiple sources, and different streams on different sources simultaneously. I'd like to do the same thing for individual audio channels, independently of which video source it belongs to, so I can hotswap which speaker is playing which channel, as well as control relative volumes.

Light control, including rgb, is a must. Also some ability to specify complex behaviors. I'm imagining a system where, when I put a video on my projector, my lights turn off and my blinds close. If someone rings my doorbell, my lights come on.

Two features I'd love to see, but probably aren't easy, are voice control and in-home person tracking. Say I'm watching tv or netflix as I do housework. As I walk from room to room, my video follows me to whichever set of AV equipment is in that room. Another, easier example would be lights. My roommate likes to have the lights on everywhere, but she tends to leave them on. If lights could come up in the rooms she's in and turn off behind her, I'm sure I'd save a ton on the electric bill.

nathan.andrew.williams wrote 05/27/2014 at 21:40 • point
For the consoles, would it be enough to switch the power point?
That would probably be easy for turning it on, but I guess regular black outs to the console might not be best for its health... (It used to be simpler before they had hard drives!)


As for the AV switching, I can imagine modifying a HDMI switcher box easily enough, but the analogue channels would be harder (VGA, composite, audio etc).
I'm just a software guy with a hardware hobby, so I don't know enough about if you could switch them through solid state relays or if there is a simpler option.

Voice control might not be as hard as it seems, there are voice recognition modules like this one: http://www.robotshop.com/ca/en/easyvr-speech-voice-recognition-module.html

Or you could get some voice recognition software on a Raspberry Pi possibly.
I can imagine pairing that with a bluetooth dongle and headset to let you roam the house while turning things on and off!

As for person tracking, you could get away with something simple like IR motion detectors, but trying to tell who is who would need something like a Kinect and clever software (most likely beyond my skill set).


As for the doorbell and movie example, I can completely imagine it.
When you hit play on the remote, the system detects it and triggers the blinds.

When the doorbell is pressed, the system could play back the IR remote signal to pause the movie and then simply turn on some side lamps via a relay, or if you are feeling adventurous it could be wired in to the room's light switch!

I have working offline voice recognition in Gstreamer with pocketsphynx, haven't tried it on the pi but I hear it works.  It works great on regular Linux, I can just go to the web interface for the virtual mixing board, create a mixer channel that has the recognizer as an output, and connect the input to a microphone.

The key to using pocketsphynx is to only use keyword and keyphrase spotting more, accuracy is pretty much trash as far as I can tell in full transcribing mode.

There is also Mozilla's deepspeech which runs on the pi 4 and apparently has seriously awesome accuracy, but I don't have a Pi 4.

Samuel Wittman wrote 05/22/2014 at 16:59 • point
This looks frickin sweet. I've been contemplating something similar, but in a wired format for the purpose of some interesting AV controls.

I have so many great ideas to build on top of this, I just have to get the foundation done first.

What kind of AV controls do you have in mind?
I'm looking for more example "use cases" to help explain what I am trying to achieve.