EDIT (8/11/16): I re-plotted this with better data after fixing a bug in my light sensor driver: see addendum.


I mentioned that there was enough raw data in the figures on the HLMP-CE34-Y1CDD datasheet to calculate the relative efficiency, at least for larger values of current. As a double-check, I ran a few numbers manually, and the peak efficiency seemed to be there in the data, but I still wasn't fully convinced - this is a new light sensor for me, I just wrote the driver, and a lot of things could have gone wrong. So, this morning, I digitized the data from the plots in the datasheet and ran the analysis on their data:

I took screen-shots of the two pertinent graphs from the datasheet, Figure 2 and Figure 3: 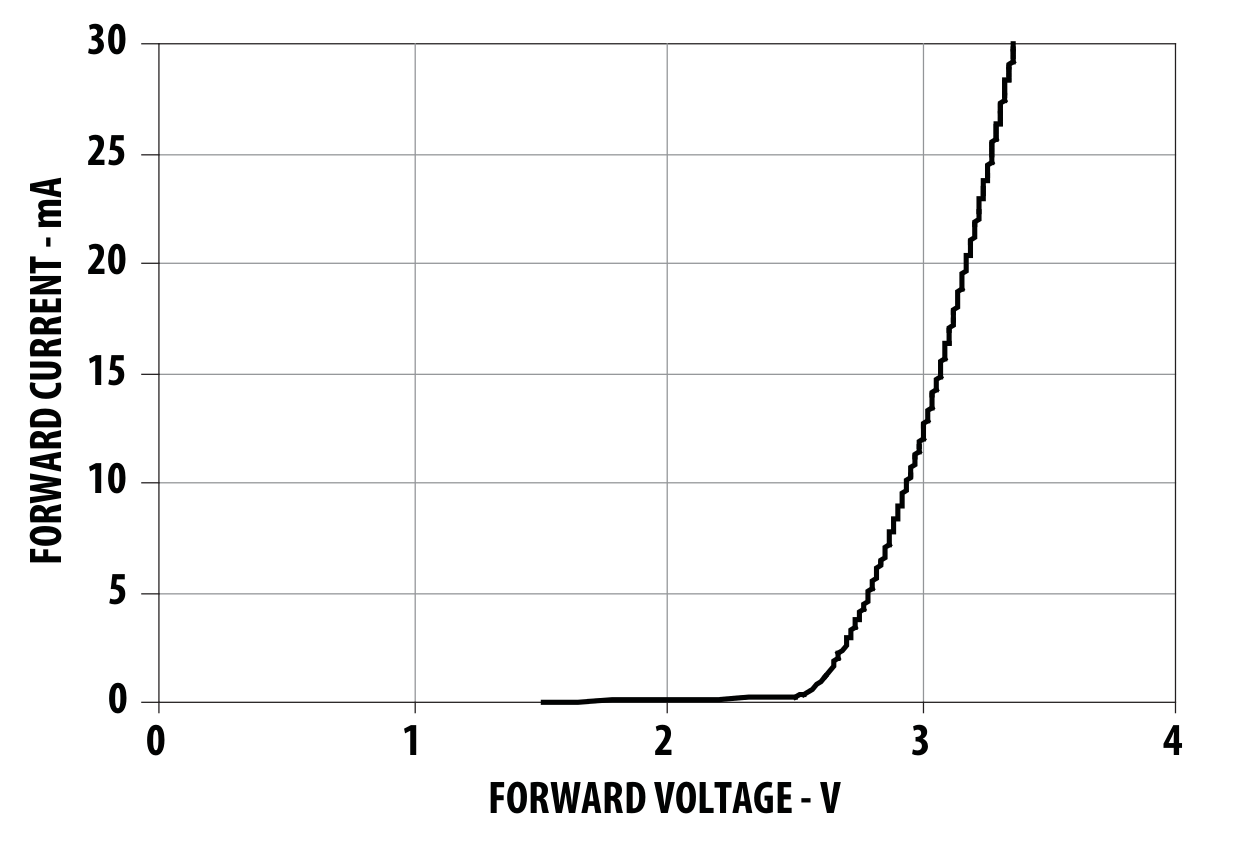 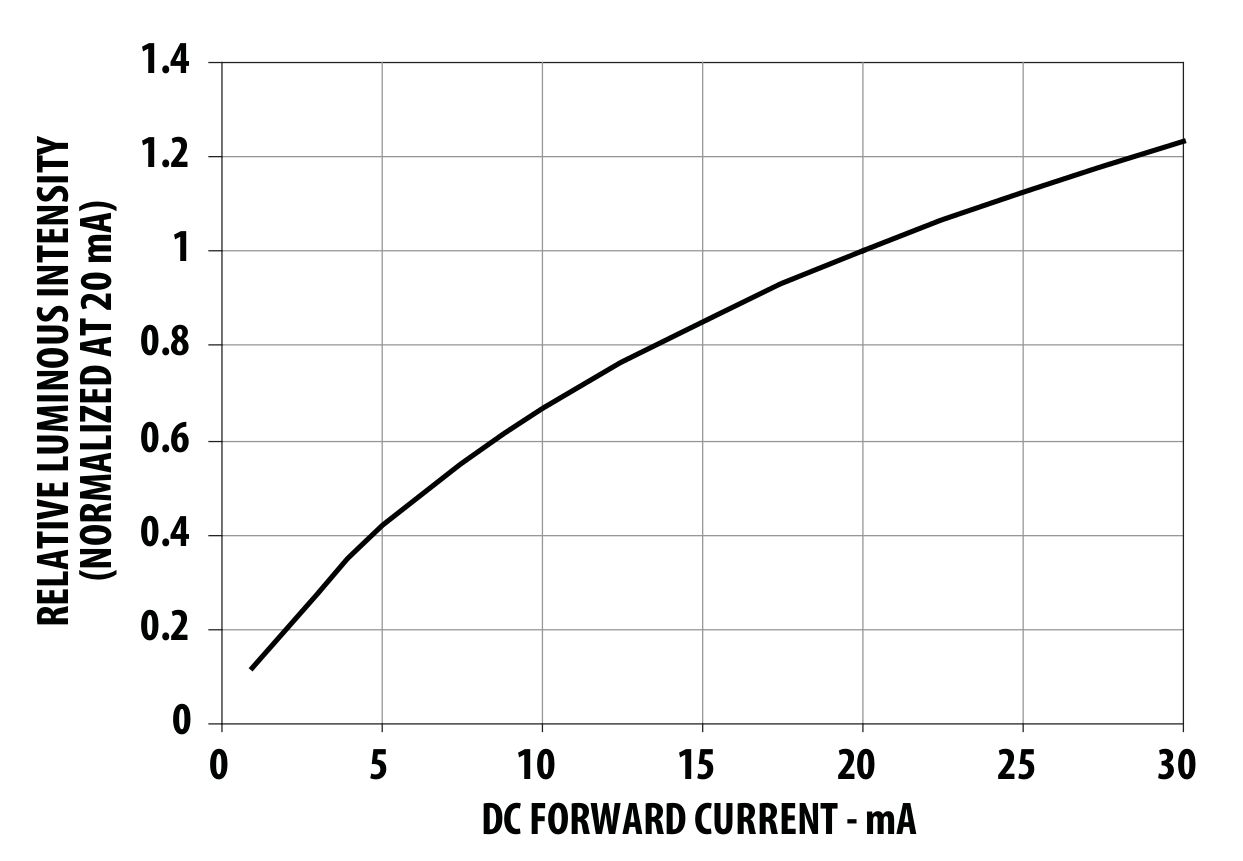 I used the really nice Engauge Digitizer software to get data points from these images. I had tried similar software in the past, but I like this one the best by far. It was just a few minutes to pull a table of data out of each image. I used a little octave code to invert the IV data and resample onto the same current sample points, then plotted the results:

The calculated efficiency (using the same formula as before) is indeed greater for smaller currents - the datasheet graphs don't go below 1 mA, so we can't say anything about very low currents, but it's clear from this data that you lose efficiency if you drive this LED with any more than 1mA. The striking thing is that this data suggests an even larger efficiency drop than I measured. Here are the two sets of data on a single plot: 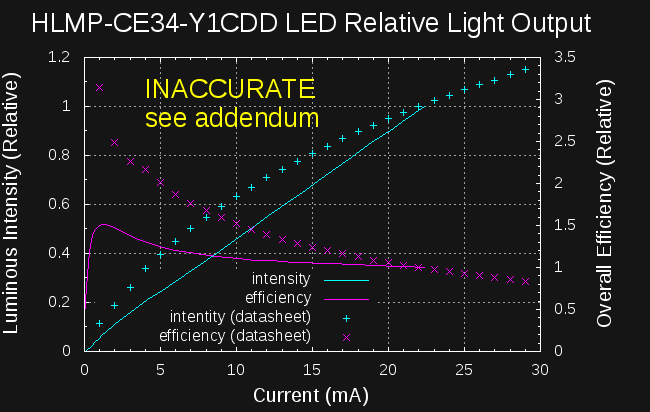 I normalized the two sets of data so that the curves from the datasheet would match mine at the arbitrary efficiency = 1 point. I'm not sure yet why the datasheet values don't line up better with my measurements - I've never seen a manufacturer's datasheet that didn't exactly match the actual parts before :-)

I does bother me that these curves don't match better, but it would appear to confirm that this LED is most efficient around 1mA.

So, why don't manufacturers make the LEDs so that their "normal" operating point (If = 20mA in this case) coincides with the maximum efficiency? Isn't efficiency the whole point of the "LED Revolution"?


When this project was written up on Hackaday, one of the commenters, [rnjacobs] pointed me to this article about LED "droop". The article shows the following plot:

then goes on to say:

So why not simply drive the LED at the current density that produces the peak external quantum efficiency? Well, because in order to target the same light output, the area of the chip will have to increase by an order of magnitude, but because the cost of the chip scales with its size − and the chip is a major cost contributor to the device − this would result in more expensive LEDs. So one has to choose between very efficient LEDs at very high costs, or less expensive LEDs with lower efficiency.

OK, so we need to forget about the recommended values in the LED specifications and find the maximum efficiency point for ourselves to design ultra-efficient glow markers. This may also validate my original choice of the Luxeon Z LED, which has a large die area (and correspondingly high cost).

I found a bug in my auto-ranging code for the light meter that could produce bad data when changing ranges. I re-ran the experiment after fixing the bug, and obtained the following curves: 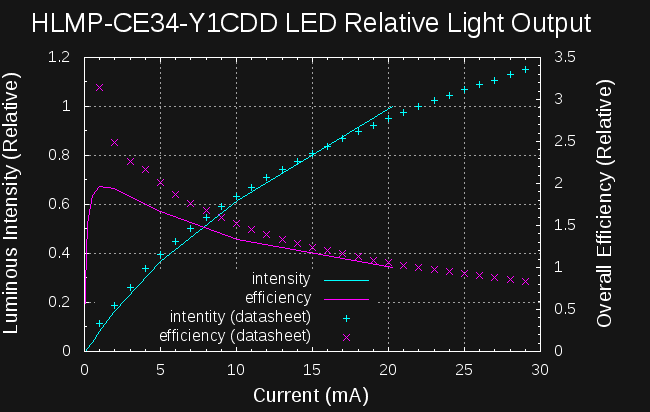 The relative intensity curve now matches much better; the output droop at high current is clearly apparent in the new data. The efficiency curve is also close to that derived from the datasheet, although it's still a bit off. Interestingly, this new data shows about a 2x difference between the efficiency peak (1mA) and that at the recommended current (20mA). The datasheet-derived numbers would indicate a factor over 3x. Some of the difference may be attributable to errors in scraping the data from plots.