Now that I have a first prototype of #Automated LED/Laser Diode Analysis and Modeling running, I decided to see how well matched the relative efficiency curves are for a set of LEDs from the same batch. I have 8 of the ones I have been testing, so I cut them off the tape and labeled them: 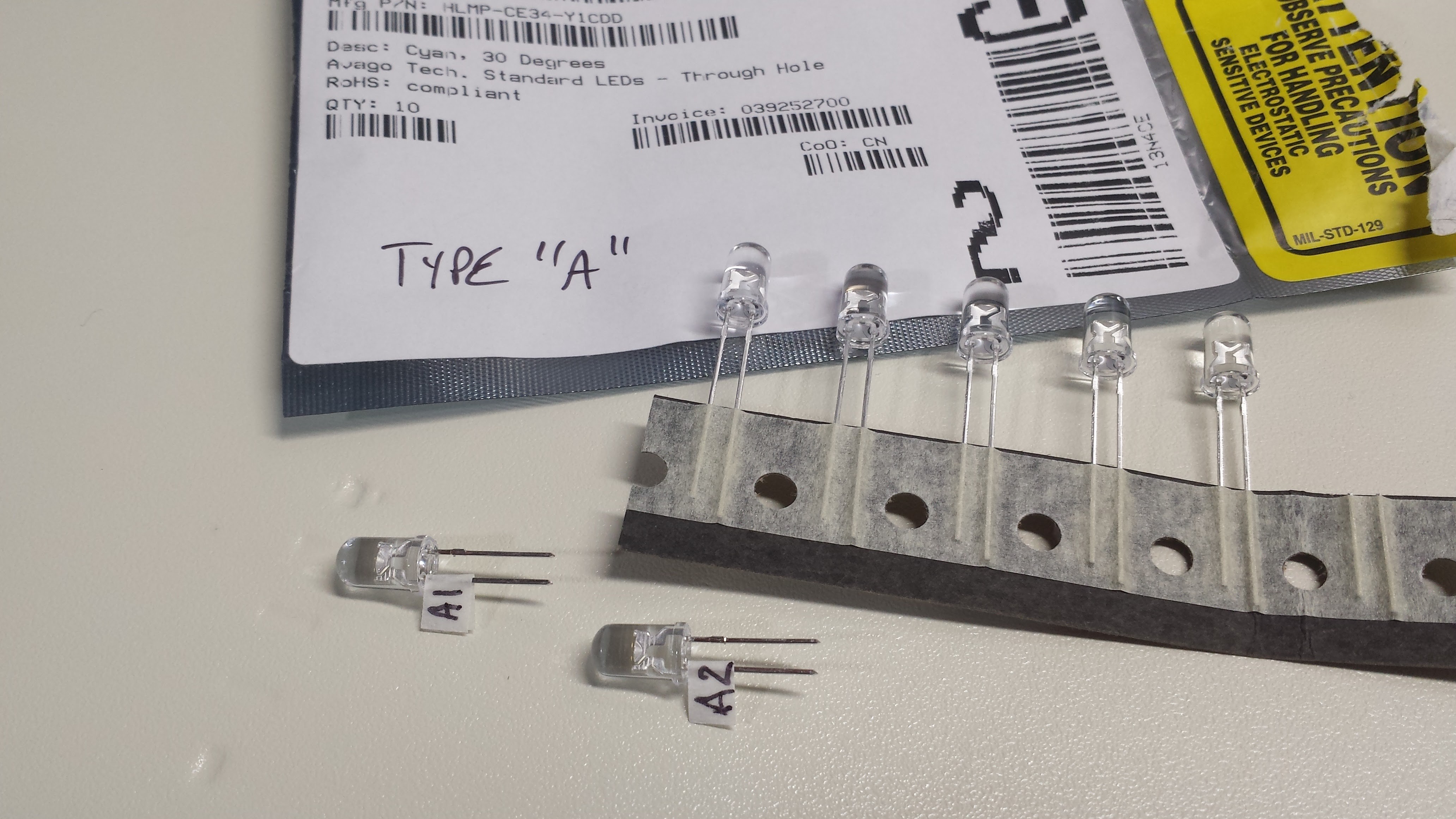 Running a sweep in the analyzer takes a few minutes for each LED, so it was short work to plot all of the efficiency curves: 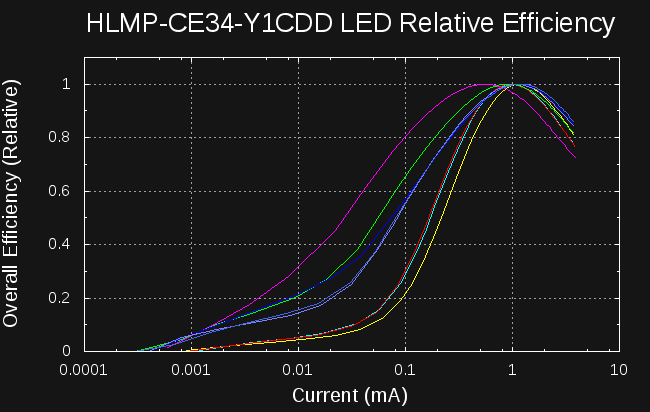 Since I am not sure how repeatable the LED/sensor optical coupling in the scanner is yet, all of these curves are normalized to have their peak at 1.0. It could be that some of them are more or less absolutely efficient, but at least we can see how we would do choosing a single current for driving any of them. It's not a bad cluster, with the exception of the magenta curve (LED A2), which peaks a little low. Even so, if we chose 1 mA to drive any of these LEDs, A2 would still be at 95% of its peak efficiency.

I think it makes sense to run some curves like this with any candidate LEDs. Unfortunately, most of the LEDs I've been looking at have to be surface-mounted, so I need a board for each sample. I guess I can initially evaluate a single sample of each type of LED to narrow down the field, then have 10 cheap boards made to evaluate the spread for a few candidate parts.

I found some LEDs claiming 490 nm output (very close to the dark adapted peak) on ebay. These are "3W" units, similar in power to the Luxeon Z I have been using, but cost around $0.80 each:

They claim a 120-degree viewing angle, which is the same as the Luxeon Z. I can't wait for them to arrive so I can test them. They're also hand-solderable.

Thats an interesting idea.  Thanks!  I'll have to check if any of them are magnetic.  I know most SMD capacitors are: I had to buy some special non-magnetic ones for my magnetic field probe (different project).

If it doesn't work, I can probably get this size board for under a dollar each; on a $2 or $3 LED, it's not too bad for testing.

Yep, sockets for through-hole make sense: I built a 4-wire Kelvin-connection socket for through-hole LEDs (didn't write it up yet, though).  I'm trying to make decent SPICE models, and want to be able to get a good estimate of the series resistance. 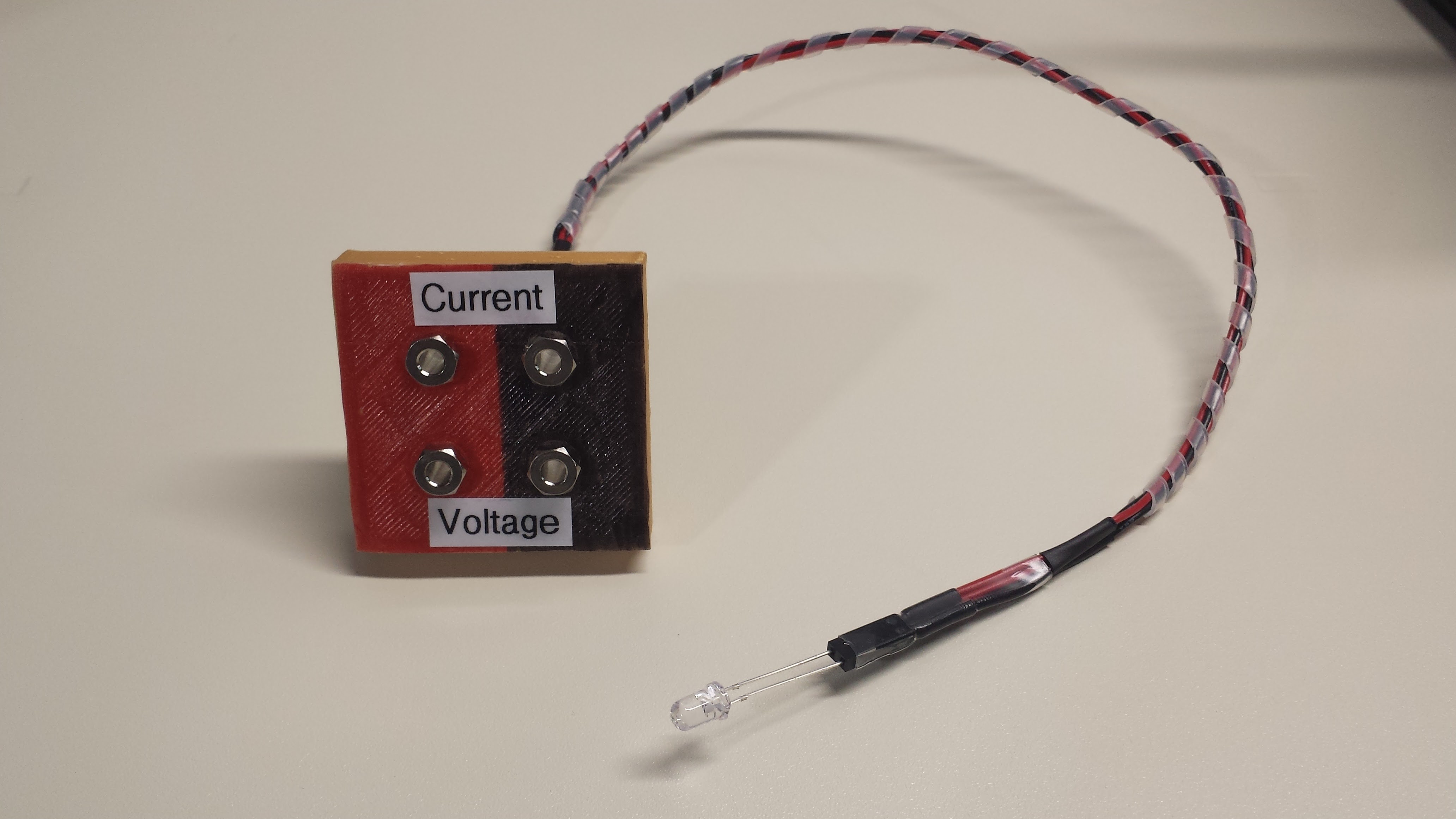 Before you go soldering the SMD LEDs, consider attaching (glue, tape) a rare-earth magnet to the other side of the PCB, centered on the footprint (making sure to isolate it from any exposed traces/vias). Some LED packages are (apparently) ferromagnetic. I haven't tried this myself, but I've seen LED testers which use this technique. Not sure how good a connection you'd get, but it seems worth testing.

Similarly, a SIP socket or female header might work for through-hole devices.