I found some time to "follow the energy" in the V2.2 design using a PCB designed just for testing.  The interesting addition to the circuit is a 1-ohm resistor in series with the LED:

The resistor allows the LED current waveform to be captured on the scope.  A second channel captures the voltage across the LED, while a BPW34 photodiode near the LED monitors the actual light output.    The 50-ohm shunt resistance is important to speed the response of the photodiode.  Note the unusual connection of the scope ground - this requires a floating scope, in this case created by running the TritiLED from a 12V battery and an LM317 adjustable regulator to supply 3.00 V.

The resistor does waste a small amount of power (calculated below), but doesn't affect the results very much.

The signal from the BPW34 is not calibrated, but is just used for triggering and to see exactly when the LED is emitting - this resolved the question of whether the LED actually emits any light during the ringing after the pulse.  It doesn't.

All measurements were taken with 3.00V supply and a 2-pulse program from the GitHub source code.  The inductor has a 30% tolerance, so these measurements should be considered "typical" in the datasheet sense - meaning I saw this once in the lab :-)

I measured the current consumption at 13.54 uA without the scope connected.  This increases to 13.96 uA with the probes connected.  I don't know exactly how to treat this difference, so I have expressed the efficiency estimates in a range below, assuming one or the other current as a reference.

Here are the waveforms from the three channels.  You can see the two pulses that happen at a nominal 62.5 Hz: 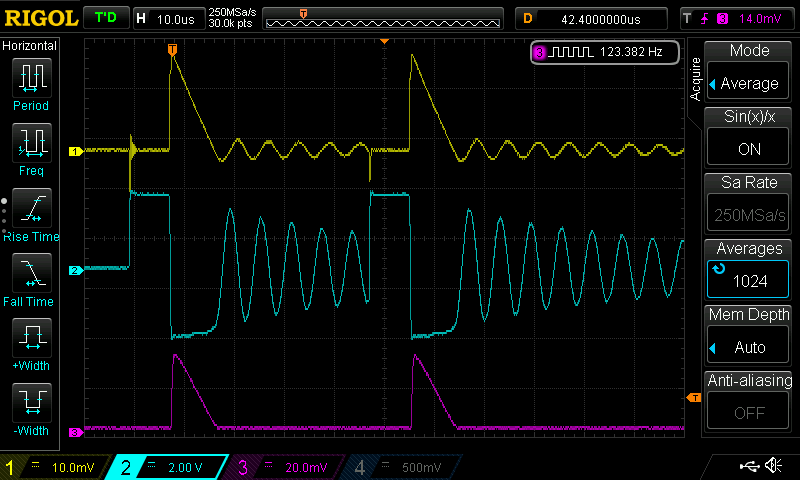 The top (yellow) trace is the LED current (1mV = 1mA).  The peak is about 19.8 mA.  The middle (cyan) trace is the voltage across the led: note that this voltage is inverted, so the LED is lit on the "low" section of the trace.  The bottom (magenta) trace is the light detected by the BPW34.

Please make sure these calculations all make sense.  They went pretty quickly, so I may have missed something.

This also means that even if you succeed in driving the oscillator current to *zero*, you can only improve the run-time (or brightness) by 22/78 = 28%.  So instead of a 2.5 year light, you get a 3.2-year light. Probably not worth increasing the cost to do, but sure, I'll take 28% more of anything.

Overall, 70% doesn't seem too bad.  You see optimized DC-DC converters at 95% sometimes under ideal conditions, but for such a simple circuit, it seems OK.  You're not going to be able to double the run-time again.

A similar numerical integration of I^2R in octave shows that the sense resistor is consuming 0.37% of the power.  That's in the noise as far as this rough analysis is concerned.

What's more interesting is this gives us a way to estimate the loss due to the (nominal) 5-ohm resistance in the inductor.  Since the inductor wastes energy during both the charge and discharge parts of the pulse, there's a factor of 2x as well as the 5x more resistance, so the loss is roughly 3.7% of the total power.

I had been thinking that the lousy inductor was hurting efficiency, but the PIC wastes about 6x as much.

So, the PIC uses 22%, the LED 70%, the inductor and sense resistor together another 4%, totaling 96%.  The 100R protection resistor consumes less than 0.05%, so there's another 4% going somewhere. I'm willing to accept that as just experimental error in this rough analysis.

The overall efficiency seems OK at 70%.  If this were a commercial product, I'm sure it would have been out the door already (assuming the cost was OK).  To tweak it further, the oscillator (currently PIC) is the best thing to work on, followed not very closely by the inductor.

If you go to 1 pulse per wake-up, the PIC consumes a larger percentage, so the overall efficiency actually goes down as the brightness decreases and the run-time is extended.  Increasing to 3 or more pulses will increase overall efficiency as well as brightness, but decrease run-time.  I'll do some more measurements and make a model for this.

At this point, reducing size and cost seem more interesting than further increases in efficiency.  I'd take a win-win-win, though...

A Quick One: Tapped Inductors