A little upgrade, Orange Pi One case and time for a total rebuild

I've decided that I need to post any progress I make on anything as soon as I do it or it'll get buried in the mounting terabytes of stuff I wanna post and make, so here's a little something from today and everything you've missed.

First, I added a fan. Quite some time ago too, probably a week after it was "Done". 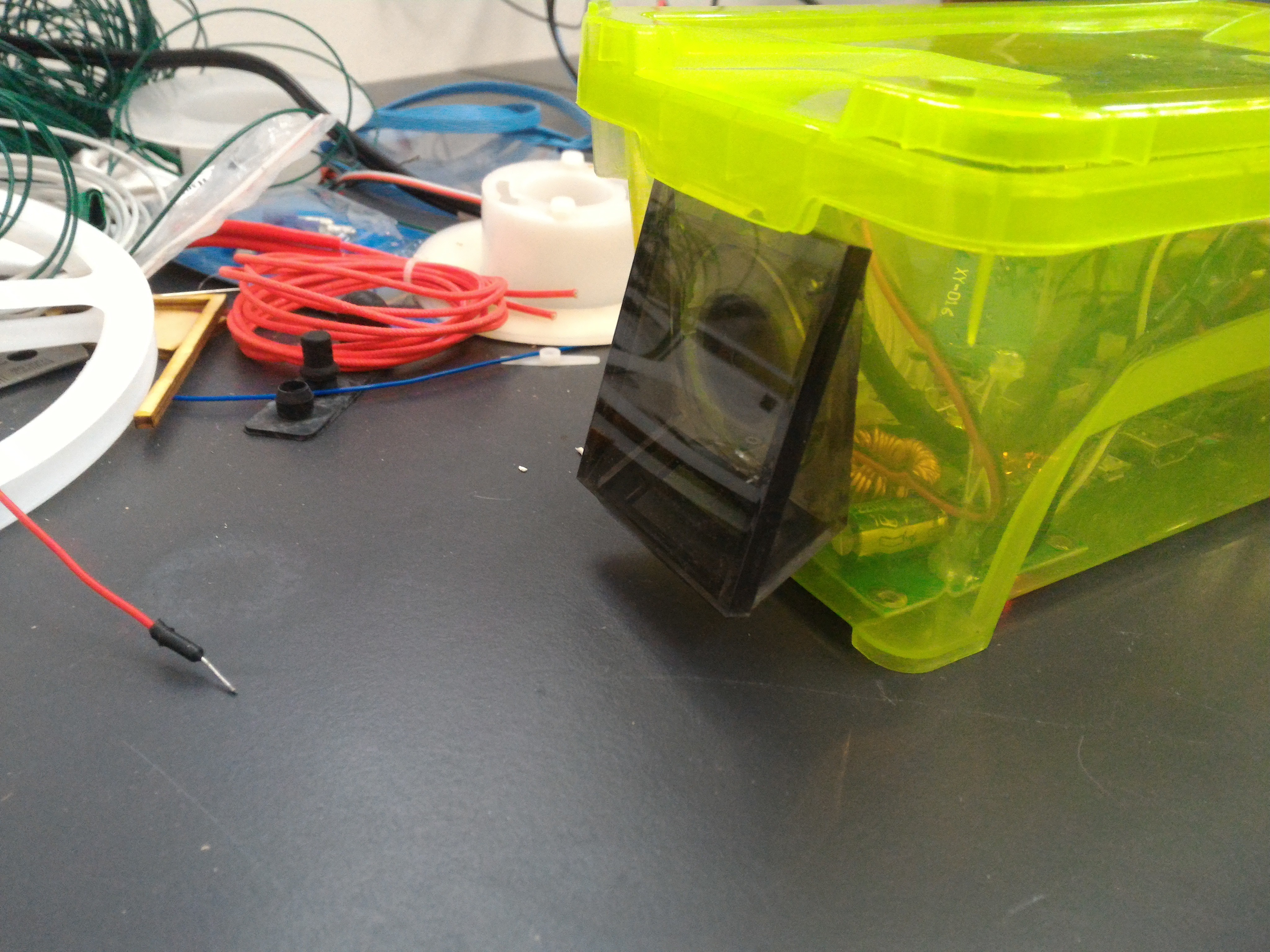 The orange pi inside got pretty hot, to the point where, despite a massive airgap, whatever the box was sitting on got very warm. A RPi heatsink and a fan on the back fixed this.

(I think I'll just call this whole thing a box from now on. (OOOOOHHH, awesome idea for a case to add to the list: A black jiffy box with a blinking red LED on the top. Probs gotta have built in battery then. I really should just rename this project to "All the things I'm shoving orange pi's in")).

The fan just runs off the 12v booster, I put it on the side with a little cover so the saliva of people standing around it salivating doesn't get inside. I've bathed this entire unit in Isopropyl once already...

There's no output for the air, there's enough gaps in the lid already.

The second little tweak, something I did today after getting back from work and not having my little RCA power plug, was say bother it and give it power from a 12v PCIe connector. 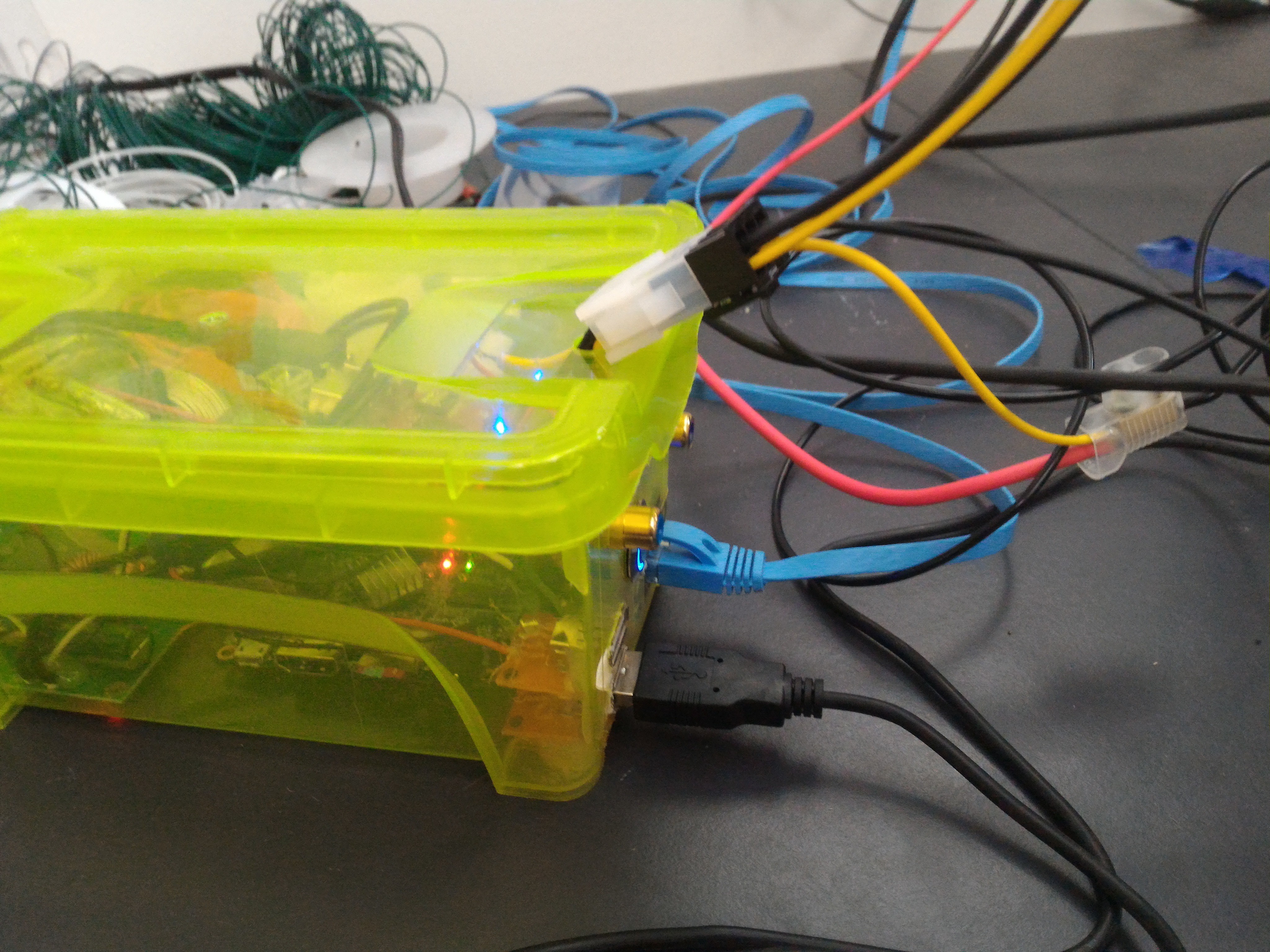 Let me explain; I've become pretty fond of powering stuff through standard power supply connectors recently, the four pin molex or sata for a nice mix of 12 and 5v, or a pcie connector when you just want umph. I would have rathered put this on sata but I didn't have a spare cable at hand.

Anyway, I've basically just been buying up female/male sata/molex/pcie to female/male sata/molex/pcie cables to give me a tonne of different options, male and female for all my projects (like a little algae bioreactor I'll be posting soon). It lets me run stuff off my solar system at work, and when I bring stuff home I can just plug it into one of the spare connectors on my PSU (Seasonics work as great makeshift bench power supplies).

It kinda suits that it's 12V only, as this box only needs 12v in anyway, that's the beauty of it. No regreats.

Speaking of ragrets, here's one:

Of the two RCA eyes on the thing, one's had its cables snapped off on the inside for quite a while now. Naturally, I decided the best way to route the pcie power connector was just do drill a hole in the lid, slide the cable through, and solder it, permanently affixing the lid to the box. It would have been much wiser to just unscrew one of the eyes and run it out there. Lid free, no stressed cables. Yay me.

Oh, and one last thing:
This little box is just too unclean and looks like garbage compared to the other stuff I'm working on. I just wanna start from scratch. Actually, because it's at work, and, at work, I'm taking up desk space with algae growing equipment, I wanna integrate it all into the base of one of my algae bioreactors, so I might just gut this little thing (the router and the pi, I'll just buy more of the rest).

Oh, what I was actually gonna say was I made this case for the orange pi one a week back. It's cute and I like it, but maybe not for work. I might make a scaled up version that holds everything in soma box thing #1 sometime.