I'm taking advantage of a four day weekend by doing a series of tests, eventually building up to a hover test. I'll be updating this post over the weekend as I make progress towards the hover test.  I plan on sharing whatever happens good or bad, and since these things seem to never go according to plan, please be patient if it seems like it's taking too long or nothing happens at all.

As  I laid out in the last post, Today (Friday) the plan is:

So the weather this weekend does not look good.  Today (Friday) is an 80% chance of rain, Saturday 90 %, Sunday 80% and Monday is 40%.  Things might slip a bit.  I was running out of room in the workshop to actually work on the vehicle with the rotors attached so I moved it outside under a pop-up canopy to get the last two rotors attached.  I have them attached, but I'm still adjusting all of the pulleys to make sure they are all aligned.  It started raining so I lowered the shade to cover Goliath better and waiting for a break in the rain.  I did get one other important item installed (below). I got my T-Shirt this week from the "Astronaut Or Not" Challenge, specifically the "Most Outrageous Component" round.  They also sent included a few stickers, one of which is now placed on the engine.

So the rain let up for a while and I was able to finish adjusting the pulleys and belts.  Goliath is finally starting to look like a quadcopter. Next step is getting ready to remotely start the engine.  Previously I had connected an riding lawn mower ignition switch to Goliath for testing out the starter and other hardware.  Later the ignition will be controlled with the Pixhawk controller, but for doing some preliminary testing.  I need to start the vehicle remotely for safety reasons, so I rigged up an extension for the ignition. Last step is making sure Goliath isn't going to go anywhere while just running the starter.  I'll get more serious with ties down for the hover test. With all those things done, it was time to try it out.

Everything seemed to work as expected, so everything looks good for running the engine on gas next.

So after meeting all the goals on Friday, Saturday did not go as well.  The first part of the day was doing a bit more research into the Pixhawk controller.  I'd like to have the Pixhawk included as part of the hover test and I'm working on making sure I have everything I need.  Turns out I misunderstood some of the documentation on the Pixhawk.  While the Pixhawk has 8 main and 6 aux PWM outputs, the Pixhawk does NOT provide power for servos.

To power servos off the Pixhawk, a BEC needs to be connected to one of the servo inputs to provide power to the rest.  So this morning I called around and got a Castle 10AMP BEC that will convert the voltage from the 12 V Battery currently on Goliath to what the servos need.  This will be in addition to the Voltage Converter that powers the rest of the Pixhawk.

After making a trip to the Hobby Shop, I got ready for today's testing.  First thing was getting the fuel solenoid tied in to the ignition switch.  After that I connected a temporary gas setup consisting of nothing more than a 1 gallon gas can with 1/4" tubing shoved in it and taped off. 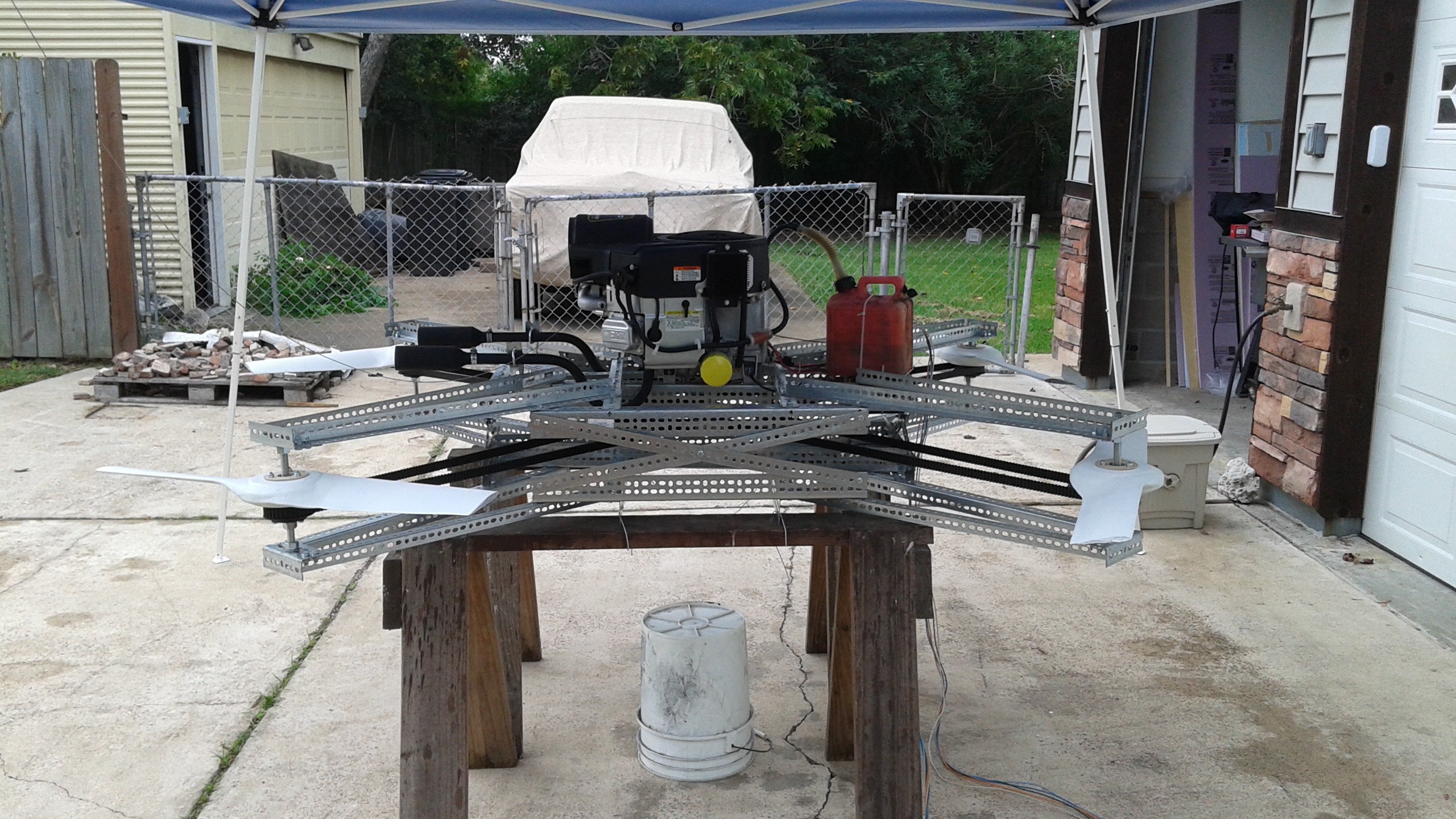 I had wanted to keep the gas separate from the rest of the vehicle, and it was setup underneath at first, knowing that the change in height might be too much for the fuel pump.  However after turning the engine over several times it was obvious the fuel wasn't reaching the engine.  The engine comes equipped with a clear fuel filter case and the gas got to the fuel filter and stopped.  Once the gas can was place on top of the vehicle, the fuel flowed freely though the filter.

Several attempts were made to start the engine, but the engine never fired.  The connections were checked, but nothing seemed to work.  Eventually the battery got low, so the battery charger was connected to recharge it.  It could be that the long wires for the ignition extension are the problem.  Sunday I'll have to get the voltage meter out and do some testing.

While waiting for Goliath to recharge I did get some time to start prototyping the throttle servo bracket out of some scrap aluminum sheet.  It's an OK start but I need to find a spot on the frame or engine to connect to the top of the bracket to make it more secure. Hopefully it won't take too much more work on Sunday to get the engine figured out and still get the hover test completed this weekend.

I had to do some office work this morning, so I got a late start today.  It's raining so I'm working adding some of the electrical needed for the final design, starting with having a master switch and fuse, along with a mini fuse box for the different systems.

The good news is that we haven't had to use the fire extinguisher so far, but the engine still isn't starting.  I took advantage of the rain to do some rewiring.  After yesterday's testing, I suspected that the long wires used for the ignition extension was the culprit so I worked on rewiring so that some of the components weren't wired through the ignition extension.

The first thing I did was add a master electrical switch and a power box.  This lets me know that I can turn everything off in the system and easily isolate different components.  Currently the alternator and ignition are wired trough the box and they are connected when the master switch is enabled. 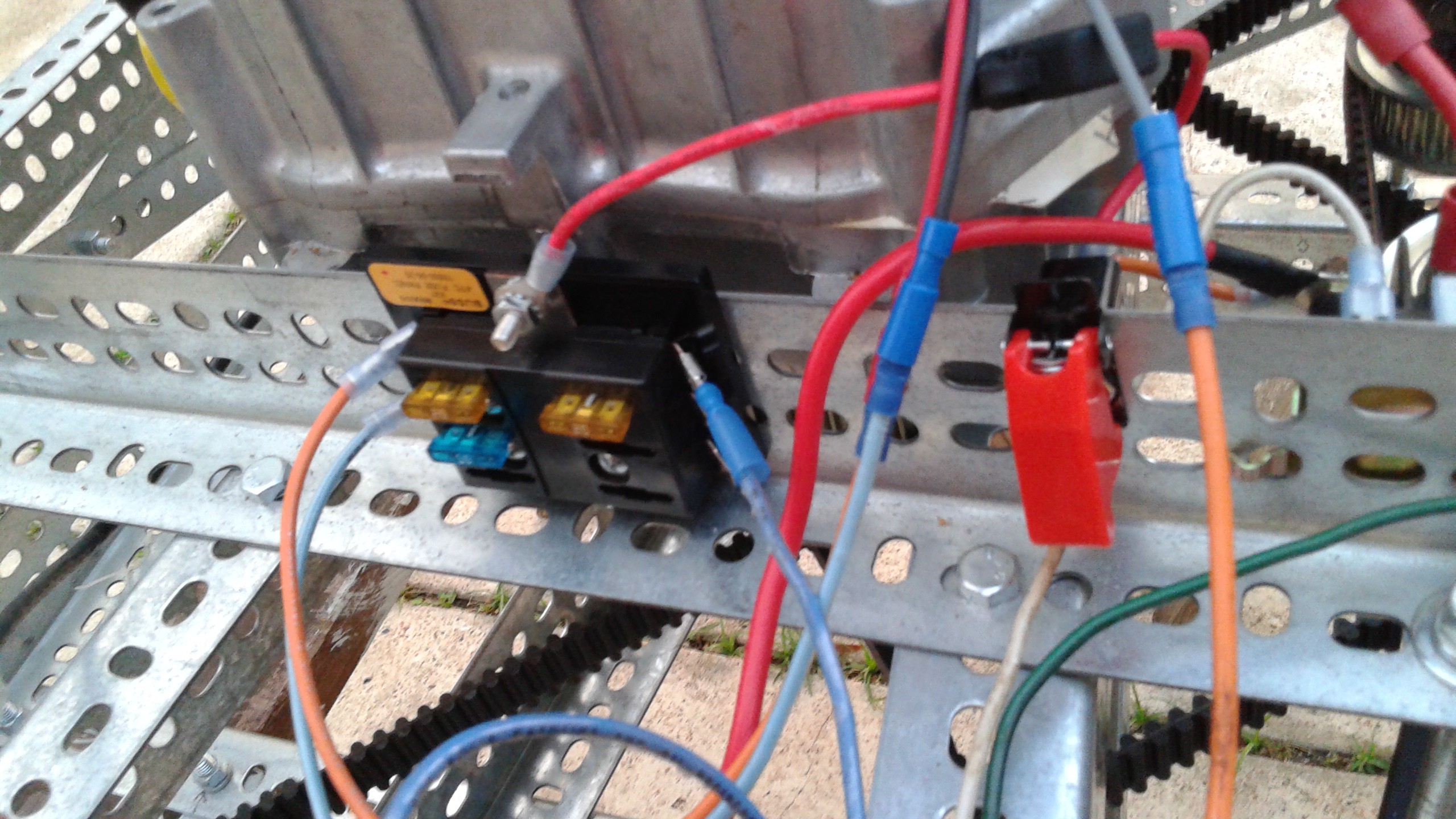 The fuel solenoid and starter are still wired through the remote ignition, which can only be used if the master switch is on.  To make sure the fuel solenoid was working I removed the solenoid and visually checked to see if it actuated when the switch was enabled.  It did activate and when I removed it, gas poured out of the carburetor, so I'm confident fuel is getting to the engine. 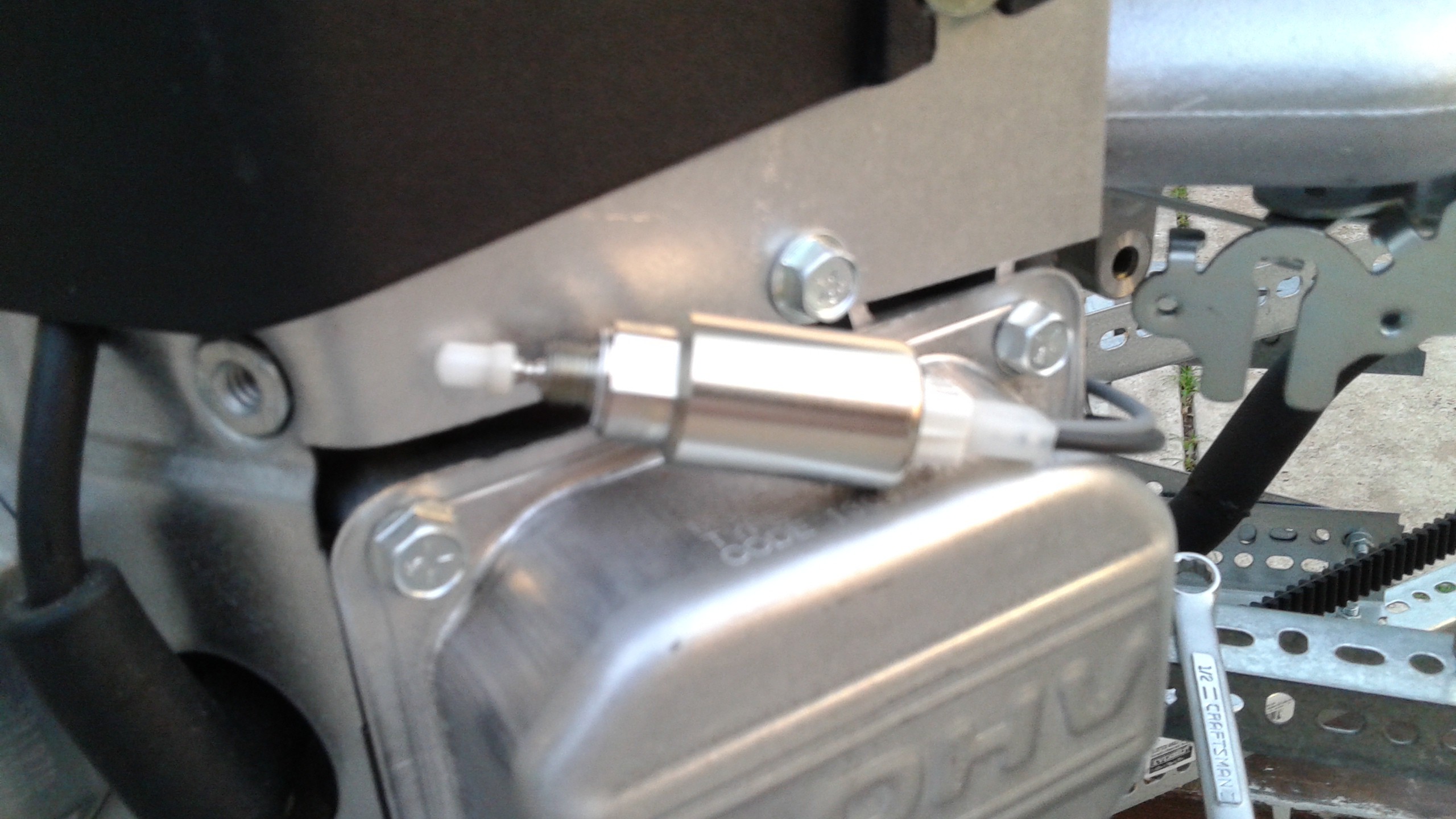 The rain cleared out for a little bit to try starting it up a few times again, but it didn't start.  There isn't any sputtering, it just turns over without making any other sounds.

Right now I suspect that the ignition is not working correctly.  There seems to be a slight acrid smell after the electronics have been powered on for a minute or two.  It could be the ignition coils, but I'm not sure.  If anyone has any experience with starting a brand new engine like this or if you have any ideas, I'd love to hear from you. So the afternoon was rather eventful.  The problem with the engine appears to have been fouled spark plugs (though I don't have an idea how new plugs could be fouled).  The engine started up strong and came up to speed quickly. After a few seconds I shut it off, but one of the belts appeared to lose tension and the blades got caught and two of the propellers broke. Attached is some video. Note, the startup seems to have been cut off, and while in the video the propellers seem to spin backwards, it's likely an artifact of the video capture speed.  I'll post more details later when I get things sorted out.

Picking up the Pieces

zakqwy wrote 09/02/2014 at 02:34 • point
Looks like a solid start! Glad the engine seems to be working. I have a feeling that you're going to get really good at making propellers. Not a bad thing.